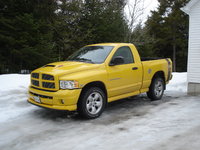 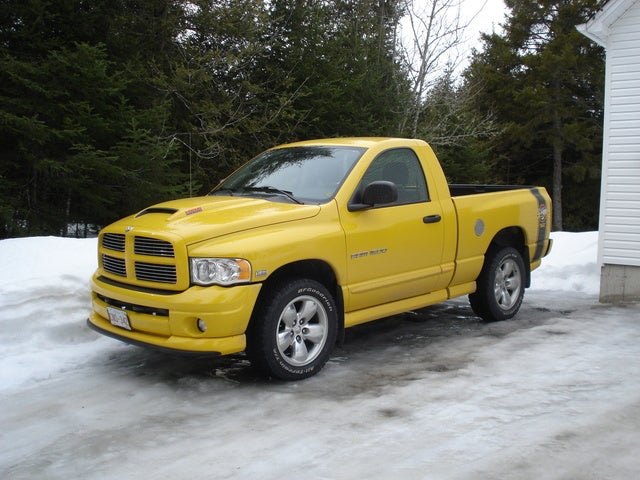 The Dodge Ram 1500 is good looking and a solid performer. 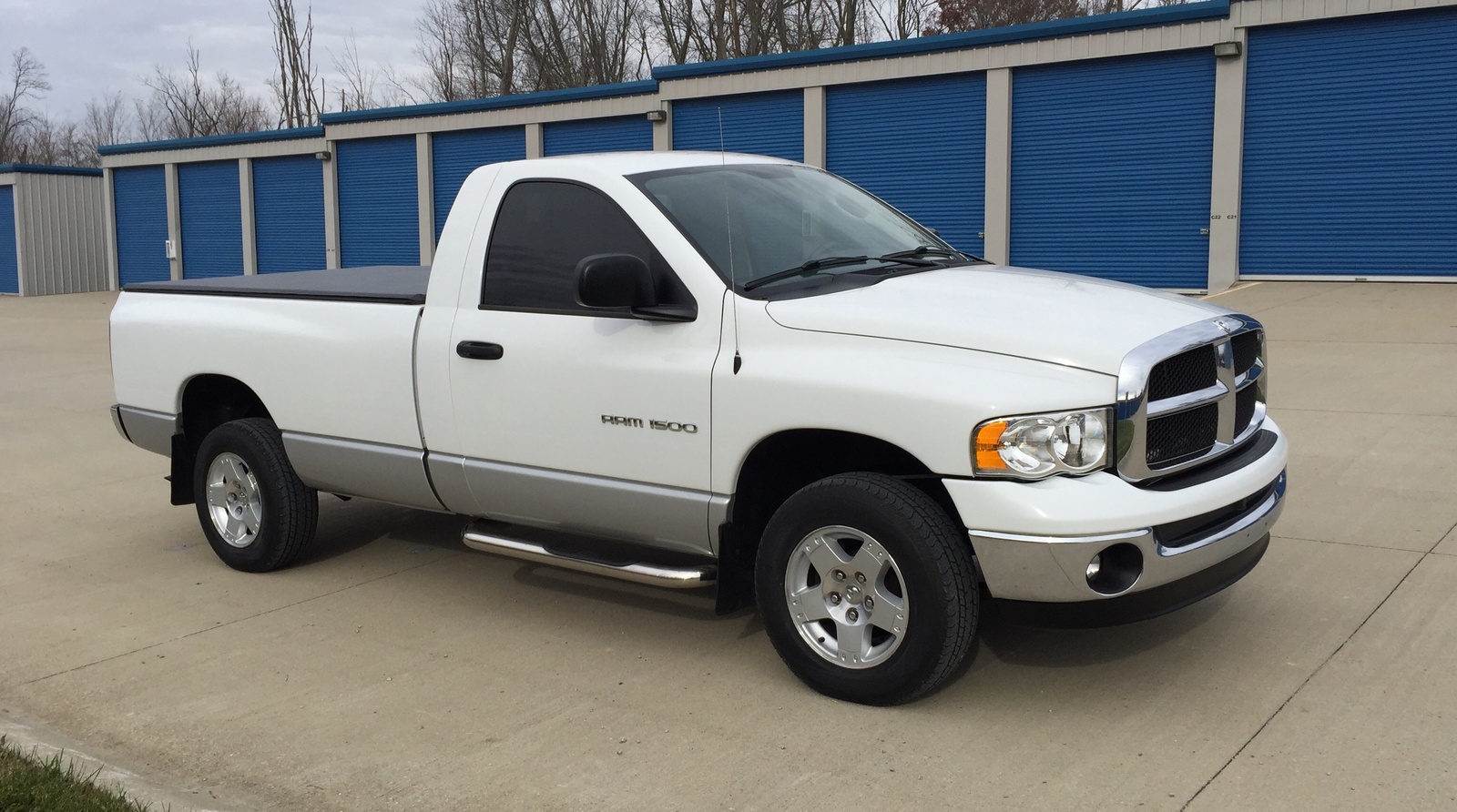 The Dodge Ram is one of the most recognizable vehicles on the road today, and certainly has notable exterior styling, thanks to its crosshairs-style grille and bulbous hood that rests on top of bulging fenders. The styling has been in place since the early 1990s, and the 2002 redesign kept the majority of the style in place. It's an excellent truck with plenty of virtues to draw in truck buyers, but the full-size segment has heated up to the point that it’s hard to find a bad apple. 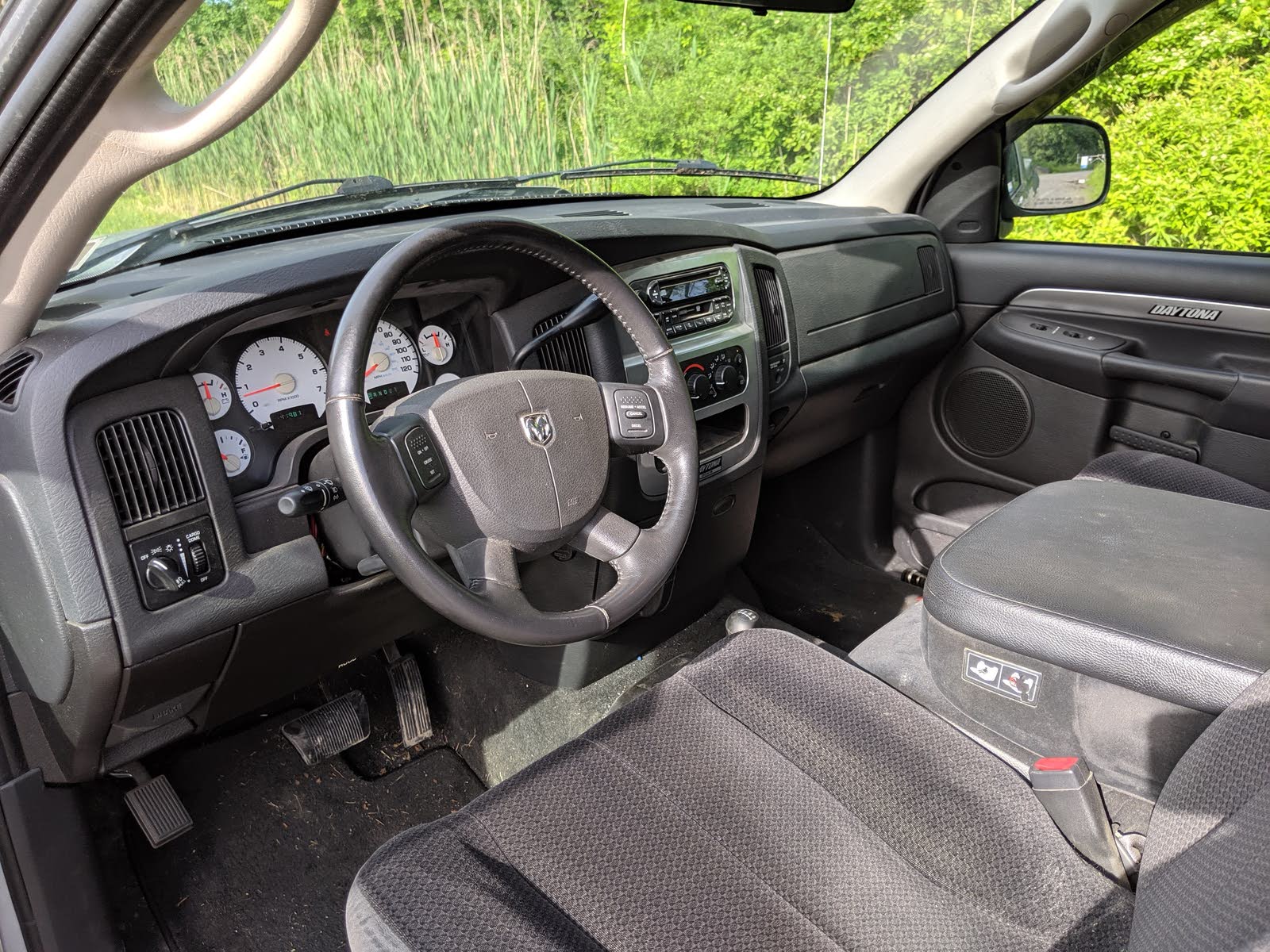 Now three years into its third generation, the Dodge Ram 1500 is due for a facelift soon. Even so, it’s got the looks, refinement, and comfort to keep up with the best offerings from its fellow Big Three competition at Ford and Chevy.

The Ram 1500 became a sales success for Dodge after its redesign for the 2002 model year, and the numbers remain strong today. That update brought independent front suspension for four-wheel-drive models and an all-new frame.

The Ram also joined the realm of high-performance trucks with its SRT-10 model, available in both Quad Cab and Regular Cab configurations for 2005. With impressive power on tap from its Viper-sourced V10, the SRT-10 runs and sounds like something that has no business being off of a racetrack.

Dodge sells the Ram with two cab configurations and two bed lengths: Regular Cab or Quad Cab, and either a 6’3” bed or an eight-foot bed. Four trims join the hi-po SRT-10 in the Ram lineup for 2005: ST, SLT, Laramie, and Sport. The Sport trim is more of an upgrade package for other trim levels than a standalone model of its own.

The Ram 1500 is aimed at new car buyers that want a full-size pickup truck with plenty of cabin space and capability. It competes with the Ford F-150, Chevrolet Silverado, GMC Sierra, and to a lesser degree, the Toyota Tundra.

The most recent trucks have a smoother, more streamlined appearance, but retain a brawny stance. The large hood slopes down to the fenders on either side, while a swept-back cab shape gives the Ram a sleek, modern appearance.

Inside, the Ram’s materials and build quality are good overall, but fake wood and cheap-feeling plastics make themselves known in ways too numerous to list here. The standard bench-style front seat is split 40/20/40, and the large fold-down armrest is big enough to hold large books, purses, and even laptop computers.

The Ram’s dash is clean, though Dodge could have chosen a better color combination for its gauge cluster. White gauges with blue/turquoise text look clever in bright daylight, but things get washed out in lower light conditions before headlights are needed. Everything else in the dash has been designed with usability in mind, and most controls are large enough to be used with gloves on. The center dash area has a large folding panel that reveals adjustable cupholders, and a cubby below the climate controls is large enough for a wallet or mobile phone. 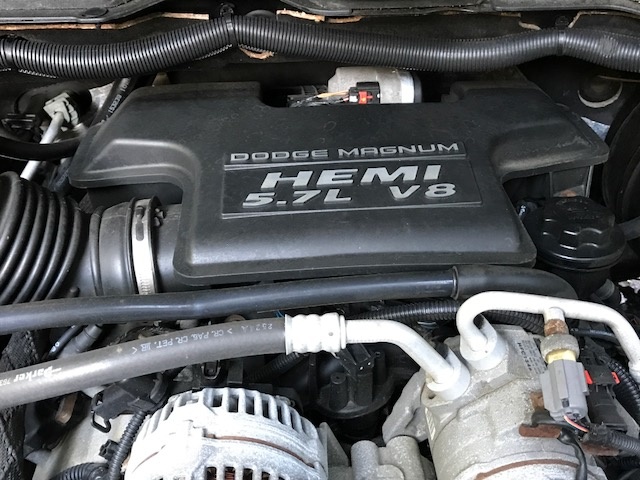 In its most basic form, the Ram 1500’s 3.7-liter V6 powertrain provides enough power for anyone not needing to tow large loads, though it will leave many buyers wanting for more “grunt”. The engine is responsive and smooth, and pairs well with the standard six-speed manual gearbox.

Step up a level to the most popular engine, the 4.7-liter V8, and you get 240 horsepower and a delightful big-engine sound. The V8 is refined and smooth under load, and extremely responsive when paired with the optional five-speed automatic transmission.

The 5.7-liter Hemi V8 is new and makes the Ram sound like a true muscle car. The engine makes 345 horsepower and 375 pound-feet of torque and comes paired with a new five-speed automatic gearbox. Any hint of urgency from the driver creates a wondrous sound and impressive acceleration from a truck. That’s on top of the fact that the Hemi can increase the Ram’s towing numbers to 9,200 pounds while returning up to 18 mpg on the highway with two-wheel drive. Off-road performance gets a boost from the Hemi, too, as the extra torque and power are helpful in the mud.

The SRT-10 is where the specs heat up considerably. The Viper-sourced 8.3-liter V10 won’t win any fuel economy competitions, but it’ll help the Ram scorch its back tires in nearly any situation. At higher RPMs, the SRT-10 screams every bit as convincingly as a Viper at full throttle. The truck is perfectly happy cruising around town doing errand duty, but a quick romp on the throttle quickly changes its demeanor into a fire breathing dragon of a pickup. All of that was good enough for The Guinness Book of World Records to name the SRT-10 the world’s fastest pickup.

The Dodge Ram pickup’s ride quality is controlled and pleasant, but it’s a big truck and absolutely feels that way, especially on narrow roads or on crowded city streets. The long wheelbase makes for a great truck but doesn’t do the Ram any favors in terms of maneuverability. Dodge uses hydroforming to shape the frame, which blasts ultra-high-pressure water into the metal to shape it instead of using welded pieces. That creates a much more rigid frame that contributes greatly to the Ram’s nice ride quality.

Fuel economy, depending on the engine, can either be decent or abysmal, with not much in between. The six-cylinder engine is good for 14/16/20 mpg city/hwy/combined with a manual transmission and loses one mpg on the highway with an automatic. 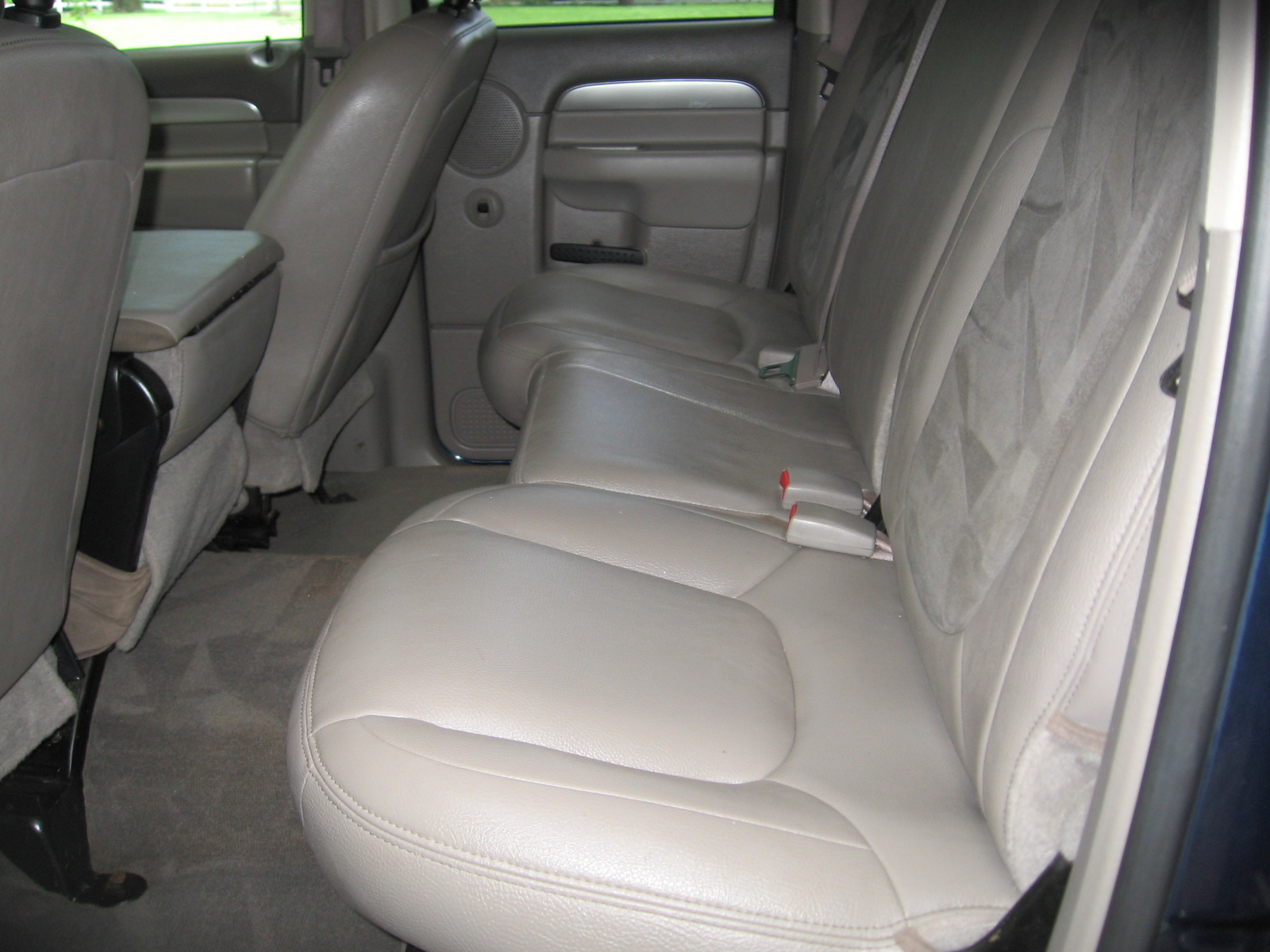 While it lags its American competition in sales, the Ram is every bit as usable for the “truck stuff”, and its tidy ride may make it more usable for many buyers. The V6 is smooth and economical but lacks the towing and payload capacities to make it a real contender in the full-size truck world.

The 5.7-liter Hemi V8 will likely represent a sweet spot for most buyers, as it brings formidable towing capabilities to the table, along with healthy acceleration and a muscular sound.

The ST trim, as a basic work truck, is about as spartan as it comes. A cassette player, four speakers, and AM/FM radio are standard. Moving up to the SLT trim brings an in-dash CD player, but the “good stuff” is still optional. The Laramie trim brings keyless entry and a long list of luxury features, including a premium stereo. 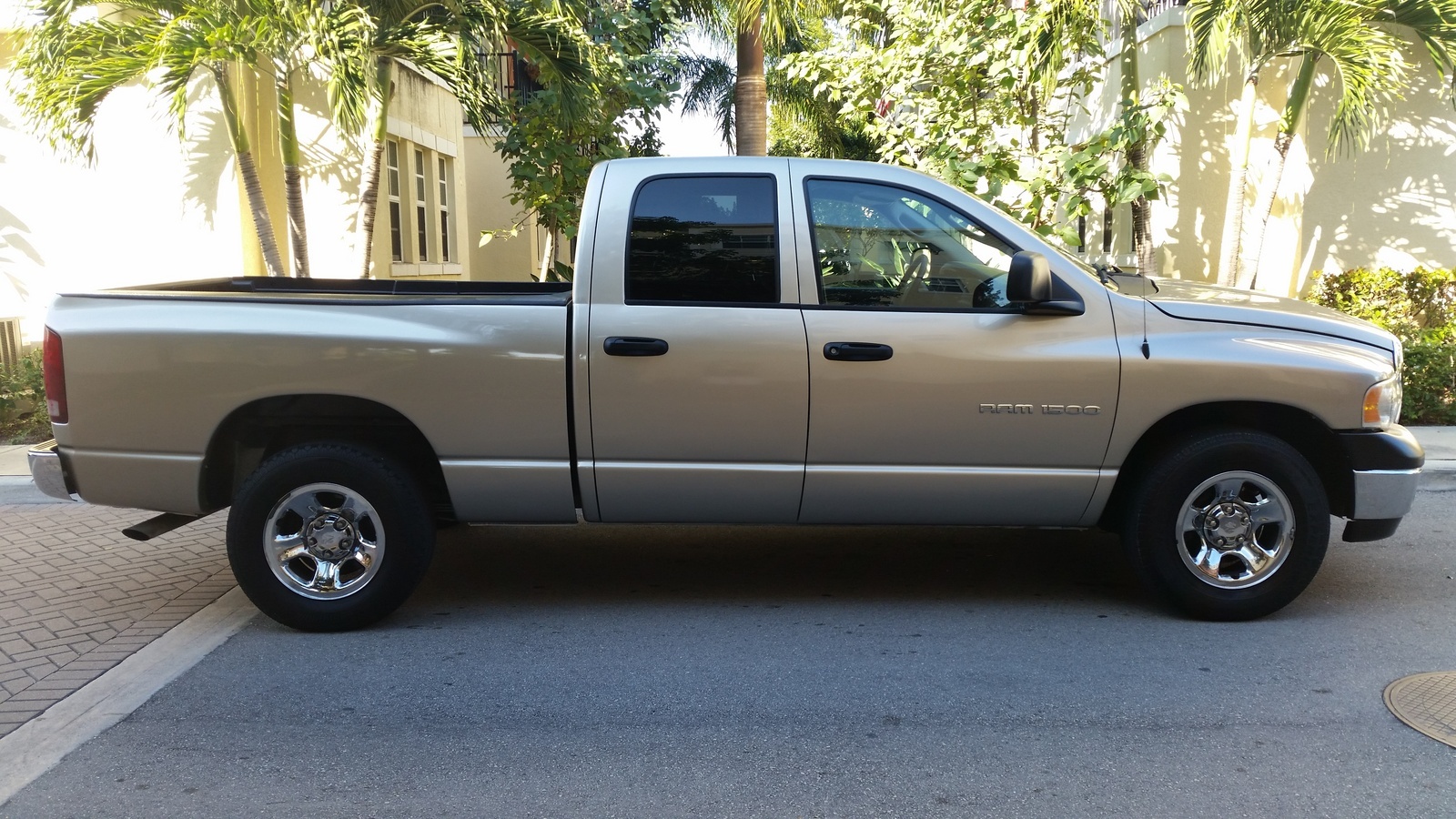 The Dodge Ram earned a Good rating for its moderate overlap front crashworthiness from the Insurance Institute for Highway Safety (IIHS), but only managed an Acceptable rating for its head restraints and seats.

The National Highway Traffic Safety Administration (NHTSA) has not yet rated the 2005 Ram 1500. 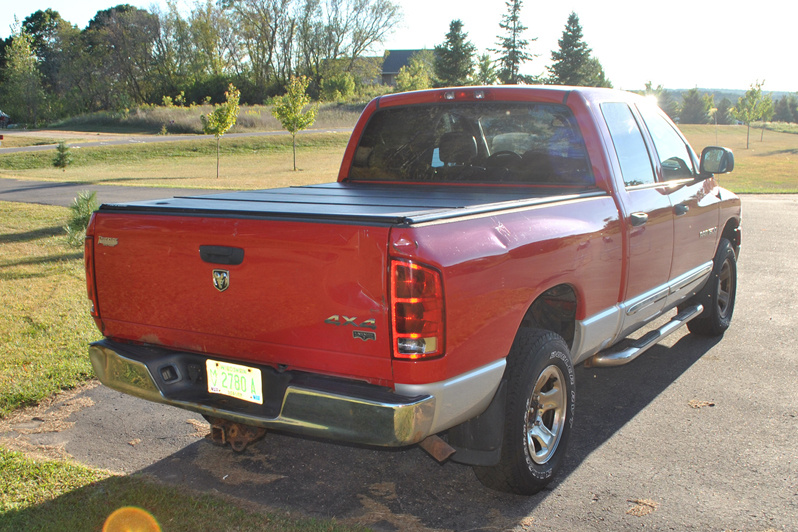 Trucks can be deceiving in their pricing, as the base models appear to be a great deal, with the price quickly rising as you start to add useful options.

The Ram 1500 ST starts at around $20,500, and while that’s a phenomenal price for a full-size pickup truck, it’s largely a work truck with few amenities. Moving up to the top Laramie trim adds a little over $10,000 to the base model’s price tag, but also adds a Hemi engine and all sorts of features. The SRT-10 is just bonkers and is probably worth whatever Dodge’s charging for them these days.

Fuel economy, while not the worst in the world, is not the Dodge Ram’s selling point. In fact, it may be a painful pill to swallow for many buyers that just want a decent pickup truck without having to stop at the pump every two days.

Knocking from rear of my truck only when moving drive shaft is not loose an changed calipers an. Brake pads, when in gear sitting still no knock

0 views with no answers yet
70

I need to replace the front Hub Assembly but prior to buying the part, they are asking if I have front and rear ABS?

HARD TO NO START

I have an 05 Dodge Ram with a 5.7 hemi 145K miles starts hard but only with the gas pedal on the floor when started runs like there is a miss in the engine. NO fault codes I have changed the cam and c...

I have a 2005 Dodge Ram 1500 4.7l quad cab. When driving upwards to 35 mph the transmission feels like it is slipping out of gear. It does not have any problems changing gears or during acceleration...

75 views with 2 answers (last answer about a month ago)