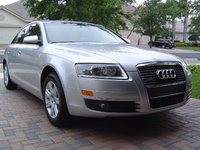 The 2005 Audi A6 is all new and has the goods to be a compelling driver’s car. 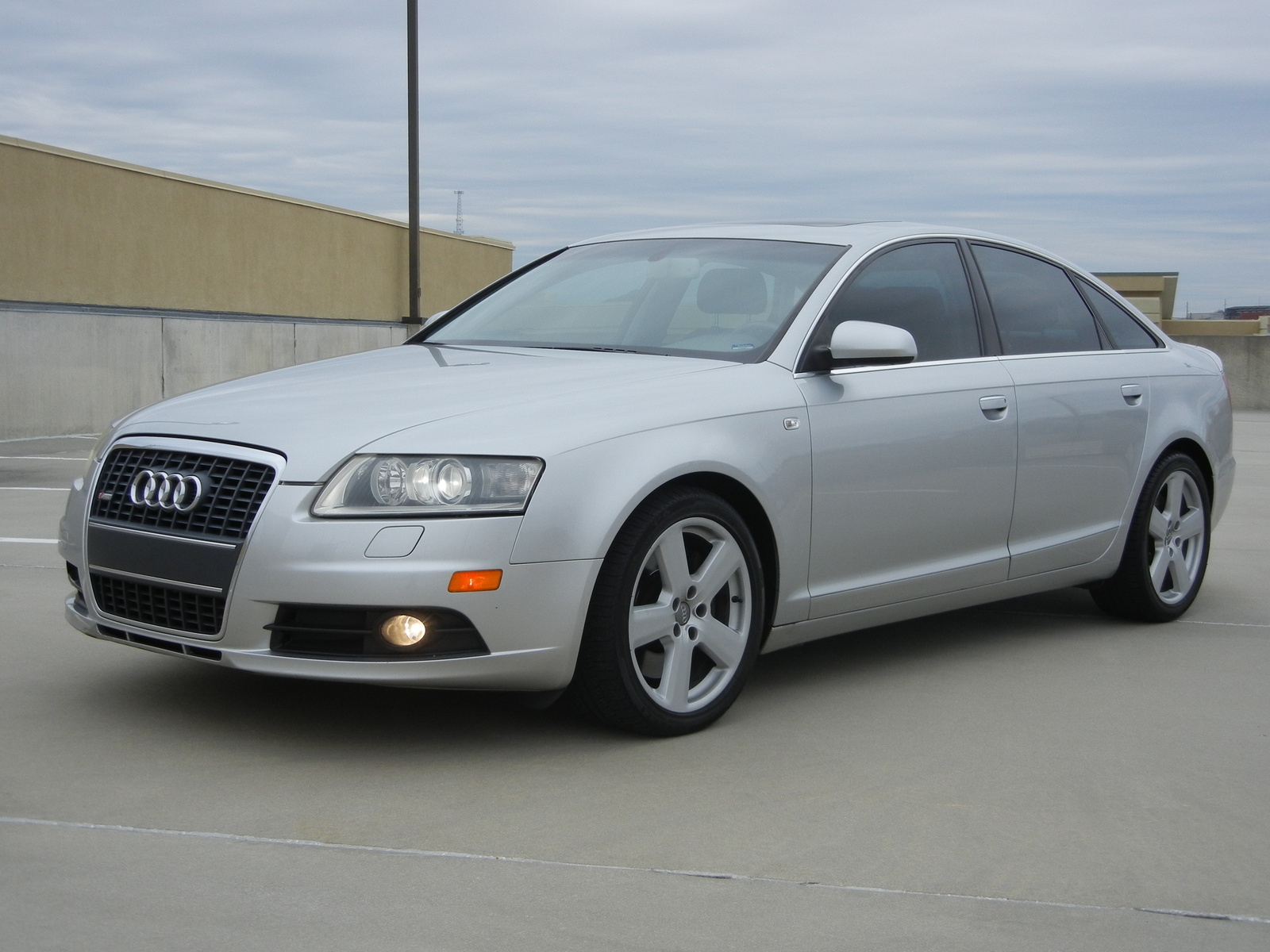 The Audi A6 is all new for the 2005 model year, and it’s got the styling, powertrains, and performance to stand up to anything else coming out of Germany these days. The new A6 is larger, faster, and better looking than its predecessor. Its longer wheelbase improves its performance as well as its style.

The 2005 Audi A6 is offered with two different engines: A 3.2-liter V6 with 255 horsepower and a 4.2-liter V8 with 345 horsepower. Both are paired with a standard six-speed Tiptronic automatic gearbox and Quattro all-wheel drive.

The A6 targets at new-car buyers wanting a sporty premium sedan. It competes with the BMW 5 Series, Volvo S80, and Mercedes-Benz E-Class. Some buyers may cross-shop the A6 against the Lexus GS as well, but it's the all-wheel drive system that will ultimately push the Audi over the top. 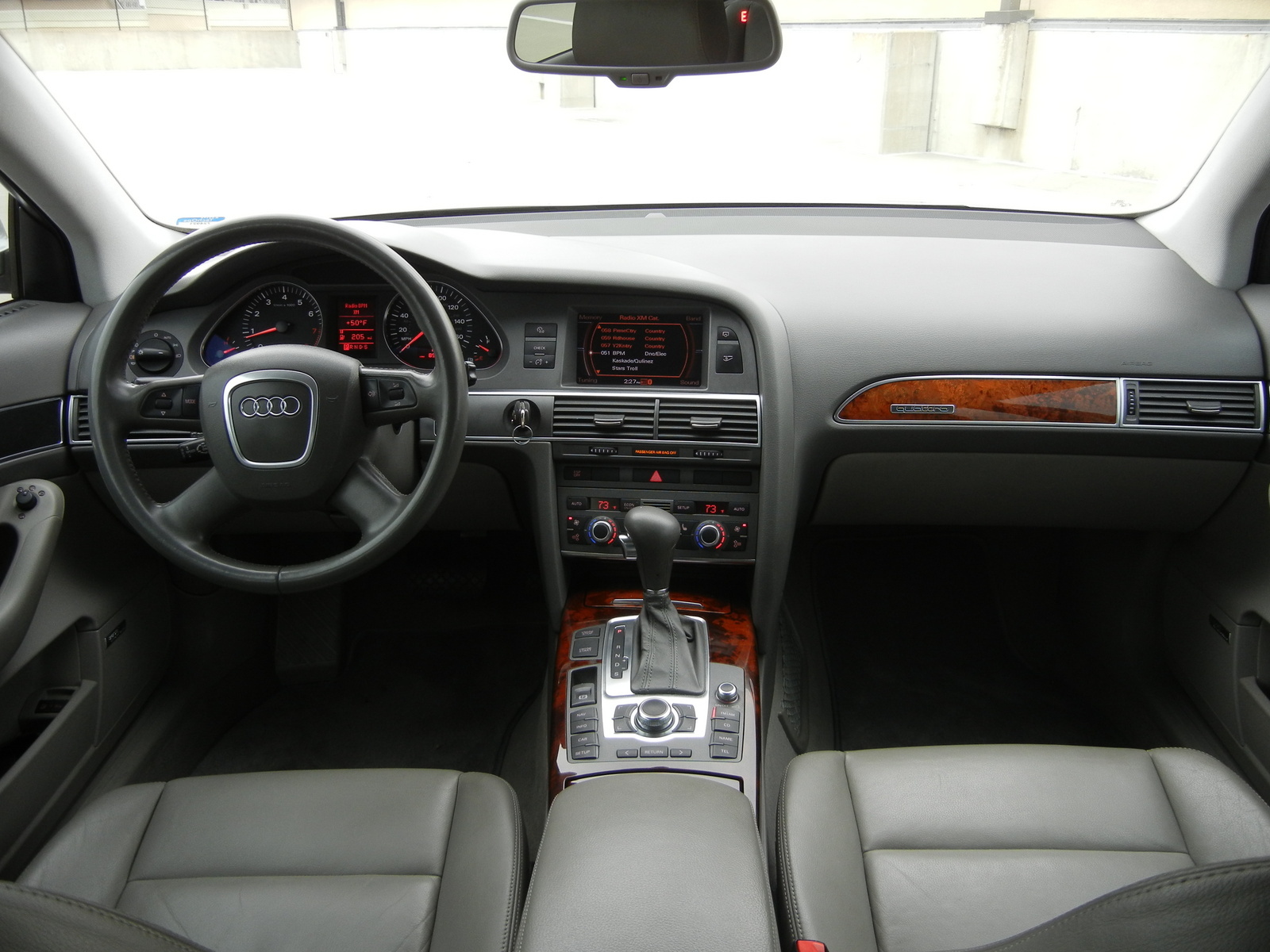 If there’s one place the A6 wins every time, it’s on styling. Audi took pains to ensure that its upscale sedan looked as good as it drove, and those efforts paid off. The A6’s all-new exterior has long, flowing, lines and a wide stance that gives it a muscular look. The new grille design is large, almost controversially so, but it fits with the car’s exterior aesthetic.

Inside, the A6’s cabin feels open and airy, even with the darker-colored leather upholstery. Optional two-tone interior trim is handsome and adds a nice contrast to the otherwise monotone cockpit. 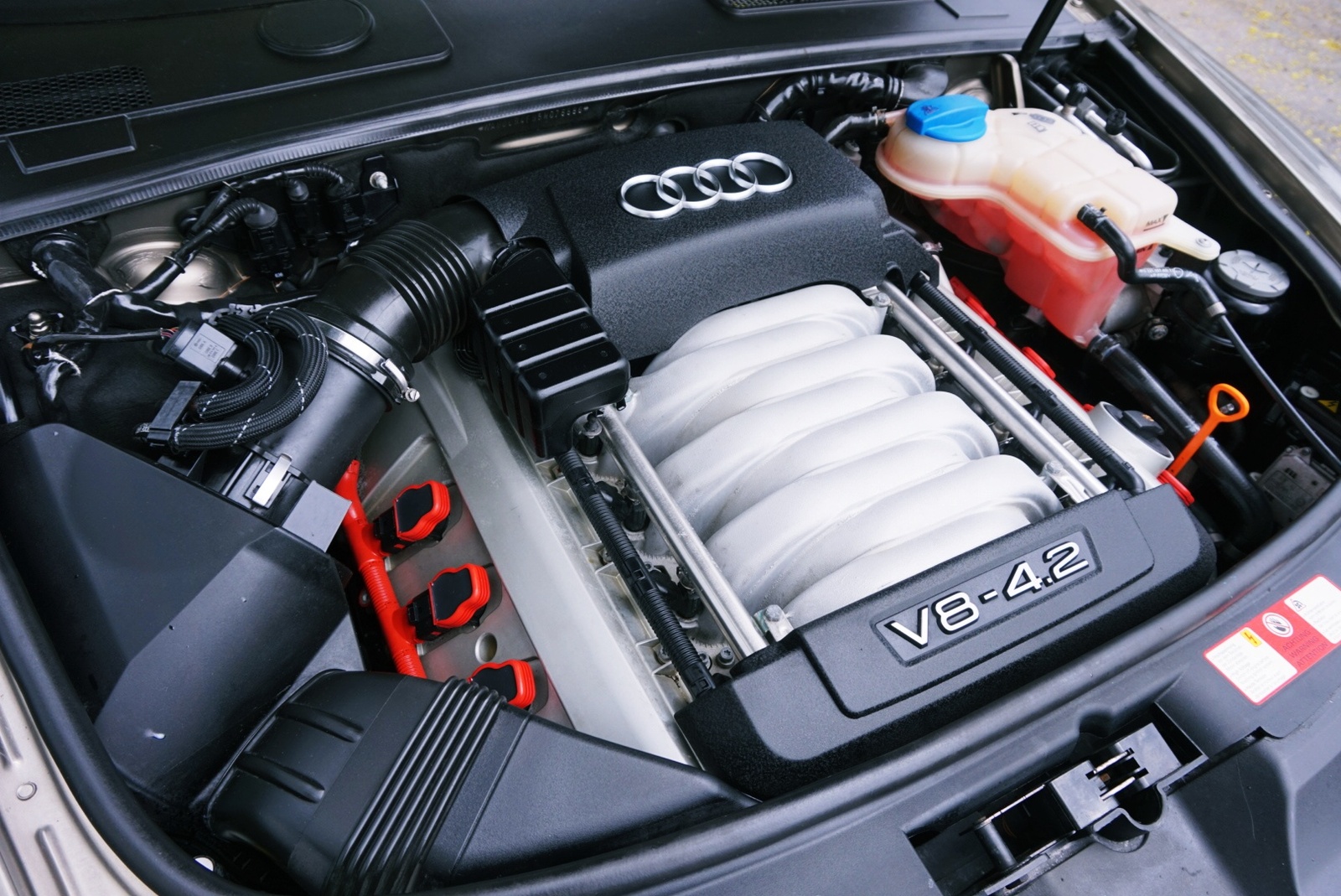 The new A6 feels like a true, world-class sports sedan. Handling is superb, and the car feels planted, in control, and stable at speeds far exceeding those of normal driving situations. Even so, the ride is compliant when it needs to be, soaking up the worst broken pavement and potholes with ease.

The 225-horsepower 3.2-liter V6 engine provides healthy acceleration. Audi says it’s capable of propelling the sedan to 60 mph from a standstill in 6.8 seconds. With the optional 335-hp 4.2-liter V8 under the hood, acceleration is fierce and there’s a throaty sound to match. The V8-powered A6 can scoot from zero to 60 mph in just 5.8 seconds, according to Audi.

The new A6 is a great car for people that need one vehicle to do it all. The all-wheel drive system maintains traction even when the car is being thrashed. In a test drive, the available sport mode sharpened up automatic-transmission shifts considerably, making the A6 feel like a true performance car. The results were impressive, and much better than a front-wheel drive sedan can offer. 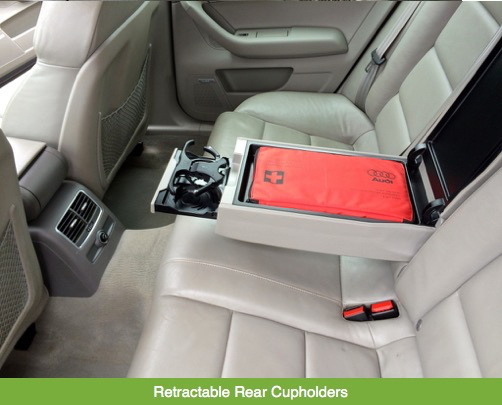 Drivers that are unfamiliar with the quirks of German luxury sedans might be taken aback by the lack of storage space in the A6’s cabin, but it’s on par with what can be found in many other vehicles from Audi, BMW, and Mercedes-Benz. The glovebox is miniscule, a problem made even worse with the optional six-disc CD changer installed. Cupholders are decently sized, but their position is too far back to be useful for the driver.

The interior design is otherwise driver oriented with a no-nonsense feel. The four-spoke steering wheel and all controls are within easy reach of the driver, and a high level of adjustability makes the seats a true wonder. Rear seat legroom suffers slightly from the sloping roof, but the back bench is otherwise comfortable for adults of all sizes. Trunk space is generous, totaling 16 cubic feet, which is better than the A6’s direct competition. 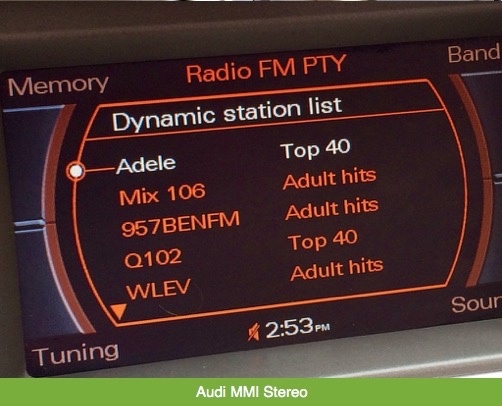 Tech offerings are the same, no matter which version of the A6 you choose. Standard features include an AM/FM stereo with an in-glove-box CD loading slot, 10 speakers, a radio data system, a remote trunk release, cruise control, automatic climate controls, steering wheel-mounted audio controls, 12-volt power outlets in the back seat and trunk, and a universal garage door opener. A multi-CD changer is also available.

Audi's Multi Media Interface (MMI) can feel complex and confusing to folks that aren't used to advanced stereo systems, but functions like a navigation system, Bluetooth, and an intuitive cabin design make using it much easier. 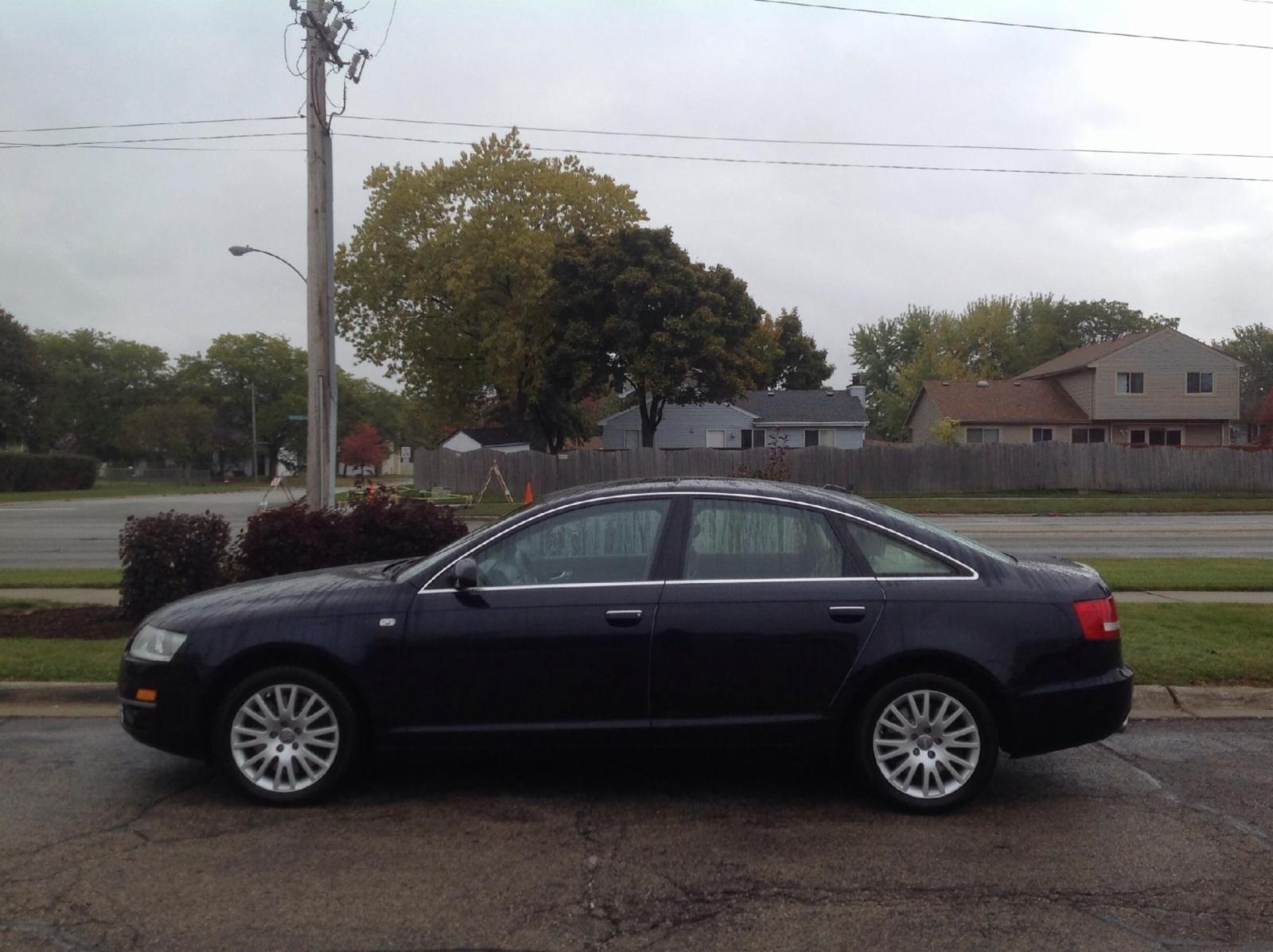 The Insurance Institute for Highway Safety (IIHS) awarded the 2005 Audi A6 top "good" ratings in both moderate-overlap front and side crash tests, and "acceptable" for both roof strength and head restraints. The National Highway Traffic Safety Administration (NHTSA) hasn’t rated the 2005 A6 yet. 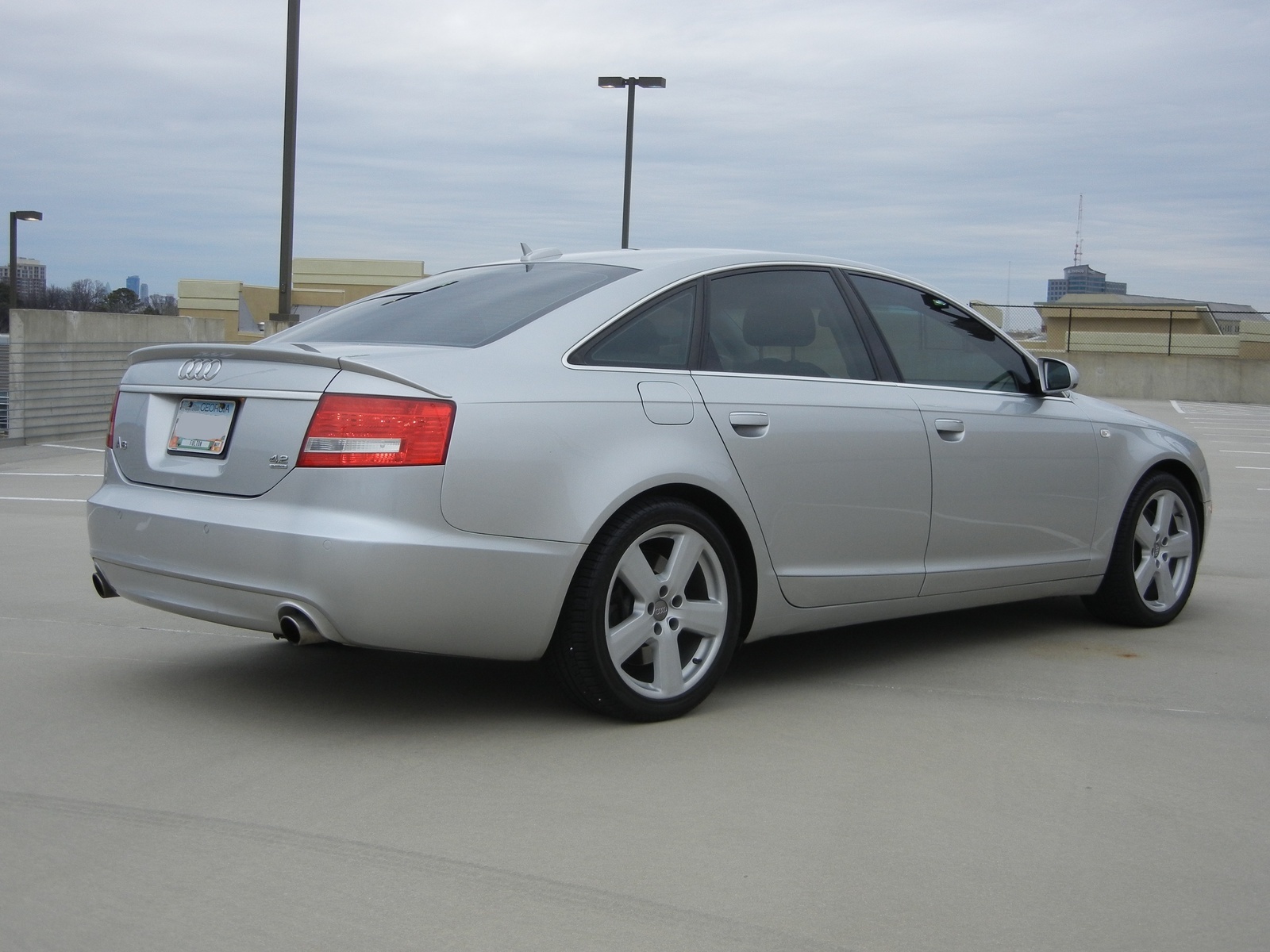 The Audi A6 isn’t cheap, but it’s at least got an easy-to-decipher trim and features list. The 3.2-liter V6 model starts at $41,900 before destination, taxes, or fees, and with the 4.2-liter V8 drivetrain, it starts at $51,500. Those prices are competitive in the segment, where both the BMW 5 Series and Mercedes-Benz E-Class cars can become expensive quickly.

The Audi’s fuel economy is more like that of a full-size SUV than a midsize luxury sedan. Only the V6 model currently has fuel-economy ratings available, and they’re not pretty. The Environmental Protection Agency (EPA) estimates that the 2005 A6 will return gas mileage of 17/24/19 mpg city/hwy/combined.

Audi2009_2011 Audi made many improvements in 6 years. My 2011 is more of a cruiser while the 2005 seems to hug the road better and to be a little more responsive to quick maneuvers.

I have a 2005 a6 Audi with a 3.2 engine. My son-in-law is a mechanic and has changed the transmission oil twice. The first time it was with a generic kit and the second time was with an Audi kit...

How To Open The Glove Box

Bought A 2005 Audi A6 With A Timing Chain Failure. Looking At Buying A Used...

481 views with 9 answers (last answer about a year ago)