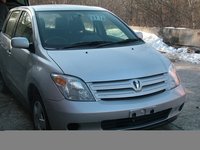 The xA was one of two models unveiled in 2004 under the new Toyota marque, Scion. In the early part of the decade, Toyota had identified its inability to attract younger car buyers, and quickly began to develop uniquely styled new models like the Matrix. Scion debuted the following year.

The xA and xB were set apart from other subcompacts by looks, interior flexibility, and abundant opportunities for customization. The xA was sportier in appearance, but both models used a four-door hatchback layout. Weighing 2335 pounds and measuring 154 inches in length, the xA was the smaller of the two Scions. This model offered 10 cubic feet less cargo space, at 33.

Both models were powered by the 1.5 liter DOHC inline four, which was mated to a five-speed manual transmission. The Variable Valve Timing-enhanced engine delivered 108 horsepower and 105 pound-feet of torque, sending the xA from 0 to 60 mph in about nine seconds. Fuel economy was estimated at 31/37 mpg with the manual transmission. ABS came standard with the xA, and a four-speed automatic was optional.

The more affordable xA was considerably well-equipped for the price, including features like a Pioneer CD audio system, keyless entry, air conditioning and full power accessories. Buyers could select from other thirty dealer-installed appearance and entertainment enhancement options.

Toyota attracted many new buyers with bold styling, a multitude of customization possibilities and respectful sales tactics. Scion keeps them satisfied with reliability, build quality, practicality, and efficiency. Gas mileage is often cited as a favorite feature, along with the spacious and flexible interior.
Back seat leg room is a bit snug for taller passengers, the stiff suspension offers little comfort of uneven road surfaces.

I got a new trailer, light-weight. Same as posted on scionlife. Hooking up the trailer "tail light" circuit, through a 3 wire to 2 wire "converter" drains the battery to near dead in about 5 minutes...