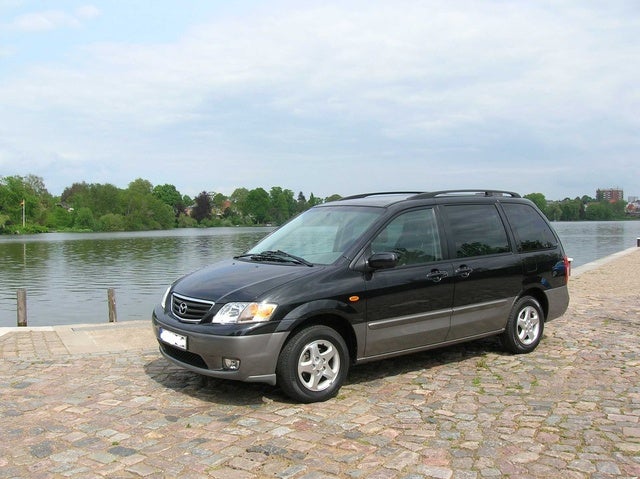 Perhaps owing to the fact that the MPV minivan was showing its age, especially when compared to some of the cutting-edge competition, Mazda gave its seven-seater an update for 2004, with improvements for both the exterior and interior. The headlights, rear lights, hood, bumpers, grille, and side skirts were all freshened up, and seven new exterior colors were added to the mix.
Inside, the steering wheel, rims on gauges, and seat trim were updated, as was the mechanism for the rear seat, so it stowed more easily in the back floor.
The entry-level LX-SV, which had been available the previous year, was dropped from the lineup. So for 2004, the MPV came in only two flavors. The LX package came with a fairly extensive list of standard features, including air conditioning, power windows, power door licks, a keyless entry system, dual airbags, a tilt steering wheel, cruise control, power exterior mirrors, a keyless entry system, and steering-wheel-mounted audio controls for the AM/FM/CD stereo system. In addition, four-wheel anti-lock brakes were added to the standard equipment list for 2004.
The upscale ES version added leather seats, a power-adjustable driver's seat, a leather-wrapped steering wheel, a premium audio system with a CD changer, and traction control, among other features.
Drivers gave the MPV high marks for its handling, styling, functionality, versatility, and value. On the downside, some noted that the ride could be harsh, and that gas mileage could have been better.

Have you driven a 2004 Mazda MPV?
Rank This Car

Driving the van and the o/d light started flashing. Then noticed the check engine light came on. Before I could get pulled over, white smoke started coming out from the engine compartment and fill...

I have put water and antifreeze in it every time only because when i check the reservoir it calls for it and for some reason it doesnt had a radiator cap only over flow reservoir if it does where is...

539 views with 7 answers (last answer about a year ago)

On a Mazda MPV 2004. When we move the mode switch he changes can be seen on the screen but the air flows do not change. Ie we can't get any air into the windscreen or the foot well. At the moment we...

The Left Turn Signal Not Work What Can I Do

So my drivers window switch has gone bad. Will not recieve part for 6 days. I need to find out how to get window up til then