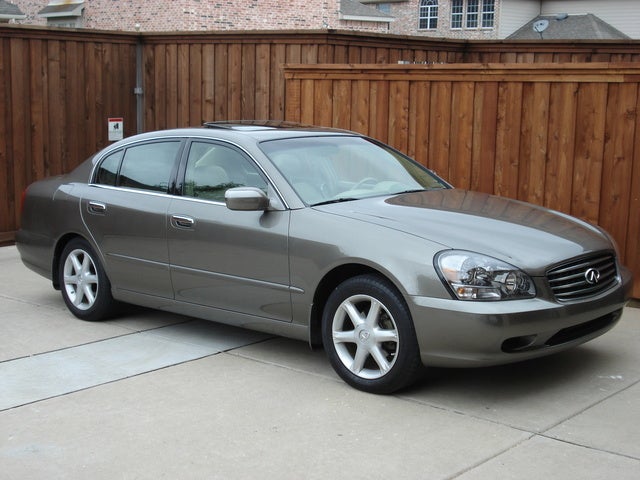 CarGurus has 23 nationwide Q45 listings and the tools to find you a great deal.

Blending luxury and performance, the 2004 Infiniti Q45 sedan has never quite lived up to expectations, its lackluster styling bestowing it wallflower status compared to its European counterparts. Its sporty ride is provided by a rear-wheel-drive, sport-tuned suspension, and a 4.5-liter, 340-hp V8 that delivers 333 ft-lbs of torque with a newly revised 5-speed shiftable automatic. Luxury is provided by standard heated leather seats, a power driver's seat with memory settings, power tilt steering wheel, wood and aluminium trim, and sunroof. So what's the problem? Drivers who love the power and acceleration of the engine are bothered by the bland looks inside and out and an overly complicated dashboard controlled by a joystick and 7-inch screen. Drivers do generally appreciate the voice-activated controls for the climate, audio, and optional navigation systems, though.

Infiniti added a standard rearview camera for 2004, but little else has changed. The 2004 Q45 is available in two trim levels, both offering ABS brakes, dual front-side and side curtain airbags, a tire-pressure monitor, xenon headlights, traction control, and the Vehicle Dynamic Control stability system, which senses where torque and braking power are needed most based on road conditions. These safety features help the Q45 earn the highest marks from the Insurance Institute.

The base Luxury sedan is fully loaded and runs on 17-inch run-flat tires, while the upgraded Premium adds 18-inch wheels, reclining rear seats, heated and cooled front seats, a navigation system, and intelligent cruise control, which maintains safe distances from surrounding traffic. Also standard in the Premium is an adapative suspension, which the driver can adjust to suit the road layout. Everyting on the Premium is available as an option on the Luxury.

The long list of standard features, at a price point lower than its competitors, was attractive to buyers of the 2004 Q45, and the luxury sedan holds a good resale value. Its spacious interior is roomy and comfortable, and the powertrain and suspension add a bit of spark to an otherwise sedate segment, but its trunk is somewhat small. Major complaints mention its dash layout and uninspiring appearance, as well as its unimpressive 17/23 gas mileage.

Phil does 04 have bluetooth

CarGurus has 23 nationwide Q45 listings and the tools to find you a great deal.

I Want To No Much About Engine Timing