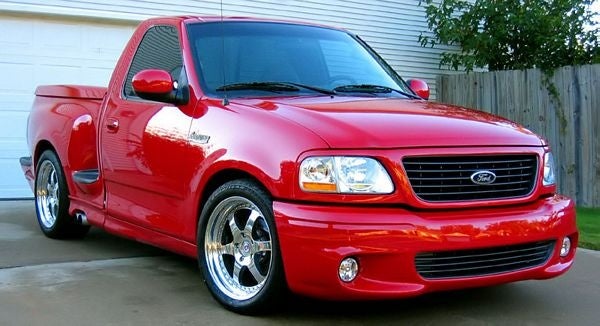 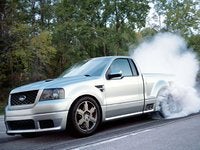 Lovers of this sporty performance truck shed a tear as Ford announced in 2004 that it was returning the SVT Lightning back to the drawing board after one last model year. The 2004 Ford F-150 SVT Lightning had an even smaller production run than its predecessors, which means you aren't likely to find too many of these on the resale market.

It's a shame, really. The 2004 Ford F150 SVT Lightning combines the functionality of a pickup with the power and handling of a sportscar. With a supercharged 5.4 liter Triton V8 engine under the hood, the 2004 Lightning puts out an impressive 380 horsepower and 450 ft/lbf of torque. Its chassis and suspension, modified from the F-150 platform, bring an agile, responsive ride, while the 18-inch specialized wheels provide a touch of street style as well as control on corners.

There aren't too many choices on offer with the 2004 Ford F-150 SVT Lightning; it came off the line with automatic transmission only, in just one configuration (two-door standard cab short-bed), and in a basic range of colors (red, white, black, blue, silver, and gray).

Fans of the SVT Lightning eagerly await the next incarnation of the model line, now slated for 2009. Let's hope the next version is more fuel-efficient; maybe we can add a manual transmission to our wishlist, too.

GuruTZZ1B If your looking for a hot rod pick up truck, the lightning is the one to have

How Do I Cancel. I Sold The Truck

I need a dealers ph number. How can i get it?

how many were producted in 2004 in each color.

Were Can I Get A Service Man For My Lighting