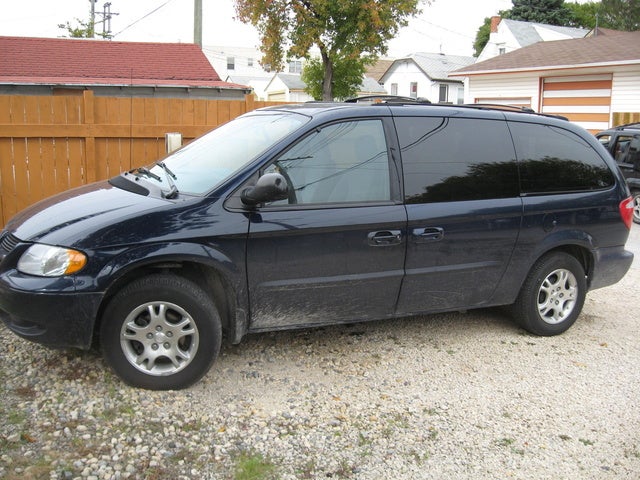 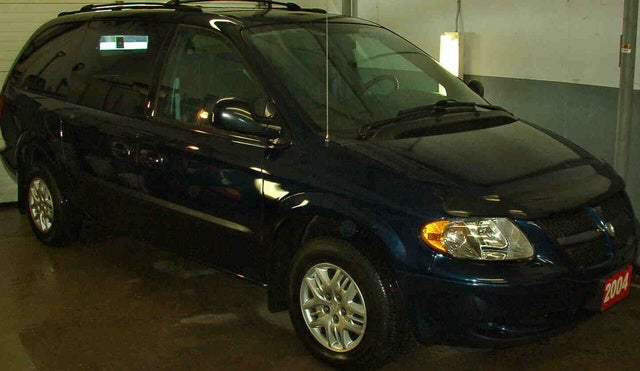 It's Dodge's party, and we'll buy if we want to. You would buy too if it happened to you. On its 20th anniversary, what better way for the 2004 Grand Caravan to celebrate its entry into adulthood than by shuffling its trims and introducing a special anniversary model?

In 2004, gone is the eL, Sport, and ES. The SE remains the base model, with its 3.3-liter, 180-hp V6 engine. The SXT is the top-of-the-line model, with the eX being the value-priced edition of the SXT. Both come with the 3.8-liter, 215-hp V6. Only the SXT is available in AWD with standard ABS. All trims feature seating for seven, with dual front airbags and dual sliding doors.

For 2004, Dodge celebrates with a special SXT anniversary edition of the Grand Caravan, that offers chrome alloy wheels, leather seats, a DVD system, and anniversary badging, along with all the other features that the eX and SXT offer. In these two trims, third-row 50/50 split sitting and removeable center console can configure your cargo and passenger space, and options include power sunroof and power liftgate.

There is little that drivers find wrong with their 2004 Grand Caravan. Spacious interior, power liftgate and sliding doors, the luxury and driveability of a sedan, and a powerful engine that is quiet and gets decent fuel economy are reasons to celebrate. A big complaint is that the third row of seats does not fold flat, in anticipation of the introduction of Stow-N-Go seating for 2005.

What's your take on the 2004 Dodge Grand Caravan?

GuruZT2PW bestvan i ever owned. it was sadly totaled but i had to chop up a crapy normal caravan for parts to rebuild it. the part the wife and i love the most is when some kid pulls up next to us and thinks he's faster then the wives kiddy waggon and gets dusted.. great job dodge with the 215hp. hard to not spin the tires on these bad boys.

Have you driven a 2004 Dodge Grand Caravan?
Rank This Car

the front heater fan on my van is not working. i pulled the fuse and it looks like all the others (not blown) is there a relay on this circuit and if so is it ok to pull it and check it or would that ...

My wonderful 2004 Dodge Caravan with 180000 miles on it was junked because the casting bracket holding the alternator broke. This bracket is part of the front of the engine holding the water and po...

No Air Blowing Through The Front Vent

No Power To #1 And #4 Cylinder From Ignition Coil.

Wife's van started missing the other day. Popped hood to find ignition coil was cracked and started to melt. So I replaced the coil, wires and plugs. Still missing. So went ahead and replaced o2 se...

784 views with 7 answers (last answer about a year ago)

It Misses Real Bad Why Is It Missing