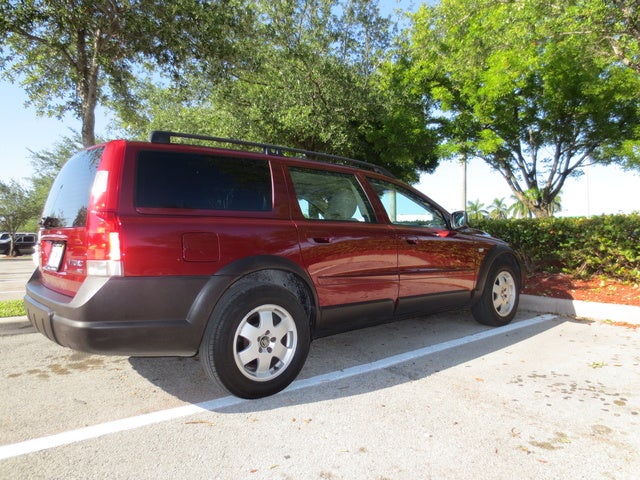 The V70 Cross Country got its remaking and renaming in 2003. It was unveiled as the XC70 in conjunction with the release of the XC90, Volvo's first textbook SUV (think height) which debuted this model year.
Aside from the adjustment to the name, other changes were made to this rugged wagon for 2003. For instance, the move to the Swedish-made Haldex All-Wheel Drive, an electronic system, marks an improvement over the previous viscous coupling AWD. The Haldex is also used in the XC90.
Like the Cross Country before it, this car was made with a 5-speed automatic transmission only. With a 2.5-liter, 208-horsepower engine and AWD, the vehicle averages 18 mpg city and 25 highway. Owners of this model sometimes say that their numbers are better than that.
In addition to the many safety features (air bags, side-impact beams, ABS, traction control, and more), air conditioning, and power locks, windows, and seats came as standard equipment. Leather seats, CD player, and sunroof were made available as options, as was the Volvo Navigation System.
User reviews reflected mostly great satisfaction with the car's appearance, comfortable seats, safety, and build quality. They praised it especially for its abilities in poor weather. There were also several complaints of recurring problems found within these anecdotal accounts. A few others complained of limited visibility due to the car's pillars and somewhat small back window, and others wished for more power.

I Accept An Offer

Someone made an offer on my car and I accept it but I having heard anything back,