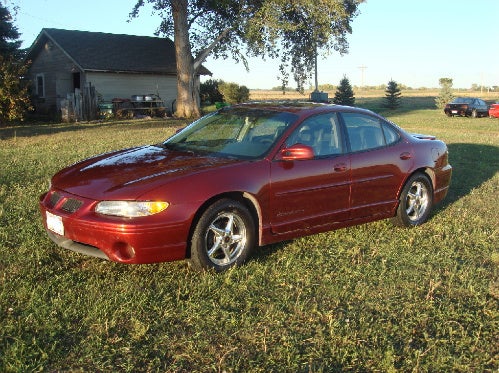 Sharing a birthday with Tom Cruise, the 40-year-old Pontiac Grand Prix shares the actor's popularity and all-American good looks, though its engine might not be quite as bombastic or overblown. The 2002 Grand Prix celebrates its big year with an anniversary edition package for its GT and GTP coupes and sedans.

The Grand Prix sedan comes as an SE, GT, or GTP, while the coupes are only offered as a GT and GTP. The SE features a so-so 3.1-liter, 175-hp V6, compared to the louder and faster 3.8-liter V6 in the GT and GTP, which gets 200 and 240 hp respectively. In the 2002 Grand Prix, cruise control is now standard on the SE sedan, and power-adjustable seats are standard on the GT trims. Both GT and GTP trims come loaded with lots of features and plenty of options, though even the SE has power windows, locks, and mirrors. The top-of-the-line GTP offers steering-wheel-mounted controls, OnStar, and the unique fighter-jet-inspired heads-up display projected onto the windshield, so you don't have to take your eyes off the road to look at the dash. ABS brakes are standard only on the GTP, but dual front and side impact airbags come with all Grand Prix models.

The powerful engine and solid, wide-track handling are overwhelming favorites for 2002 Grand Prix owners. The Grand Prix feels zippy and fun to drive, with responsive acceleration. Many like its overall styling, the comfortably roomy interior, and the heads-up display in particular. Suggested improvements include more rear headroom (which is reduced in cars with a sunroof), better cupholders, less rattling and shaking due to the cheaply made and cheap-looking plastic interior materials, and less problems with the transmission.

What's your take on the 2002 Pontiac Grand Prix?

Have you driven a 2002 Pontiac Grand Prix?
Rank This Car

Why Does My Car Just Shut Off.

my 2002 pontiac grand prix lost total power when i drove up curb entrance at work but was able to re start. three days later drivimg up a hill car lost all power but then had power but wouldnt s...

On my 2002 Grand Prix the DRL work during the day but when night comes they turn off and the brights don’t work either only the fog lights, sometimes randomly they will switch on at night then back...

Overall Length For A CV Axle

Hello, my Pontiac Grand Prix SE 2002 3.1 squeaks (high pitch) really bad when I accelerate above 2000 RPM, if you leave the gas pressed, it keeps doing it and it doesn't go away, it only goes away w...