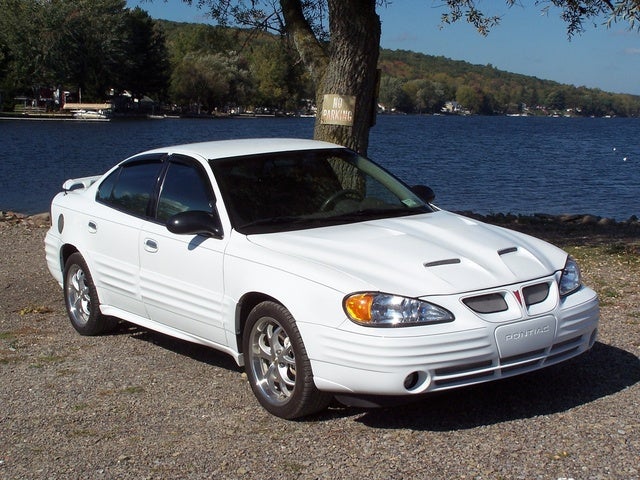 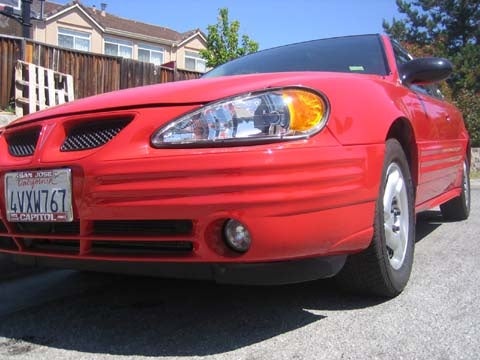 Since its redesign in 1999, the Pontiac Grand Am has fared somewhat better in the reliability department, while increasing its cache as a sporty, dynamic yet practical family car. As a sedan or coupe, its styling has become much more sleek, and engine performance and overall handling have been improved with a more rigid body and expanded wheelbase.
The 2002 Grand Am comes in four trim levels, all as either a coupe or sedan. In 2002, the SE and SE1 receive a new engine, the 2.2-liter, 140-hp 4-cylinder EcoTec engine. This is a drop in ten horsepower, but reviews say it's not significant, and its lighter weight improves fuel economy. The SE1 can have an optional 3.4-liter, 170-hp V6. This engine is standard in the GT and GT1 trims, though it's rated at 175-hp. The V6 comes only with a 4-speed automatic, while the I4s have the added option of a 5-speed manual. Standard features on all include ABS brakes, dual front airbags, power locks, tachometer, and air conditioning, and the offerings increase with each successive trim. GT models also feature bigger wheels, larger anti-sway bars, and a sports-tuned suspension.

Also new in the 2002 Grand Am is a redesigned console. Drivers already liked the convenient ergonomics of the restyled interior, especially the red-lit cockpit dash, as well as the fold-down rear trunk pass-through. Most owners comment on the powerful V6, which makes the driving experience zippy and fun, with good acceleration and crisp handling. They also like the jazzy exterior styling and roomy interior. Some negatives include lack of side impact airbags and a need for more horsepower and a manual option in the V6. Though improved over the earlier generation, the 2002 Grand Am still needs lots of repairs, say owners, including frequent brake pads and rotors. This leaves many disappointed with their purchase.

tlh hello there -- i have a 2002 Pontiac Grand Am with all of the ills from everybody's lists -- weak windows, security--start issue, heater--ac switch screwed up, etc., etc., What I am wondering is this -- I have just under 80,000 miles on the 3.4 v6 engine. How long do these engines usually last? Despite the oil leaks and everything else, the car will get out on the highway and roll...

Have you driven a 2002 Pontiac Grand Am?
Rank This Car

Cars compared to 2002 Pontiac Grand Am

My car has 168k miles and the transmission is banging gears as well as slipping once the car gets up to temp. I feel like its the solonoid in the transaxle but wanted to get some other opinions as ...

I drive a 02 pontiac grand am se. It has 168k miles on it. The transaxle starts banging gears and slipping ears when the car gets up to temp. It doesnt do this all the time. I think its the transax...

6 views with 3 answers (last answer about a month ago)

I own a 02 Pontiac grand am se its got 168,000 miles on it and the transmission starts banging gears and slipping as well when the car gets up to temp. Im thinking its its the solinoid but wanna se...

0 views with no answers yet
30

Recently while driving down the highway, my brake light will come on. Last night it came on and kicked out my cruise control. Any idea why it’s coming on?

My Car Won't Start After It Has Been Started Recently.

This began about two years ago. It starts fine in the morning, or after it has been sitting a while, but if I drove it for a short distance, it wouldn't start again. Sometimes it would start and ...

2002 Pontiac Grand Am Trims For Sale