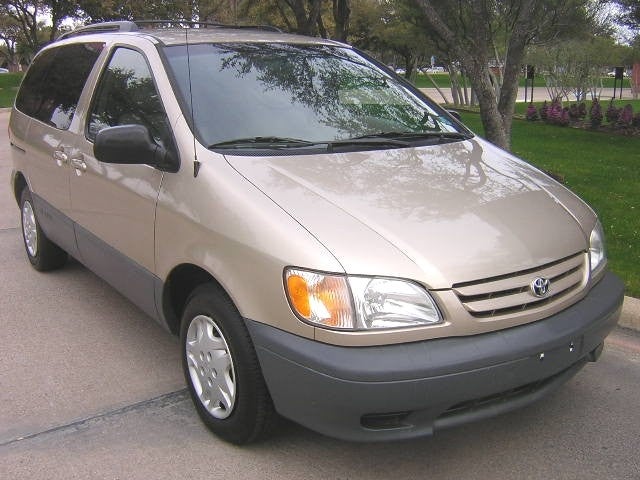 The 2001 Toyota Sienna saw a few changes, including the discontinuation of the three-door CE. The engine was given a power boost, and the grille, front bumper, taillights, and headlights all received a makeover.

The 2001 Sienna came in three trim levels: the base CE, the midrange LE, and the high-end XLE. The CE is for minimalists only, with air conditioning, power windows, power locks, and a cassette player all optional. The LE is better equipped, and the XLE includes luxury-like amenities, such as leather trimmed seating and a power moon roof. The engine is a 3.0 liter, 210 horsepower V6 that gets about 19/24 mpg.

Drivers like the 2001 Sienna because it handles like a car instead of a van, offers plenty of cargo space, and comes with Toyota reliability. Many owners find that the van is overpriced, and many wish for rear seats that fold completely flat.

Users ranked 2001 Toyota Sienna against other cars which they drove/owned. Each ranking was based on 9 categories. Here is the summary of top rankings.

Have you driven a 2001 Toyota Sienna?
Rank This Car

Oil Blowing Out Of The Crankcase Breather Hose And Into The Air Cleaner Se...

As above, oil is being pushed out of my engine from a tube leading from the front valve cover to the air cleaner

I just changed out knock sensor bank 2. Since I put it back together, my obd says P0300 multiple misfires & P0306 cylinder 6 misfiring. Could a bad knock sensor cause this?

77 views with 1 answer (last answer about a year ago)

Hello, I have a heater hose leaking and so I have to keep replenishing my coolant in my 2001 Sienna. Does anyone know how to replace this part? I'm not an experienced car-mechanic by any stretch bu...

Heat comes out of my vents when tempature is on cold.

Light On For Cvs