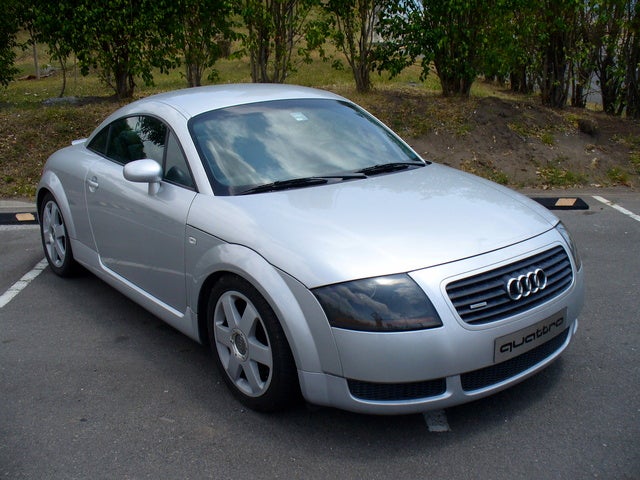 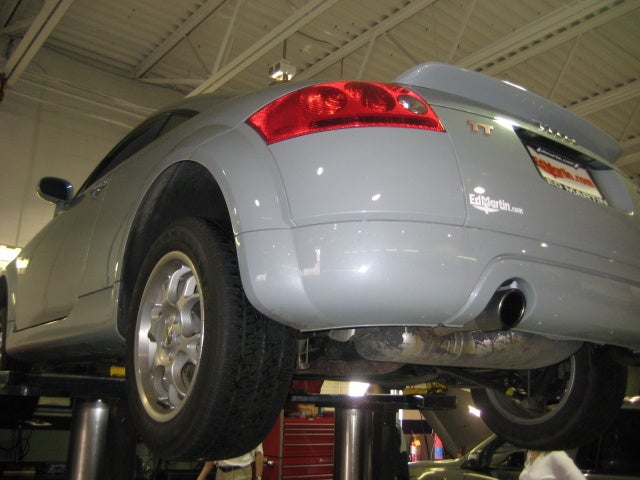 Bursting onto the scene like a pouncing panther, the 2000 Audi TT was Audi's first sports car since its quattro coupe. First introduced as a concept car in 1995, the TT was all rounded muscle and chopped fastback roofline, a cocoon of a car that looked like it was teeming with forward propulsion. It set the standard for subsequent car design.

Named for an Isle of Man road race, the Tourist Trophy, the 2000 Audi TT originally offered only a 2-door front-wheel drive coupe. A quattro version was released midyear. Made from anodized aluminum, this muscular bubble looked futurisic on the outside, but shared a platform with the Volkswagen Golf. Inside the 2000 TT was a 1.8-liter, 4-cylinder turbocharged engine that hit 180-hp with a 5-speed manual. Though it was the same engine as in an Audi A4, it was specially tuned for higher performance power. A sports-tuned suspension meant a firmer ride and was more appropriate for highway, rather than city driving, where the TT could open up and strut its tight handling and cornering. Despite its growlingly aggressive looks, however, the 1.8 engine meant the TT was no race car (especially with the heave quattro system), but more of a fast pleasuremobile, fun to take out on country roads and let fly.

Inside the aluminum frame, the cockpit cabin featured aluminum accents throughout, to complete the futuristic look. Though it sat four, the 2000 TT was really designed for two to enjoy the ride. The backseat was barely big enough for kids and was difficult to get in and out of. However, with the 60/40 split bench, it opened up to increase cargo space. Leather upholstery and steering wheel trim came standard, as did one-touch power windows, cruise control, fog lights and rear defogger. For night driving, the dash was illuminated in red.

The TT was on Car and Driver's Ten Best List for 2000, despite a few glitches. Audi TTs made in 1999 were recalled due to instability at high speeds. The suspension was reworked and a rear spoiler added to improve this problem. TT owners love the look of their sporty tourer and the way it handles around curves. Though speed is pleasing enough, most wish for more horsepower, since its capacity really doesn't live up to its exterior image. Interior ergonomics and features were also well liked. Downsides were the cramped backseat and lack of lumbar support in the front, as well as poor rear visibility due to the tapering windows. And many report problems with the electrical system, which led to lots of visits to the mechanic.

I have a 99 Audi TT , long story short ! Car was running fine , furled it up and it started missing and running very rough , to the point it would stall after approx 1-2 km if Id sit and wait 10 mi...

373 views with 7 answers (last answer about a year ago)

Yellow warning light on my Audi Quattro tt,has come on ,I have no manual so don't know what it's for,help

I Have Noticed A Trend That People Are Selling Their Audi TT Mostly Under O...

Back End Of My TT Keeps Spinning Out

Thank you so much for the detailed answer and I'm sure you are 100% right as its pretty much what I suspected. I have another question if you could help me out as its quite serious. Recently the bac...