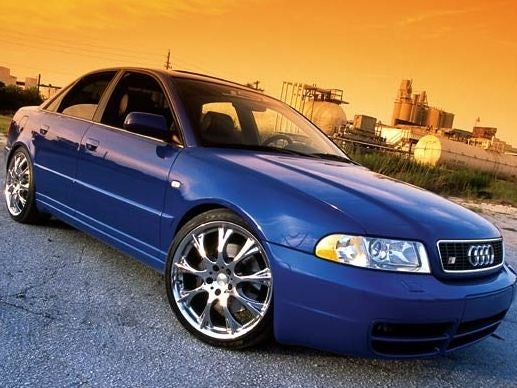 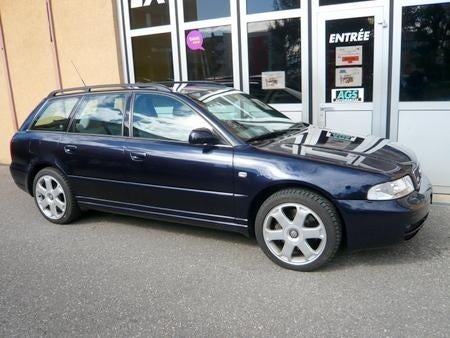 After a five-year hiatus, the 2000 Audi S4 came back, faster and sportier than ever. Built on the A4 platform, the S4 was the sports-tuned version of Audi's smallest sedan. Firmer brakes and shocks and a stiffer suspension provide sports-like handling around curves. Quattro all-wheel drive keeps you glued to the road regardless of the outside conditions. Audi also billed the 2000 S4 as the fastest sedan in its lineup. With a 2.7-liter, 250-hp V6 twin-turbocharged engine, it boasted a 0-to-60 time of 5.6 seconds. A 6-speed manual transmission came standard, with a 5-speed Tiptronic auto/manual tranny optional.

The S4 was definitely fast, but not at the expense of a comfortable ride. The aluminum-based suspension reduced the weight of the car, allowing for smoother and more balanced handling. Inside, special sports seats with side bolsters kept front-seat riders locked in place. Standard features include leather seats, power adjustable front seats, cruise control, keyless entry, trip computer, and automatic climate control. Optional packages added a sunroof, garage-door opener, auto-dimming mirrors, and heated seats. ABS brakes, traction control, and dual front and side curtain airbags provided good crash ratings. Though a monster lurked under its hood, the S4 remained as unassuming as its A4 brother, just a mild-mannered classy sedan. Its distinguishing features were larger 17-inch wheels, xenon headlights, and minor badging.

The 2000 S4 earns raves from owners, who refer to it as an "A4 on steroids" because of the engine power and road-burning speed under the hood. They report very little turbo lag, thanks to the twin turbos. Steering is responsive, cornering snug, and handling crisp. The ride is so smooth, you don't realize how fast you're going. Other highlights include plenty of low-end torque and unsurpassed Quattro capabilities in rough weather. Drawbacks seem to be lack of legroom in the back seat, a somewhat noisy ride, and an imprecise shift. Drivers suggest replacing it with a short-shifter.

EnDeMen19 Car has amazing handling at 60-90 mph Even at 120 I have not driven a better handle It's turbo charge has a great accelerator for when you need to get to point b in a matter of minutes Not much of a gas consumer for a medial 3L v6 and with 6 gears you can virtually coast at 50-75 mph on the highway Great Drive!

I want to buy an 2000 audi s4 but my family and friends are telling me not to buy it b/c of something goes wrong it's gonna be really expensive for me to fix it...like how much would I have to pay...

How Is Maintenance With High Miles?

i am looking to upgrade my vw and buy and audi finally. I have been looking at audi s4s with around 70,000miles to 90,000 miles. How are the repairs on the higher mileage s4s? Also, are there any majo...