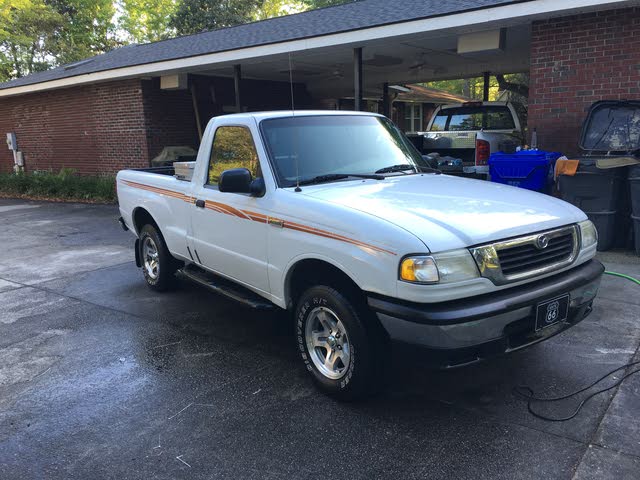 The Mazda B-Series compact pickup trucks received a complete makeover for 1998. For starters, the standard cab was lengthened by three inches, and the exterior received a more streamlined look that many drivers and critics thought was more attractive than the Ford Ranger's, on which the Mazda B-Series was based. In addition, a new four-door extended cab was added to the lineup, the front suspension and steering were updated, the frame was stiffened, and the base engine was upgraded to a 2.5-liter four-cylinder powerplant, which generated 119 horsepower.

In all, the Mazda B-Series trucks were available in 10 different variations, including standard or extended cabs with either two-wheel or four-wheel drive. Trim levels included the base SE and the higher-end SX packages. And perhaps most importantly, the trucks came with a choice of three engines -- the new 2.5-liter four-cylinder, plus a 150-horsepower 3.0-liter V6 and a 160-horsepower 4.0-liter V6.

While the power provided by these engines, especially the V6's, were adequate for many drivers, some noted that overall the engines lacked in power when compared to those offered by Mazda's competitors, such as Toyota. Of course, the Toyotas also cost more, which made the Mazda B-Series trucks somewhat more attractive to buyers on a budget.

By this time in its history, the B-Series had built a loyal following among drivers, many of whom stuck with the vehicle through the model years. Reliability, handling, styling, and comfort, as well as a high build quality, were some of the reasons drivers came back to the B-Series again and again. Some noted that the vehicle's payload capability was not as large as its competitors, but for drivers in the market for a durable, reliable light truck, the B-Series seemed to fit the bill.

Have you driven a 1998 Mazda B-Series?
Rank This Car

No Safety Switch On Clutch

i recently bought a mazda b2500 the previous owner removed everthing except the clutch pedal and inserted a jumper wire the wire fell off i dont know how to reattach let alone where it goes ,if i do...

I am learning how to fix up my car on my own and went to change the parks plug wires on my 4 cylinder engine, and noticed there are 8 spark plugs. I was just wondering why, if that is normal? What d...

So I drove my truck yesterday all around town had to take my kid and wife to work it ran fine this morning go to take my kid to work and start it up put it in gear and the front wheels will not tu...