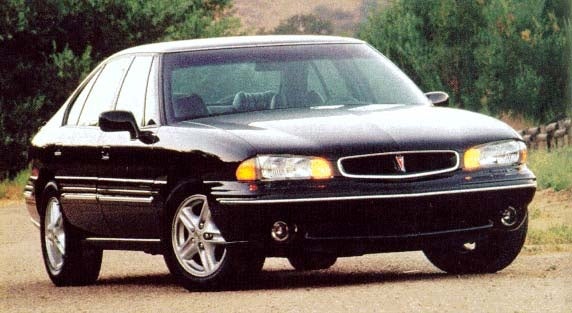 The USS Bonneville, Pontiac's full-size sedan, is a high-end luxury car that has a lot of engine power and zip and is able to seat six comfortably. Though automakers aren't really building boats anymore, the Pontiac Bonneville is as close as you'll get to the pre-1970s combo of interior space and upscale cruiser, only now it comes with excellent fuel economy.

The 1996 Bonneville came in two trims, the SE and SSE. Both were available with the new Series II 3.8-liter, 205-hp V6, but if you got the SLE package for the SE or the SSEi package for the SSE, you got the supercharged version of this engine. In 1996, this engine got a 15-hp boost to 240-hp. A 4-speed auto tran was the only transmission available. The SLE package on the SE came with leather seats, sunroof, performance suspension, ABS brakes, and 16-inch wheels. The SSEi package was similar and added badging and gaudier body trim. Other changes in the 1996 Bonneville included a restyling of the front and rear ends, a standard rear defroster, and auto climate control on the SSE. Also new were daytime running lights that switch to low beams as the sun sets, and standard on the SEE was Magnasteer variable effort steering, for more reponsive steering action.
It's rare to have such a big luxury car that is also a performance vehicle, but with the supercharged engine, the 1996 Bonneville was fast on the highway. Owners say it has good pickup, and the handling makes it feel like a much smaller car. With 24/30 mpg, the fuel economy is also a nice surprise for its size. Other high points include all the interior room, the relatively inexpensive extra features, and the fun and fast driving experience. Cracks in the manifold are common, as is the tendency for the plastic interior parts to break. Owners say it is expensive to maintain, and there are numerous repairs, particularly with the transmission. If you open the trunk when it rains, the water tends to dump inside, and those with a sunroof have had problems with rain collecting inside the rear foot wells.

What's your take on the 1996 Pontiac Bonneville?

Azareia I just got my first car (1996 Pontiac Bonneville SE) in august and I bout it for $1,000 in cash! I bought it with problems and w/o having a diagnostics done or having a mechanic with me guiding me! From the owners mouth he told me that the car was sounding funny because it needed Freon for the AC and a new circulmtem belt and claims it would be running like a new vehicle. After changing the belt it still sounded like crap! So I took /my car to two different macanics shops and they both told I would need a new Ac compressor, struts, a new water pump, new pulleys, new teansors, new belt, tramission leaks, new vac lines, a new alignment and some other mnor repairs! I ended up having my car in the shop for 4 days paying $1600 for all repairs done!!! he ended up having to take my ac out nd ordering a special made pulley :( even though I am a female and don't know too much about any cars I do believe it was well worth it because my car rides and sounds like a brand new car :) do u believe I made the right decision on paying that much money to have all that work done???? plus I love it because it GREAT on gas:) love my first car!

Have you driven a 1996 Pontiac Bonneville?
Rank This Car

It will start up and about two !mins latter it will die

I Need A Diagram Of How To Put The Belt On My 1996 Pontiac Bonniville SSE W...

I need a diagram of how to put the belt on my 1996 pontiac Bonniville SSE with super charge. can you help?

My Car Turns Over But Will Not Start, It Is Getting Fuel

I have a 96 Pontiac Bonneville, it has a new battery and gets fuel. My inside gages are bouncing. ive tried all the fuses, it trns over but will not start...