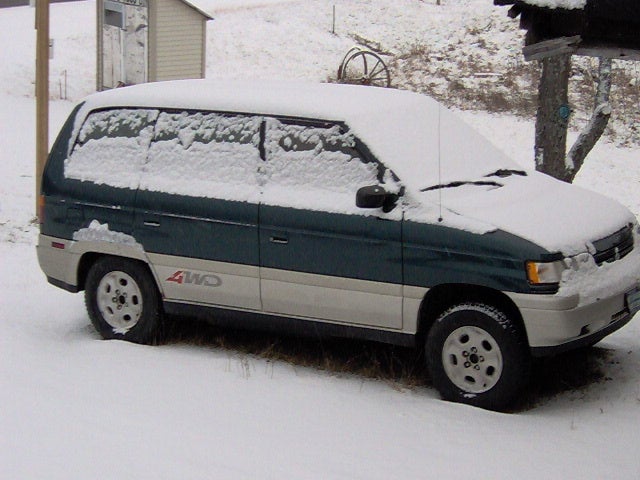 Mazda revised the lineup of its MPV minivans for 1995. New L, LX, and LXE models were added, all with seating for seven passengers. In addition, the four-cylinder engine, available the previous year, was dropped in favor of a 152-horsepower, 3.0-liter V6 engine, which was the standard powerplant across the line. The standard transmission was a four-speed automatic.
The L version of the MPV was available only with two-wheel drive, while the LX and LXE models came with either two-wheel or four-wheel drive.
Standard features for the MPV included power brakes, power steering, a driver's-side airbag, a third seat, an AM/FM audio system, and rear-wheel anti-lock brakes. The LX version added power windows, power door locks, a cassette player, a tilt steering wheel, and cruise control, while the LXE version added leather seats, two-tone paint, and a leather-wrapped steering wheel, among other features.
Drivers appreciated the MPV for its roominess, practicality, functionality. As far as build quality was concerned, drivers were mixed in their opinions, with some reporting few problems with their vehicles and others reporting having frequent problems requiring repair.

Have you driven a 1995 Mazda MPV?
Rank This Car

What Does A Blinking Level Light Mean

WHY DOES MY CAR SCREAMS WHEN I START IT?

I have a 1995 mazda minivan which runs well but lately when I start it there's a screaming sound. What is that?