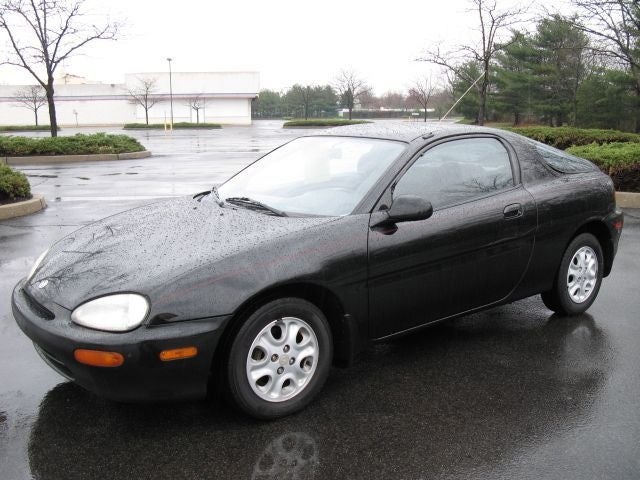 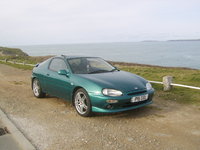 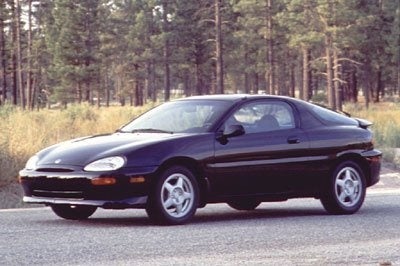 For 1994, the Mazda MX-3 sports coupe was available in both Base and GS versions. The Base model received a boost in power, getting a new 1.6-liter, double-overhead-cam four-cylinder engine that produced 105 horsepower, an increase of 17 horsepower over the previous year. The GS model was power by a 130-horsepower, 1.8-liter V6, which was the smallest V6 engine in the industry.
In addition, a passenger-side airbag was added to the list of standard features for both models. Other standard equipment for the Base model included power brakes, power steering, power exterior mirrors, a tilt steering wheel, and an AM/FM/cassette stereo system. The GS added a rear spoiler, a tighter sport suspension, and alloy wheels. Options included air conditioning, power windows, power door locks, a sunroof, and anti-lock brakes.
Drivers liked the MX-3's handling, styling, reliability, quickness, and economy. On the downside, drivers noted that the back seat could be cramped, and that replacement parts could be be expensive.

Where do you put transmission fluid

How To Remove Ignition Lock Cylinder With No Keys

i just bought a 94 mx3 v6 from a friends brother who got it at storage auction with no keys. i would like to know how to remove the lock cylinder to replace it with one that has a key, iv had it tur...

Where Is Crankshaft Position Sensor On A Mazda MX-3 GS 1.8l Automatic

I have bought a used tested distributor and still do not have a spark when I try to start my MX-3 GS. From my own research I have narrowed it down to the crankshaft position sensor. Every picture ...

Why Is The Engine Completely Shutting Down While Driving When The Radio And...