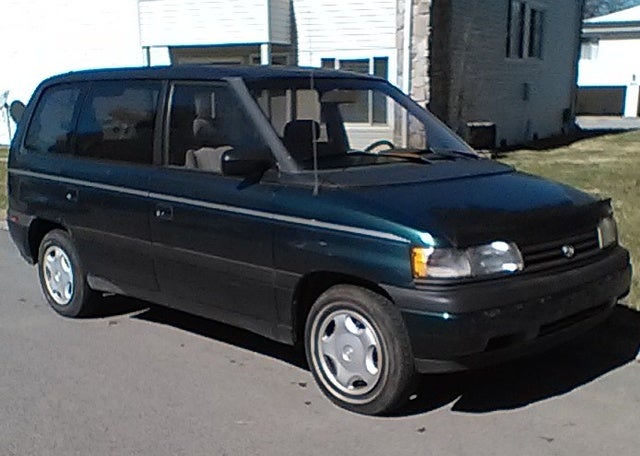 Mazda's MPV minivan received only a few minor upgrades for 1994. Larger 15-inch tires, disc brakes, and side-door impact beams were added to the list of standard equipment As in previous years, the MPV was available in both two-wheel and four-wheel drive versions. The two-wheel-drive MPV came with a 121-horsepower, 2.6-liter four-cylinder engine, while the four-wheel-drive model was equipped with a 155-horsepower, 3.0-liter V6. A four-speed automatic transmission was standard for both models.
Standard equipment for the MPV included power brakes, power steering, a tilt steering wheel, power exterior mirrors, an AM/FM/cassette stereo system, and rear-wheel anti-lock brakes. Options included air conditioning, power windows, power door locks, and cruise control.
Drivers reported having relatively few repair problems with their MPVs, and many considered the vehicle to be a good value and economical to drive. On the downside, some noted the MPV could be noisy, and some considered it to be underpowered.

Have you driven a 1994 Mazda MPV?
Rank This Car

I took a jump with my 94 MPV. Doesn't want to start. Just turns over with no fire. Fuel shut off switch? Where do I find?

How do I trouble shoot fuel pump not working

1994 mazda mvp minnievan 3.0 eng. 2 wheel drive fuel pump not turning on .. Wanted to trouble shoot ? Where is fuel pump relay & is there anything else that may cause fuel pump to not turn on ?

leaking antifreeze at the back of the engine and i cant find where the source is. its not the freeze plugs on either side of the engine as far as i can tell. leaking gallon of antrifreeze out the bott...