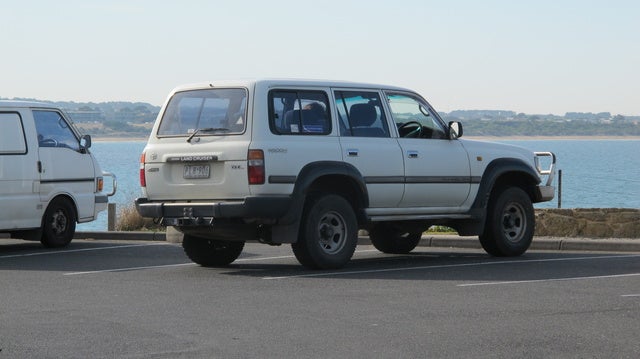 The 1993 Toyota Land Cruiser saw one significant change: finally, after years of complaints about its lack of power, the Land Cruiser got a bigger engine. Anti-lock breaks were also made available.

The 1993 Toyota Land Cruiser came in one trim level and had a 4.5-liter, 212 horsepower six cylinder. A four-speed automatic was the only available transmission. The 1993 Land Cruiser had a permanently engaged four-wheel-drive system. Fuel economy was about 12/14 mpg.

Drivers love the 1993 Toyota Land Cruiser both on-road and off. Finally, the TLC had the power it needed, and consumers took notice. They say it handles well in the snow, mud, and rain, and is extremely reliable. As the list of luxury and safety options continued to grow, and as the ride became smoother and quieter, the Land Cruiser was becoming a popular, versatile every day vehicle. Still, consumers bemoaned the SUVÃ¢Â€Â™s terrible gas mileage, and the 1993 Land Cruiser was expensive to purchase and repair.

What's your take on the 1993 Toyota Land Cruiser?

Have you driven a 1993 Toyota Land Cruiser?
Rank This Car

What Does The "Check Engine" Symbol And Light Mean? Toyota Has Not Been Abl...

After Toyota kept telling their diagnostic tests showed nothing wrong with engine, etc., they couldn't figure out why the light kept coming on after a few miles of driving. Through our pesistance, t...

MY LANDCRUISER HAS A WATER LEAK UPPER PART OF FRONT WINDSHIELD. HAS ANY ONE...

My TLC Pulling To The Right

my tlc 1993 is pulling to the right while accelerating and same as while braking . And during cruising have to hold the steering hard i, if not it will run to the right...please advice

What Is The Tow Capacity?

how much can a 93 land cruiser tow