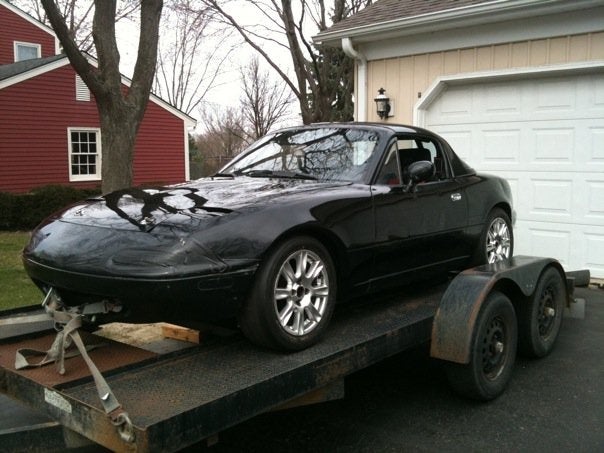 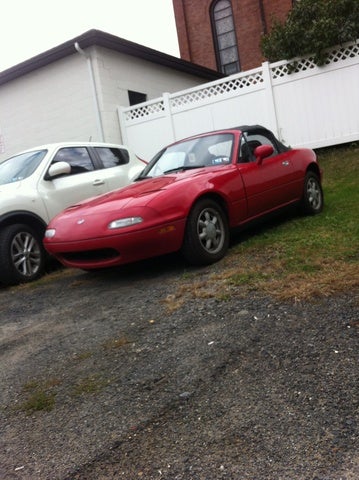 For its fourth year in production, Mazda's popular MX-5 Miata received only a few minor upgrades, including the addition of new tan-colored soft top. In addition, a new Sensory Sound stereo system with a CD player was added to the options list.
The MX-5 Miata was powered by a 116-horsepower, 1.6-liter, double-overhead-cam four-cylinder engine with multi-port electronic fuel injection.
A five-speed manual transmission was standard, while a four-speed automatic was optional.
The MX-5 Miata came with a manually operated soft top. A removable hardtop was available as an option. Other standard features included power brakes, four-wheel double-wishbone suspension, a driver's-side airbag, remote fuel and trunk releases, and 14-inch wheels. Options included air conditioning, power windows, anti-lock brakes, cruise control, a leather-wrapped steering wheel, aluminum alloy wheels, and leather seats.
The most common comment heard from drivers was that the MX-5 Miata was a fun car to drive. Its handling, styling, reliability, and durability were among the positive points cited by drivers. Limited trunk space and limited power/performance were among the negatives noted by drivers.

GuruYB8ZW We love ours . It's fun to drive . Looking for hardtop for it and having no luck . Anyone can help ?

Battery is good. Headlights come on everything else is dead ? I figure it may be some fuse? I store the car every winter and this is a first. Owners manual does not really show an ignition fuse per sa...

Hello, the tachometer, oil pressure and turn signals stopped working. What fuse needs to be changed to fix the problem?