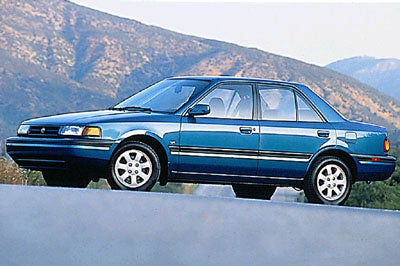 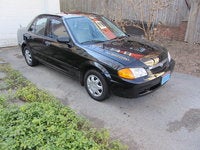 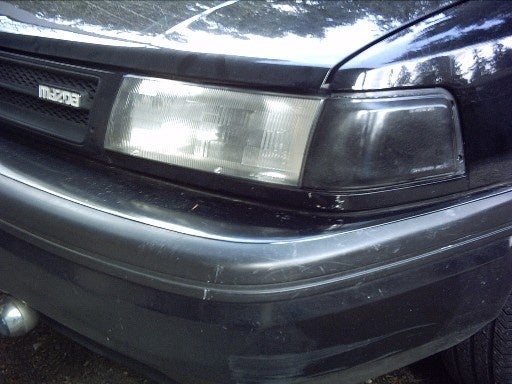 The Mazda Protege received a minor styling update for 1992, with a new taillight design. In addition, a four-wheel-drive version of the Protege, which had been available the previous two years, was dropped for the lineup.
Two versions of the Protege were available for 1992. An entry-level DX sedan was powered by a 1.8-liter, inline four-cylinder engine that generated 103 horsepower, while a higher-end LX trim package received the same 1.8-liter four-cylinder, but twin cams boosted its horsepower to 125. A five-speed automatic was standard for both models, while a four-speed automatic was optional.
Standard features for the Protege DX included power brakes, a rear window defroster, and 13-inch wheels. The LX added power windows, power door locks, power exterior mirrors, cruise control, a tilt steering wheel, 14-inch wheels, and an AM/FM/cassette stereo system.
The early-'90s models of the Protege that are still on the road now have high mileage, but for the most part drivers note that they have had only minor problems with their cars, which generally have needed only routine maintenance and repairs. The car's acceleration, handling, and comfort have been cited by drivers as positive points, while interior space can be cramped, which is in keeping with the car's subcompact nature.

Have you driven a 1992 Mazda Protege?
Rank This Car

While at a stop after driving for a bit, speedometer didn't read anymore and the hold light for the transaxle started flashing. The car shakes some at any long red lights. But I can't figure out if...

i recently had the water pump and timing belt replaced about a week ago. the job went good but ran slightly rough as did before so, i sprayed some air intake cleaner througb it and 2 days later the en...

Why Does My 1992 Mazda Protege LX With Correct Tires , Have Such A High RPM...

Re: My Auto Insurance To Supply A Replacement Car: Is My 1992 Mazda Protege...

California law quotes actual cash value of a totaled car as the market-driven, "fair-market-value of a comparable replacement." My 1992 Mazda Protege, 4cyl sedan, has 145k miles. Must I settle for an...

Is It Worth Putting A Transmission In A 1992 Mazda Protege?

It has 192,000 Kms. The engine runs good and the body is in good shape. Is $500 a good price for this car? The transmission (automatic) is slipping.