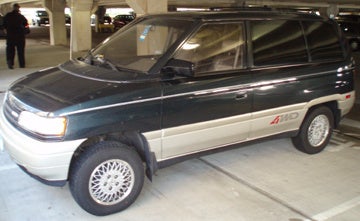 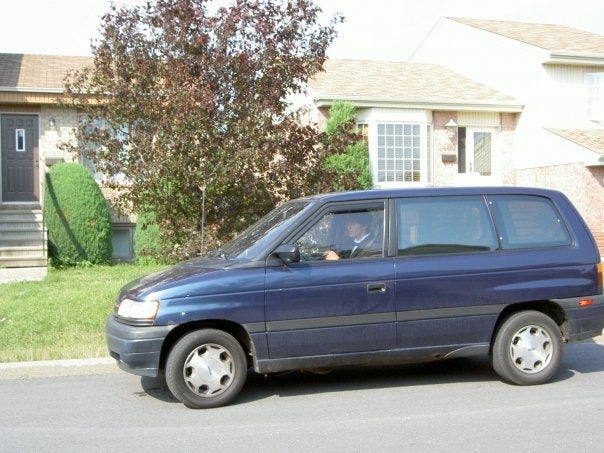 The Mazda MPV went upscale in 1991, offering a Luxury Package upgrade that included leather seats, two-tone green and silver paint, and alloy wheels borrowed from the Mazda 929 sedan. It joined the base-level MPV, which was available in both two-wheel and four-wheel drive versions.
The two-wheel-drive MPV came with a 121-horsepower, 2.6-liter four-cylinder engine, while the four-wheel-drive model was equipped with a 150-horsepower, 3.0-liter V6. A five-speed manual transmission was standard on the two-wheel-drive models, while a four-speed automatic was standard on the four-wheel-drive version.
Standard features for the MPV included bucket seats, power brakes, power steering, a tilt steering wheel, power exterior mirrors, and rear-wheel anti-lock brakes. Options included air conditioning, power windows, and cruise control.
While some drivers noted minor problems with the MPV, such as rear seats that were difficult to remove, most noted that overall the MPV was comfortable, reliable, and handled well. In fact, current drivers noted that their early-'90s MPVs are still running fine.

Have you driven a 1991 Mazda MPV?
Rank This Car

When I apply the brakes the brake warning light on the dash is coming on? What could be the problem? I have had the vehicle in for regular service. Thanks.

My HC Ppm Is Reading Too High. I Failed Emissions. What Does This Mean?

the air conditioner no longer works. what can i do

Front Passenger Side Of Van Has Collapsed And Almost Resting On Tire. What ...

Was parking my van which is a 91 mazda mini van, and suddenly felt like the front passenger side fell into a gutter, but when I looked, it had collapsed somehow, it was a loud crushing grinding sound ...