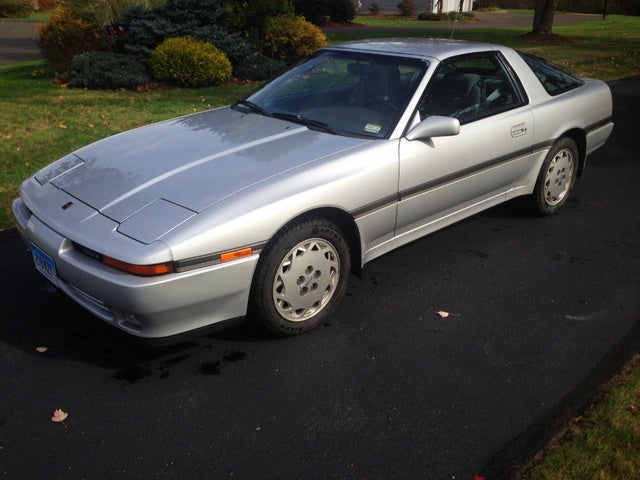 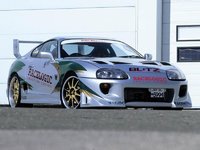 The third-generation 1989 Supra is a high-tech take on the Grand Tourer.

Up until the third generation, the Toyota Supra was a more expensive, not-particularly-different version of the four-cylinder Celica. But in this generation, the Supra stands on its own, completely divorced from the Celica, while retaining its rear-wheel-drive (RWD), inline-six layout. Exemplifying 1980s design, these hidden-headlight gems tend not to bring the big money of the later A80 Supra. 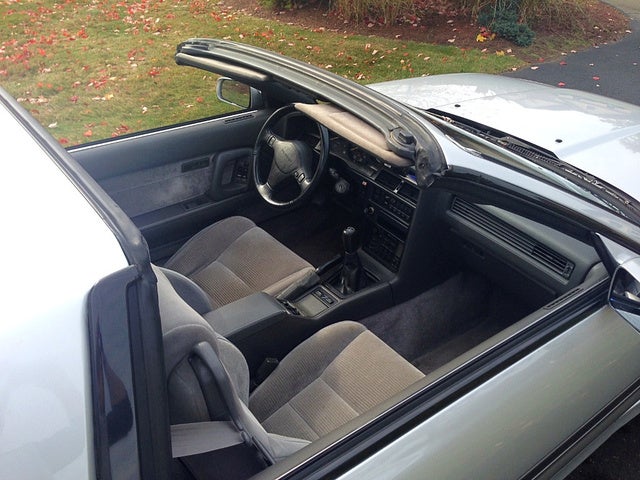 The A70 Supra (also known as the MkIII) is a creature of its time period. If you don’t like the door-stop design of this generation of automobiles, the Supra isn’t going to do it for you, but if you do, the Supra is at the pinnacle of this design trend.

The bellwether for the 1989 model year is the Supra equipped with the White Exterior Appearance Package, featured in a full spread in the ‘89 Supra brochure. The monochrome “White Package” Supra had white bumpers, side moldings, and white “sawblade” alloy wheels. These coupes showed a sharp profile, especially when equipped with the Sport Roof, a removable targa top that opened the entire interior to the sunshine, and sealed well to keep the rain out on lousy days.

Even in less exclusive color combinations, though, the Supra was a gorgeous automobile inside and out. The interior is amazingly well-equipped for 1989, including steering-wheel-mounted cruise control, power windows, locks, and exterior mirrors, and some of the most comfortable, supportive seats Toyota ever produced. 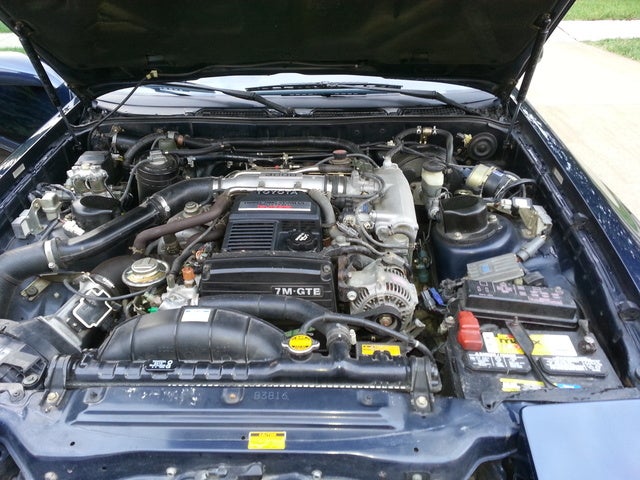 The base Supra is equipped with the 7M-GE 3.0-liter inline-six, which develops 200 horsepower and 196 pound-feet of torque. The Supra Turbo is kitted out with the 7M-GTE 3.0-liter inline-six with an intercooled turbocharger, bringing power to 232 hp and torque to 254-lb-ft. Both engines are available with either an R154 five-speed manual transmission or the A340E electronically controlled four-speed automatic transmission.

Contemporary reports put the Supra’s zero-to-60 mph time at around 7.5 seconds, and the Supra Turbo at as quick as 5.5 seconds. Quarter-mile times for the Supra and Supra Turbo were in the neighborhood of 16 seconds and 14 seconds, respectively. Compare that with a contemporary V8-drivetrain Corvette, and the numbers are nearly identical.

With a double-wishbone independent suspension front and rear, power-assisted four-wheel disc brakes, and power-assisted rack and pinion steering, these were impressive handlers despite their rather portly 3,459-pound curb weight. The available Sports Package included a limited-slip differential (standard on the Turbo), and Toyota Electronic Modulated Suspension (TEMS). Anti-lock brakes were the only other major option on the order guide. 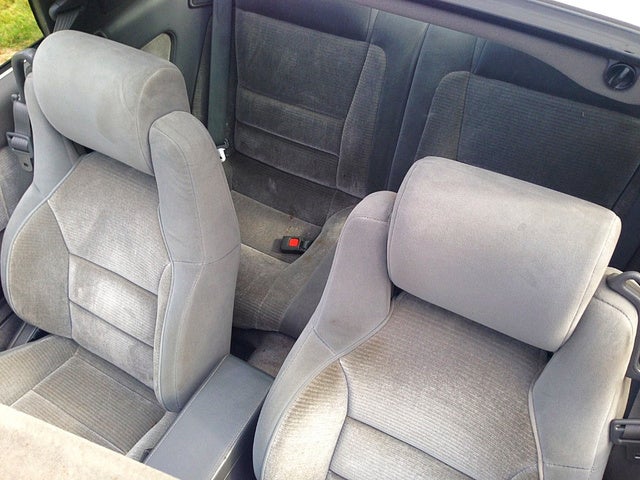 One of the Supra’s most attractive attributes is how well it works as an ordinary car when you’re not flat out on the interstate, or carving a mountain road.

The body style has some obvious limitations, especially if you’re a passenger in the rear. There are 24.7 inches of legroom back there, and that’s only if the driver is 5’5”. For all intents and purposes, the rear seat is for holding a light jacket. The cargo area, though, has more than enough room for a weekend’s worth of luggage at 11 cubic feet with the rear seat up, and 12.8 cubic feet with the seat folded.

The instrument panel is busy, with Chiclet-sized buttons festooning the center stack. But the analog tach and speedometer layouts are beautifully simple, with auxiliary gauges for temperature, oil pressure, and boost on Supra Turbo models. The seats were available in both velour cloth and leather, heavily padded and bolstered in both upholstery choices. Seat adjustments abound, with eight-way power fore, aft, headrest, lumbar and side bolster controls for the driver. 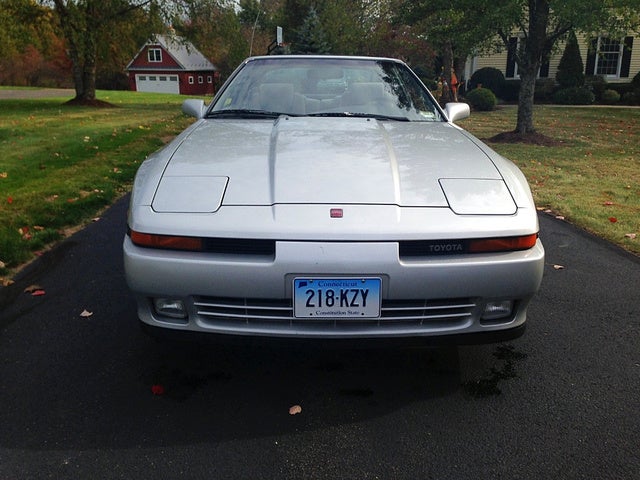 If the Supra is recognized for anything in 1989, it’s a tech-heavy passenger compartment. Some of that tech is optional, in the form of Toyota Electronically Modulated Suspension (TEMS), which includes an on-board computer that allows for adjustment of the suspension settings between Soft, Normal, and Firm for “maximum road feel.” Moving to the center of the instrument panel, the Supra features modern, automatic climate control with a digital readout, and a standard AM/FM cassette player with six speakers, five-way acoustic tone control settings, and an anti-theft system. Options include a single-disc CD player integrated into the head unit. 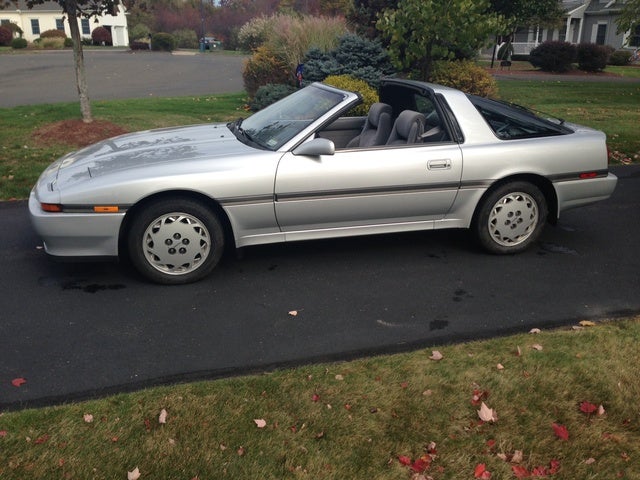 Safety equipment in the entire 1989 Supra brochure is limited to four words and a numeral: “3-point front and rear safety belts.” The 1989 Supra was still a year away from having a driver-only airbag as standard equipment. Those seatbelts were the subject of National Highway Traffic Safety Administration (NHTSA) complaint 847366 and 484127, where two Supra owners from Charlotte, North Carolina, and St. Just, Puerto Rico, both claimed that the driver’s belt failed without warning, failing to retract or tighten, thereby rendering the seatbelt useless. No injuries or deaths were reported due to either complaint.

The optional anti-lock brakes used a “computer-controlled system that helps prevent brake lockup during sudden stops," Toyota said at the time. There are no crash ratings for the 1989 Toyota Supra available, either from the NHTSA or Insurance Institute for Highway Safety (IIHS).

All of that puts the Supra among the most expensive Japanese cars of the era, yet significantly less expensive than the sports cars from either the United States or Germany. If you cared about fuel economy when you probably wouldn't buy a Supra, with its 15 city/20 highway mpg. Today, a 1989 Toyota Supra in excellent condition is something of a bargain, selling for half what a later fourth-generation A80 Supra would trade hands for on the open market.

Rebecca I have a Silver 1989 3.0i non turbo with one owner and 73K miles. Incredible condition. It has been in storage for just over 8 years. Anyone interested in giving it a good home? For mote info contact me at jasonhowling@yahoo.com

GuruN1Z1L This was my first car in High School back in '06 I loved this car to death but after I joined the military and my marriage made me choose between the car and my wife I had to slowly let her die. I still miss that car and it has a surprising amount of bells and whistles for an 89. Truly a masterpiece.

Have you driven a 1989 Toyota Supra?
Rank This Car

I am looking at buying an 89 supra with 68k original miles. I am worried about the head gasket problem. Is it too late to fix the head gasket now before it creates problems, or is the problem already ...

How Do You Turn On The Cruise Control And Set The Speed You Want To Be Held...

I just bought a 1989 Toyota Supra in Maryland and drove it back to Colorado. I didn't get an owners manual, and was trying to set the Cruise control. I tried all the ways I have ever had to set it, a...

A Month Ago, My 89 Supra, Started To Stutter At Times On Acceleration Or No...