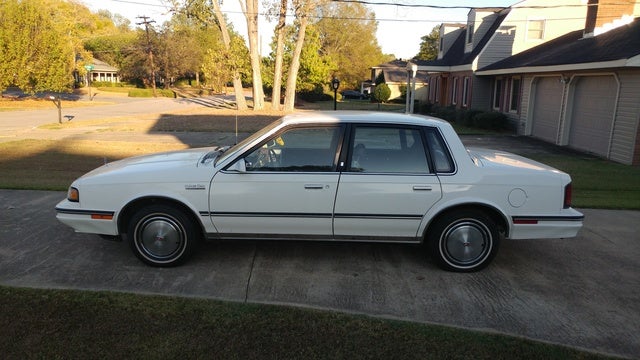 Have you driven a 1987 Oldsmobile Cutlass Ciera?
Rank This Car

great car really isnt to bad to drive ride quality is great shocks are so soft i dont feel bumps cost of ownership for an 18 year old = not bad appearance is plain and needed some zip but overall go... Read More

Although It's Definitely Not A Head Turner, But It Well Worth The Money I Spend ($8700 In 97) By Courtroom74

This car is not bad after all... who would think an 90s American car can go the distance, currently @ 183K miles. original engine, transmission, radiator,... only issue I had so far was water pump... Read More

A Love Letter To The Family Olds That My Children Call "goldilocks". By Trrpnflyr

This car was already past it's prime with 260K on the clock when purchased. It now has 282K and pulling strong. Engine runs pretty much like the day it was built save for an intake manifold leak and a... Read More

Ok For A Daily Driver. By mikec

I like the general look of the car, but have several dislikes. I dislike the fact that it lacks cup holders, has the original radio, has no rear ac vents on the floor or ceiling. However, do like th... Read More

A Great Vehicle. By oneangrypeople

Tough to beat for a first car. Very reliable and great in the snow. Super visibility. I wish they still made cars liker this. Engine is easy to get around while working on it. Decent power and mpg for... Read More

Fell In Love With It, Bought It On The Spot. By Pat_Los_Gatos

Really enjoy road trips in this car. Bought it in July 2013 in Florida and drove it to St Paul in late July. AC worked great, cruised at 72mph the whole way, smooth ride, good sound, lots of space to... Read More

this car is costing too much money too fix all the time ....I have had many problems with this ..its v-6 3300 has 140,000 miles anything from the computor to fuel injector. also injector regulator he... Read More

The Lard Wagon By Nowell3

My car is beautifully ugly. As we say in Spanish she is "La Fea mas Bella" works like a horse and tries to maintain her status as a fallen diva of Auto World. She has power windows which still work,... Read More

A Well Built American Eurosport Style Sedan - That Was Well Ahead Of Its Time. By robs71redriv

A low production special edition of the very popular Ciera line - Less than 2000 produced so you dont see one every block or county for that matter. The International Series is like the ads used sa... Read More

Have you driven a 1987 Oldsmobile Cutlass Ciera?
Rank Your Car →