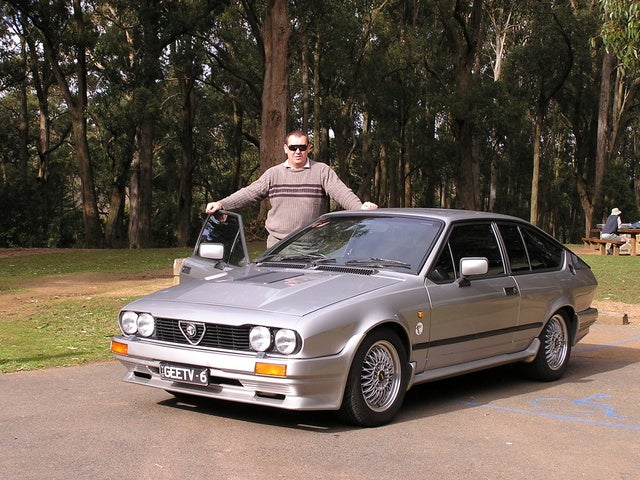 Have you driven a 1986 Alfa Romeo GTV?
Rank This Car

My Love Affair Car By Wivienne

i owned a red alfa romeo GTV V6, this is one of the best car that i have ever owned, it has stylish look, performance with the musical sounds of the classical alfa v6 engine, the handling is superb an... Read More

My Love Affair Car By Wivienne

i own a red alfa romeo GTV V6 and it is the best sport car i have ever own. I love its stylish Italian looks, amazing performance with musical souds of the classic alfa V6 engine, superb handling with... Read More

Why Do I Love Alfas By alfaoldfart

This is the third alfa I have owned and just love them for there style and performance, but you have to expect major issues with them certainly with the electrics. The one I own at the moment is a spi... Read More

great looking car but suffered from typical alfa romeo reliability. mostly easy fixes carried out by a competent mechanic had plenty of power and weighed very little due to the all plastic body pane... Read More

handles alot better than my old one, which hit a tree... may not have the build quality of say a german car, but streaks ahead in the design front :) lovely black momo leather, with the alfa logo embo... Read More

The 3.0V6 is powerfull and springs a suprise to many more expensive Sports Cars. Handles great, although does have a tendancy to spin the wheels in 1st & 2nd when driven hard. You have to put up with ... Read More

Great Fun If U Like A Italian! By Monarch_166

+ Awesome feeling of the engine + Beautifully crafted V6 +The robus feeling u get sitting in the car -The quality of the electronics The costs to maintain the car are pretty normal when living in e... Read More

The Love Triangle... By Steph

This is my other halfs car also known as the 'money pit' as it's always needing something spending on it and yet he still worships it need I say more!?... Read More