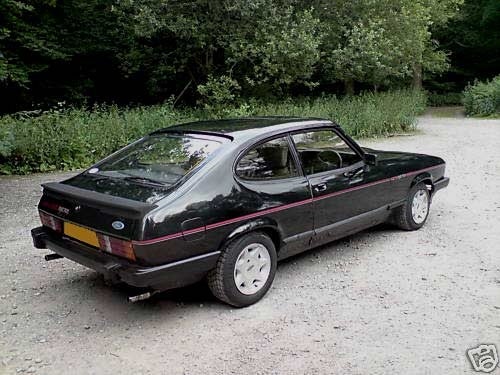 Have you driven a 1985 Ford Capri?
Rank This Car

Great fun to drive with the top down Performance pretty good for a car this age and small engine I have only spent a small amount on this so far more to go styling is fine but the paintwork needs doin... Read More

The car you always promised yourself. I've owned 3 capri's in my life, a 1.6, a 2.8i special and now a 2.9 twin turbo. Much money went into this old girl, transforming her from a Turbo Technics 2.8 in... Read More

Wish I Could Afford To Have Kept Her By Mathew405

stunning sporty look, rugged, strong and reliable. although not.. it felt like a real muscle car i loved its solid build quality and its sleak sporty curves. you instantly turn heads when you drive pa... Read More

Driving the capri is the most fun you can have in a car with your cloths on. Parts are quite hard to come by now but never the less i wouldn't change it for the world.!. The 2.0 pinto engine is good s... Read More

My Thoughts By Gareth

Its a Capri....there aint many around and it turns heads....plus i love 80s fords,been into them all my life and ive always wanted a capri from a very young age,plus its a 2.8i V6 so its not exactly s... Read More

Great Car And A True Classic! By Raymond

Bought this car in 1998 and had it for 8 years and the original engine and transmission were ok but not refined and did not have the most ideal torque/rpm match. I swapped engines with another ford an... Read More

Classic car Performance: nothing special Build quality: good Appearance: cool Cost of ownership: a lot off money for restoration Fun factor: This is car for weekends and for hobby, but it fun to drive... Read More