Essentially a Mitsubishi Mirage, the 1982 Dodge Colt (and its sister Plymouth Champ) was a 2-door front-wheel drive hatchback, an affordable subcompact that proved to be a popular city car. New in the 1982 Colt was a four-door hatchback. Both 2 and 4-doors came standard with a 1.4-liter, 4-cylinder engine, with an option to upgrade to the 1.6-liter, 85-hp engine. Though a 4-speed manual transmission was standard, a 3-speed auto tran was optional.

Being a lightweight, subcompact, the 1982 Colt didn't need much engine to be pretty quick on the road. A fuel economy around 27/34 mpg was another attractive feature that lured many first-time buyers, and the new 4-door hatch made it a practical car for families as well.

But this deceptive little hatchback had a double life. Commuter car by day, the Dodge Colt also made frequent appearances on the rally circuit, coming in third several times over the years. In 1982, it placed third again, behind an Audi Quattro and Mazda RX-7 on the snow-covered roads of the Sno*Drift rally in Michigan.

Have you driven a 1982 Dodge Colt?
Rank This Car 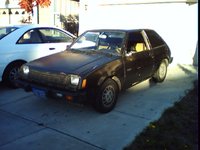