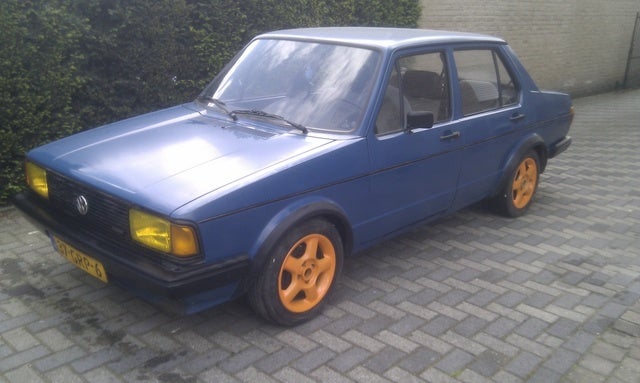 Still just dipping its toe into the economy compact sedan market, the 1981 Volkswagen Jetta was proving to be more popular than its hatchback cousin, the Golf. Based on the same platform, its distinguishing feature seems to be the huge trunk, and its appeal in the U.S. probably stemmed from the fact that a sedan looks more versatile (as either a personal or family car) and sophisticated than a hatchback.

New in the 1981 Jetta 2-door coupe and 4-door sedan was an engine boost from 1.6-liters to 1.7-liters and 90 lb-ft of torque. With the 5-speed manual transmission, the car reached 74-hp. A 50-hp diesel engine was optional, as was a 3-speed automatic. The interior was fairly austere, with most features only available as options, but the Jetta's purpose was function over form.

Owners say their 20-something-year-old Jettas are still running almost as well as when they first bought them, with a durable engine and rust-free exterior built to last. They give the large trunk, crisp handling, and great fuel economy high marks. The 1981 Jetta gets complaints about its plainness and lack of engine power, particularly when going up hills with the automatic.

What's your take on the 1981 Volkswagen Jetta?

FeministCarLover Bought the car new, drove it over 300,000 miles before trade-in (for a kid carpool car). Sat in the lot and cried on the curb until I had to sign. Huge trunk and fun to drive -- especially with the manual transmission!

Have you driven a 1981 Volkswagen Jetta?
Rank This Car

How To Set Engine Timing

I did an engine overhaul on the car. Its running fine but i cant get the timing right. At around 100km/hr it starts to ping. I cant get pass that speed. Also as it warms up the engine idle increases. ...