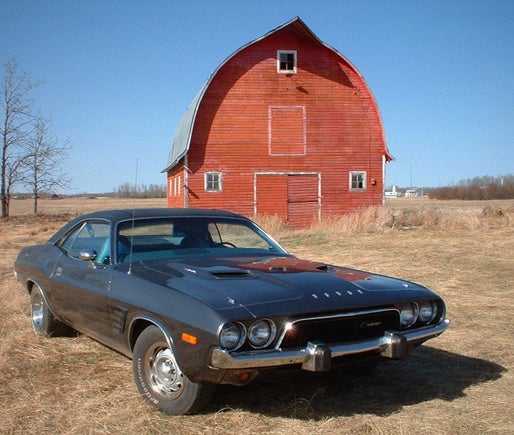 It's back! Well, sort of. The name is back anyway. Built on a Mitsubishi Galant Lambda platform, the 1978 Dodge Challenger is a far cry from its smoking muscle car namesake. In response to the energy crisis, this Challenger emphasized economy and comfort over speed and performance.

Comparable to the Honda Prelude and Toyota Celica, the 1978 Challenger was a 2-door coupe with rear-wheel drive. Standard models featured a 4-cylinder 2.0-liter, 77-horsepower engine with 5-speed manual transmission. Optional was the 2.6-liter, 105-horsepower SOHC engine and a 3-speed automatic transmission. The 2.6-liter was quite large for a 4-cylinder engine, and gave the Challenger some surprising verve. The vibrations and rattle you'd expect with such an engine were reduced by the "Silent Shaft" system -- counterrotated balance shafts. The result is a relatively quiet smooth ride with more power than comparable cars of its class.

Trying to capitalize on its sporty ancestry, the car was offered in bright colors with the option of tape striping. Inside were an array of optional electronic gadgetry and controls for power windows, power side mirrors, rear defrost, cruise control, a clock and other electronic readouts.

What's your take on the 1978 Dodge Challenger?

harcrob We have a 1978 Dodge Challenger what was restored but recently got into an accident and damaged the front left side. We would like to sell the whole car to someone for parts. harcrob@cox.net

Have you driven a 1978 Dodge Challenger?
Rank This Car

I Own A Almost Perfect Condition 1978 Dodge Challenger Purchased New By Mys...

272 views with 3 answers (last answer about a year ago)

Does Anyone Have A 78-82 Challenger They Want To Sell?

I owned one, and I wish I still had it

Is there any v6 or v8 motors that bolt into a 78 Dodge Challenger? If not... Does anyone know where to find a replacement 2.6L silent shaft motor?