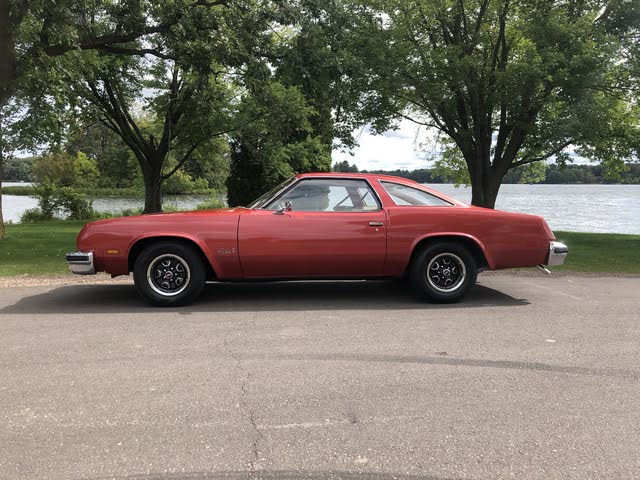 Have you driven a 1976 Oldsmobile Cutlass?
Rank This Car

Its got a few dents and dings but its a good family car other than it getting hot, there isnt much wrong witg it it started about a week ago i think it may be air locked or thermostat is sticking its ... Read More

It Doesn't Go Very Far Any Longer. By dpollock

It's not exciting, has a few issues with leaky gaskets and its not the most fun to drive vehicle I've ever owned. At the same time, it gets good fuel milage, other than the gasket thing, not expensiv... Read More

I liked the style of the car. It had a rear spoiler that kind of set it apart. I especially liked the alloy wheels that came standard on it. The V-6 engine was a good compromise of power and good g... Read More

The Cutlass By Kevin

My first car, was passed down to me through my sister, I had about 150,000 miles on it when i drove it in 2005, not a bad car to learn the basics of engine repair, it went through a gallon of engine c... Read More

The Beast By BADAZZ

I have put over 16000 in this car and it was worth it. The paint job, motor, insides, rims, and a 1500 sound system. It took me over four years to finish and the best thing in the world no rust spots Read More

The car is a good car all around. Had consistency issue before we put the 9 inch and slicks on it now it is a little more consistant. The car used to run anywhere from a mid 15 seconds down the quart... Read More

A daily driver car i ones had. A lot of smal problems with the car, thats why I exanged it later on. Just a 305 chevy motor in it, not the fastes engien, but it worket, most of the time. Old disel ca... Read More

My First Car By Nel

This was my first car, and like most first cars you either loved it of hated it. It was a little of both for me. The best thing that this car did for me was turn me into a mechanic. I learned to fi... Read More

Have you driven a 1976 Oldsmobile Cutlass?
Rank Your Car →