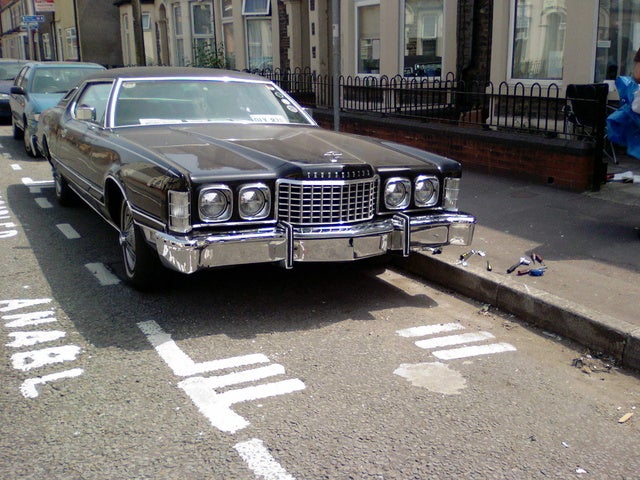 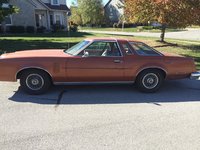 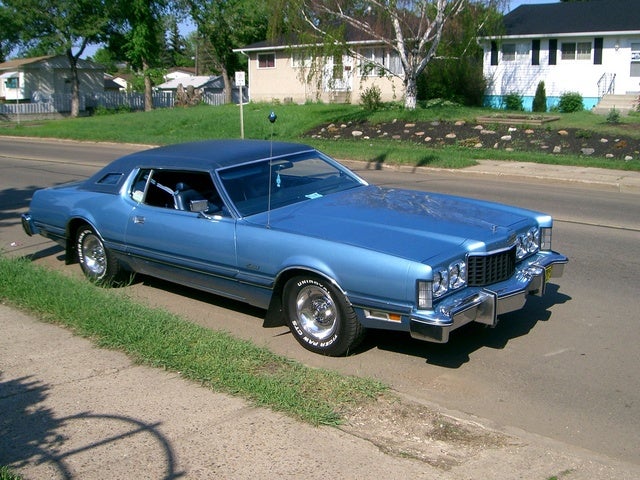 The era of the 'Big Bird' Thunderbirds came to an end not with a bang, but a whimper. The 1976 Ford Thunderbird saw almost no changes; even the endless game of front-end origami seems to have been on hold, as the car that shipped off the line looked pretty much exactly like the previous year's model.

That was just fine with buyers who wanted the big luxury stylings of the '76 Thunderbird. Its long, long front end; its two-and-a-half tons of Detroit steel; its plush, cozy cabin; its jazzy, chrome-embellished cockpit; all of these appealed to a market segment looking for a certain vision of class. And then there was the comfort factor; the '76 Ford Thunderbird was a real land-yacht, a boat to navigate the highways in style.

You needed plenty of engine to haul that much car around, and the 1976 Thunderbird did not disappoint in that regard. Its 460 cubic inch, 7.5 liter Lincoln V-8 mill put out an impressive 280 horsepower and 300 lb.-ft of torque. That kind of muscle under the hood may have qualified the '76 T-Bird as a classic performance car, but it was hard to see the TBird's sports car roots in this huge sedan.

Even so, the 'Big Birds' might have found a more loyal following if it hadn't been for their drinking problems. They just couldn't stop guzzling fuel; their 8 mpg city, 11 mpg highway fuel efficiency rating scared off a lot of potential buyers in an era of gas shortages and long lines at the pump. With all this in mind, the guys in Dearborn headed back to the drawing board to create another new incarnation of the Thunderbird.

What's your take on the 1976 Ford Thunderbird?

1big1littlebird mine runs great I special ordered it .its a Bordeaux with a moonroof.its loaded .I only have 28,000 miles on it. its kept in the garage. just like my 57 t bird I restored from ground up and has a rare supercharged 312 and 2 tops.

Have you driven a 1976 Ford Thunderbird?
Rank This Car

I Have A 76 T Bird, Have To Press Pedal Very Hard For Brake Lights To Come ...

84 views with 3 answers (last answer about a year ago)

'76 Thunderbird Chokes Up Between 30mph And 40mph

The car runs and accelerates well except when it hits between 30mph and 40mph. It's almost like either the engine chokes up or the transmission won't shift gears properly between 30 and 40. Past 4...

How Would I Obtain Details Of My "Big-Bird", Such As The Production Date An...

I bought this car in 2006 and since have discovered, via the VIN, a lot about the car I did`nt know. Would it be possible to find out on what day it came off the production line, who ordered it and ...

Which Came First, The 1973 Thunderbird Or The Lincoln Mark IV?

Removeal Of Stainless From Rockers?

what is the best was to remove the stainless moldings on the bottem of my 76 project car? i don't wasnt mess thrm up, because after painting, i'm going to reinstall them. i know there are a lot of cli...