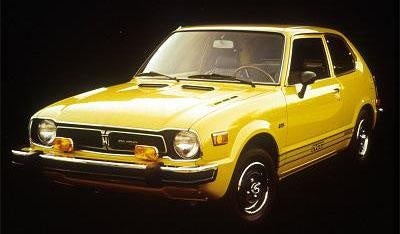 This was the first year that Civics were widely available in the U.S. Even in 2006, there are still a few 1975 Honda Civics on the road, a fundamental reason why Honda's reputation has only improved over the years.

Honda introduced its Controlled Vortex Combustion Chamber this year, which meant the car could meet emission standards set by the first Clean Air Act without needing unleaded fuel or a catalytic converter. Not only did this help the '75 Civic meet the EPA emissions tests, it also got it the top rating for fuel economy.

And, in 1975, two new Civic models became available to address consumers' desires: a 5-speed transmission and a station wagon. Even though still relatively new, Civic sold more than 100,000 cars in the U.S. in 1975.

Continuing with a later day Civic-obsession, the '75 Civic appeared in movies like Crocodile Dundee II and Stop! Or My Mom Will Shoot.

Pale_Horse Had a College girlfriend that had a 1976 Civic. back, Great little car. I remember the car better than the girlfriend. Car was great, girlfriend wasn't.

GuruLK838 I had one gold in color. It was a 4 speed manual with heat and an am-fm radio, period!! It also had a manual choke which living in northern Illinois worked very well!! It was great transportation even though basic as it was.

Have you driven a 1975 Honda Civic?
Rank This Car