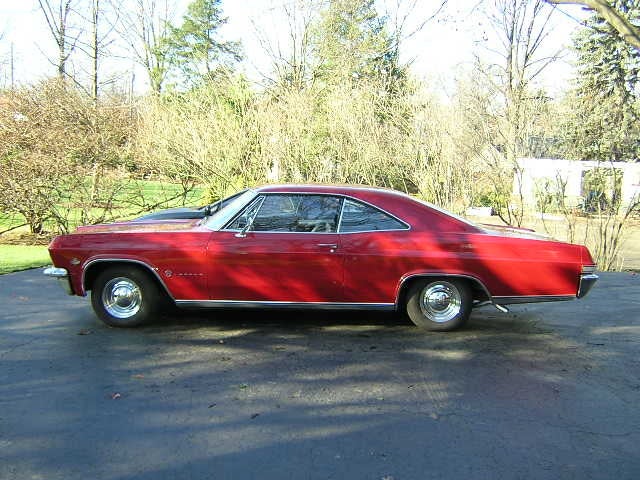 The 1965 Chevrolet Impala was a gorgeous car. The exterior was smoothed out from years prior, giving it more of the "rocket" look for which Chevy seemed to be striving, as the battle to reach the moon first raged elsewhere.

The car sold very well, with 239,500 units sold. There has been some confusion over the "million car" mark. Some believe that Chevy sold 1 million Impalas in 1965 alone, but the company actually sold their millionth Impala in 1965 - that number included cars sold from all years since its launch in 1958.

Impalas again had an impressive array of engines, including a 396 descendant of the "mystery engines" of years prior (which turned out to be 425s). Available engines ranged from the base 230-ci Inline 6, rated at 140 horsepower, to the 283 V8, rated at 195hp with 2BBL carburetor or 225hp with 4BBL carb, on up to the 409 V8, rated at 400 horses. Transmissions included the standard three-speed synchronized manual column shift, a two-speed powerglide automatic, or a four-speed manual transmission. A three-speed turbo-hydramatic became available in mid-1965. Body styles included a 2-door hardtop, 4-door pillared sedan, 4-door hardtop (Sport-sedan), and a 4-door station wagon.

What's your take on the 1965 Chevrolet Impala?

Have you driven a 1965 Chevrolet Impala?
Rank This Car

What Was The Production Numbers For Different Models

How Do You Attach The Lower Windshield Molding On A 65 Impala?

I have a 1965 Impala SS. All the molding was off when I got it so it's been fun sorting out the chrome puzzle. Anyway, all of it is kinda easy except for the molding that goes at the BOTTOM of the ...

814 views with 2 answers (last answer about a year ago)

What Is Wrong With My Car?

Why does my car overflow?