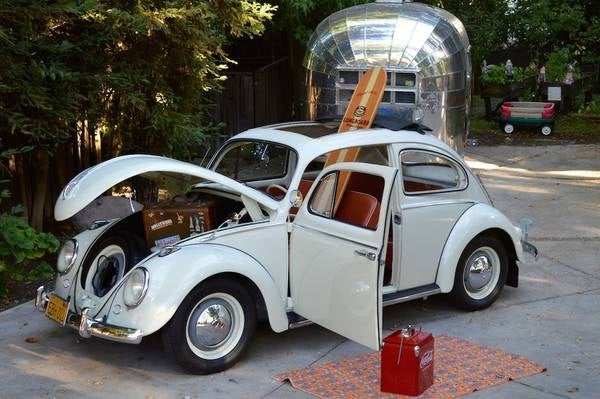 Volkswagen made minor changes to its popular Beetle for 1960. In an effort to upgrade the steering system, upgrades were made to the steering wheel (which was recessed for safety) and the steering box, and a steering dampener was added. The seat backs were recontoured, and the outside door handles were revamped with a push button (instead of a pull-type). In addition, the output of the generator was increased from 160 to 180 watts.

Other than that, the Volkswagen Beetle remained essentially the same as it had been in previous years, which was part of its appeal. In a year when sales of other foreign cars were dropping, the Beetle's sales remained steady, probably because the car was dependable, easy to maintain, inexpensive to own and drive, and unique.

As in previous years, the 1960 Beetle came with a four-cylinder, four-stroke 1200cc air-cooled engine that generated 36 horsepower. It was mounted in the rear, so that its weight provided traction to the rear wheels. A four-speed transmission, independent front suspension and telescopic shock absorbers were also part of the Beetle package.

What's your take on the 1960 Volkswagen Beetle?

Ttomgirl Was there a change in the tail lights for the 1960 bugs. My dad owned one and lives out of state and I showed him pictures of the bug ( 1960 ) that I have, and he's saying there's no way my bug is a 60. So I don't know enough about them. Always wanted one my whole life and I'm learning as I go. Also I have seen where there are some bugs (60's) with the back side windows that pops out. Is it hard to change the ones I have to that? Is it possible, and it will it depreciate the overall value of my bug?

60BugVet I owned a 1960 Beetle Deluxe Sedan. Loved it. Artic Blue in color, a blend between light blue and white. No gas gauge, only a kick lever next to the gas pedal with 1-gallon reserve of gas! Ran out of gas the first day I drove it and called my dad who told me to find and kick the lever to the side for more gas. LOL

Have you driven a 1960 Volkswagen Beetle?
Rank This Car

I just recently purchased a Dune Buggy on a 1960 VW chassis. I was wanting to know what engine came in the 1960 VW. Also was there any issues, mechanically that I should be concerned with.

657 views with 3 answers (last answer about a year ago)

im getting a 1960 beetle from a buddy and i was wondering what a fully restored 1960 beetle is worth?

Im looking for what the value of my 60 beetle might be worth? It has unique features such as a spare gas reserve, no turn signals on fenders, only on door jams, and has oversized headlights. Any info ...

Is there a diagram or pictures showing the linkage for the cooling system and thermostat for a 36 hp motor? Thanks Dave

The Singnal Indcators That Are Inbetween The The Side Windows. They Pop Out...

this model bettle has pop out singnal indicators. I need to know how I get parts