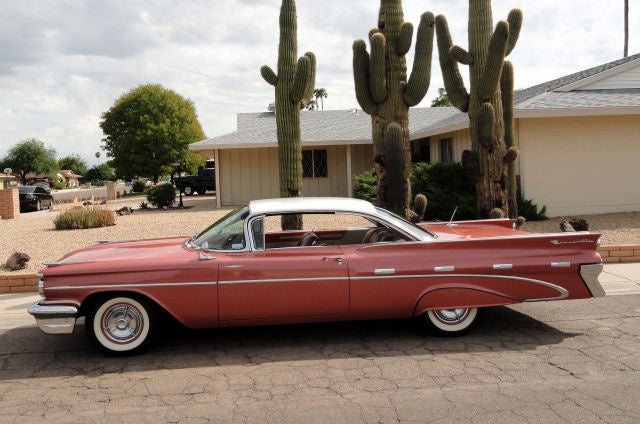 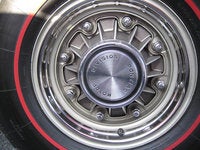 Two significant design innovations that have become associated with the Pontiac brand were introduced with the 1959 Pontiac Bonneville. Now in its third year, the Bonneville added a Vista sedan and Safari station wagon to its coupe and convertible lineup. But the biggest change this year was the Wide Track design, engineered to improve handling and offer more precise cornering with less roll. In the 1959 Bonneville, this meant the wheelbase was widened out five inches from the previous year. Wide Track became a hallmark of Pontiac cars for years to come.
Though less performance-oriented, the other new design for 1959 was a unique split grille, which also became a Pontiac signature up to the present day.

The 1959 Bonneville was marketed as a sporty luxury car, aimed at men who wanted a little fun behind the wheel. The Safari wagon focused on women homemakers who needed a car to transport the kids. Though standard features were minimal, a host of options were available. Inside, carpeted doors and walnut trim projected the image of rich, lush luxury that was sought after at the time. Leather seats were standard on the convertible, while vinyl came with all other trims. Six horsepower options were available with the 370 block V8 engine, ranging from 255 to 330, and depended on whether you had a four-barrel carb or TriPower carb. Only a 4-speed Hydramatic auto tran was offered. Indeed, the 1959 Bonneville was the most expensive car in the Pontiac stable.

What's your take on the 1959 Pontiac Bonneville?

yamaracer I owned a '59 Bonneville convertible from '68 to '74. Tri-Power & Limited slip diff. The car was fast & handled as on rails. I loved that car.

GuruVGC59 My father bought a 1959 Pontiac Bonneville ne from the dealer when I was 16. Shortly after he bought it he lost a leg, and I wound up the virtual owner. It was a big V-8 (I forget the displacement). It had all the option of the time period. I loved the car, I wish I could find one in good condition.

Michael Error in engine displacement state. It was a 389. In Tri-Power tune it had a maximum horsepower of 345.

Have you driven a 1959 Pontiac Bonneville?
Rank This Car

What Are The Factory Option Codes For 1959?