Sales person was pleasant and tried his best to be helpful. Huge disappointment was Antelope Valley listed the vehicle at one price then after 1 and half drive to see the car they had a 800.00 higher price one the car due to a dealer installed aftermarket/secondary Karr Alarm that the would not remove/deactivate or negotiate on. Walked away from the deal. 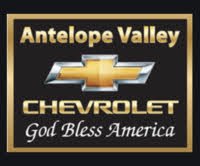 Very good communication. Car was stored at an off-site lot and dealer was very good about getting it for me. Very clean vehicle, good on them for storing the cars underground and keeping them ready for test drive. In the end I purchased a different vehicle, but through no fault of this dealer's.

They are very professional

A complete waste of time. I went a looked at a vehicle, went back and was ready to purchase the vehicle after getting in touch with my bank to secure financing. Went to start the paperwork with Daniel Cho and was told I needed an additional 5K for a down payment after I told them I could give a payment of 5K. Do not spend your money or time here. They also offer you a 15$ gift card to Starbucks if you leave a good review on Yelp. So be weary of the good reviews.

The people are great there!!! Great customer service!!!

The response from the dealership via email was great and on time. However I have not gone out there to test drive the car yet.

They were timely, responsive, and their responses were focused on the truck I asked them about. Many other dealerships would respond to me asking to buy my car, or sale me something I didn't ask for. I really appreciated DC Ford of Thousand oaks for their professionalism corresponding over email.

Dealer was prompt to make contact and included the information I had requested.

Got just what I wanted thanks cartag USA!

I didn’t go, but they were very nice on the phone!

I purchased the car. The sales associate Mark and the office lady, Rocio, were both very nice and professional. They were accomodating and kind. Negotiating went as one would expect but overall I enjoyed the experience and the car.

Car was listed for one price called got told to put an application in to qualify for the vehicle and I did. Later on the day they call me back saying that I was qualified but that the car had gone up $2000 dollars because the mechanic had to fix something on the car. I was upset how are you going to run my credit send it places to get me qualified if you don’t have the final price on the car very unprofessional don’t recommend at all.

The staff made the experience very easy

Purchased T-Bird from them. Nice salesman we worked with and delivered what they promised. The car is in wonderful condition, serviced by them, 32 point check, detailed and received when promised.

Great experience. the agent Sorrinder was wonderful. I was looking for a fully loaded vehicle. there were a couple options missing that he didn't inform me of after probing, but i imagine they are not in the business of helping your find reasons not to buy your vehicle. the missing items were not something to keep me from buying the vehicle and i assume he honestly didn't even realize it, Besides that everything about their sales process and the people at this dealership are great.

Your dealer ratings help others find a great deal from a great dealer. Please rate only dealers you have dealt with directly.

For anyone who’s not necessarily “into” cars, the local Subaru dealership is the land of Outbacks and Foresters, those hardy all-wheel-drive (AWD) vehicles known for powering over the piles of snow in the driveway and basically just offering great all-around practicality for the price. But for a much smaller subset of drivers, the local Subaru dealership is the quickest route to a new WRX, the 4-door 4-seat sedan model known for offering great driving dynamics for the price—especially the WRX STI, a slightly more performance-oriented version of the WRX that's covered separately here at CarGurus. But the WRX offers utility as well, enough reliability and cargo space to justify ownership for those who straddle the line between track-day enthusiast and die-hard commuter.

The WRX saw a major redesign for the 2015 model year and so its updates remain minimal for 2017 (keep in mind the WRX was the Impreza WRX before the redesign). The model is still available in three trims: Standard, Premium, and Limited. As with all Subarus, the automaker’s “Symmetrical” AWD system comes standard on each trim, moving torque between the wheels in order to maintain grip during the tight cornering any seriously driven WRX is likely to encounter. There’s also no WRX hatchback, though that’s likely old news at this point, as the Impreza WRX hatchback didn’t actually make it through the redesign a couple years back.

All WRX trims are powered by a turbocharged 2.0-liter 4-cylinder engine producing 268 hp and 258 lb-ft of torque, decent if not phenomenal numbers for a vehicle of its size and weight (the WRX actually lost weight during the redesign). The engine cylinders are horizontally opposed—another universal feature among Subaru models—lowering the WRX’s center of gravity and making for a more evenly powered drivetrain. A 6-speed manual transmission comes standard, and the Premium and Limited offer an optional continuously variable transmission (CVT), which Subaru dubs the “Sport Lineartronic,” and which includes paddle shifters and a manual mode. EPA fuel-economy numbers for the 2017 model check in at 20 mpg city/27 highway/23 combined with the manual and 18/24/21 with the CVT.

There are, of course, a few changes for 2017, as there must always be when an automaker christens a new model-year vehicle. But the changes are very few. A new tricot headliner graces the interior, and the base Standard trim finally offers auto on/off headlights. WRX Limited trims equipped with Subaru’s EyeSight safety system also now include Reverse Auto Braking.

The WRX Standard starts off with cloth upholstery and Subaru’s Starlink infotainment system routed through a 6.2-inch touchscreen display. The Starlink system features an AM/FM stereo with a single-disc CD player, SiriusXM satellite radio, HD Radio, and familiar wireless features like Bluetooth connectivity and Pandora radio. The Premium adds items like heated seats and a moonroof (not to mention the CVT). And the Limited introduces luxury features like leather seats, an 8-way power driver’s seat, and LED low-beam headlights. An upgraded Starlink system is available (standard on the Limited), with SMS messaging capability and a 7-inch high-resolution touchscreen with multi-touch gesture control. Those looking for better sound can also opt for a Harman Kardon audio system. A rear-view camera comes standard on all trims.

A good reason for choosing the WRX Limited is that it offers EyeSight (mentioned above), Subaru’s highly rated proprietary safety system. EyeSight uses a special camera setup to provide exceptional vehicle awareness and is integrated with the adaptive cruise control, collision-prevention braking, and lane-departure warning systems. It also includes steering-responsive fog lights, which react to the vehicle’s speed and steering angle in order to provide additional illumination in the direction of the turn. Choosing the EyeSight package for the Limited also gets you the Harman Kardon sound system, keyless access, and push-button start. The National Highway Traffic Safety Administration did not test the 2016 WRX, but the model did earn a top score of Good on every test with the Insurance Institute for Highway Safety, along with the IIHS’s coveted Top Safety Pick+ rating. The WRX will afford unusually good peace of mind to those who jump inside in order to do the kind of hard rally driving for which it’s essentially designed (though perhaps, in that case, the cruise control won’t matter quite as much).

The Subaru WRX more or less represents one of those cars that probably isn’t quite for you if you don’t already know about it. The driving enthusiasts who want an affordable car to power around the track or roadways are going to know to look here. And the WRX certainly is affordable, with the 2017 model starting just north of $26,500 and reaching close to $31,000 for the top-tier Limited. Come on—it’ll even hold your groceries and dry cleaning on the way home.

Top rated dealers near you with 2017 Subaru WRX for Sale