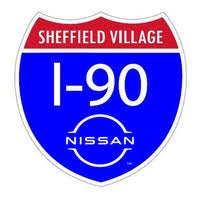 The Murano, Nissan’s V6-powered midsize crossover, was introduced for the 2003 model year. Aside from the strange and much-derided Murano CrossCabriolet, the Murano has been a successful and important part of Nissan’s North American lineup and one of the better-rated midsize crossovers in a competitive segment that includes vehicles like the Ford Edge, Toyota Venza, and Hyundai Santa Fe. With its more luxuriously appointed range-topping trims, however, the Murano is almost more comparable to straight-up luxury vehicles like the Lexus RX. It’s also one of the better-looking crossover SUVs out there, with sharp sculpting on the sides of the body, a subtle integrated rear spoiler, and other styling cues that help it stand out at least a little from blander-looking crossovers.

A third generation of the Murano came out for 2014, along with the second generation of the popular Rogue compact crossover, so the 2017 Nissan Murano is not much of a departure from the 2016 version. Available in Platinum, S, SL, and SV trims, the model can be equipped with either front- or all-wheel drive (FWD or AWD).

The Murano has never been one of the stronger performers in its class, but nobody buys a car like this to go fast. Its 3.5-liter V6 makes an adequate 260 hp and 240 lb-ft of torque and is mated to a continuously variable transmission (CVT) that has been praised in comparison to other CVTs. Every trim level on the Murano comes standard with FWD, and AWD is optional. The CVT means you probably won’t be doing any kind of off-roading, though, so the standard FWD should be adequate for anyone who doesn’t have to deal with a lot of snow or the occasional slog through the mud. Then again, it’s worth noting that opting for AWD means a sacrifice of less than 1 mpg, and both drivetrains have the same EPA rating of 21 mpg city/28 highway/24 combined, which is competitive with other vehicles in this class.

The Murano has an electrohydraulic rack-and-pinion steering system, and both steering and suspension have obviously been set up more for comfort than performance. There is reportedly plenty of body lean in the corners, but on straight bits the Murano will soak up the bumps in the way you’d expect from a tall daily driver. Although 18-inch wheels are standard, the available 20-inchers do noticeably improve the overall look.

Just as the Murano stands out in terms of exterior styling, it’s a noteworthy vehicle on the inside as well. The cockpit is roomy, with a low-set instrument panel and matte-metallic trim around the steering wheel. There is plenty of headroom both up front and in back, and the rear seats fold flat for extra storage space--of which the Murano already has plenty. There are even nifty storage bins next to the footwells.

Dual-zone automatic climate control is standard, as is a 6-way adjustable driver’s seat, a rear-view camera, a 6-speaker sound system, and the NissanConnect infotainment system. Stepping up to the SV adds power-adjustable seats up front, remote start, a navigation system, fog lights, a roof rack, a leather-wrapped steering wheel, and an 8.0-inch screen with voice recognition for the infotainment system. The SL comes with leather upholstery, heated front seats and mirrors, an 11-speaker Bose audio system, blind-spot monitoring, and a surround-view camera. The Platinum, meanwhile, takes things to the next level with climate-controlled front seats, heated and power-folding rear seats, and a heated steering wheel, as well as 20-inch alloy wheels and LED headlights. One of the convenience packages, called the Technology Package, comes with a moonroof and several high-tech safety features.

Speaking of safety, the Murano has received a 4-out-of-5-star rating on government crash tests and has coveted Top Safety Pick+ status from the Insurance Institute for Highway Safety. Hill-start assist is standard, and both the Murano SL and Platinum trims come with rear cross-traffic alerts and blind-spot monitoring. The aforementioned Technology Package comes with a forward-collision warning system with automatic emergency braking and adaptive cruise control.

For people who don’t quite need every inch of interior space the Murano has to offer and would be fine with a little less power, the 4-cylinder Rogue is a worthy alternative. On the other hand, for people who want a lot of comfort and convenience features but don’t absolutely have to have a luxury-brand badge to impress their friends, a loaded Murano represents pretty good value, and the 2017 model is still distinctive enough to keep it interesting.

Top rated dealers near you with 2017 Nissan Murano for Sale