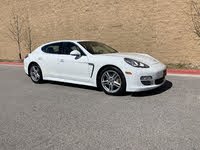 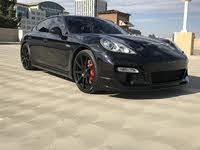 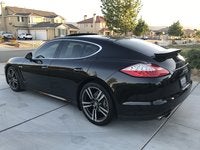 Question About My Panamera

I have a 2018 Panamera that I purchased last year. In the cold and damp weather when I pull out of a parking spot or out of my driveway and turn the wheels sharply the front end jerks violently and ...

Why Is My Porsche Not Going In Reverse?

My 2010 Panamera Porsche 4S said transmission default and will not reverse but will drive forward. Anyone knows about this?

I cannot locate my title paperwork. I have the current registration, etc. Will this be a problem?

I Am Not A Dealer. Can I Advertise My Vehicle For Sale

How do I list the related car on CarGurus?

PANAMERA 4 VS. THE 4S. WHAT IS THE DIFFERENCE?

WHAT IS THE DIFFERENCE BETWEEN THE 4, AND THE 4S MODELS?

141 views with 1 answer (last answer about a year ago)

An automaker that prides itself on its successful racing history and legendary sports coupes will enter a new competitive arena next year when Porsche introduces its highly anticipated four-door sedan for the 2010 model year: the Panamera. The company has produced four-door concepts and prototypes in the past, but the new sedan will be Porsche's first-ever full-fledged production sedan. Originally scheduled for the Geneva Auto Show in March, Porsche pushed back the Panamera's debut one month and moved it to Shanghai in recognition of the increasing size and importance of the Chinese auto market.

Porsche plans to offer the Panamera with three engines: a 3.6-liter, 300-hp V6 currently used in the Cayenne; a 4.8-liter, 405-hp V8; and a turbocharged version of the V8 producing 500 hp. The V8s will be the first eight-cylinder engines offered in a production Porsche since 1995, and many expect the Carrera GT's V10 and a diesel V12 will eventually be offered in the sedan. All versions will include Porsche's new PDK dual-clutch transmission.

Spy photos and videos first appeared in early 2007, but official images and details for the Panamera are now available on a Porsche microsite. Reactions to the design have been very mixed, and while many expect the car will be a huge hit as soon as it's available, many longtime Porsche fans and critics have said they strongly dislike its looks.