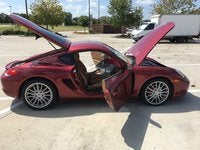 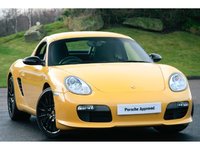 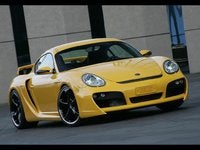 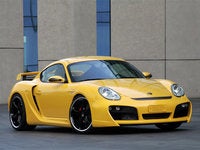 The Seller Has Not Answered My Questions

How Do I Change My Search Criteria

Does Cargurus Have Such A Thing As Customer Support?

TERRIBLE User Interface. Do you have such a thing as Customer Support? Telephone Number? Thanks

does my phone number appear in my advertisement so potential buyers can reach me?

Can I Add Carfax To My Private Seller Listing?

Based on the same platform as Porsche's popular Boxster roadster, the Porsche Cayman is a mid-engined vehicle, meaning that the engine resides behind the passenger compartment but ahead of the rear axle. But even though they share a platform, the Boxster and the Cayman are completely different vehicles.
The obvious difference is that the Boxster is a convertible (or cabriolet for the purists) while the Cayman is a two-door, hard-top coupe. But there are styling and engineering differences as well that make each vehicle distinctive.
Styling-wise, the Cayman borrows a number of design cues, including its nose, roofline, and side air intakes, from some of the 911 models. But it presents those elements in an overall fresh design that fits in well with Porsche's lineup of sports cars.
In 2006, its first year in production, the Cayman was available in a single S version that was powered by a 3.4-liter, horizontally opposed six-cylinder engine that generated 295 horsepower. In 2007, a base Cayman model was introduced. It was equipped with a 2.7-liter six-cylinder engine that produced 245 horsepower.
As far as exterior styling and standard features were concerned, the base Cayman and the Cayman S were very similar. But the base model, with its less powerful engine, lacked some of the mechanical upgrades of its more powerful sibling, resulting in a lighter vehicle.
The list of standard features for the Cayman was extensive, and included air conditioning, power windows, power door locks, leather seats, dual front and side airbags, cruise control, a trip computer, a leather-wrapped steering wheel and shift knob, power exterior mirrors, and an AM/FM stereo system with a CD player.
Other features included traction control, stability control, four-wheel anti-lock brakes, and 18-inch alloy wheels with performance tires.
Drivers favorably compared the Cayman to other high-end exotic sports cars, including models from Ferrari and Aston Martin. They cited its superior handling, acceleration, interior and exterior styling, and transmission as among its positive points.