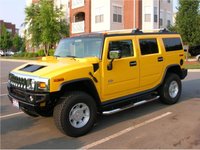 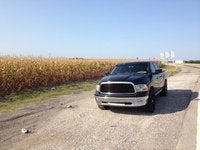 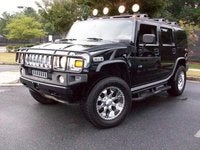 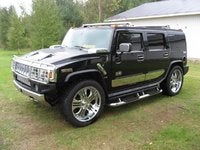 What Is The Average Gas Mileage Of A 2003 Hummer 2

H2 Saying Its Overheating But Its Really Not

I Have A 2005 Hummer H2 That Keeps Indicating On The Dash Hot Engine Coolant And Engine Over Heated Also The Temp Gauge Goes Crazy Back And Forth From Normal To Overheated Pretty Fast. But The Crazy ...

Since The Hummers Are No Longer Beening Made, Are The Parts To Fix Them Har...

How Do I Execute A Sales Contract?

how do i execute a sales contract? i have a buyer for my vehicle who is having a difficult time executing the sales contract and/or paper work through cargurus. please advise. thanks.

How To Tell If Lien Is Released

Making a splash in the new "Transformers" movie, the Hummer H2 is a more street-friendly version of the militaristic and bombastic H1. This means it is slightly smaller, but only slightly. It debuted in 2003 as the first new Hummer nameplate since GM acquired the brand. It is available as both a regular four-door SUV and as a sort of pickup SUT with a tiny open cargo bed.

There's a lot for other drivers to hate about the H2, not the least of which is the in-your-face exterior lightbar and view-obstructing high ride height. There is also its qualification for tax deduction status, its poor fuel economy, and its exemption from fuel economy standards due to its size and weight. Those who don't own one view them as ostentatious status symbols, but they are also one of the best all-terrain AWD vehicles on the road. If H2 owners actually used the SUV off-road, they would find it capable of handling obstacles, steep grades, and deep water as easily as paved asphalt. Towing capacity approaches 7000 pounds. The H2 won the North American Truck of the Year.

The Hummer H2 is also noted for its refined interior features, such as heated leather seats, power seats, dual-zone climate control, and wheel-mounted audio an cruise controls. Most of its life, it got its power from a 6.0 Vortec V8. For 2008, the H2 gets revamped with a new 6.2, 393-hp V8, an updated interior, stronger towing capacity, a standard third row of seats(previously optional), and improved safety features, such as stability control. Though fuel economy remains its biggest drawback, owners say they do feel safe in the H2, thanks to its wide stance and AWD features. Since its intro in 2003, sales of the H2 have consistently gone down.