Looking for a New Nissan Titan in your area?

The Nissan Titan was significantly refreshed for the 2020 model year and carries all its goodies over to 2021. That includes the most standard power, technology, and safety features in its class. 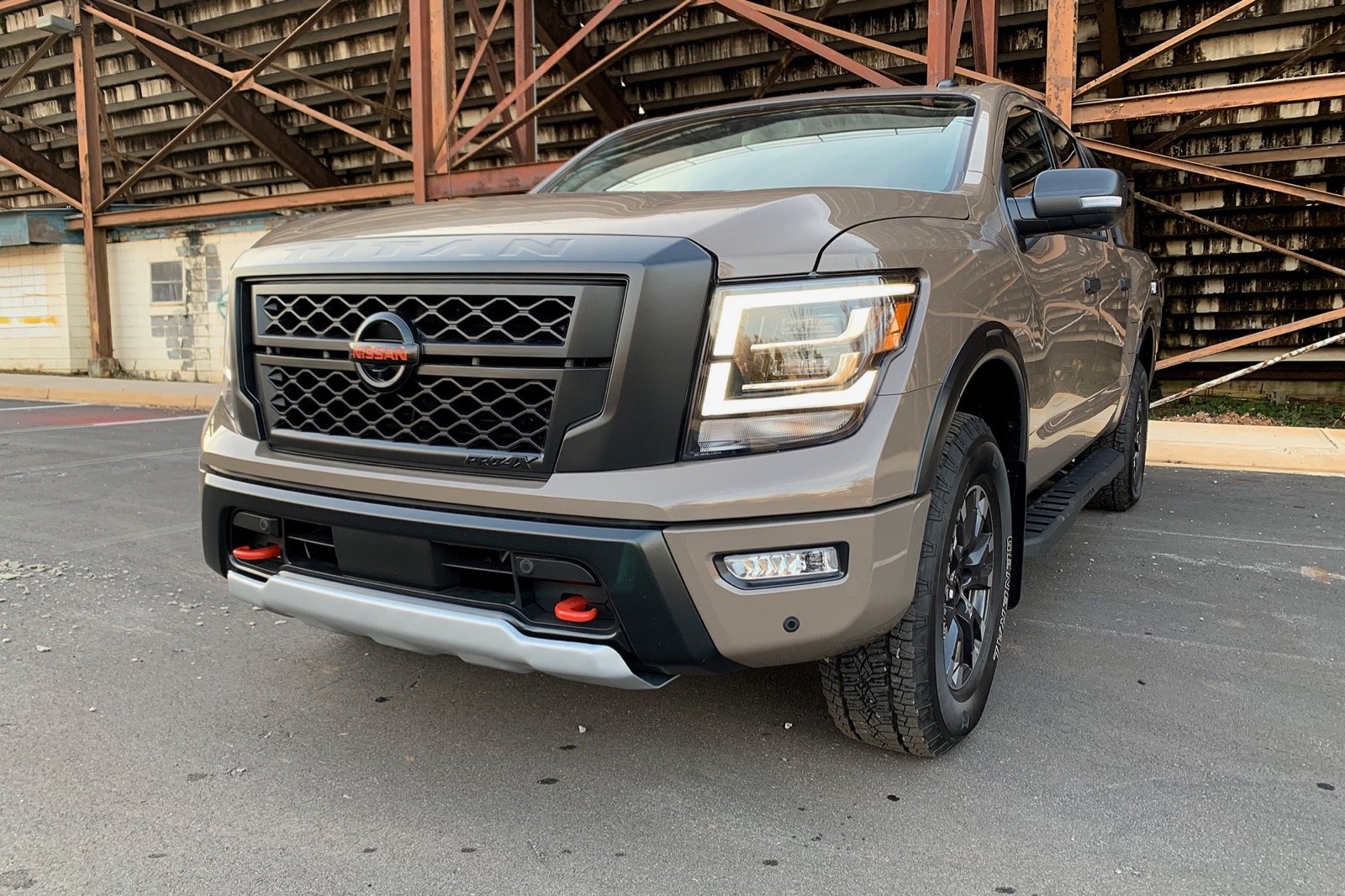 The full-size pickup truck market is extremely competitive. There are brand loyalists left and right who will swear up and down that they won’t buy a Nissan truck. But there’s plenty of reason to give the Titan a test drive. 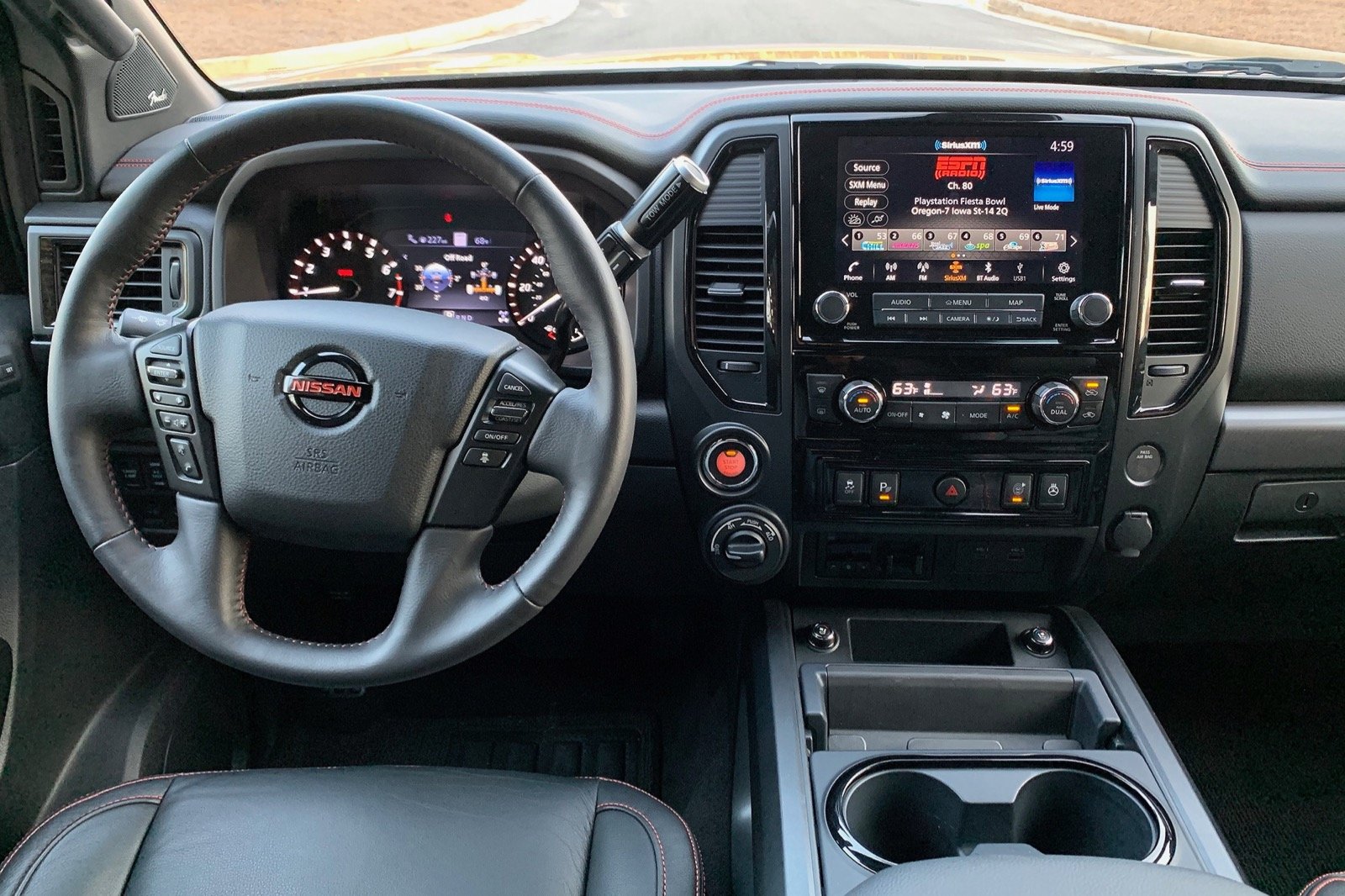 The 2021 Nissan Titan keeps all of its looks from the 2020 refresh. The Titan in offered in three King Cab grades and five Crew Cab trim levels. Each of the Titan’s five grades (S, SL, SV, Pro-4X, and Platinum Reserve) have their own interior and exterior design identity. Nissan has given the base model Titan S and next-higher Titan SV dark grilles. The Titan SL gets a bright chrome grille while the Titan Platinum Reserve has a satin chrome one. The Titan Pro-4X has a black grille.

Each grille has the old Nissan logo at its center (a new logo is being phased in), while the Pro-4X model gets the logo in black in lava-red script. Below the grille of the Titan Pro-4X there are also lava red tow hooks that add a touch of character to the model.

There are four sources of LED light for the truck’s bed which is a nice switch from older trucks that just have one big flooding light that inevitably streams into someone’s window in the morning or evening as much as it does the bed.

The rear also has LED taillights and unique tailgate finishers. Titan Pro-4X has a black finisher while the Platinum Reserve has a satin chrome one. Other grades have more traditional back end tailgate design.

Titan Crew Cab models have a 5.5-foot bed while the Titan King Cab gets a 6.5-foot bed. In the bed is a Utili-track Bed Channel System that has the most bed rails in its class, which makes strapping equipment and recreational vehicles a breeze. A spray-in bedliner, 100-volt power outlet, and damped tailgate are standard.

The interior of the Titan received an equally large upgrade for the 2021 model year, bringing its center stack into the modern age thanks in no small part to a large infotainment screen and plenty of piano-black plastic trim. The look is attractive, and knobs, dials, and buttons are easily able to be used with gloves on.

The truck’s upholstery and seat design are at least as attractive as what you’ll find in GMC and Chevrolet products and a big step up from what’s in the Toyota Tundra.

The Titan’s steering wheel isn’t as easy to use with gloves on and is easily the most dated aspect of the cabin. Its small-ish buttons and cheap-looking design are a decade older than what you’ll find in nearly every other truck on the market today.

The Nissan Titan XD is a separate truck with different powertrain options and equipment. It is not covered in this review. 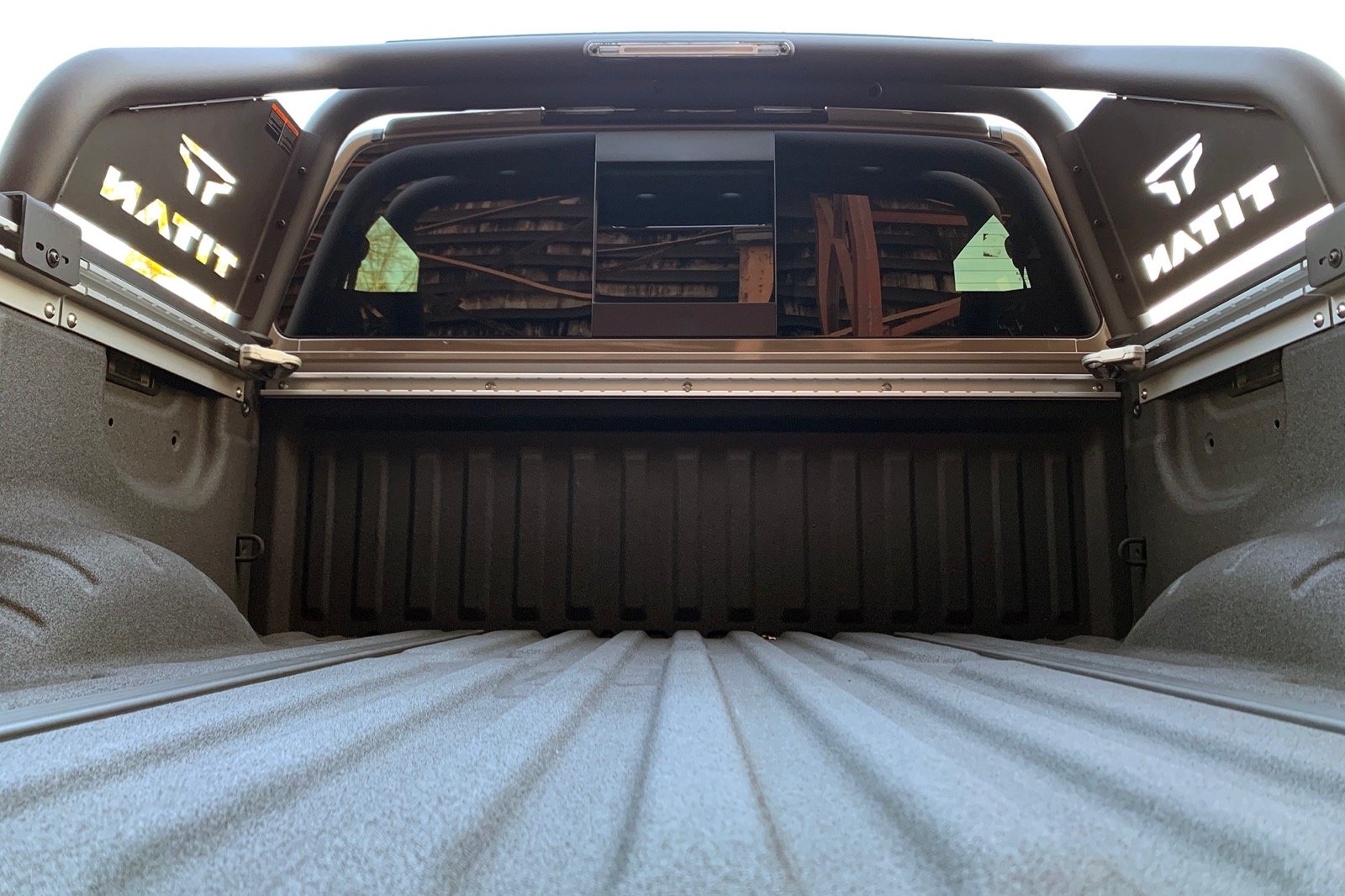 Unlike nearly every other truck on the market today, Nissan sells the Titan with just one powertrain—a 5.6-liter V8 engine. It gets 400 horsepower and 413 pound-feet of torque, making it the best-in-class standard powertrain. Nissan says premium fuel is required to hit those numbers, however.

The engine is paired with a nine-speed automatic transmission that hits well in the low and high gears but struggles mid-range to find the right spot. However, its shifts are smooth and relatively steady. Acceleration is good and strong enough off the line for a truck. This isn’t a GT-R, after all.

There’s no engine start/stop functionality in the Titan, for better or worse. That means it’s not as fuel-efficient as some other trucks, but drivers also don’t have the hassle of listening and feeling a powertrain rattle to life at red lights.

Nissan sells the Titan in the buyer’s choice of rear-wheel drive (RWD) or four-wheel drive (4WD) drivetrain. Both are equally fuel-efficient, getting an EPA-estimated 18 mpg combined. The 4WD model does slightly worse in the city, which is to be expected, getting just 15 mpg as opposed to the two-wheel drive’s 16 mpg in the same situation. Both achieve 21 mpg on the highway.

The Titan has better fuel economy than the Toyota Tundra but less efficient than certain varieties of the Chevrolet Silverado 1500, Ram 1500, GMC Sierra 1500, and Ford F-150.

Nissan’s full-size truck steers nicely but it’s not as smooth to drive as the Ram 1500. Think of it as having more traditional truck steering with plenty of play in the wheel so that you feel like you’re driving a truck and not a sedan. The truck drives smaller than its size when keeping it between the lanes, there’s no doubt that it’s every inch a full-size truck.

The Titan’s ride quality is average for the class. It passes along a few bumps in the road but it certainly doesn’t ride like the trucks of yesteryear. The Ram 1500 has better ride quality, but only when equipped with its available air suspension.

RWD versions of the Titan can haul up to 1,600 pounds while 4WD models have a 1,680-pound payload capacity. Properly equipped Titans have a towing capacity of up to 9,310 pounds for RWD models and 9,260 pounds for 4WD trucks. Trailer sway control is standard and keeps the trailer right in line with the Titan when towing. A trailer brake controller is available.

The Titan Pro-4X has unique off-road-centric equipment and technology including hill-descent control and an electronic locking rear differential. This helps the Titan Pro-4X to be especially capable off-road, where it can keep up with most of the rest of the class, except maybe the Ram 1500 TRX and Ford Raptor, which are highly-specialized machines.

Every Titan has an off-road gauge that displays the truck’s tire angle, relative pitch, and roll angles. The tech uses accelerometer data to calculate G-forces rather than relying on a gyroscope like other trucks do. 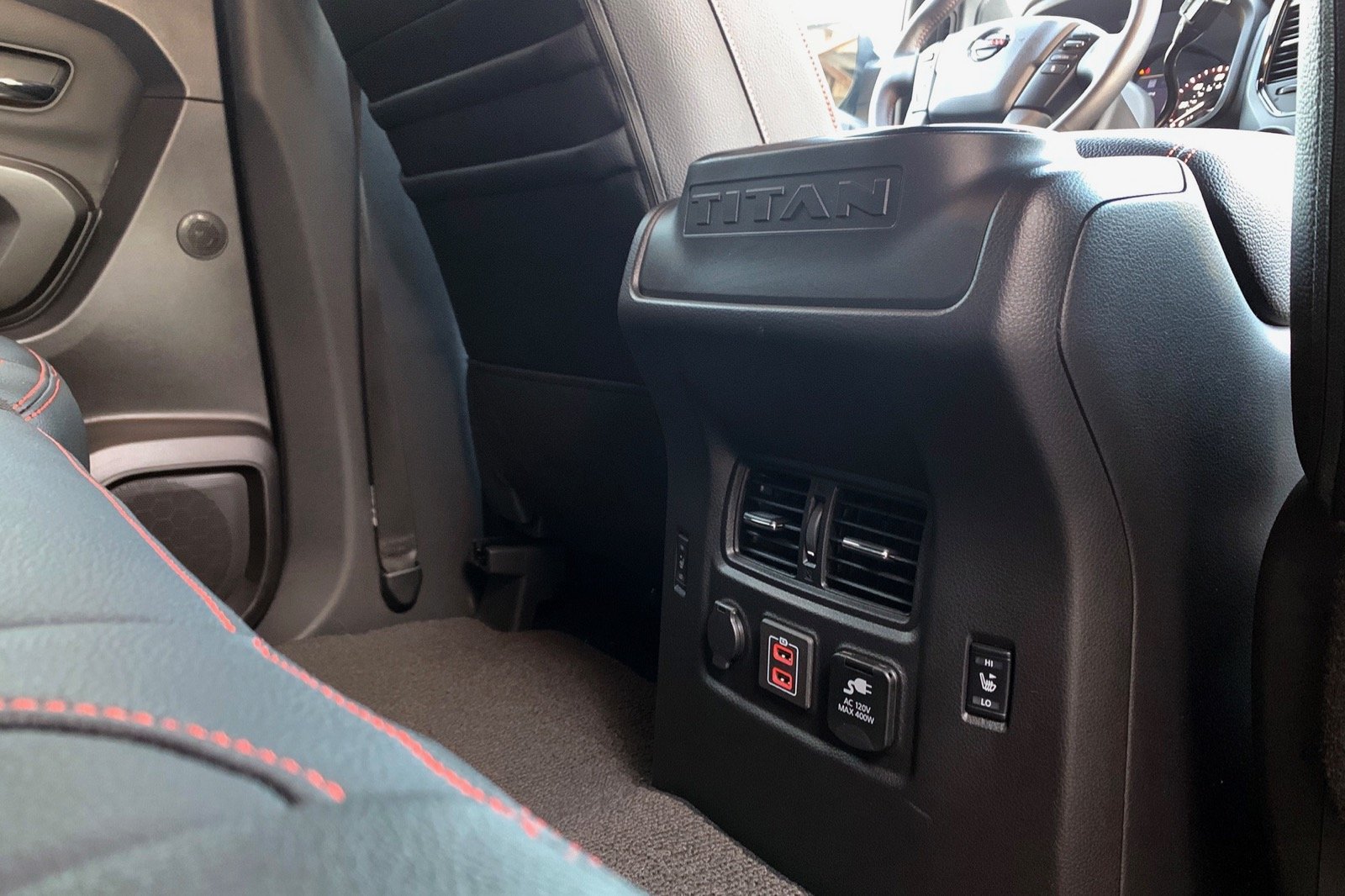 Despite being comfortable, it's not easy for petite adults to find a driver's seat position that allows them to reach the pedals while also having the steering wheel a safe distance from their body. Those closer to five feet tall than six feet will likely find themselves coming up short.

Nissan has given the Titan enough seating space in the front and rear for adults. Though some pickups have more legroom, there’s no reason to think that the Titan is inadequate in that department.

The same is true for storage space in the center console. The Titan’s covered storage space is plenty big enough to stash a handbag or snacks for a road trip. A small hold in the console is specifically designed for smartphones (two will fit) and allow for easy visibility and charging while the vehicle is in motion.

Nissan offers an available panoramic moonroof and power-sliding rear window. Both are delightful additions to the Titan allowing in additional sunlight and making use of the rear window easy.

The Titan also wins points for having easy-to-reach grab handles that make ingress and egress easier. Its folding rear seatbacks and bag hooks under the rear seat cushions are also high points of the interior’s thoughtful layout. 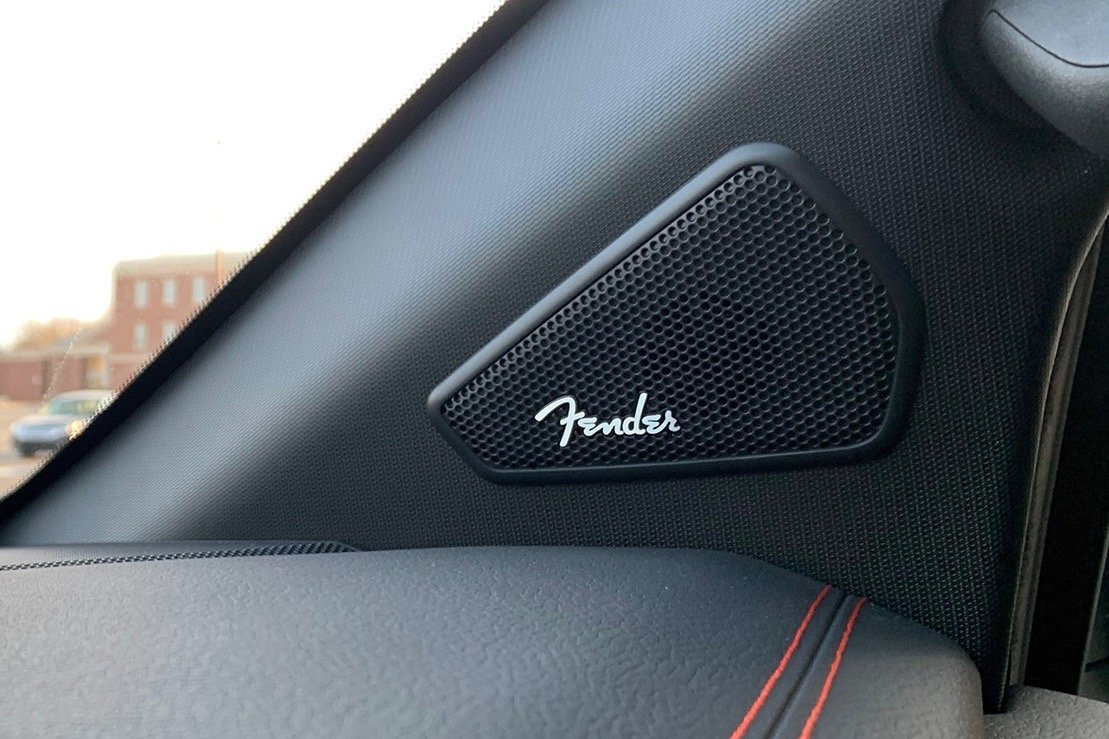 The truck’s WiFi hot spot allows up to seven devices to be simultaneously connected. A subscription to a third-party service is required to utilize the functionality.

While the screen is pleasant to look at, its graphics are not nearly as modern or mature as what you’ll find in other trucks like the F-150 and Ram 1500. The interface is quickly receptive to touch commands.

In front of the driver is a 7-inch programmable information display that is larger than what you’ll find in much of the Titan’s competition.

Trucks equipped with NissanConnect, the system that combines navigation, security, and entertainment, also get Nissan Concierge. The service acts as a true concierge service giving owners access to live assistants 24 hours a day just by pressing a button inside their vehicle, or by contacting Nissan Concierge via email, text, the NissanConnect Services app, a smartwatch, Amazon Alexa, or Google Assistant. 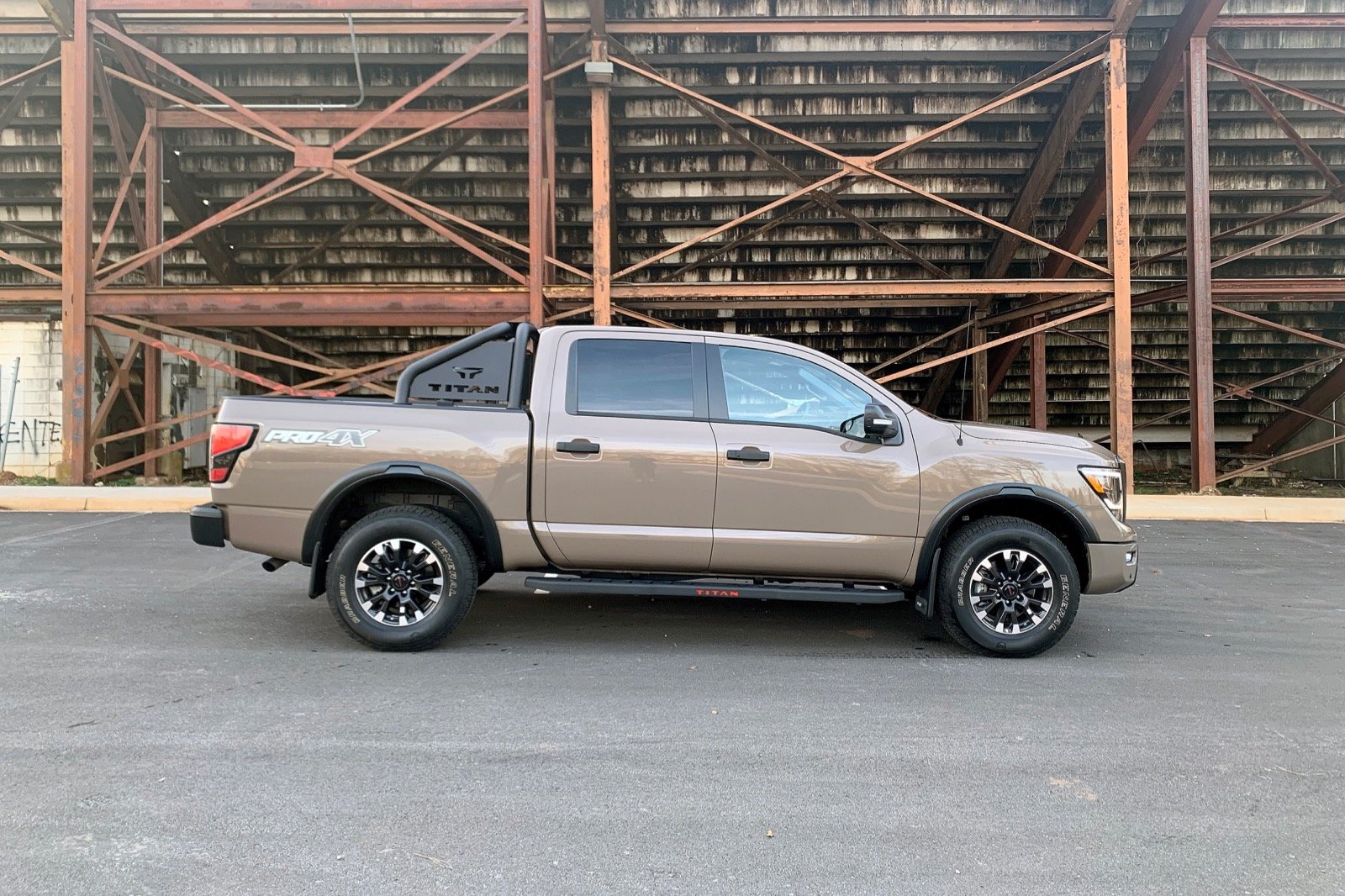 Additionally, the Titan has forward-collision warning and parking sensors and is available with an Around View Monitor camera system, adaptive cruise control, driver-alertness monitor, traffic-sign recognition, and rear door alert.

Nissan backs each Titan with a five-year/100,000-mile bumper-to-bumper warranty. That’s the best truck warranty in America. The warranty features basic and powertrain coverage. 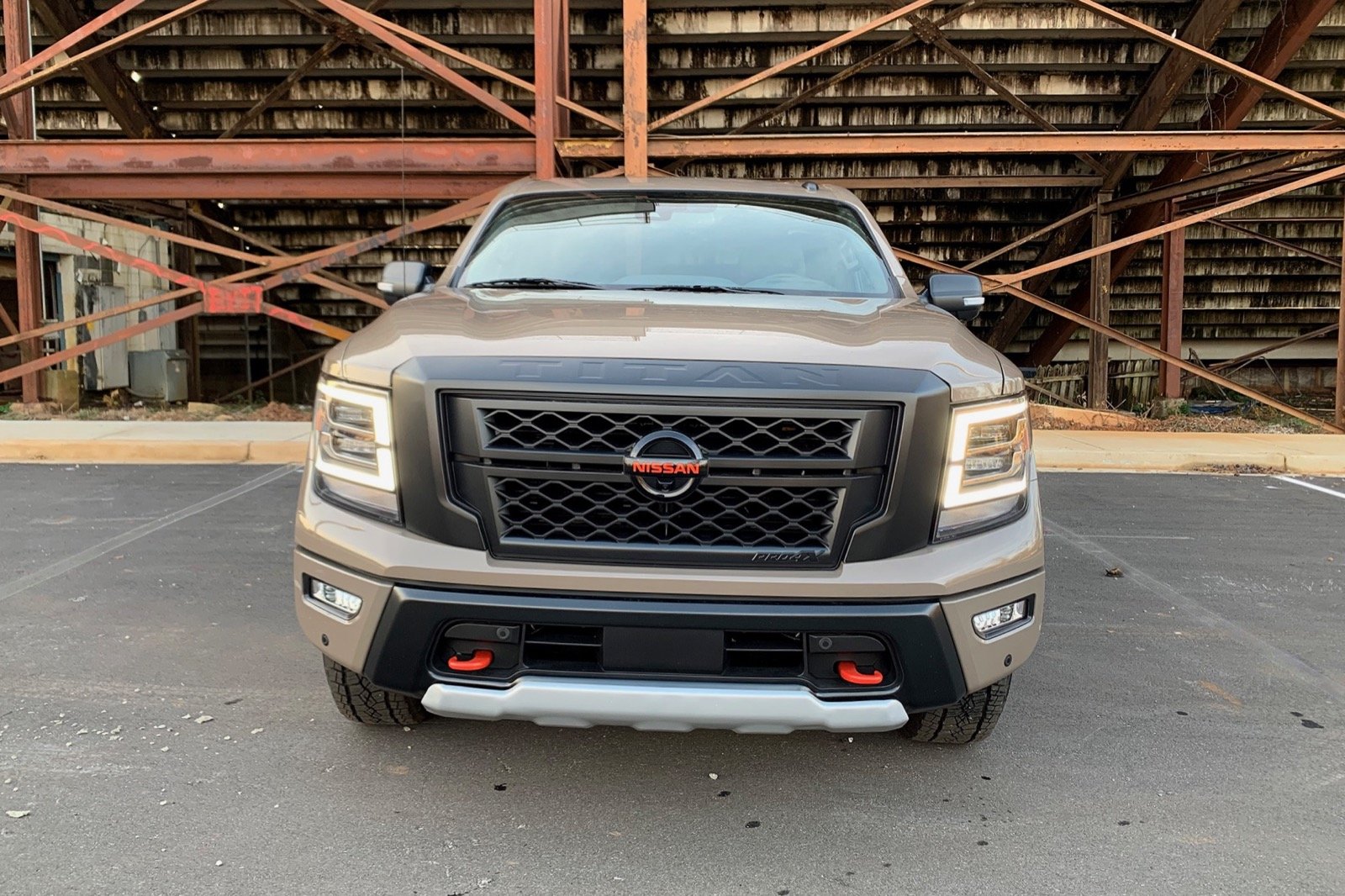 The Nissan Titan has a starting MSRP of $39,280. That’s about as much as a three-row SUV. Pricing maxes out around $60,000, which is far lower than the cost of many other full-size pickup trucks, though, to be fair, those trucks offer far more features and equipment.

A long list of packages, factory installed options, and port installed options are available for buyers. The list allows buyers to be choosier rather than shelling out big bucks for a package of available equipment despite only wanting one or two things that are a part of it.

The Titan isn’t for everyone. It’s not a towing or hauling champ, nor is it the most fuel-efficient truck out there. The Ram 1500 has a far better interior and the Ford F-150 offers substantially more driver-assist technology.

That being said, the Titan is a great truck. If you’re more into daily driving a truck than using it at a worksite or luxuriating in it on the road, you’ll be hard pressed find a reason to say no to the Titan unless you’re strictly in the camp of the Blue Oval or Bowtie.

Have you driven a 2021 Nissan Titan?
Rank This Car

Enter your zip to see incentives for a new Titan in your area.

I Want To Lease And Want To Know If I Can Do It Through This Site?

can i lease through cargurus

The Cargurus Price Is Not Correct.

The pricing for Cargurus is not accurate. Will your company honor the actual price?