Looking for a New Mercedes-Benz S-Class in your area?

Mercedes gives its flagship an overhaul. 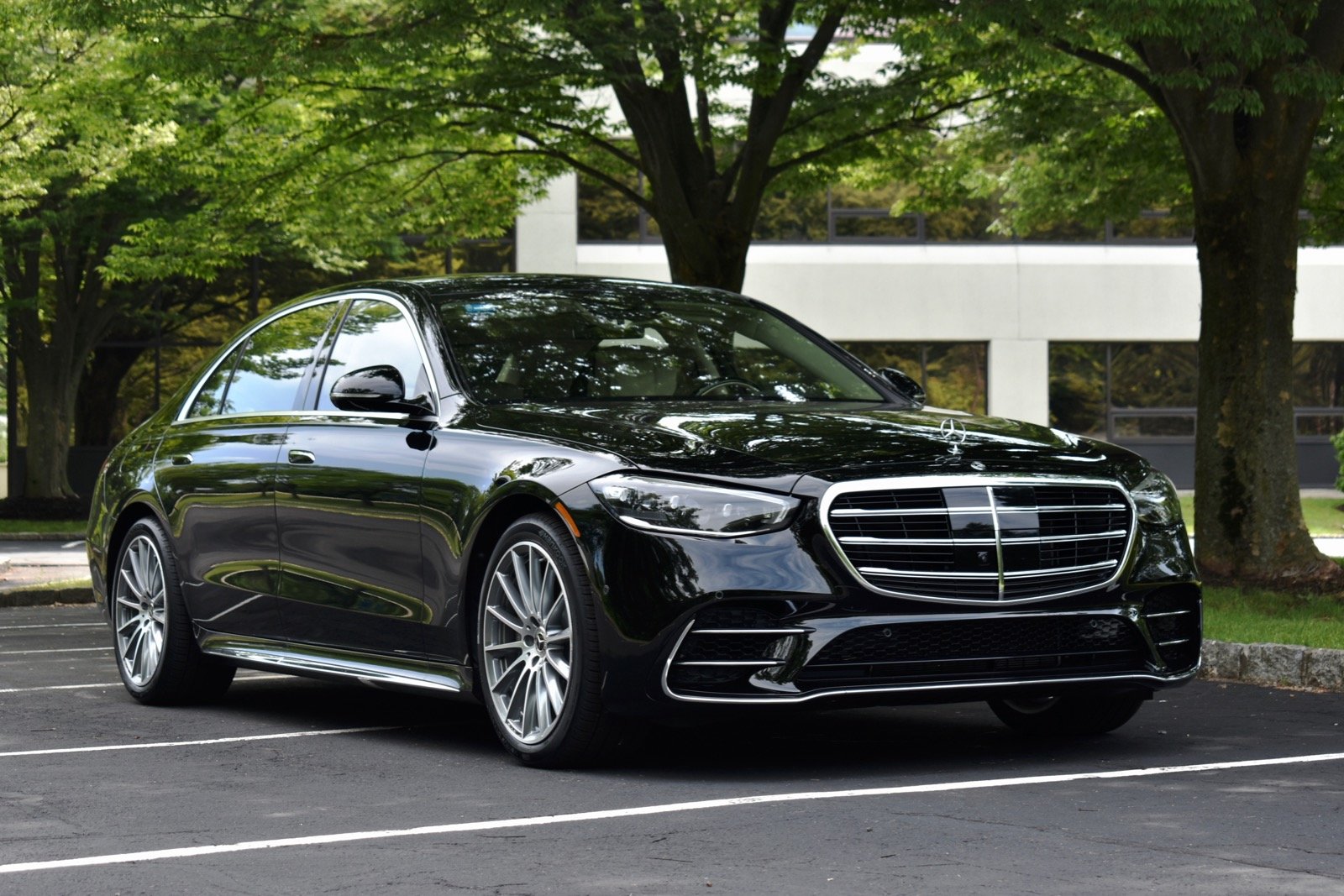 The S-Class not only sits at the top of the Mercedes hierarchy in price and prestige, but it has also long served as a technological showcase. In the press release for the redesigned 2021 S-Class, Mercedes repeatedly noted the innovations—from anti-lock brakes to airbags—that were introduced on the big sedan and eventually trickled down to mainstream vehicles.

With the previous generation dating back to the 2014 model year (with a significant update for 2018), the Mercedes-Benz S-Class was in need of an update to maintain that status, and to keep pace with other full-size luxury sedans like the Audi A8, BMW 7 Series, and Lexus LS. To do that, the new S-Class gets a more sophisticated infotainment system, new powertrains, and more aerodynamic bodywork, among other features.

The 2021 S-Class launches in two configurations, both with 4Matic all-wheel drive (AWD) and EQ Boost mild-hybrid systems. The S500 4Matic has a six-cylinder engine, while the S580 4Matic has a V8. We spent a few days with the S580 for this review. A Mercedes-Maybach S680 4Matic version will follow in the first half of 2022, and you can expect a new AMG performance version sometime in the future as well. 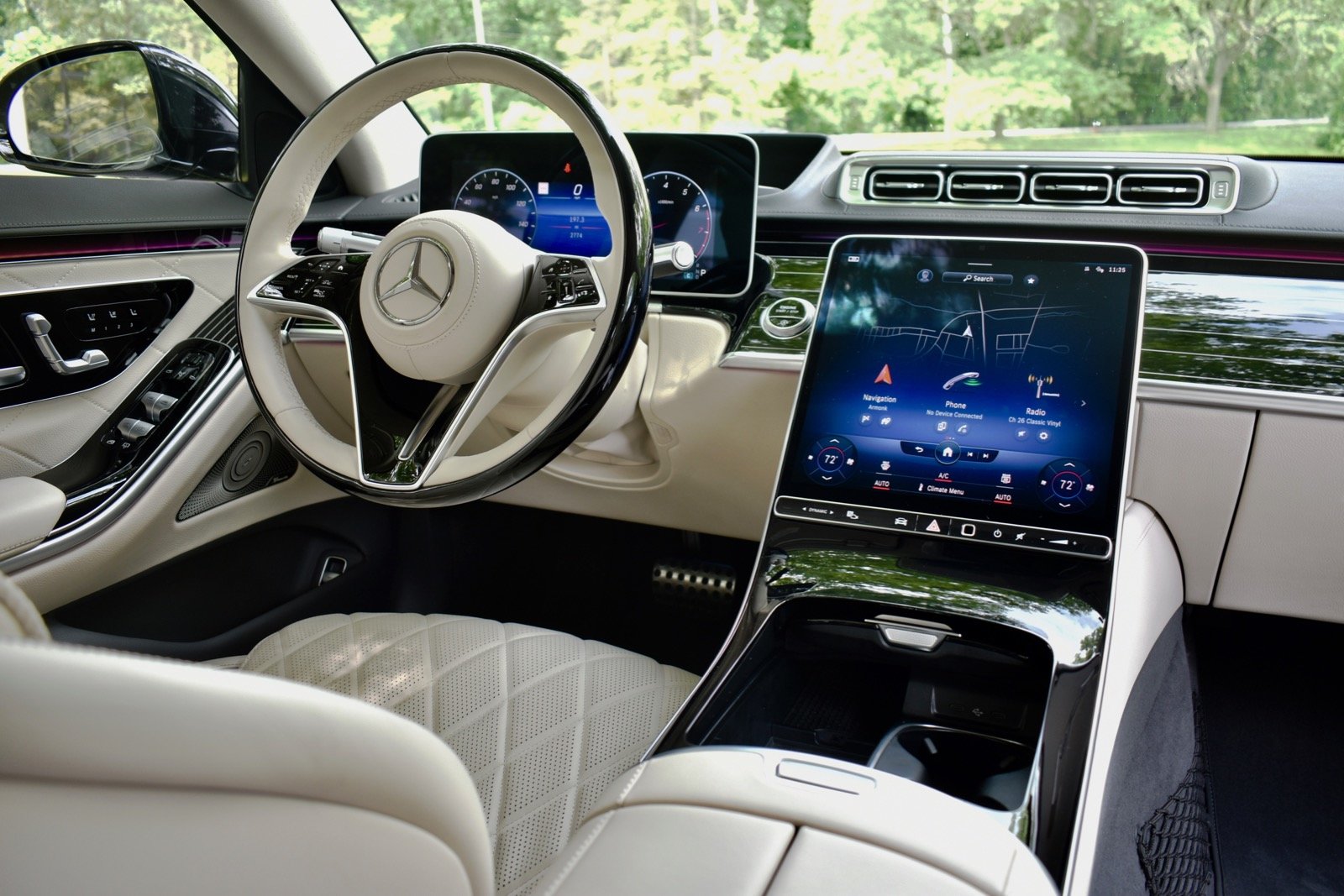 The exterior styling doesn’t look very different from the previous-generation S-Class, but the wind tunnel can tell. Mercedes claims a drag coefficient (Cd) of 0.22, meaning the S-Class generates less drag than a Toyota Prius. The new S-Class is also 1.3 inches longer than its predecessor, with a 2-inch longer wheelbase, and slightly taller and wider as well.

The car’s size makes the biggest impression, while the classic Mercedes hood ornament and grille (with a large plastic panel covering sensors) add a hint of ostentation. The S-Class comes standard with 19-inch wheels, while 20-inch and 21-inch wheels are optional. Our test car’s 20-inch wheels (part of the AMG Line package) filled out the wheel wells nicely, so we’re not sure that upgrading to the 21s is strictly necessary.

The interior seemed like it was designed around the infotainment touchscreen and digital instrument cluster. Those two items protrude from the dashboard and are the first things you notice. Mercedes also decluttered the rest of the interior, eliminating its usual infotainment rotary controller and swapping the round air vents seen in other models for rectangular ones, which take up less space. It’s about as minimalist as a Mercedes cabin will likely ever get.

Many cars have interior ambient lighting, but Mercedes took this feature to another level. Lighting elements run through the interior like neon signs on a city street. Mercedes says there are about 250 LED elements, compared to around 40 previously. You can also choose between 64 colors, and the ambient lighting system is connected to infotainment and driver-assist functions.

Interior materials are largely what you’d expect from a six-figure luxury car, including Nappa leather upholstery, open-pore wood trim (aluminum inlays), and cool-looking speaker grilles for the optional Burmester audio system. A two-panel glass roof means first-row and second-row occupants don’t’ have to argue over sun or shade. However, we weren’t fans of the piano-black trim that covered large swathes of our test car’s dashboard and steering wheel. It became smudged almost immediately, reflected sunlight, and generally seemed beneath the standards of a car like this. 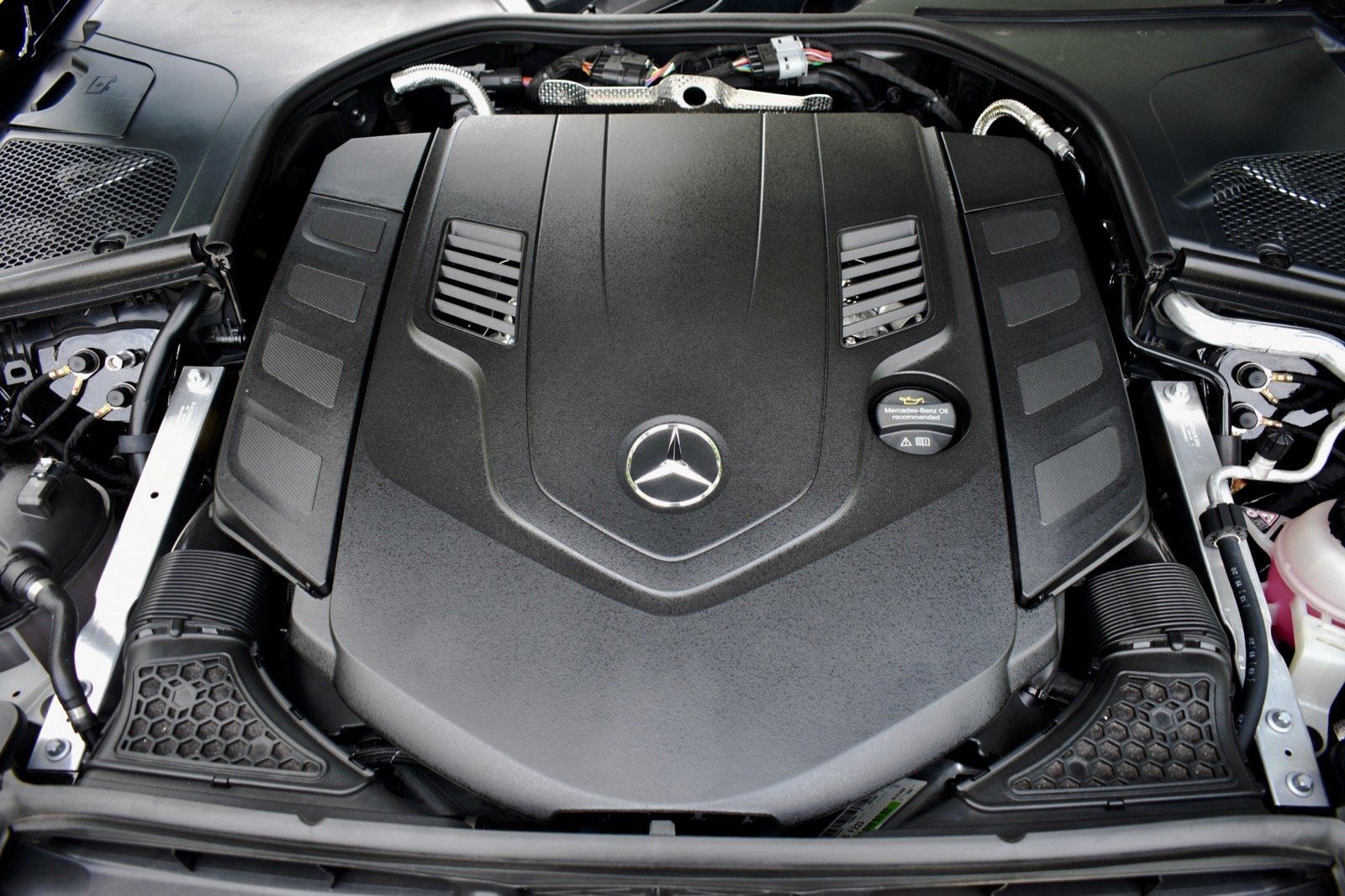 The base 2021 Mercedes-Benz S500 4Matic uses a 3.0-liter turbocharged inline-six engine, which produces 429 horsepower and 384 pound-feet of torque. The S580 4Matic gets a 4.0-liter twin-turbo V8, tuned to produce 496 hp and 516 lb-ft of torque. Both versions use a nine-speed automatic transmission.

Both the S500 and S580 also get EQ Boost, a mild-hybrid system that adds a small amount of electric assist, and enables a more aggressive engine stop/start system and electrical accessory drives for greater efficiency. EQ Boost’s single electric motor can add 21 hp and 184 lb-ft of torque for short bursts.

Mercedes quotes zero to 60 mph times of 4.8 seconds for the S500 and 4.4 seconds for the S580, with top speeds electronically limited to 130 mph. Both times are pretty quick than a big sedan, but some competitors are slightly quicker. Mercedes does have a V12-powered Maybach S680 version on the way, but it’s no quicker than the S580. We’ll have to wait for the inevitable AMG version for that.

The S-Class gets standard air suspension, with a more sophisticated E-Active Body Control suspension system, using 48-volt electrical hardware, available sometime after launch. The 2021 model is also the first S-Class with rear-wheel steering, which can turn those wheels up to 10 degrees at low speeds, reducing the turning circle by seven feet (to 36 feet), according to Mercedes.

Our S580 was fast and comfortable, although we noticed a bit more wind noise than expected at highway speeds. While not exactly a driver’s car, the S-Class also didn’t lose its composure on twisty roads. The Sport and Sport+ driving modes kept body roll in check without compromising ride quality, and we were impressed by the steering. The helm felt very precise and, unlike some competitors, Mercedes didn’t add too much artificial steering weight in the sportier drive modes. 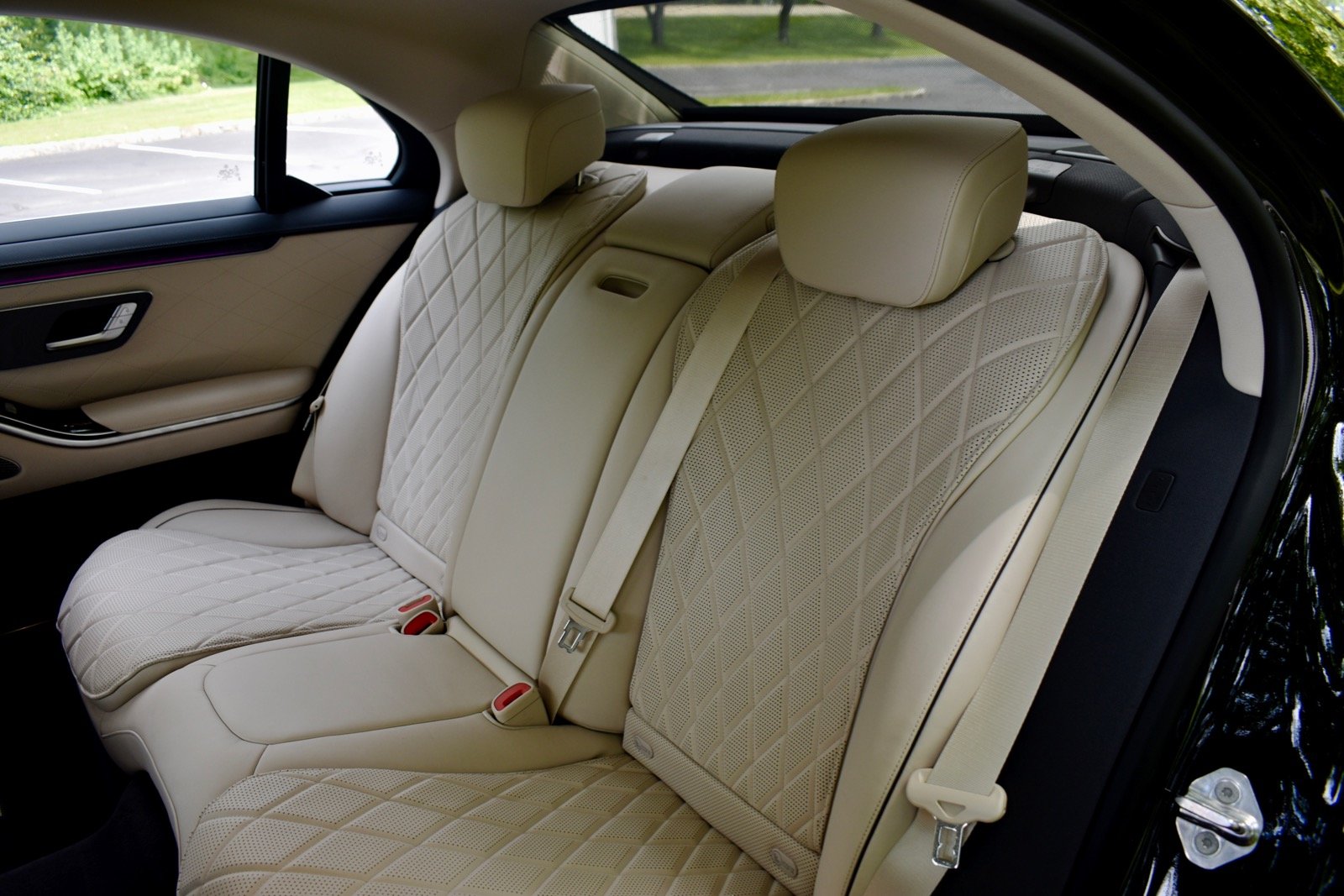 The 2021 S-Class has more front and rear headroom, as well as more rear legroom, than its predecessor. It also has more front headroom than competitors, but the least front legroom. Shoulder room is segment-leading, however, contributing to a greater feeling of spaciousness.

At 12.9 cubic feet, cargo space has increased by 0.7 cubic feet over the previous-generation S-Class. However, it’s still less trunk space than other big luxury sedans. Some of the S-Class’ optional extras, like power-adjustable rear seats, can also eat into cargo space.

Up front, the S-Class gets seats that you’ll want in your living room. The power-adjustable front seats have 19 motors for adjustment, plus heating, ventilation, and massage, the latter with 10 programmable modes. The head restraints even get their own tiny pillows. Perhaps not surprisingly, the front seats were incredibly comfortable, although we’ve never gotten used to Mercedes’ automated side bolsters, which open and close depending on cornering forces.

Mercedes’ removal of many analog controls helped free up some storage space. The center console now features a large storage bin, as well as a covered area that conceals a wireless phone charger and a pair of cupholders. You can also stash small items on a shelf behind the touchscreen, although it seems they’ll be easily forgotten there. Rear-seat passengers get a large console/armrest with its own cupholders, and some climate controls.

With the optional Executive Line package, the S-Class is fit for chauffeur service, thanks to power-adjustable rear seats, four-zone climate control, and an option for a reclining right-rear seat (it’s only available on that side because the front passenger seat needs to move forward to make room). 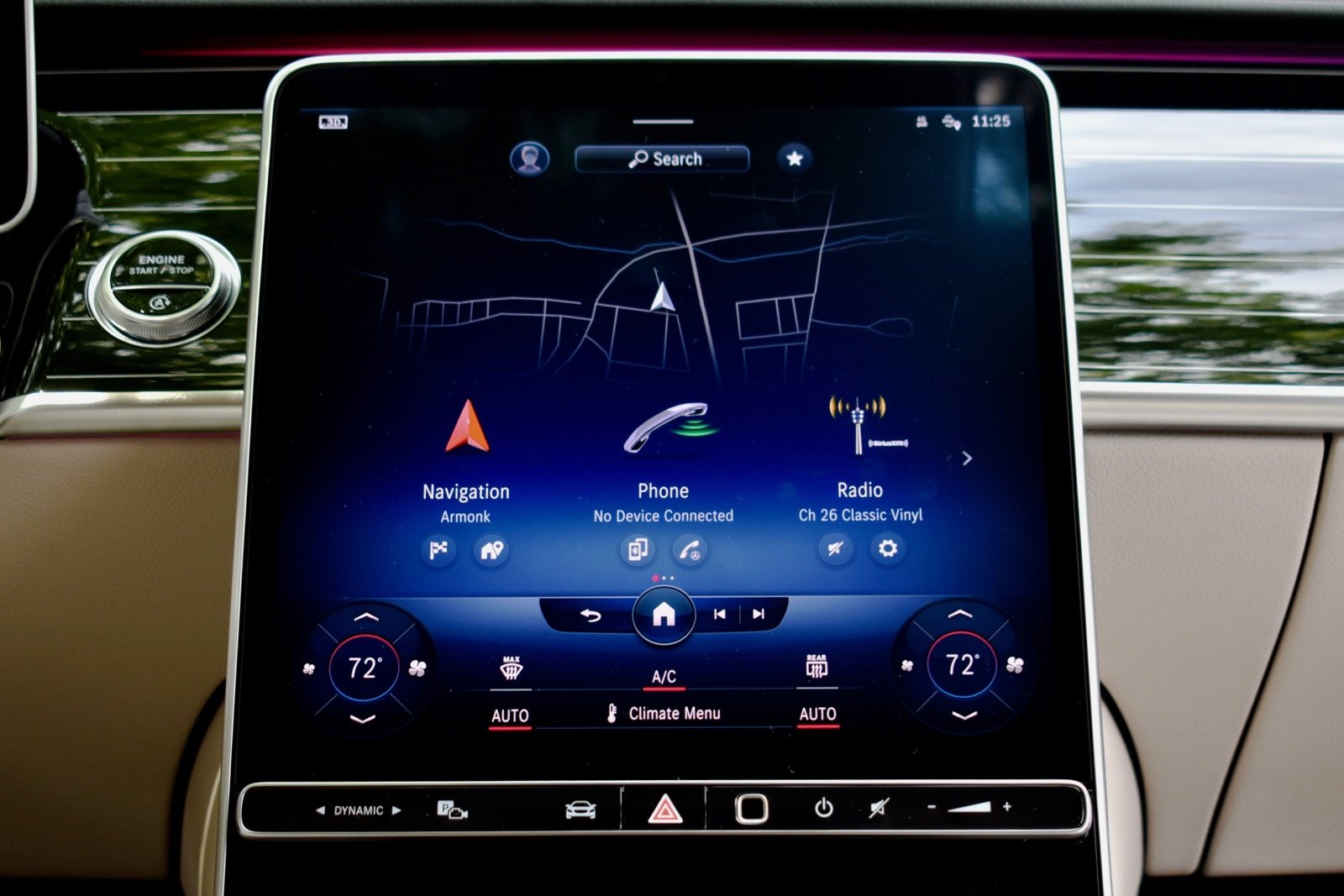 Powering all of this is an updated version of the Mercedes-Benz User Experience (MBUX) infotainment system used in the automaker’s other models. Computing power has been increased by 50% over the previous-generation S-Class, Mercedes said. The system is also more reliant on the touchscreen than before.

Functions like climate control and seat massagers have moved to the monolith-like screen, but we found the new setup easy to use. Mercedes also kept hard buttons for important functions, like audio volume and drive modes, and we found it easy to rely on the voice-control system (which now works from all seats). The S-Class also gets an augmented-reality head-up display (HUD), which can project arrows to show the driver where to turn when using the navigation system. We found that to be extremely helpful, although the amount of other information shown on the HUD could be distracting at times.

Other tech features weren’t as well executed. The digital instrument cluster had gorgeous graphics, but the steering-wheel touchpads needed to change views seemed too small, and it was hard to determine which one to press at any given time. The ambient lighting reacts to certain functions, flickering to provide driver warnings or when someone uses the voice-control system, but it seemed more like a gimmick than a useful feature.

Mercedes is also trying to advance the infotainment concept beyond a simple contest of screen sizes. The S-Class allows drivers to set up personal profiles that, like a smartphone, can be accessed with biometric or facial recognition. In cars equipped with the 11.6-inch rear touchscreens, rear-seat occupants can send navigation directions to the main screen upfront, which sounds perfect for chauffeur-driven plutocrats. 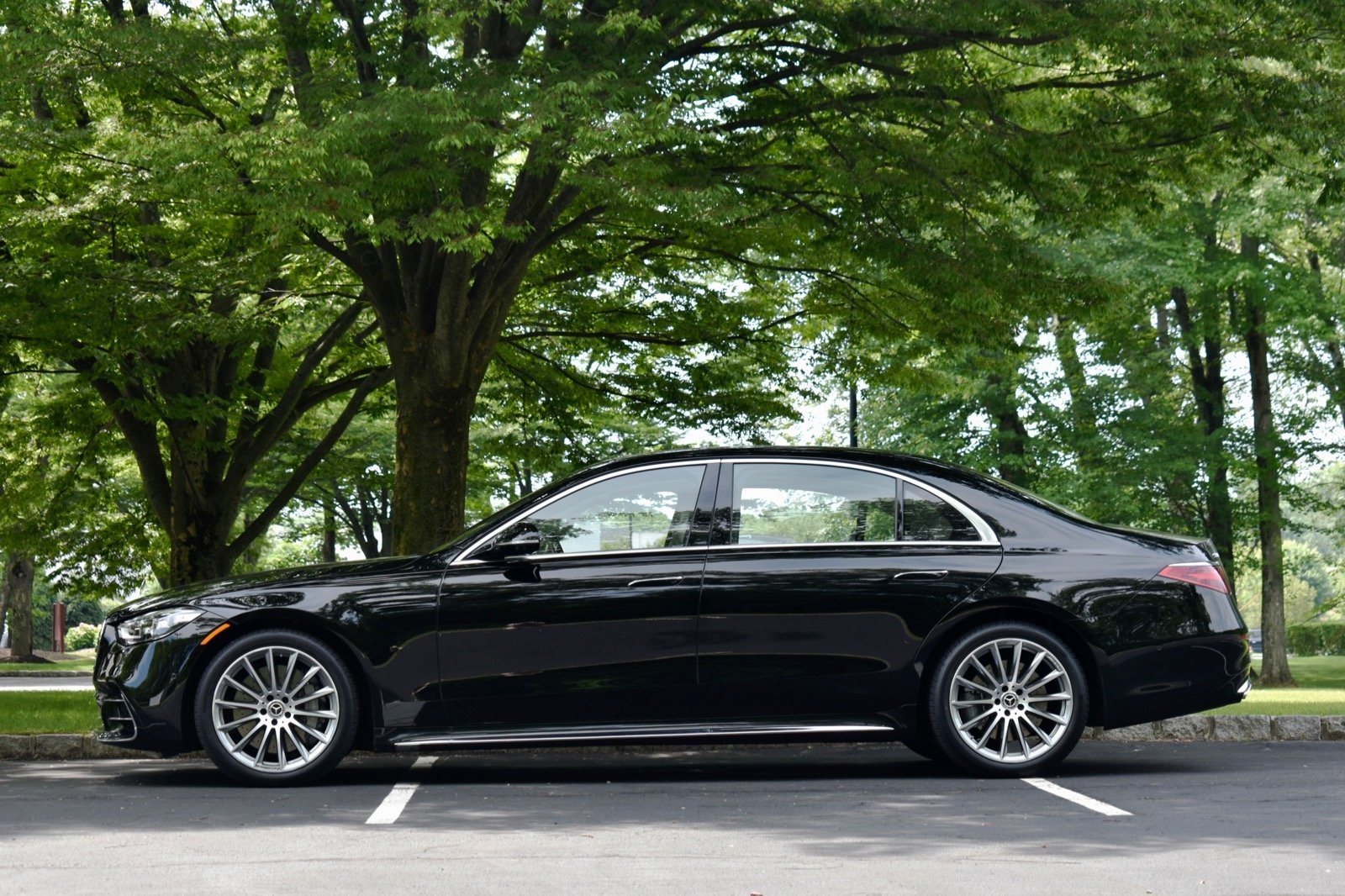 None of these features are groundbreaking, but Mercedes claims improvements in most. For example, traffic-sign recognition can now detect stop signs and red lights, while lane-keep assist can read road edges, and allows the driver to adjust sensitivity. The S-Class also gets a new steering wheel with capacitive sensors, so the car no longer requires steering inputs to tell if the driver is still holding the wheel.

Features like adaptive cruise control and automated lane centering are now mainstream, but Mercedes’ versions performed better than most. Unlike some less-sophisticated systems, the S-Class’ lane-centering could handle highway curves, and the adaptive cruise control reacted quickly and smoothly to changes in traffic ahead. When it comes to driver-assist tech, the difference between automakers is quickly becoming not what features are available, but how well they work. 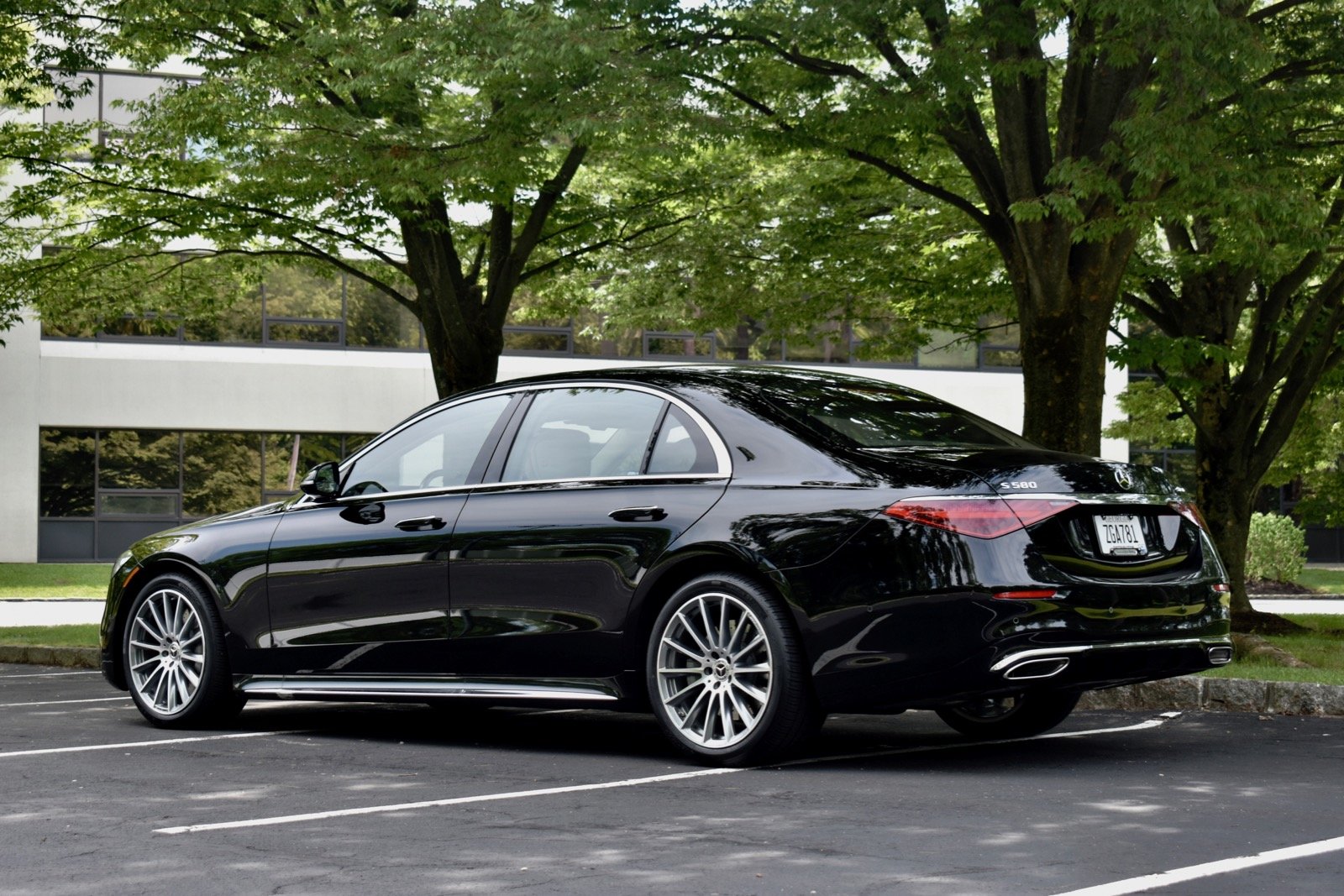 Fuel-economy ratings for the 2021 Mercedes-Benz S-Class aren’t available yet, but we averaged 22.4 mpg over about 300 miles of driving, according to the car’s trip computer. It’s worth noting that Mercedes’ mild-hybrid system offers less electrification than the full-hybrid system available in the Lexus LS, or the plug-in hybrid powertrains available in the Audi A8 and BMW 7 Series. That’s something to keep in mind if saving fuel is your top priority.

If you’re shopping for a car like this, you aren’t on a budget. Still, as with other luxury cars, it’s worth noting that many key features of the S-Class are optional extras, so expect to pay more than the already-high base price for a nicely equipped version.

The Audi A8, BMW 7 Series, and Lexus LS can’t match the S-Class’ array of features, but Audi and BMW offer sportier driving dynamics and more imaginative interior designs. The Lexus LS is the least complicated of the group, which also makes it nicer to live with. The same can be said of the Genesis G90, which is also much cheaper than any of the other big luxury sedans mentioned here. If you want the most features and a prestige badge, though, the S-Class remains hard to beat.

What's your take on the 2021 Mercedes-Benz S-Class?

Harry Sometime last month, I was reading an article on medium and I came across a comment about a group of Hackers (Metronet Credit Solution) who could increase credit score to 750 and above, it caught my attention because I had a very poor credit score, I needed a car for my family and a better house too. But I couldn’t because my credit was in shambles, so contacted them for fix, and they helped me fix my credit. They cleared the negative reports, and increased my score. They did all these in less than 13 days. I never thought this was possible, you can reach out to them via; EMAIL: metronetcreditsolution@gmail.com/ PHONE: 205 518 3032. Thank me later.

Daniel These reviews are wack

Have you driven a 2021 Mercedes-Benz S-Class?
Rank This Car

Enter your zip to see incentives for a new S-Class in your area.