Looking for a New Lincoln Aviator in your area?

A spacious interior, soft ride, and potent powertrains will have you asking, “MKT who?” 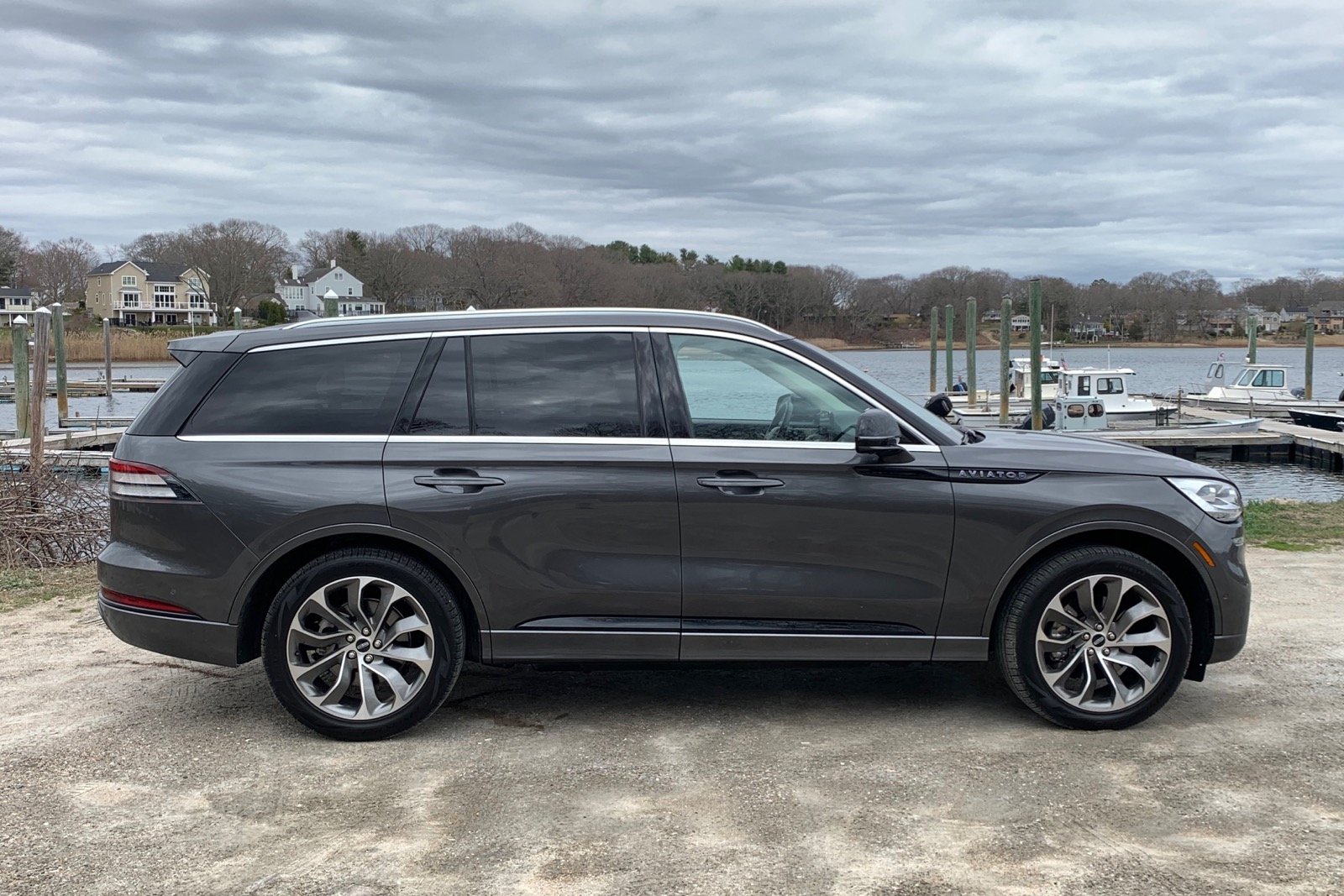 Only a few years ago, Lincoln was in a confusing space. Confusing because many of its cars overlapped with the nicest trims of vehicles from parent company Ford. It was also confusing because of the alphanumeric vehicle names. But Lincoln has ended both of those trends. First, Lincoln has returned to real names for its vehicles, such as the Corsair and Nautilus (Cadillac, are you listening?!).

But what’s in a name? This rebranding would be moot without a compelling product. In this respect, the American luxury brand has delivered, highlighted by the 2021 Lincoln Aviator. This three-row midsize SUV boasts modern technology, potent drivetrain options, and creature comforts that you might sooner find in a high-end German luxury sedan. But this newfound quality comes with a steeper price tag. So is it worth consideration against the likes of the Audi Q7 and RX 350L? Read on to find out. 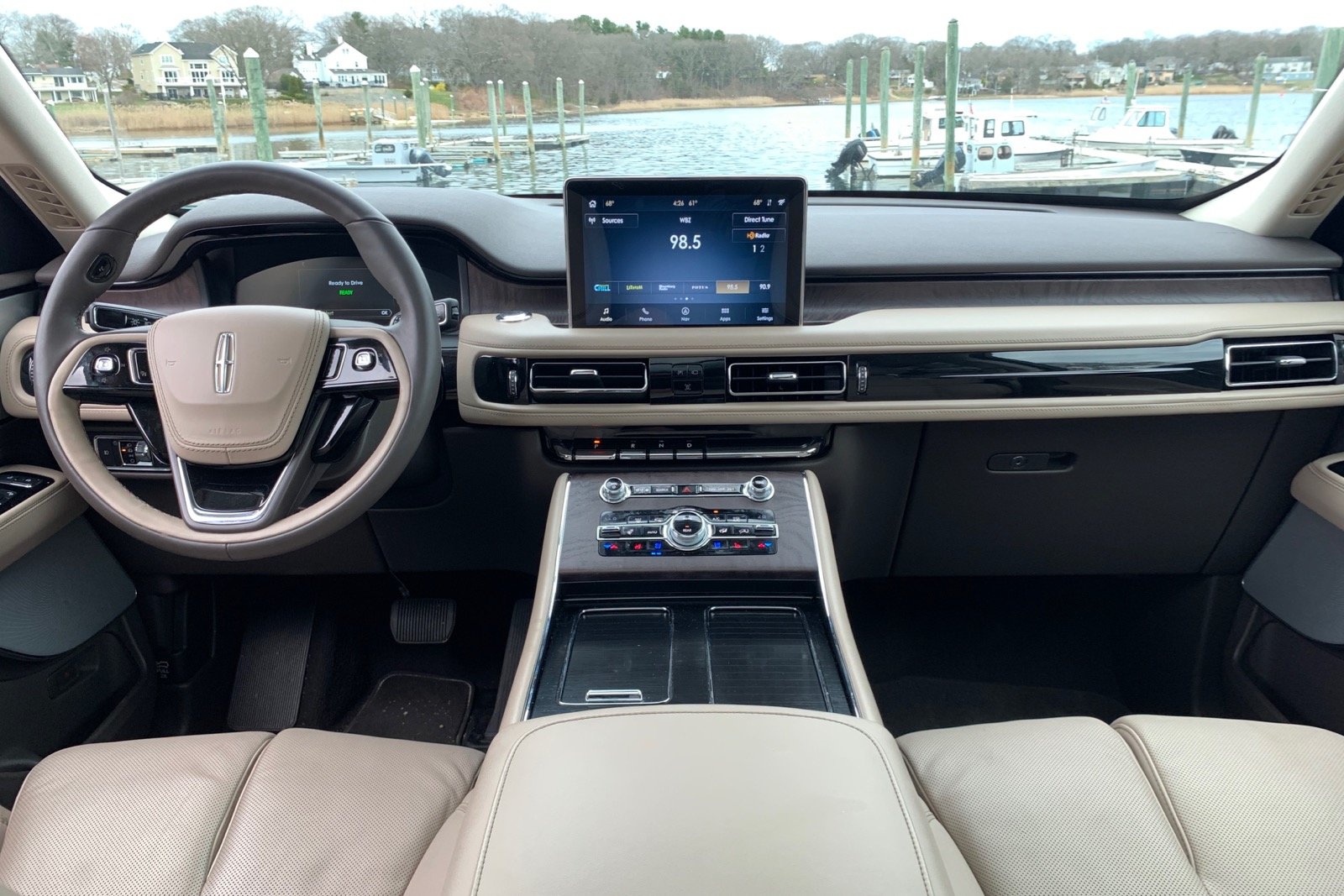 The smartest move Lincoln made when taking on these rivals was avoiding the temptation to emulate their style. Lincoln absolutely nailed the styling of the big-dog Navigator. The company has since emulated that styling throughout the rest of the lineup. The Aviator, which arrived as a 2020 model and carries over to 2021 mostly unchanged, takes on that design language in all the right places. It’s an incredibly sharp-looking car, defined by crisp lines, and it's one of the few modern cars is that actually benefits from heavy use of chrome.

Inside, Lincoln once again differentiated itself from its Ford counterpart. It’s hard to believe at times that the Aviator is actually based on the same platform as the Ford Explorer. Like the exterior, there are crisp lines and chrome accents. But what defines the Aviator’s cabin is comfort and warmth. There are plenty of soft-touch materials and the center console rises elegantly up to the standard 10.1-inch touchscreen that dominates the dash.

Lincoln also differentiates itself with the piano button shifter in the middle of the dash. Typically the button shifter is never as intuitive as a traditional shift lever, but the buttons are laid out in a sensible manner. Rather than your typical alerts when parking or turning on the car, the Aviator has various soothing chimes. It’s a little thing that helps contribute to the air of class and luxury in the Aviator.

Moving to the Reserve trim adds 12-way power-adjustable front seats, upgraded leather upholstery, four-zone climate control, and a hands-free power liftgate. This trim also adds second-row captain's chairs, a panoramic sunroof, and a 12-speaker Revel premium stereo system. This stereo system is terrific, and the unique speakers are an attractive element to the cabin design. Multiple options packages are available on this trim.

We drove the Grand Touring trim. In addition to upgrading to a plug-in hybrid powertrain, the Grand Touring adds adaptive headlights and the Elements Package Plus, which is optional on the Reserve. This package adds a heated steering wheel as well as heated and ventilated front seats. It also came with Lincoln’s impressive Multi-Contour Seats with massaging function. They are surprisingly involved and many of the settings require using the touchscreen. It’s still worth it for massaging front seats.

The rear seat area on our test model includes multiple USB ports, wall-style power outlets, and a digital panel to control the rear heated and cooled seats as well as rear climate audio controls and other rear settings

One up from the Reserve is the Black Label. This trim adds the Convenience and Luxury packages (optional on Grand Touring) as standard equipment. The Convenience Package adds a head-up display and wireless device charging, while the Luxury package upgrades the stereo to a 28-speaker Revel Ultima sound system and the aforementioned heated/ventilated/massaging front seats. Finally, the Grand Touring Black Label adds a Dynamic Handling Package and gains nearly every optional feature as standard equipment. 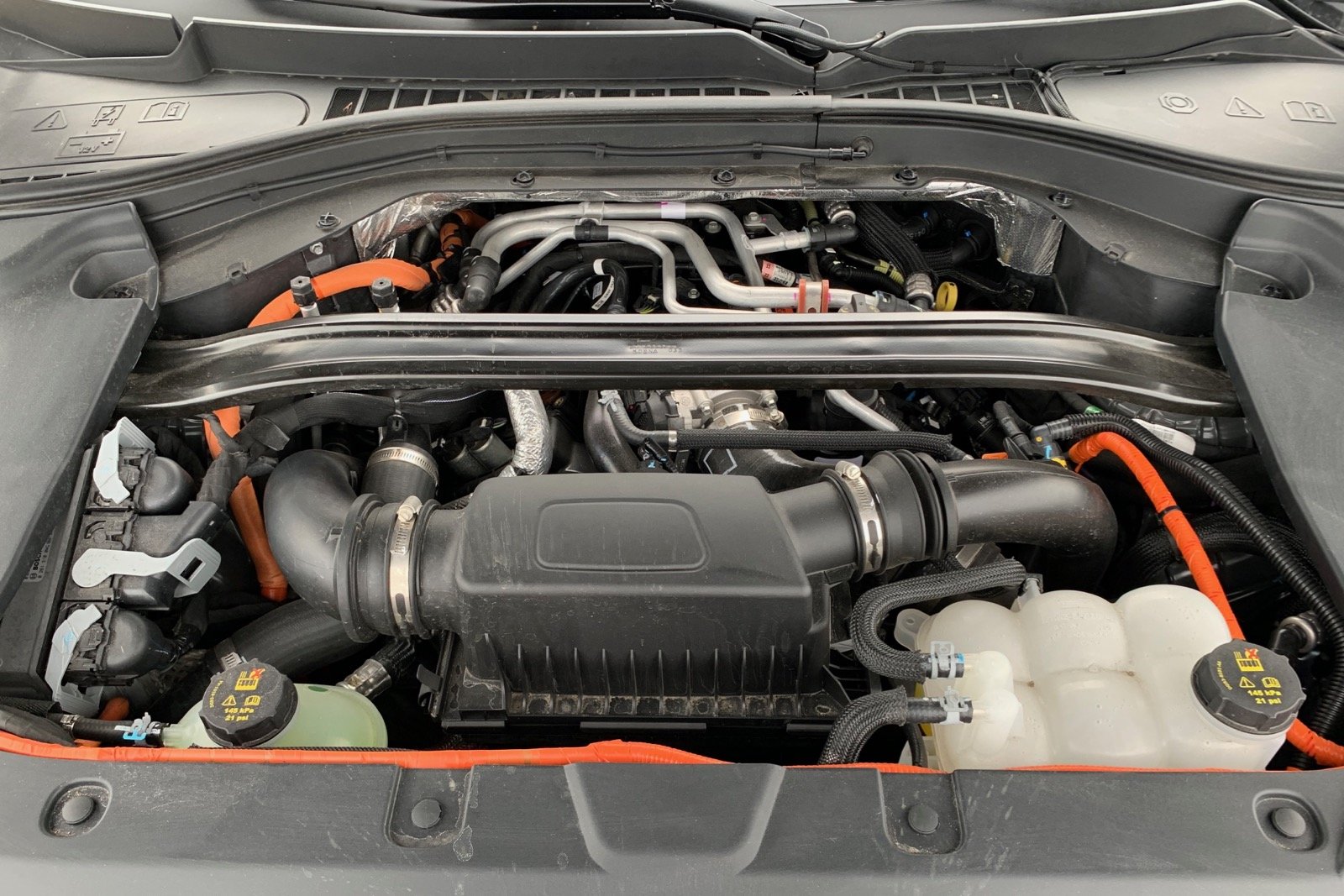 The Grand Touring and Grand Touring Black Label trims feature the same twin-turbo V6, but in a plug-in hybrid configuration. The addition of the electric motor increases output to 494 hp and an immense 630 lb-ft of torque. When fully charged, the plug-in can travel up to 21 miles on pure electric power. The conventional powertrain provides robust acceleration as well, so no need to feel like you’re missing out if you stick to one of the lower trims.

The hybrid powertrain makes for brisk acceleration. It still has a lot of SUV to haul around, and so the result is a smooth-yet-quick swell of power. That heft is also found in corners, where there can be noticeable body roll. The Aviator also has a long wheelbase, making it a bit awkward to maneuver in tight spaces.

The Aviator has a drive mode selector in the center console. Rather than “Sport” and “Eco” drive modes, the mode names include “Excite” and “Conserve.” This seems appropriate, as the Aviator is no performance SUV, but “Excite” certainly does just that. In truth, the Aviator is perfectly suited for highways and cul-de-sacs but struggles to stay composed in city driving. 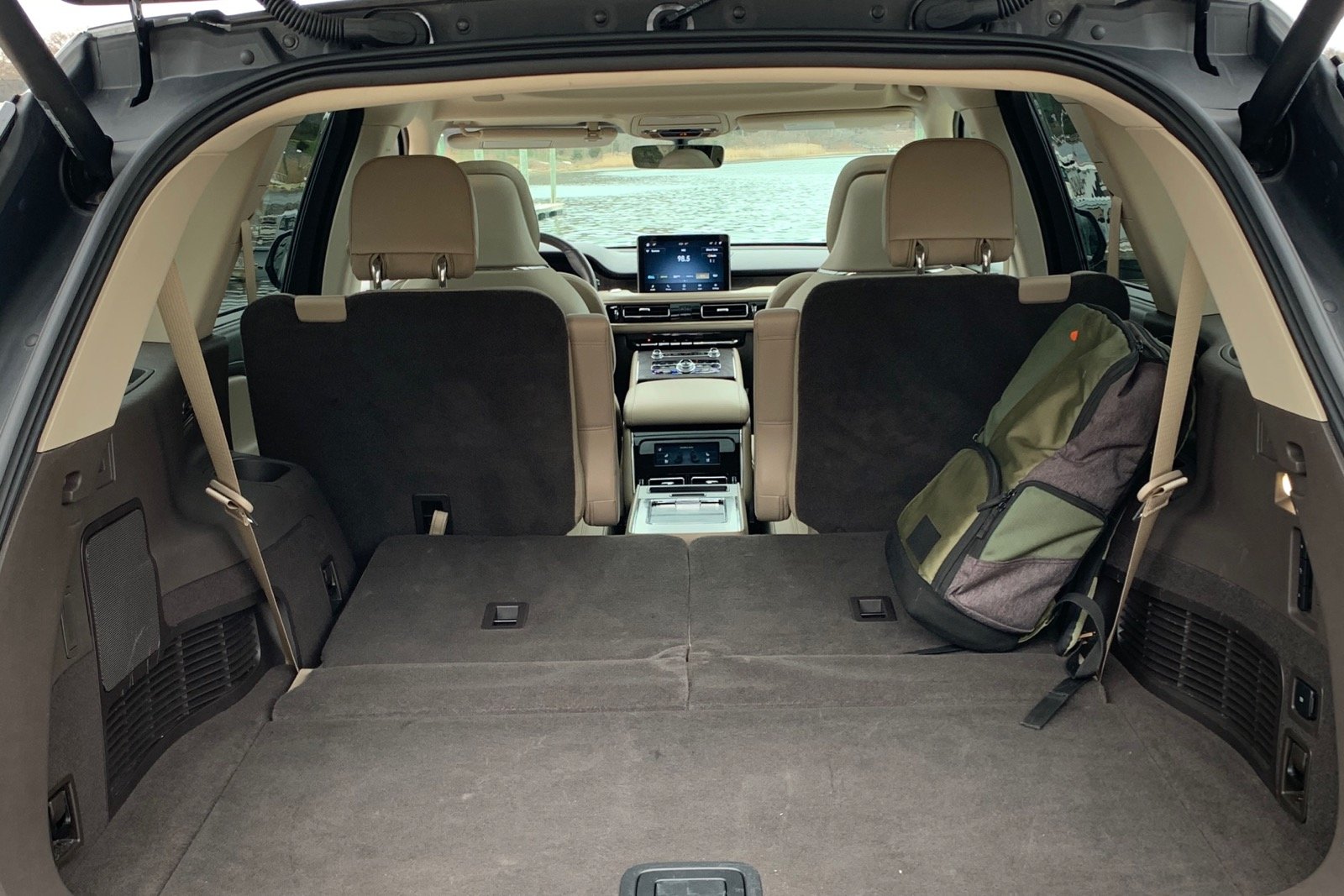 The Aviator provides a solid 18.3 cubic feet of cargo space behind the third-row seats. Our test model featured power-lift-and-lower third-row seats, which fold away to increase cargo capacity to 41.8 cubic feet. With all rear seats folded, the Aviator provides a total of 77.7 cubic feet of cargo space, which is great for the midsize luxury SUV class. A power liftgate is standard and a hands-free power liftgate is available.

The Aviator provides decent third-row space, but the second row is the place to be. This is especially true of our Grand Touring test model, which featured second-row captain's chairs, a helpful center console, and even a digital control panel for the seat, climate, and audio controls. The second-row console even has toggles that operate the visor for the panoramic sunroof.

One potential functional issue is the use of power-button door releases. The outer doors appear to have handles, but there are buttons on the inner side of the handle. Inside, the doors open via a button in the inner door handle. One has to wonder what will happen with those sort of button releases if the battery ever dies. 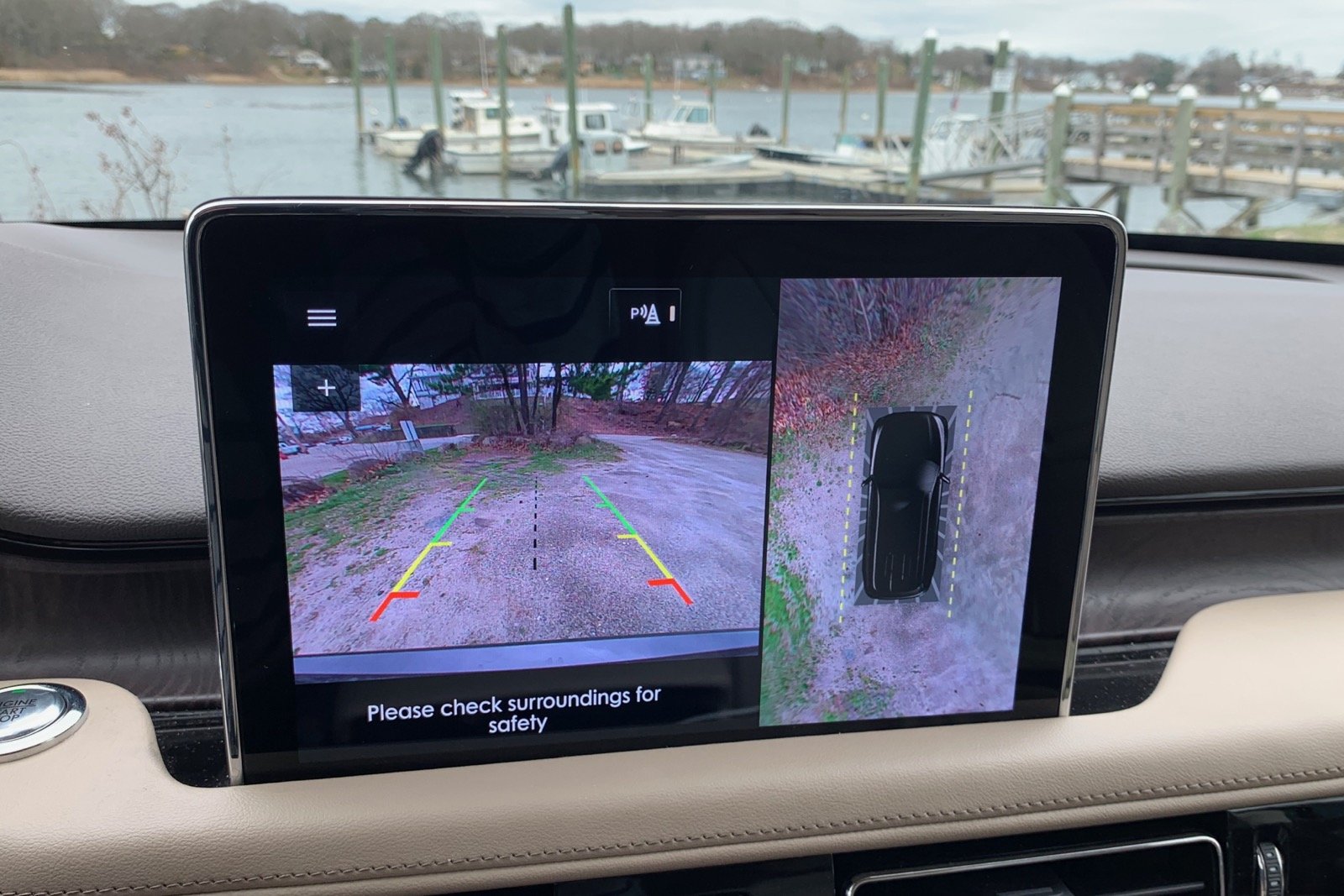 As mentioned, the Aviator comes standard with a 10.1-inch touchscreen that runs the intuitive Sync 3 infotainment system. Once again, Lincoln took a slightly different approach from Ford, and it pays off. The upgraded screen in the Explorer is also a 10.1-inch touchscreen, but a tall layout that protrudes from the dash like the obelisk from “2001: A Space Odyssey.” The Aviator's screen also extends from the dash, but in a landscape format that makes for a more natural layout.

The Sync 3 infotainment system that runs on this screen is easy to use and has a sensible layout for the menus. It also benefits from redundant controls in the center stack below it. The Aviator comes standard with Apple CarPlay and Android Auto. These connectivity programs are presented very well on this screen, taking up the whole screen with large icons. Other automakers treat these popular programs as afterthoughts, resulting in small icons.

The Aviator also comes with an easy-to-toggle fully digital instrument panel, and our test model came with the optional head-up display (HUD). The HUD features large, crisp graphics, and multiple muted colors that make it easy on the eyes. 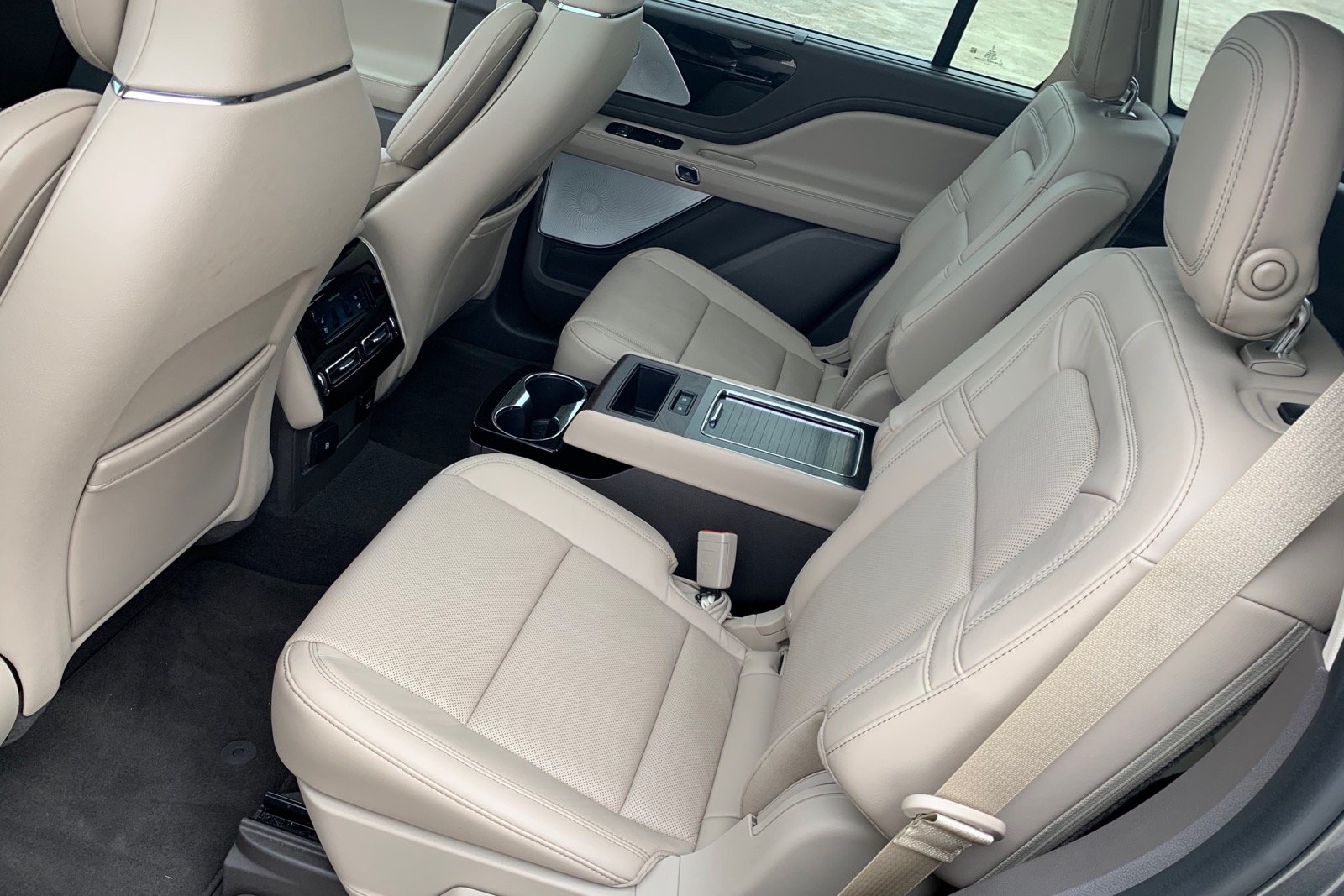 The Aviator comes well-equipped from a safety standpoint. There are a host of standard driver assistance features as part of the standard Lincoln Co-Pilot 360 package. It includes automatic emergency braking, lane departure warning, automatic high beams, blind-spot monitoring, and front-and-rear parking sensors. This is all in addition to standard features like tire pressure monitoring, traction control, and a full complement of front- and side-impact airbags.

Our Grand Touring test model came with the available Co-Pilot 360 Plus package. This includes additional driver assistance features such as reverse automatic braking, self-parking functionality, and adaptive cruise control that can stop and go with traffic. All of these features work seamlessly and were never over-intrusive.

The Aviator earns top marks in evaluation by the National Highway Traffic Safety Administration (NHTSA) and the Insurance Institute for Highway Safety (IIHS). The Aviator also earns a Top Safety Pick accolade from the IIHS. 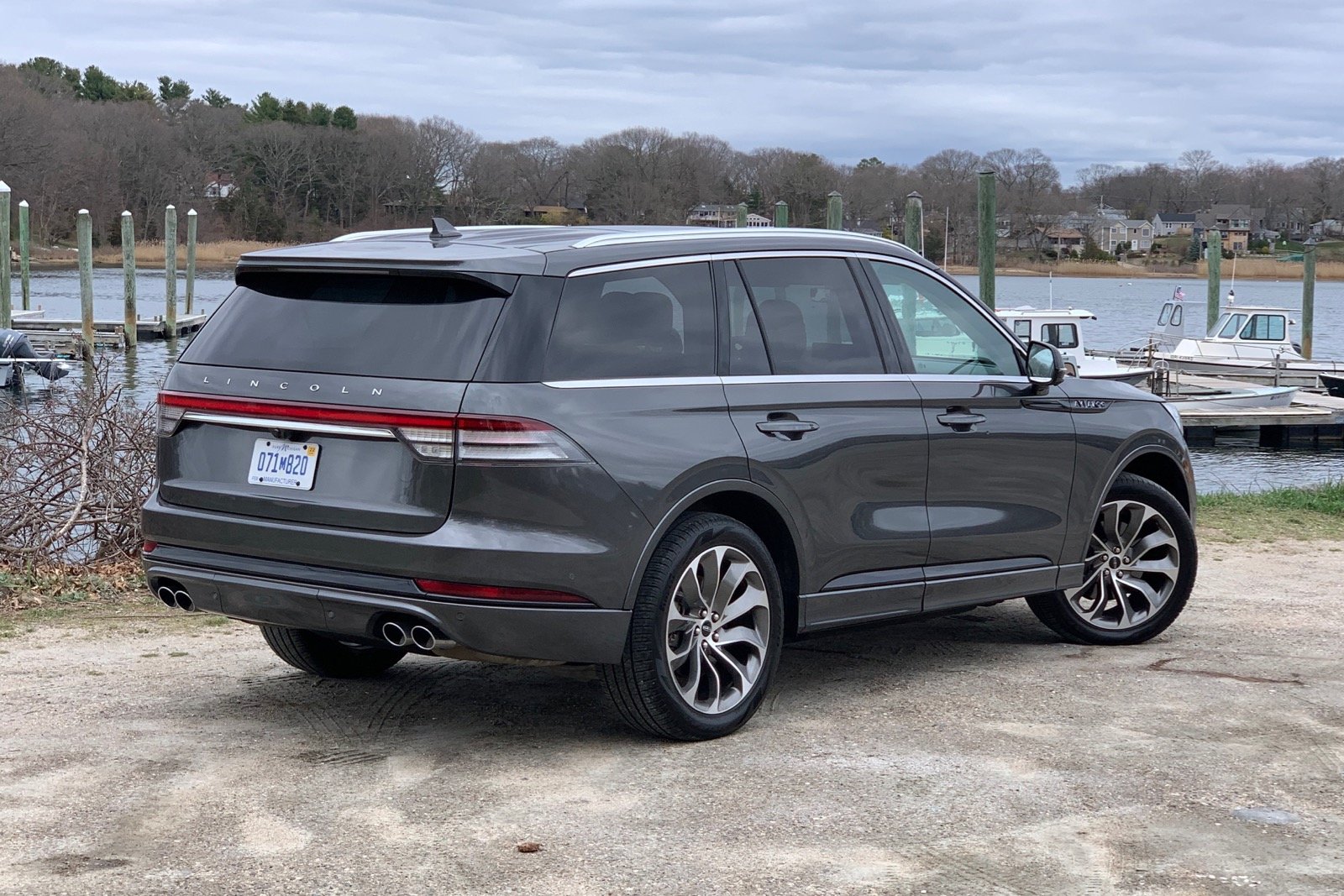 In our week of combined city and highway driving, we observed an average fuel economy of 22.3 mpg. That’s not too far off from the EPA-estimated 23 combined mpg for the PHEV.

These prices are no joke, but the Aviator is meant to be the most luxurious and comfortable Lincoln if you don’t need the trailer-and-people-hauling abilities of the Navigator. More crucially, Lincoln wants the Aviator taken seriously when compared to other midsize luxury SUVs. Lincoln is set on repositioning the brand from “A Nice Ford” to a real player. And, yes, the prices on the higher end of the trim lineup edges into Range Rover Sport territory. But to be a comfortable, confident, and advanced three-row luxury SUV in 2021, that’s what it’s going to cost. The Aviator justifies the price and is a serious indicator of Lincoln’s resurgence.

What's your take on the 2021 Lincoln Aviator?

Have you driven a 2021 Lincoln Aviator?
Rank This Car

Enter your zip to see incentives for a new Aviator in your area.