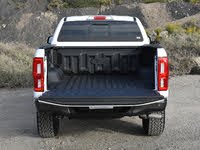 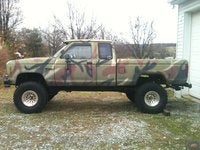 Looking for a New Ford Ranger in your area?

Especially when equipped with the new Tremor Off-Road Package, the 2021 Ford Ranger is a solid all-rounder in the midsize truck segment. 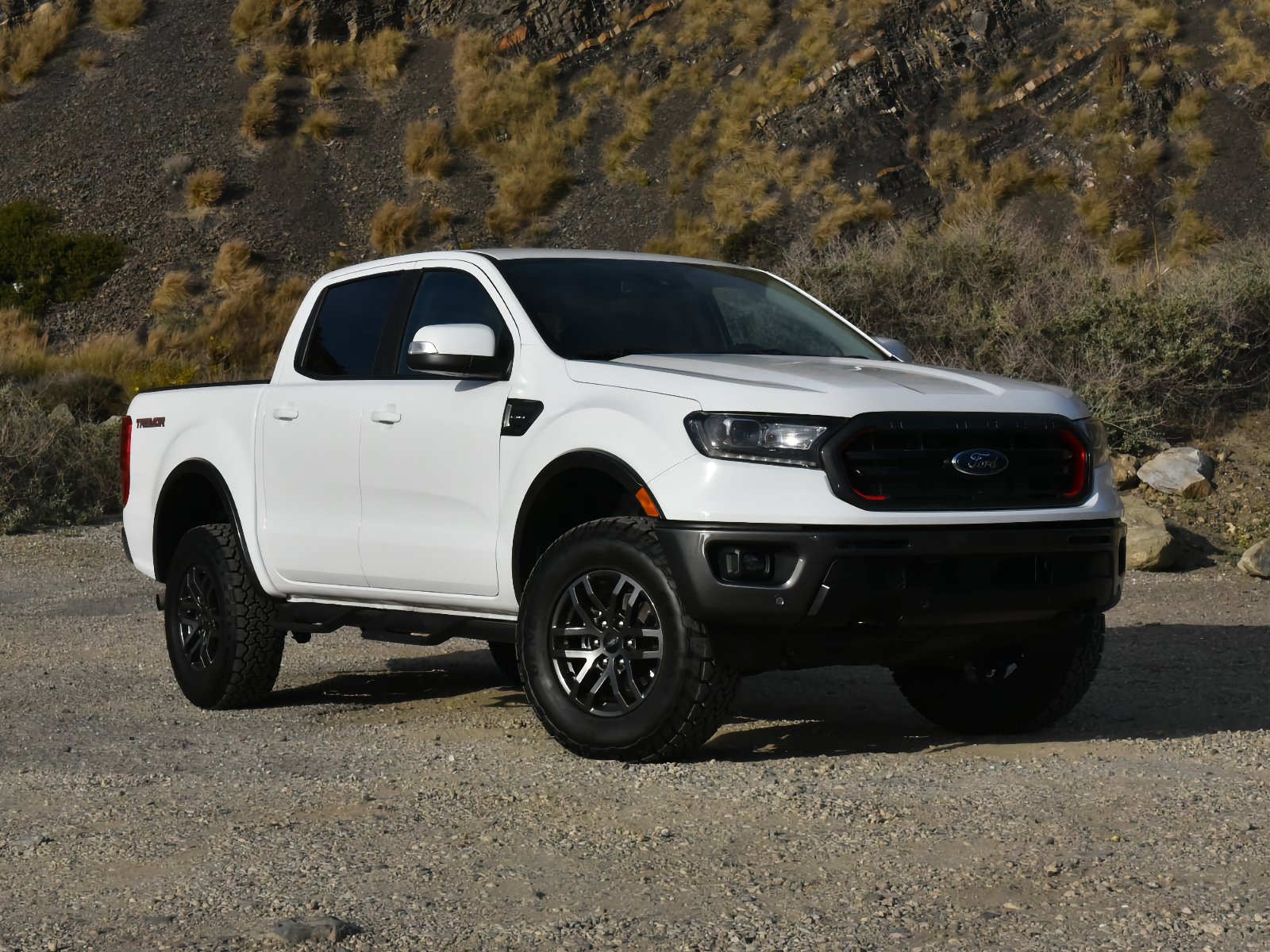 Ford is no stranger to off-roading and has offered FX4 option packages for its pickup trucks for years. The Tremor, however, is relatively new.

Briefly used on a sport-truck version of the 2014 F-150, where the name signaled a regular cab model fortified with Ford’s twin-turbocharged 3.5-liter V6 engine, the Tremor name reappeared on the updated 2020 F-Series Super Duty. Since then, Ford has expanded it to both the 2021 F-150 and 2021 Ranger lineups.

Tremor now signifies a Ford truck with the credentials to tackle difficult terrain. We’re not talking the high-speed, Baja-blasting type of driving for which the F-150 Raptor is purpose-built. We’re talking about low-speed rock crawling.

For the 2021 Ford Ranger, Tremor equipment is one of a handful of changes to the midsize pickup for the model year. Other news includes a new STX Special Edition Package, a Black Package, and minor equipment changes. 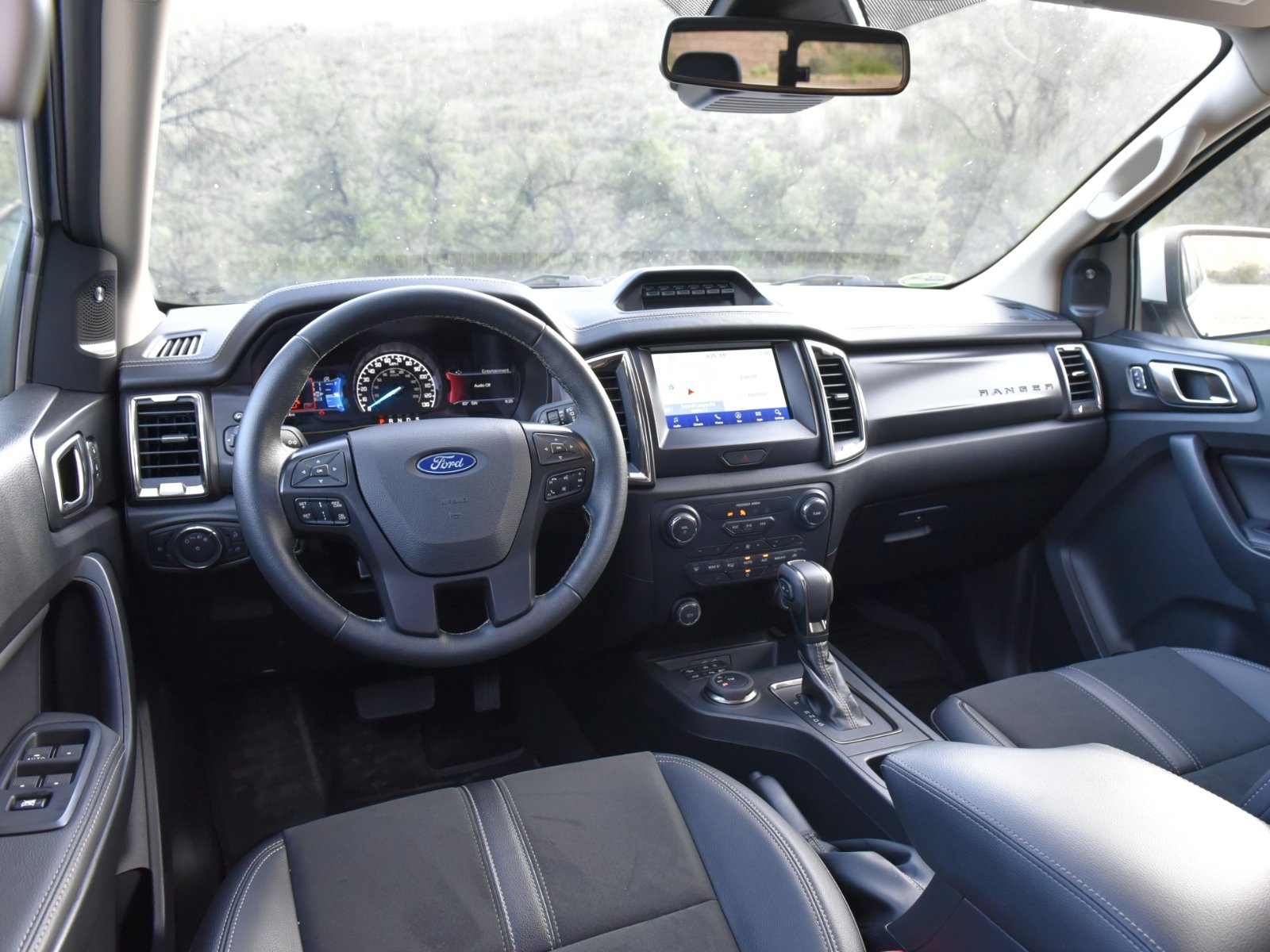 Ford sells the 2021 Ranger in SuperCab (extended cab) and SuperCrew (crew cab) styles. SuperCabs have a six-foot cargo bed, while SuperCrews have a five-foot cargo bed. Trim levels include XL, XLT, and Lariat, and every Ranger has the same turbo four-cylinder engine and 10-speed automatic transmission, with rear-wheel drive (RWD) or four-wheel drive (4WD).

Our test truck came in SuperCrew Lariat configuration, equipped with the Tremor Off-Road Package, a spray-in bedliner, and a SecuriCode keyless entry pad. The price tag was $46,865, including a $1,195 destination charge.

With Tremor equipment, the Ranger boasts a subtle increase in stance thanks to its unique 17-inch dark gray wheels and 32-inch all-terrain tires. These, plus red grille accents, front and rear tow hooks, off-road hoop-style side steps, and “Tremor” graphics on the sides of the bed, convey the truck’s off-roading abilities. The result is a purposeful look, the Tremor sitting a little higher and wider than a typical Ranger.

Inside, the combination of Lariat trim and the Tremor’s simulated suede seat inserts, all-weather floor mats, and six upfitter switches residing atop the dashboard made the test truck the best-equipped Ranger money can buy.

Clean and contemporary design characterizes the Ranger’s cabin, which offers simple radio and climate controls, appealing partial digital instrumentation, an 8-inch touchscreen infotainment system, and switchgear that wouldn’t be out of place in a Lincoln. As is true of any midsize pickup truck, hard plastic is the rule instead of the exception, but it doesn’t look or feel cheap. 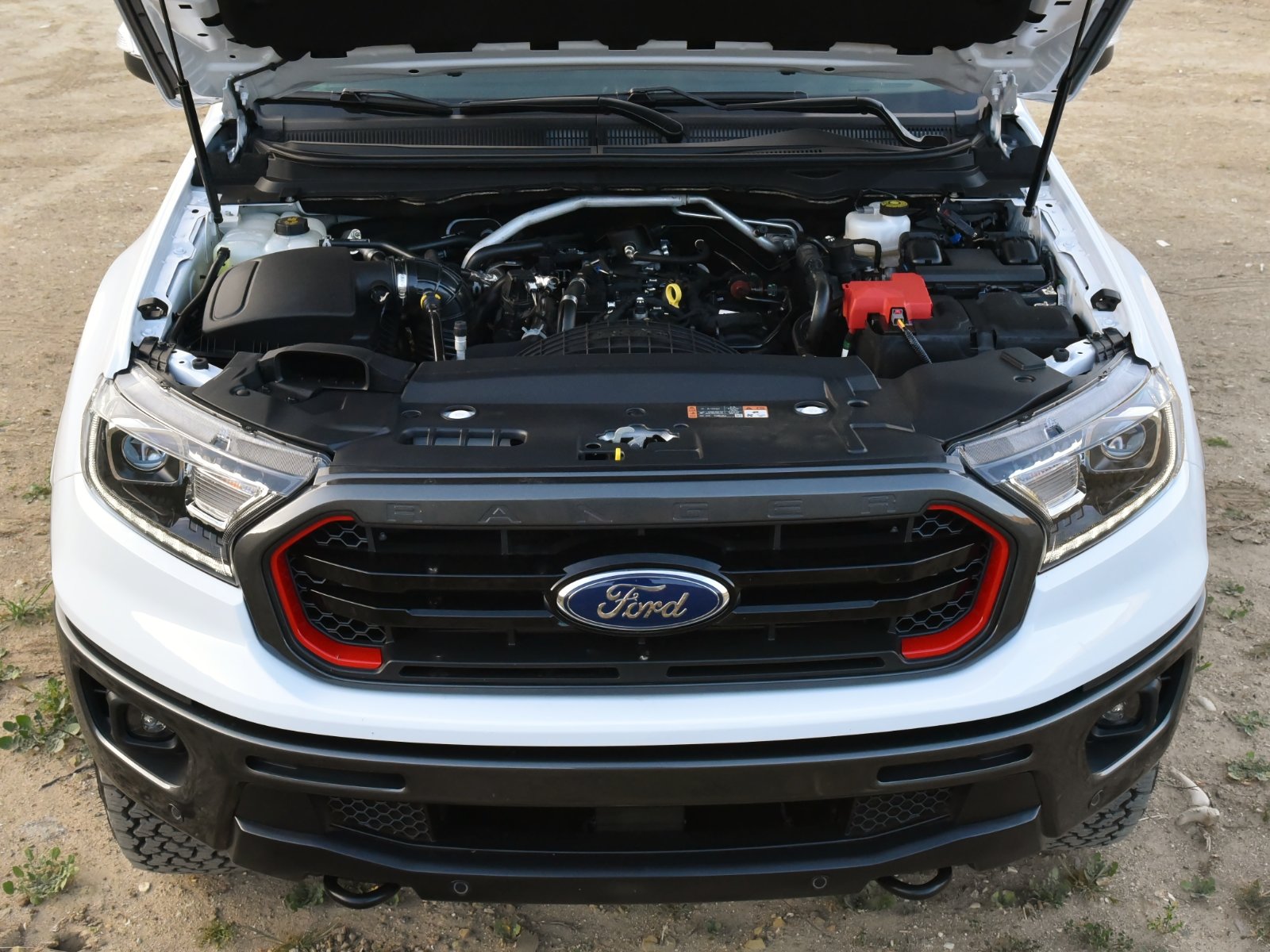 The only powertrain available in a 2021 Ford Ranger is a turbocharged 2.3-liter four-cylinder engine paired with a 10-speed automatic transmission. With 270 horsepower at 5,500 rpm and 310 pound-feet of torque at 3,000 rpm, the Ranger suffers no deficit in power. Plus, under acceleration, the muffled chuffing engine note gives the Ranger a distinctive personality.

With 4WD, you switch from 2-Hi to 4-Hi or 4-Lo using a rotary dial on the center console. Ranger Tremors also include a standard Terrain Management System with Normal, Sand, Mud/Ruts, and Grass/Gravel/Snow settings. An electronic locking rear differential also helps to maximize traction, and Ford includes Trail Control on every Ranger Tremor. Trail Control is a low-speed off-road cruise control that automatically maintains steady progress on challenging terrain so that the driver can focus on steering through the rough stuff.

With the Tremor Off-Road Package, the Ranger has a new off-road suspension. Revised springs and Fox off-road performance shocks give the truck added suspension travel and firmer off-road damping combined with softer on-pavement compliance. Thanks to these modifications, Tremors supply a whopping 9.7 inches of ground clearance and improved approach, breakover, and departure angles. A front bash plate is standard equipment, as well as underbody skid plates to protect the truck’s mechanicals from damage.

Depending on the configuration, a 2021 Ford Ranger can tow up to 7,500 pounds and haul as much as 1,860 pounds of payload. In Tremor specification, the towing capacity remains intact, but the maximum payload decreases to 1,430 pounds. The EPA fuel economy rating falls to 19 mpg in combined driving because this version of the Ranger is rated to return 19 mpg in the city and 19 mpg on the highway. We averaged 18.5 mpg on our testing loop.

Driving a Ford Ranger is enjoyable. The turbocharged engine supplies swift acceleration regardless of your geographic elevation, and it demonstrates a refinement unmatched by anything in the segment aside from a Honda Ridgeline.

Since you’ll spend most of your time guiding the Ranger Tremor down paved roads, know that the suspension tuning doesn’t beat you up and the whirring of the all-terrain tires is pleasantly distant rather than irritatingly amplified. Overall, the Tremor’s underpinnings are preferable to a Lariat’s standard suspension, which allows for too much body motion over undulating pavement. Handling is average but on par with other off-road-oriented midsize pickup trucks.

Take this truck into the dirt, and you’re in for a treat. The trail we traveled required 4-Hi and the Mud/Ruts Terrain Management setting, and the Ranger Tremor proved just as capable as a recently tested Tacoma TRD Pro in the same location. And with regard to turning radius, it proved more maneuverable than the Toyota.

We didn’t stick around the area for long, though, because some moron in a Silverado showed up and started doing giant looping donuts in a field, throwing up a cloud of dust sure to attract the attention of local law enforcement. Tread lightly, my friends. Especially when you’re driving someplace you shouldn’t be. 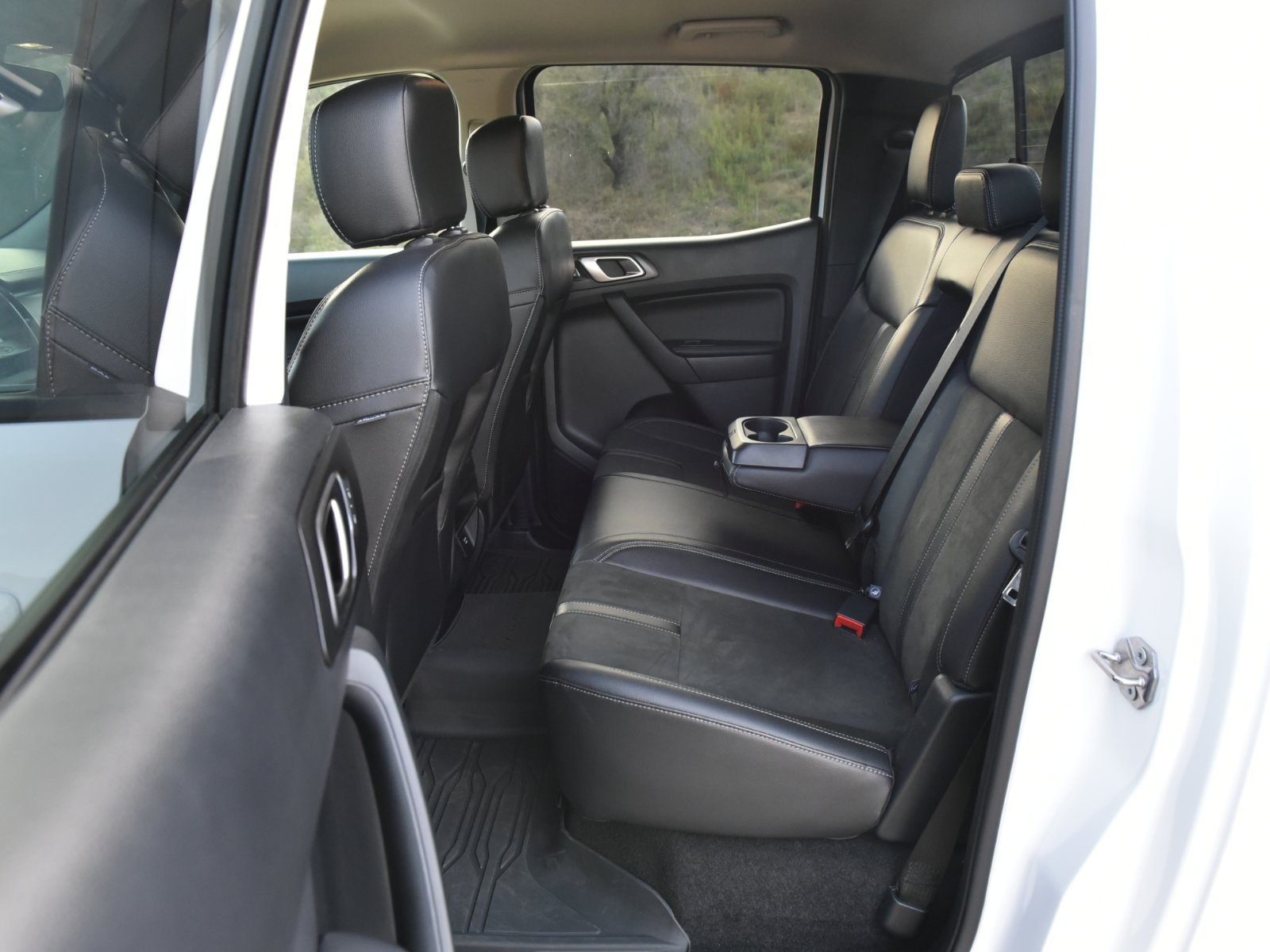 Ranger Tremors come with sturdy individual hoop-style step bars underneath each door, coated with a granular surface similar to the spray-in bedliner material. To ensure maximum clearance they’re mounted rather high, which limits their usefulness only to shorter people. Furthermore, they stick out far enough to make themselves a problem for taller people. If you wear shorts, they’re going to scrape your legs up as you attempt to step over them.

Our test truck included SecuriCode, a modestly priced upgrade that allows you to lock and unlock the doors using a passcode. That way, you can leave your key in the truck rather than take it with you for adventuring, limiting the chance that you might lose it. Unfortunately, it looks like it is glued onto the doors, which, by the way, sound tinny and unsubstantial when you slam them shut.

Once you’ve settled into the cab, you’ll find the Ranger Tremor’s eight-way power-adjustable driver’s seat and six-way power-adjustable front passenger’s seat quite comfortable. They’re soft yet supportive, and they’re heated for cold winter temperatures. But the driver’s seat needs more seat track travel to accommodate tall people who like to sit up high behind the steering wheel.

There is a side benefit to limiting how far back the front seats will go. Rear-seat space is more accommodating and comfortable than any midsize truck except for the Honda Ridgeline. But Ford doesn’t provide rear air conditioning vents and the sliding rear window is not power-operated.

Despite the hand-operated parking brake on the center console, the Ranger offers decent storage for your odds and ends. To access the storage bins underneath the rear-seat cushion, it inconveniently lifts as a single rather than a split piece. This design is unhelpful.

The truck’s tailgate is undampened, slamming down in unsophisticated fashion, but its light weight makes it easy to lift and to close. The 43.3 cubic-foot cargo bed (51.8 cubic feet for SuperCabs) is roomy, but aside from the test truck’s four tie-down hooks, it lacked cargo solutions. Ford does offer a long list of accessories to help you custom-tailor the Ranger to specific utility requirements. 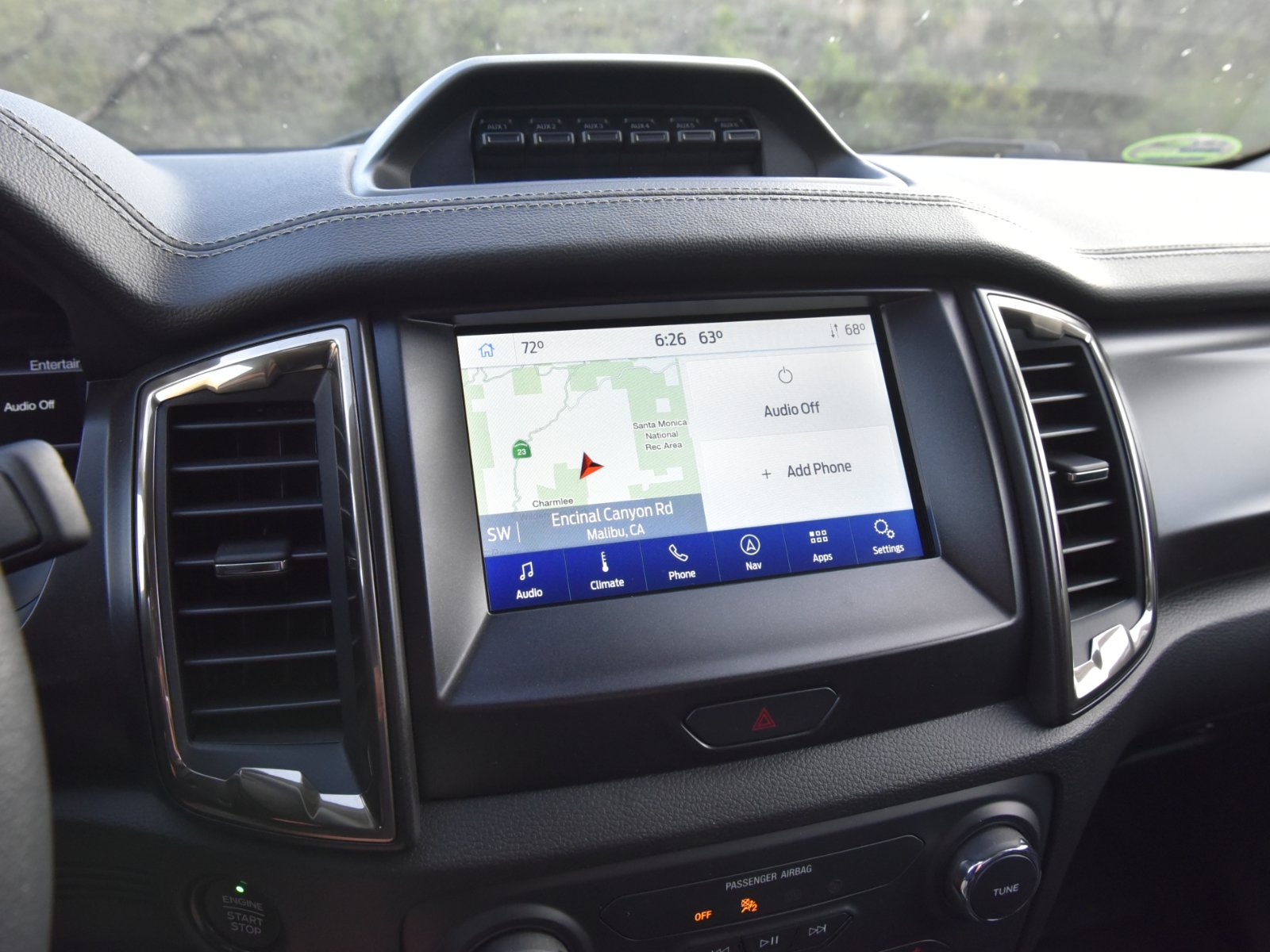 Currently, Ford is phasing Sync 3 out of its vehicles in favor of a faster, more powerful, and more sophisticated Sync 4 system. However, in the Ranger, the infotainment system is competitive with what you’ll find in other midsize pickup trucks.

During testing, the voice recognition technology performed in a hit-or-miss fashion. For example, when asking for directions to my favorite national-chain Mexican food restaurant, the Ranger gave me a list of local bowling alleys. I told the system I wanted to listen to reggae music, and it told me there wasn’t any media plugged into the USB port. It couldn’t find the White House but had no trouble finding my own house.

Notably, the climate system is tied into Sync 3, so you can set a new temperature simply by pushing the talk button and making the request. 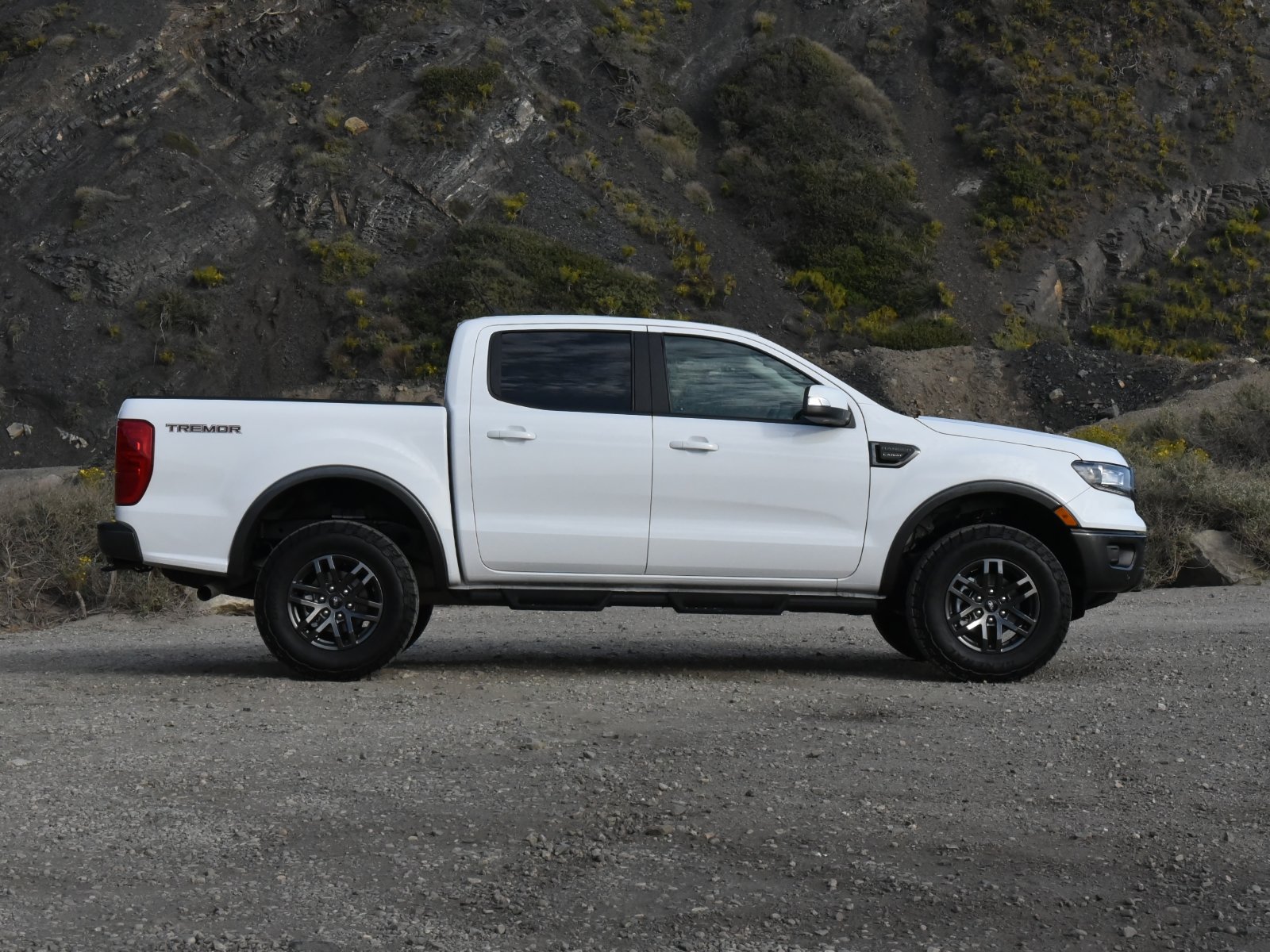 Ford offers its Co-Pilot360 collection of driver-assist features as standard or optional equipment across the Ranger lineup. Highlights include forward-collision warning, automatic emergency braking, lane-departure warning and lane-keep assist, and automatic high-beam headlights. I set the lane warnings to provide vibrations through the steering wheel, and they were so subtle as to go unnoticed.

A blind-spot warning system with rear cross-traffic warning is also a part of this package, and it includes trailer coverage. Adaptive cruise control is standard with Lariat trim but does not offer full-stop capability, let alone stop-and-go functionality. With regard to distance maintenance, the adaptive cruise control behaves in a smooth fashion.

Ford ensures you benefit from maximum visibility. In addition to a reversing camera, and depending on the configuration, the Ranger offers rain-sensing wipers, wiper-activated headlights, and a wiper de-icer system. Front and rear parking sensors are also helpful when parking or maneuvering on a narrow trail.

Crashworthiness is good, but not great. The National Highway Traffic Safety Administration (NHTSA) gives the truck an overall rating of four stars, mainly because of its three-star rollover resistance rating. In Insurance Institute for Highway Safety (IIHS) testing, the Ranger gets top scores aside from an "Acceptable" rating for front-passenger protection in the small-overlap frontal-impact test and a "Marginal" rating for its headlights. 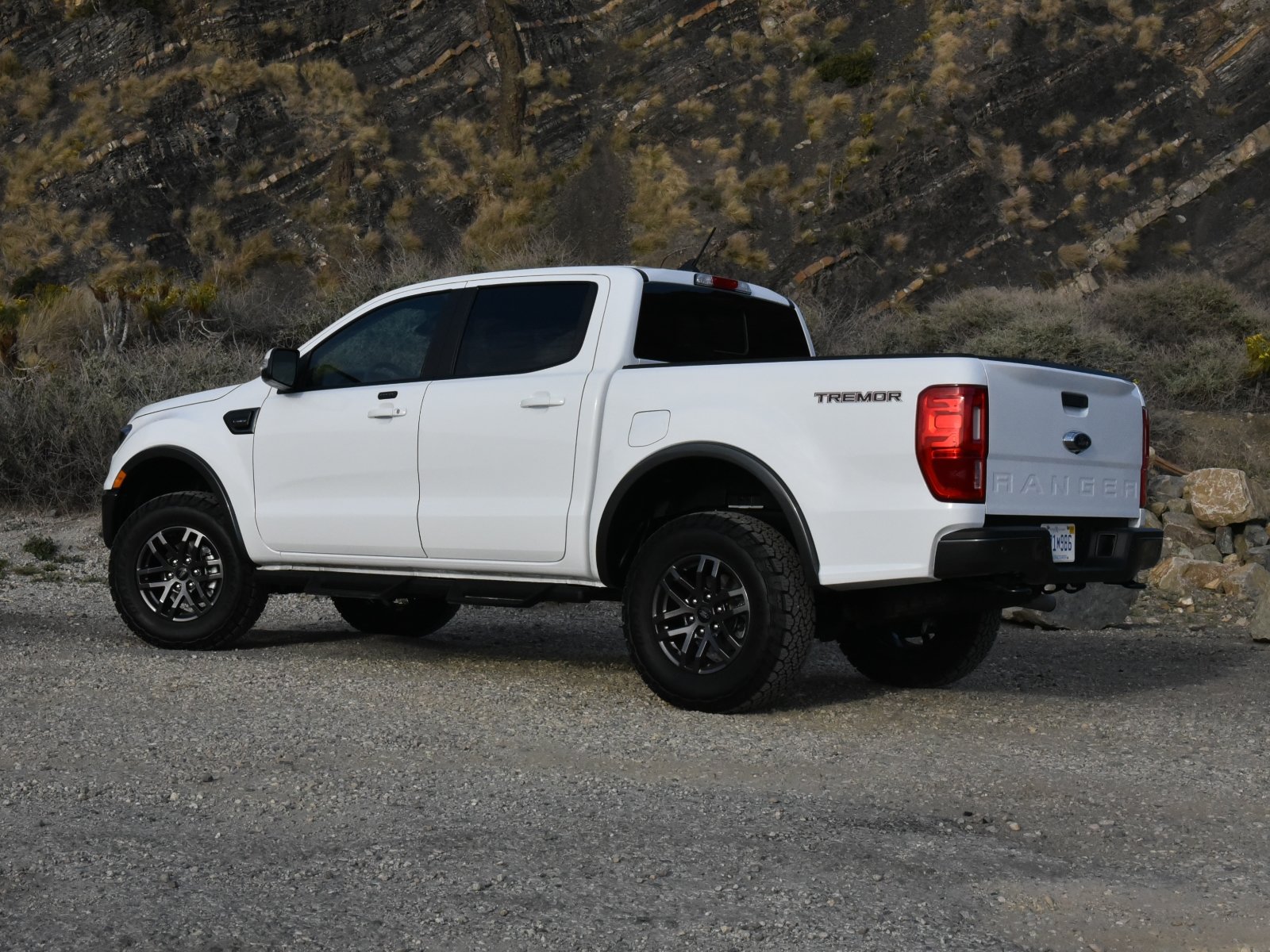 Nothing about the 2021 Ford Ranger stands out as a particularly good value in relation to its competition, yet it comes across as one of the most refined, comfortable, and capable models in the midsize pickup truck segment.

Less truck-like than its body-on-frame competitors, but more truck-like than a Honda Ridgeline, the Ranger appeals for its all-around goodness. From its comfortable seats and turbocharged engine to its high tow/haul ratings and the Tremor’s off-road talents, Ford’s midsize truck is broadly appealing to a wide range of potential customers.

Have you driven a 2021 Ford Ranger?
Rank This Car

Enter your zip to see incentives for a new Ranger in your area.

I find it very annoying that the dealer stick all them ads up with now pictures, and or no price. They should not be able to post till there are pics/ & a price. For instinance 2021 ford ranger pick...