Looking for a New Dodge Charger in your area? 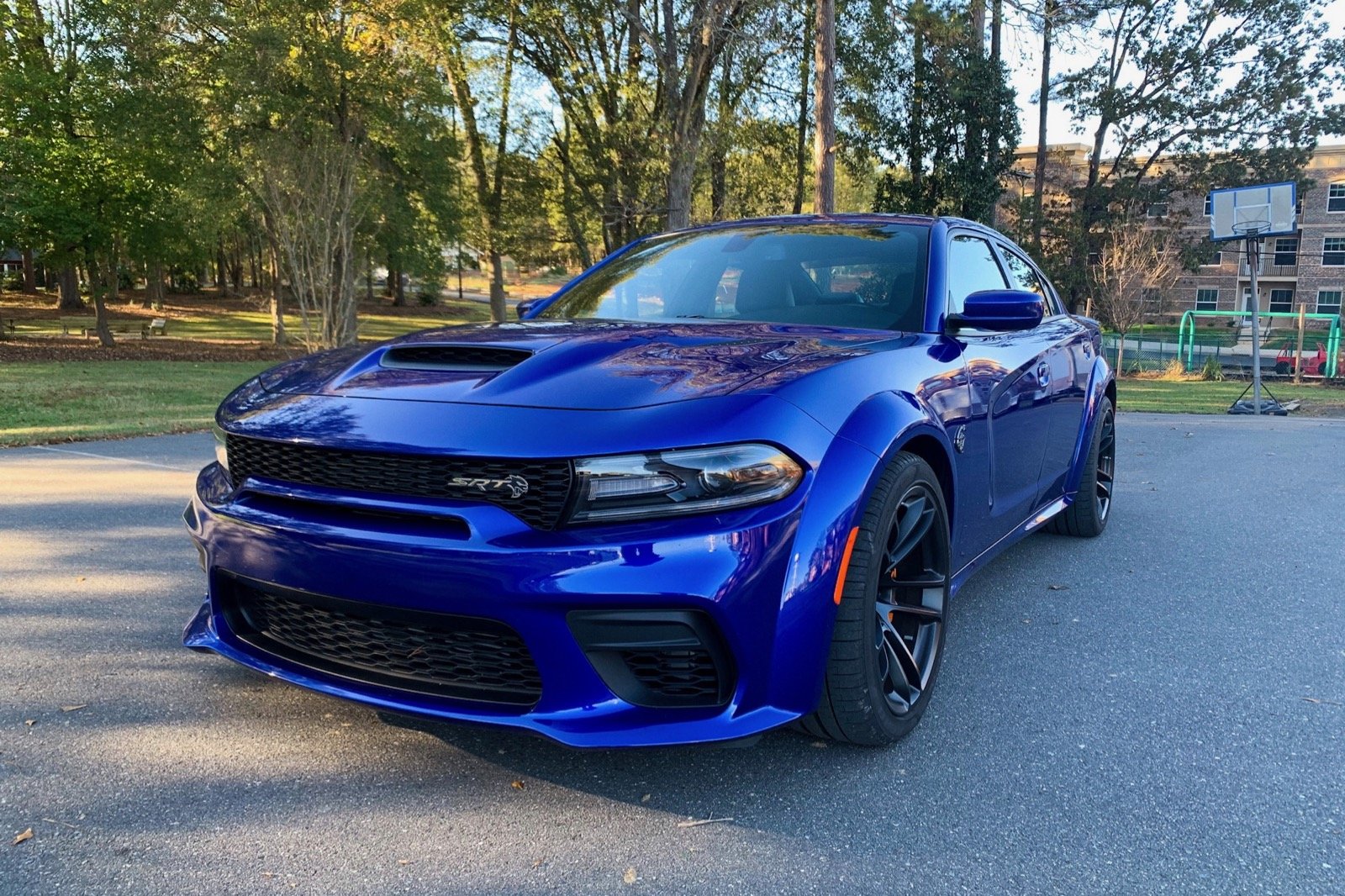 When it comes to American muscle cars, few do it better than the Dodge Charger. It’s a unique breed—new four-door muscle cars just aren’t sold in the United States. anymore. There is a new track-ready variant for the 2021 model year that pushes the limits of the car’s Hellcat V8 engine. Tamer versions of the car offer less horsepower but can still fit three car seats across the back of the car’s roomy cabin and have accommodations comfortable enough to make it a daily driver. 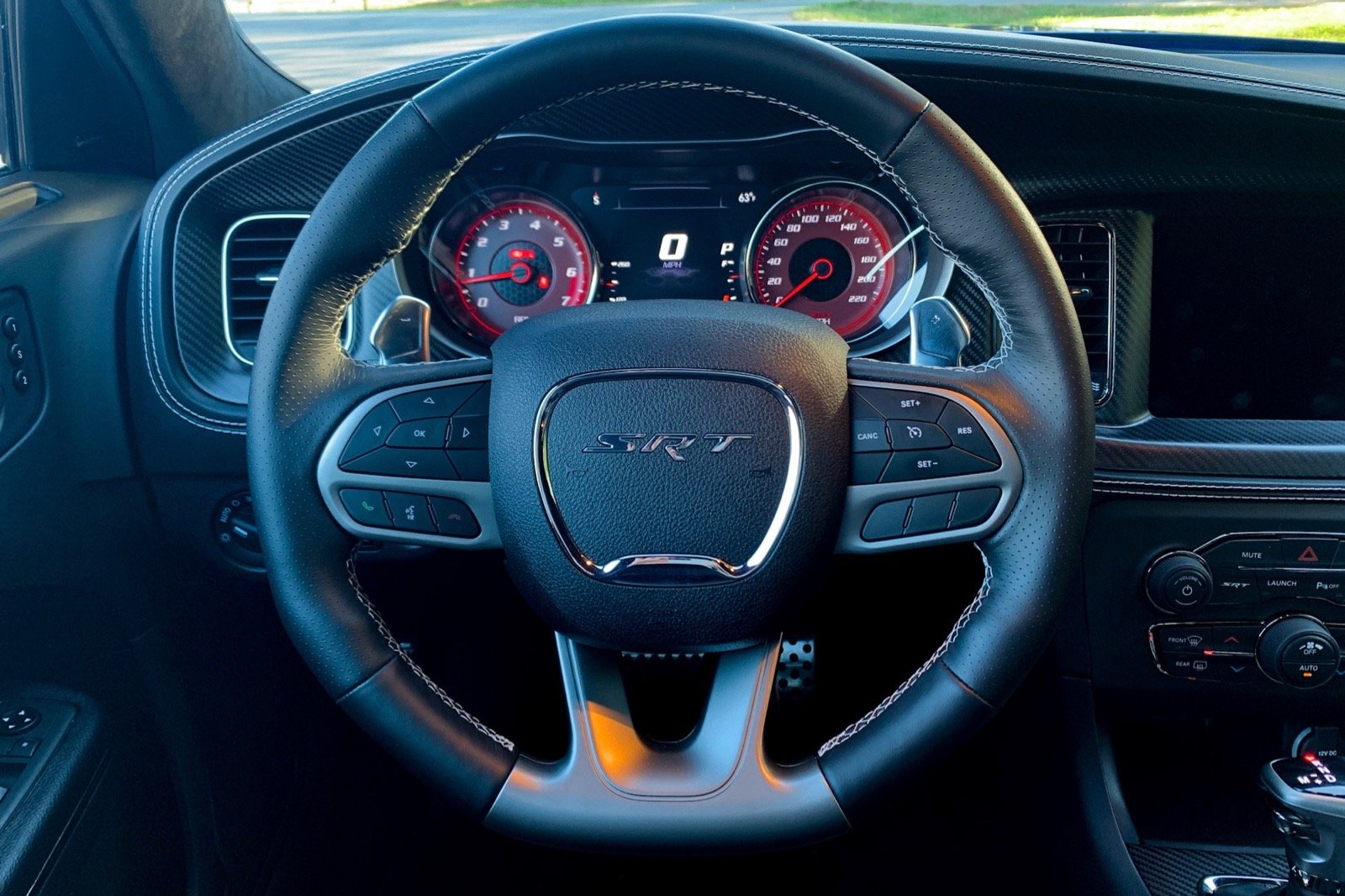 On the surface, there’s not too much differentiation between the models. Dodge says that’s on purpose giving the “if you know, you know” wink, wink, nudge, nudge edge to customers that are part of its so-called “brotherhood of muscle." There are options boxes to check here and there, as well as the requisite Hellcat badging that give clues to outsiders as to what’s under the hood of the Charger.

Dodge sells the sedan in regular and widebody formats. Some models come standard with widebody styling while others have it as an option or aren’t available in the format. The wider body styling (an extra 3.5 inches) gives the car a more athletically suave stance, something played out nicely with the new-for-2021 Dodge Charger SRT Hellcat Redeye’s functional performance hood that can be optioned in Satin Black.

The Charger doesn’t have a shortage of tire, wheel, brake, or exterior color options. The base SXT model comes standard with 17-inch wheels, while the Charger R/T alone has six different 20-inch wheel options—18 options are available in total across all trim levels. Red brake calipers can be added to most models, and the same goes for the choice between performance or all-season tires. Thirteen paint jobs are available in shades with fun-sounding names like Hellraisin, Triple Nickel, and Frostbite.

That’s all to say that a Charger looks like a Charger, no matter which Charger you choose. However, it is often difficult to determine the age of the model to the casual observer as the Charger has had pretty much the same design for the last decade. That may be both a blessing and a curse.

The interior of the Charger has been updated over the years as technology has advanced, but it still doesn’t have much in the way of comfort or convince features. The fit and finish of the car have gotten much better over time as the model has aged. However, one look at the gauge cluster or climate controls will tell you exactly how old the Charger’s current generation is.

There’s a fair amount of hard plastic and rubberized surfaces in the Charger. Among Fiat Chrysler Automobiles (FCA) products, it’s closer to the utilitarian Jeep Wrangler than it is to the plush Ram 1500.

Cloth seats are standard on all but the highest trim levels, which get Nappa leather. The cars have either a six-way or eight-way power-adjustable driver’s seat. Option packages and more expensive Charger trim levels allow access to heated and ventilated seats, though the availability varies.

This is fine when the price of the car is under $40,000, but some models are upwards of $70,000 and for that buyers should expect more premium accommodations and technology. 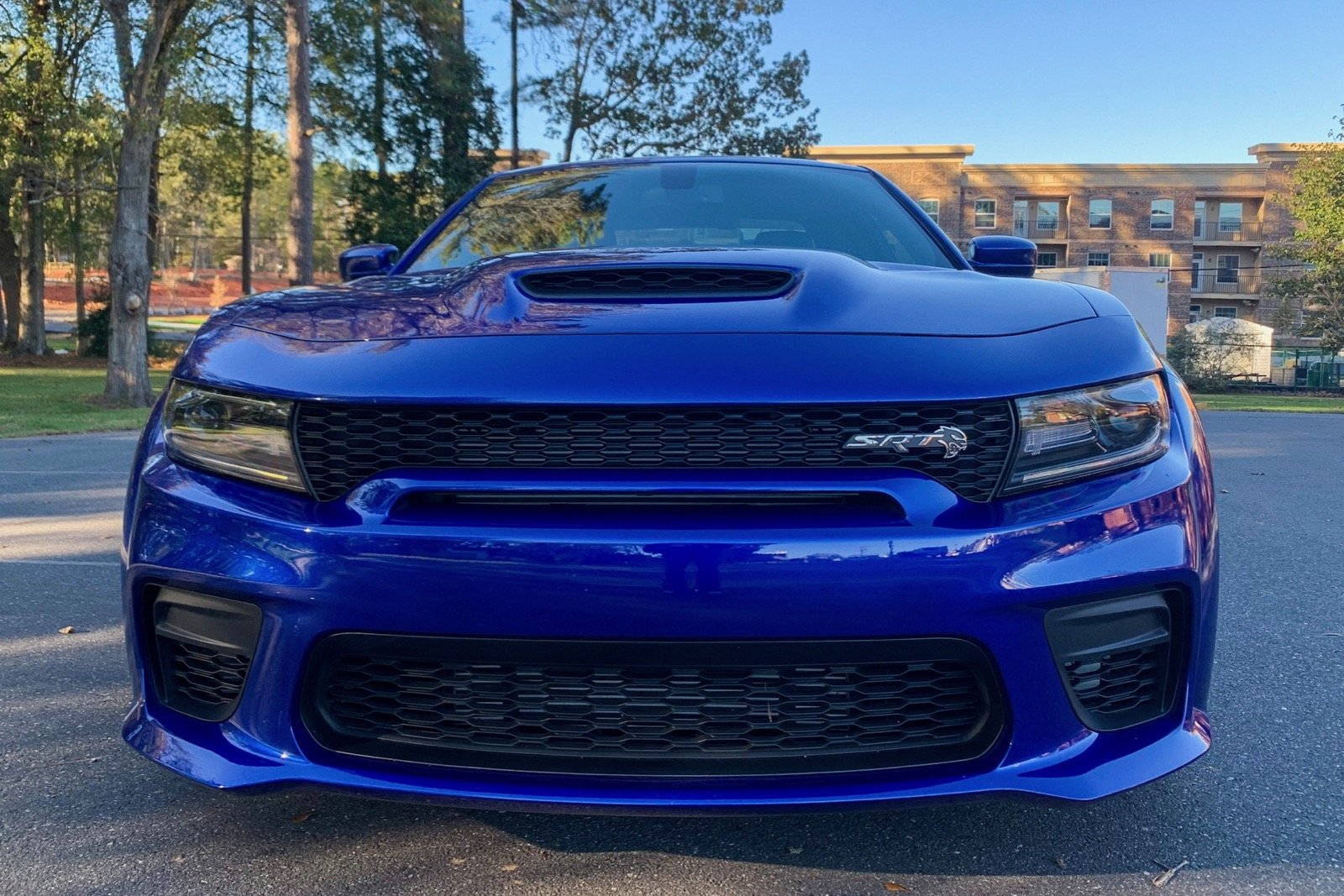 This is where Charger shines, and the company knows it. That’s part of the reason why Dodge offers so many different models for buyers to choose from. The Charger SXT, SXT AWD, GT, and GT AWD are all powered by a 3.6-liter V6 engine that is paired with an eight-speed automatic transmission. The powertrain delivers up to 300 horsepower and 264 pound-feet of torque and is the most fuel-efficient choice for Charger buyers.

The Charger R/T has a 5.7-liter HEMI V8 under its hood that is matched with an eight-speed automatic transmission. It delivers 370 hp and 395 lb-ft of torque. This engine gives the Charger a 1,000-pound towing capacity.

A 392-cubic inch (6.4-liter) HEMI V8 in Charger Scat Pack models is mated to the same eight-speed automatic transmission used in the R/T. The engine yields 485 hp and 475 lb-ft of torque.

Under the hood of the Charger SRT Hellcat is Dodge’s Hellcat engine, a supercharged 6.2-liter HEMI V8 that is also paired with an eight-speed automatic transmission. That combination makes 717 hp and 650 lb-ft of torque.

The top-of-the-lineup Dodge Charger SRT Hellcat Redeye has the most powerful engine option. It’s a supercharged 6.2-liter HEMI high-output V8 that is mated to a high-performance eight-speed automatic transmission. Its 797 hp and 707 lb-ft of torque are easily managed thanks to some truly impressive engineering. Whether on the track or off, the power seems manageable and available when you need it, but quietly at the ready when you don’t. This version of the Charger can just as easily creep through a small town during heavy traffic as it can blow by a line of speed-limit enthusiasts on the highway.

Given its output, it should come as no surprise that the SRT Hellcat Redeye’s powertrain is the least fuel-efficient of the lot, getting an EPA-estimated 12 mpg in the city, 21 mpg on the highway, and 15 mpg combined.

No manual-transmission options are available in the Charger. In its highest performance variant, the automatic transmission delivers smooth upshifts with the whine of precision engineering at work. However, it is a little clunky going back down, though a quick increase in braking from well over 100 mph to a more manageable 45 mph on a track is likely to make any car perform this way. On the road in traditional driving situations, the transmission was a gem.

Models with "AWD" in their name are all-wheel drive. Rear-wheel drive is standard on most models. Configurable drive modes are either standard or available at most higher trim levels, while SRT models get a Performance Pages function for the infotainment system, allowing for more in-depth adjustment of vehicle settings.

The Charger offers a connected driving experience that doesn’t erode at speed. The car goes where you want it when you want it—and this includes parking. With our test car's Brembo binders, braking was a little softer than ideal for track driving, even when the brakes were relatively cold. On the street, the braking performance was perfectly fine. 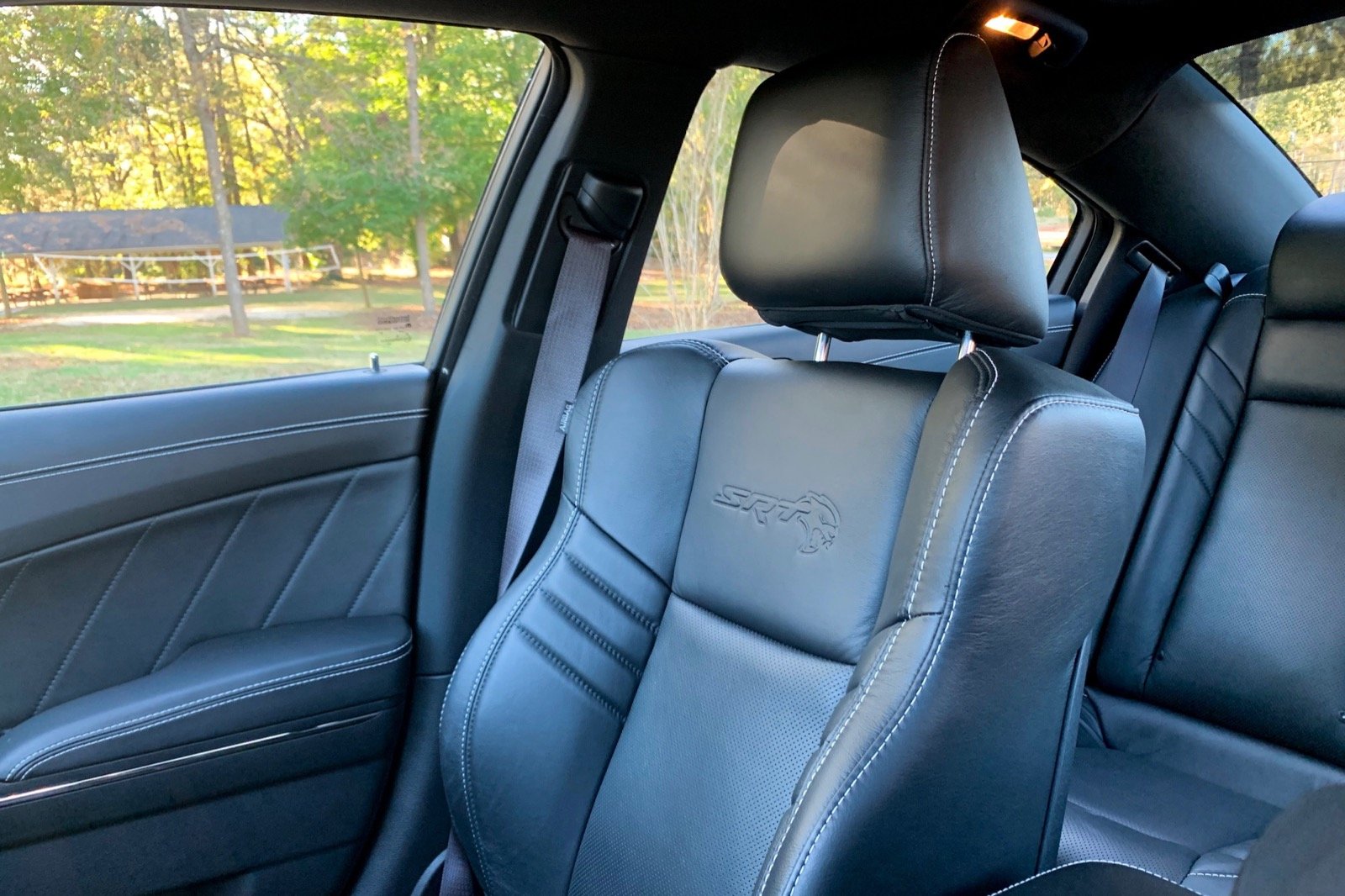 The Charger is Dodge’s four-door, five-passenger sedan. The model functions surprisingly well as a family car, balancing out the need for speed and power with the convenience of a spacious back seat and comfortable accommodations.

Most of the technology the driver sees in front of them is dated, though it looks alright and is easy enough to read. The look of the instrument cluster varies by model with 140 mph, 160 mph, 180 mph, 200 mph, and 220 mph versions that are dealt out according to the car’s top speed.

The steering wheel is better in both form and function, providing easy-to-reach and use buttons for all the necessary in-car functions.

Paddle shifters are attached to the wheel in all but the base model and are usable for those with larger hands. While turning the corners on a track, it’s easy to accidentally hit one of the shifters and find yourself stuck in a gear that was unintended. Thankfully, when this happens, a message pops up on the driver information display to tell you how to get out of the mode.

A 60/40 split-folding rear seat expands the already-spacious trunk into the cabin for additional storage space. Compared to other large cars, the Charger has about average cargo space. 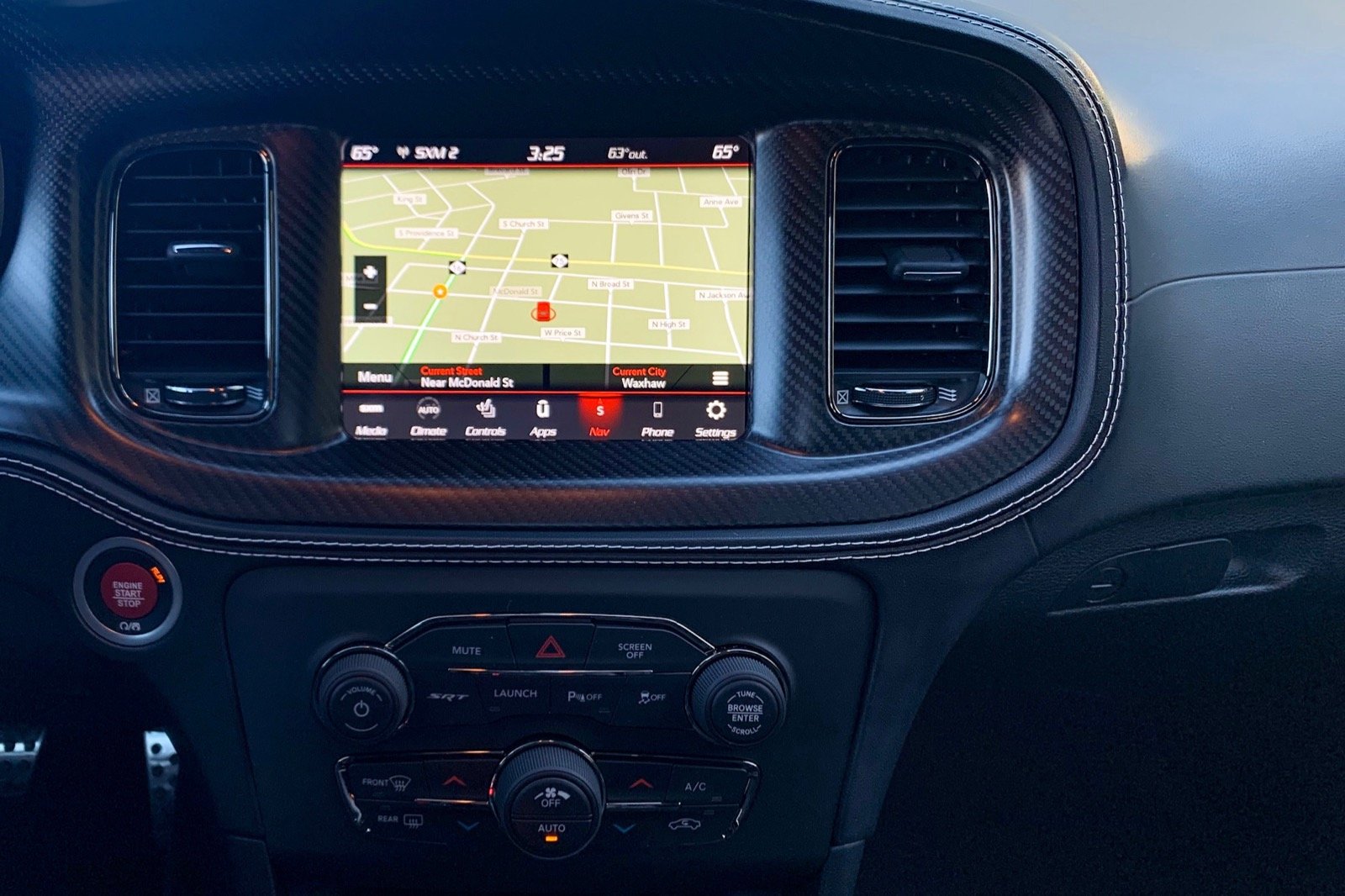 There’s no head-up display available in higher trim levels, which makes using navigation less than ideal, because of the cramped screen display. The car also feels lower-tech because its buttons and dials are made up of interchangeable switchgear that doesn’t have digital faces or unique coloring.

The Uconnect infotainment system is easy enough to navigate but some functions are buried too deeply in menus. The latest version of Uconnect isn’t yet available on the Charger, but it does address many of these types of issues and utilizes a new, larger screen in other Dodge products like the 2021 Durango. 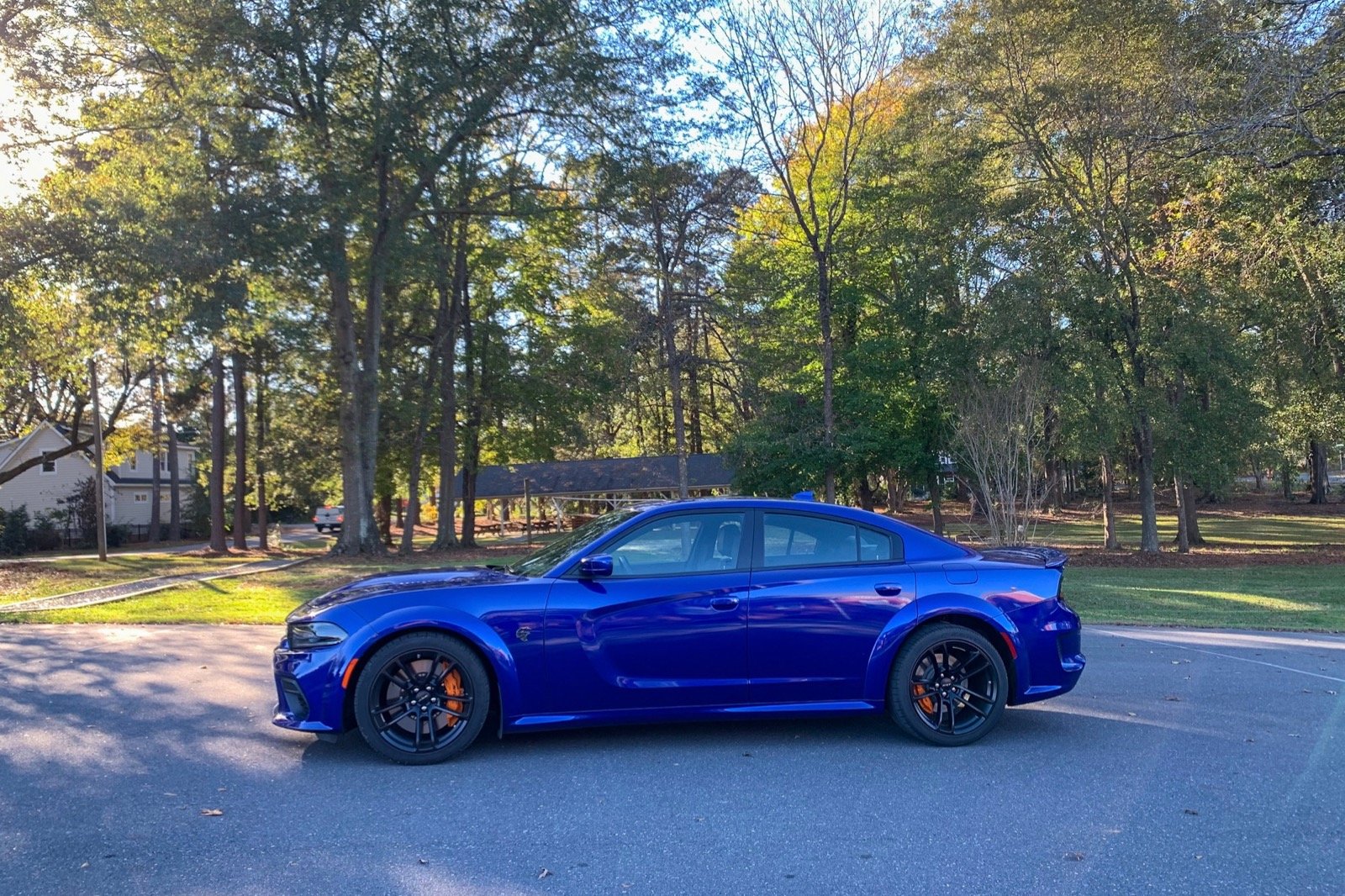 The 2021 Dodge Charger hasn’t been crash-tested by the Insurance Institute for Highway Safety (IIHS) but the structurally-similar 2020 model has. It received mostly "Good" crashworthiness ratings but "Poor" marks for headlights.

For the 2021 model year, the National Highway Traffic Safety Administration (NHTSA) gave the Charger a four-star overall safety rating, out of a possible five stars.

While the Charger may be cheap at the outset, getting more power comes at a steep price. When you consider the interior of the car and the historically awful predicted reliability rating of the sedan, it’s hard to make the case for putting it on the top of your list, unless you’re specifically looking for a high-horsepower four-door American sports car.

When it comes to American muscle, the Charger doesn’t have any direct competitors. The forthcoming high-performance variants of the Cadillac CT4 and CT5 luxury sedans will attempt to go toe-to-toe with some of the Charger’s features, but likely not all of them.

Until then, there’s a number of sports coupes awaiting consideration including the Ford Mustang and Dodge Challenger. The smaller Toyota 86, Subaru BRZ, and Mazda MX-5 Miata are also worthy of consideration if you’re looking to pack a lot of fun into a budget-friendly daily driver though none of those have the seating and storage space the Charger has.

GuruCQPV9 The car is a winner all the way.

Have you driven a 2021 Dodge Charger?
Rank This Car

Enter your zip to see incentives for a new Charger in your area.