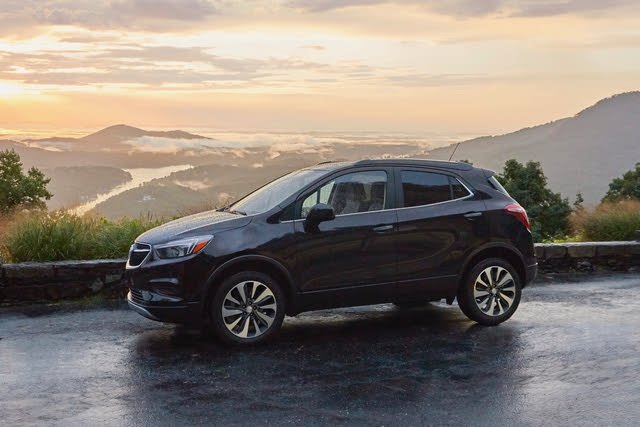 Looking for a New Buick Encore in your area?

The Buick of years past was known for making big, soft, grandparent vehicles with little in the way of driving personality. That’s all changed over the years, and despite the fact that the brand only sells crossovers, there’s more character and modern tech than ever before. That’s sort of true for Buick’s smallest vehicle, the Encore, which is a tiny crossover that’s available with many of the upscale features that buyers expect from General Motors’ mid-level brand.

While it shares much of its underpinnings with the Chevrolet Trax, the Buick Encore does a solid job at hiding its pedestrian origins under layers of Buick sound insulation and decent interior materials. The Encore’s price sets it in line with the mainstream competition from brands such as Hyundai, Toyota, and Honda, instead of premium brands that Buick’s other vehicles play against. Recently, the automaker added a larger Encore GX model to its lineup, but it’s a completely separate model that is both larger and more expensive.

With a trimming down of the Encore lineup for 2021, Buick did away with the more powerful 153-horsepower 1.4-liter engine that provided juice for the previous model. Every 2021 Encore is now powered by a turbocharged 1.4-liter engine that produces 138 hp and 148 pound-feet of torque. It’s mated to a six-speed automatic gearbox and either front-wheel drive (FWD) or all-wheel drive (AWD), but only the Preferred trim is available with the AWD option.

Inside, the Encore gets an 8-inch touchscreen that runs Apple CarPlay and Android Auto. A 4G LTE WiFi hotspot is also standard, and navigation with traffic and weather data is optional. The Encore gets six speakers, SiriusXM radio, Bluetooth, and USB inputs as standard kit, while a Bose seven-speaker stereo is optional.

Have you driven a 2021 Buick Encore?
Rank This Car

Enter your zip to see incentives for a new Encore in your area.