Looking for a New Audi Q5 in your area? 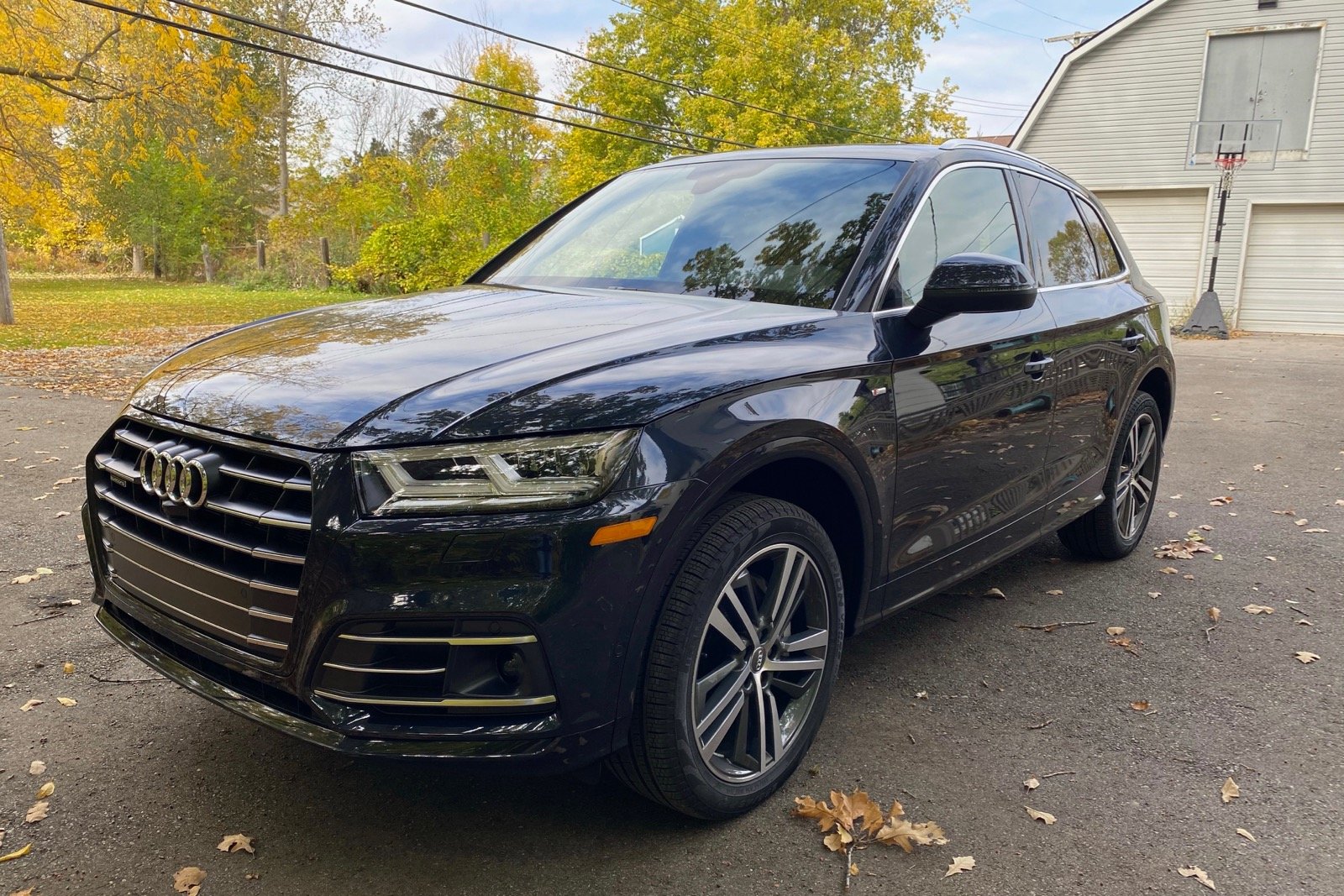 Audi has made a commitment to electrification across its lineup. That takes the form of all-electric (BEV), hybrid (HEV), and plug-in hybrid vehicles (PHEV). The Q5, which entered its second generation in the 2018 model year, has offered a PHEV powertrain since 2020 in the Audi Q5 55 TFSI e quattro. 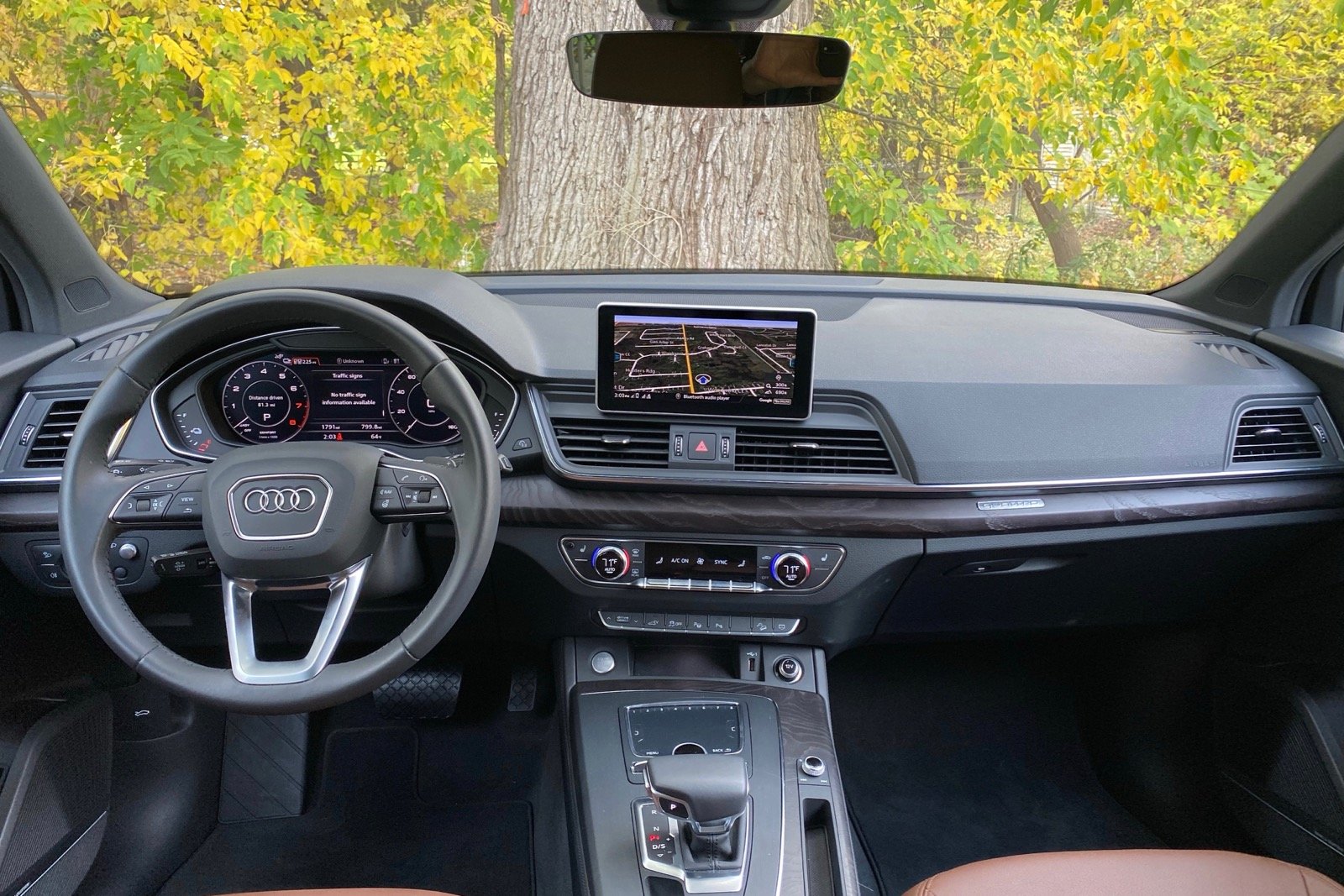 The Q5 is a sharp-looking crossover SUV that carries the Audi design language well, while still maintaining its individual character within the lineup. It has an expressive face, with LED headlights squinting out beside the big Audi Singleframe grille, all sporting horizontal elements that emphasize width. The body features crisp character lines, and the greenhouse is like a protective shell. The rear features bold, large taillights. Overall, the Audi Q5 has a very classy, modern, appearance from stem to stern with exceptional fit and finish everywhere you look. The plug-in Q5 wears some S-Line trim pieces and enhancements to set it apart from the gasoline-only Q5, and looks even better, including standard 19-inch wheels or optional 20-inch wheels.

Inside, things are similarly classy and modern. While the Q5 is packed with technology, it maintains an uncluttered appearance. Buttons, switches, and knobs are smartly grouped and segregated by function, and there’s a unity of design that is very pleasing. Material selection is at a high level, and where disparate materials meet, the lines are crisp and well-defined. There’s a real authenticity to the materials, with real wood, real metal, and honed surfaces. The 10.1-inch touchscreen floats at the top of the center stack, just where it should be to be in the driver’s line of sight. The second row is also nicely appointed, with standard leather seating surfaces throughout. 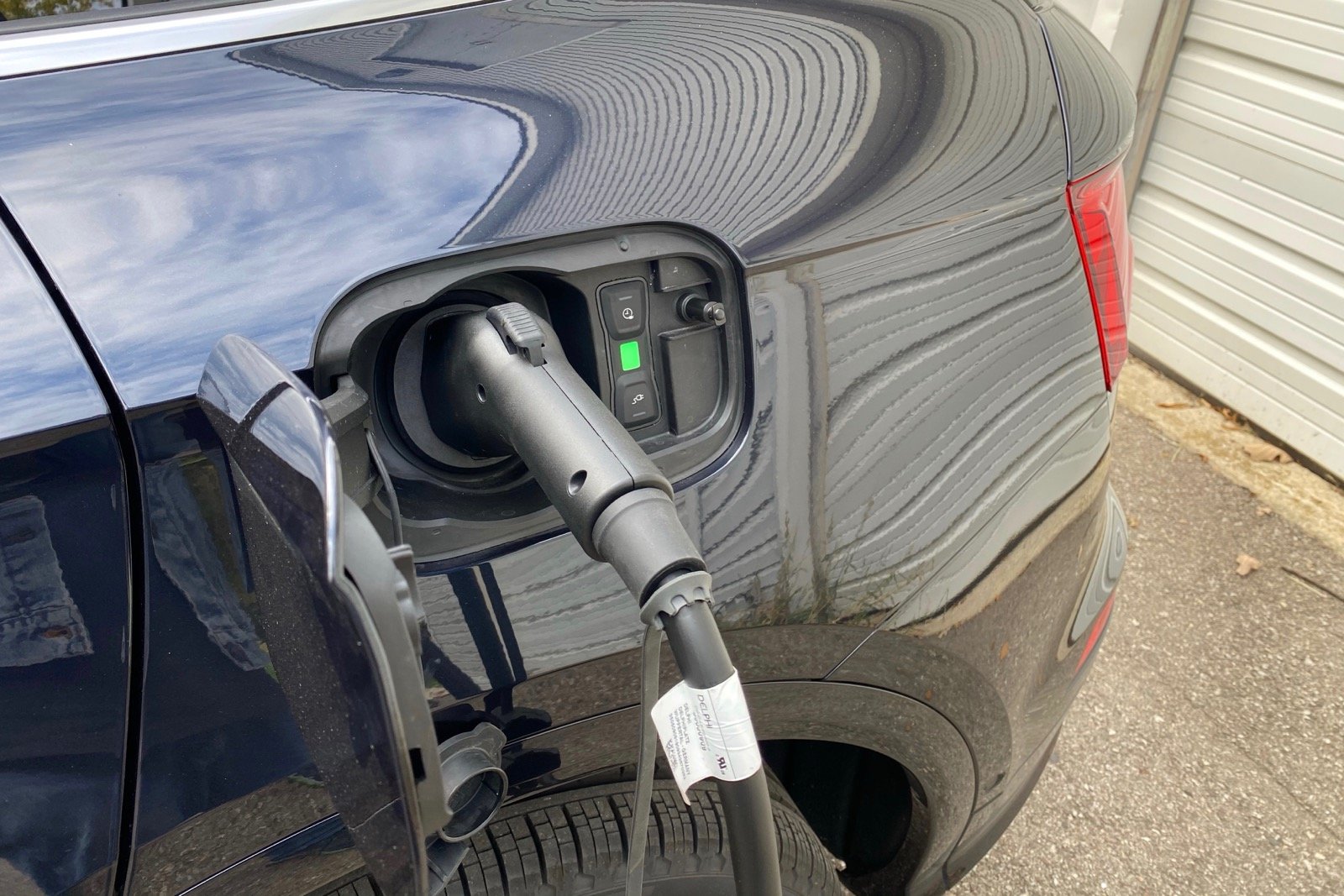 The Q5 PHEV takes a good thing and makes it better. The Q5 is already a fun crossover to drive in its standard gasoline-only form (badged as Q5 45); adding an additional 114 horsepower and 96 pound-feet of torque with a 14.1-kWh battery makes it genuine adult entertainment. The total combined output for the PHEV is 362 hp and 373 lb-ft of torque, a good match with the crossover’s 4,665-lb curb weight. An electric motor works with the 2.0-liter turbocharged inline four-cylinder gasoline engine in a boost function and then provides backup to the gas engine during coasting and low-demand situations. It’s an innovative setup that delivers convincing acceleration when needed (0 – 60 mph in 5.0 seconds, per Audi), and contributes to impressive fuel-economy figures of 65 MPGe combined. In gasoline-only mode, the Q5 PHEV is rated at 27 mpg combined. The Q5 PHEV’s battery pack can be recharged overnight with household current (Level 1, 120-volts) or in 2.4 hours with Level 2, 240-volt, service.

The Q5 PHEV uses a seven-speed S Tronic automatic transmission with full-time Quattro all-wheel drive, and can be switched into modes to drive for a limited range on available battery power only (up to 20 miles depending on the state of charge); to reserve battery power for later electric driving; or to automatically drive in hybrid mode, boosting with battery power or using only battery power when most efficient and effective. As a driver, you might choose to reserve your battery power if you want to drive those last few blocks home as quietly as possible or to complete your commute to work through the most congested downtown streets in the most efficient manner. So, having control over these modes is a benefit.

Q5 uses speed-sensitive electromechanical power steering and has a wider-than-expected turning radius of 38.4 feet. This can come as a surprise during a first drive if you attempt perpendicular parking maneuvers (as you should), but quickly becomes a non-issue with familiarity. Four-wheel independent suspension is standard, with five-link setups front and rear. Handling is good, with a slightly stiff, sporty setting that balances comfort with road feel. Body roll is minimal and controlled, and braking is powerful and predictable. 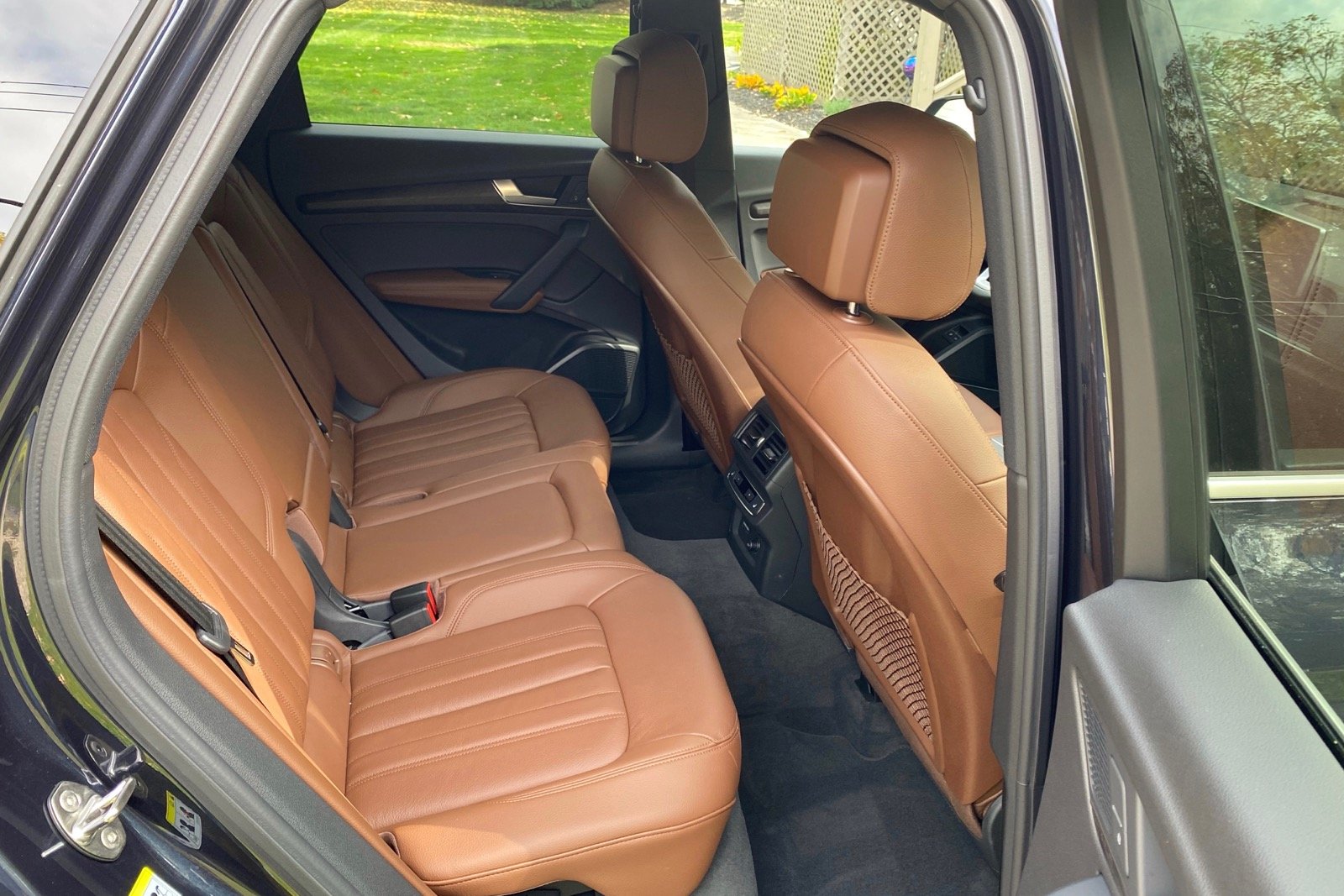 There’s a reason compact crossover SUVs like the Q5 have exploded in popularity over the past few years—it’s the Goldilocks Phenomenon. Not too big, not too small, but just right. Thanks to smart packaging, the Q5 PHEV manages to carry its battery pack under the luggage compartment floor, so it doesn’t eat up cargo space. There are 25.1 cubic feet of space behind the second row. Fold down the second row, and you can haul up to 53.1 cubic feet of cargo behind the first row.

There’s a reasonable amount of legroom in the second row (37.8 inches) and plenty of headroom (37.7 inches) and shoulder room (56.5 inches). Two adults can sit comfortably behind adults in the first row, and a third adult can squeeze in for shorter rides when absolutely necessary. The driver and front-seat passenger are treated to a pair of Audi’s super-comfortable and supportive seats with a wide range of adjustment, heating, and, on the Prestige trim, ventilation.

The front row gets a pair of cupholders, and several cubbies and nooks for phones, change, chargers, and junk. The center-console armrest lifts to reveal a small storage bin. Reflective of its uncluttered design, everything inside functions well and has been laid out smartly. 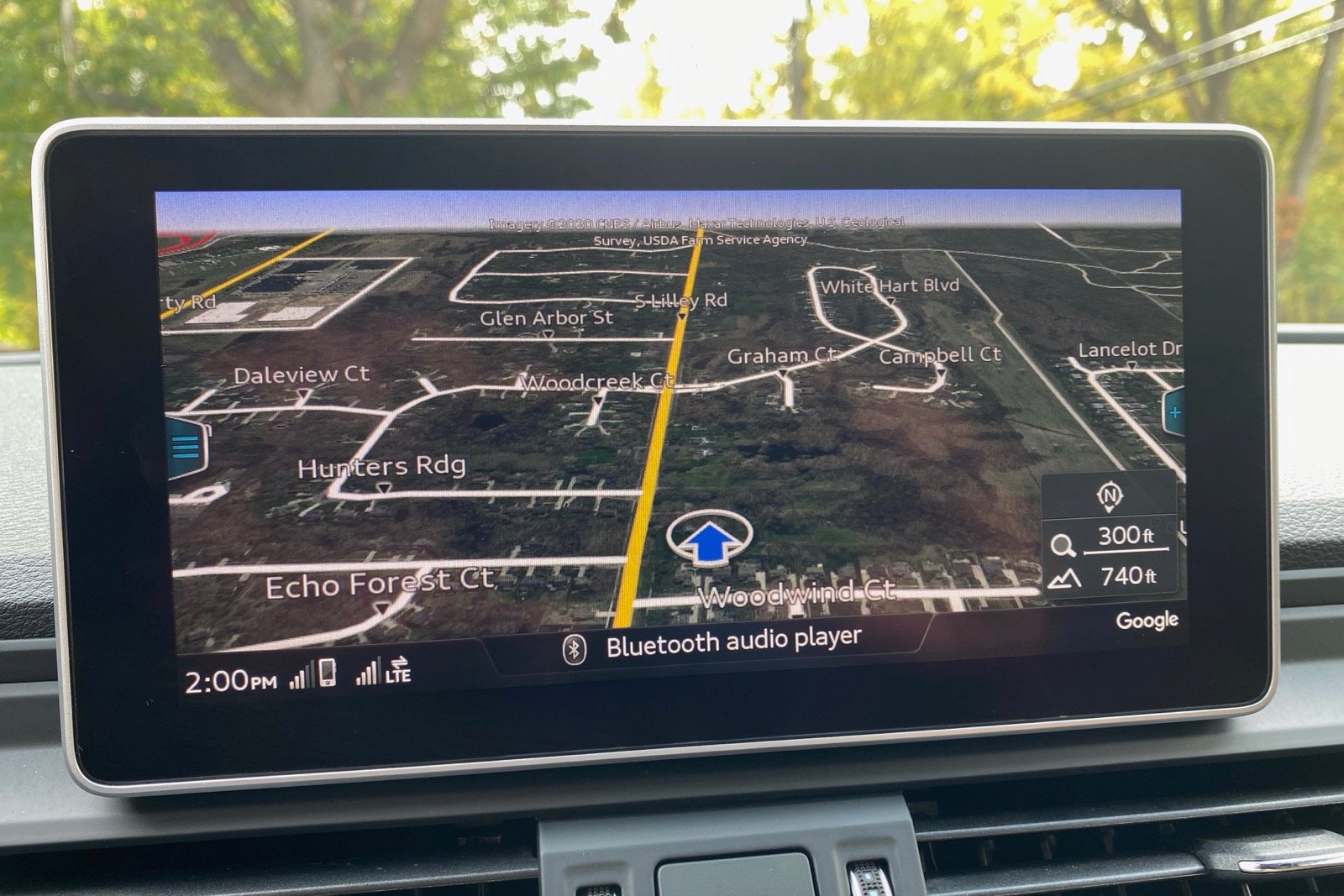 Q5 PHEV gets Audi’s latest MMI 10.1-inch touchscreen infotainment system, and as always, it’s impressive. The new center-console touchpad is easy to use and master. The Audi Virtual Cockpit Plus 12.3-inch HD instrument cluster offers three views: classic, sport, and dynamic. It’s a clear, good-looking, and customizable instrument panel that elevates the cabin to another level of futuristic tech. Combine this with the color/mood-adjustable LED ambient interior cabin lights, and Q5 achieves an impressive level of customization.

Choose the Prestige Package, and the Navigation Package is included. Navigation is available as an option on the Premium Plus trim level, and not available on the base model. When you operate in hybrid mode in a navigation-equipped Q5 PHEV with route guidance, the navigation system, and hybrid system work together to optimize fuel consumption and battery usage based on data points about speed limits, types of roads, and other available information about your route.

A new feature, the Integrated Toll Module (ITM) is standard on all Q5 models. It is a built-in transponder that’s compatible with most toll road services in the United States—a great upgrade from the lumpy transponders that Velcro to your windshield.

A great-sounding Bang & Olufsen 3D audio system with 19 speakers and a 16-channel/755-watt amplifier is available ($950) on Premium Plus models and standard on the Prestige trim level. Wireless Apple CarPlay is included and works like a charm. 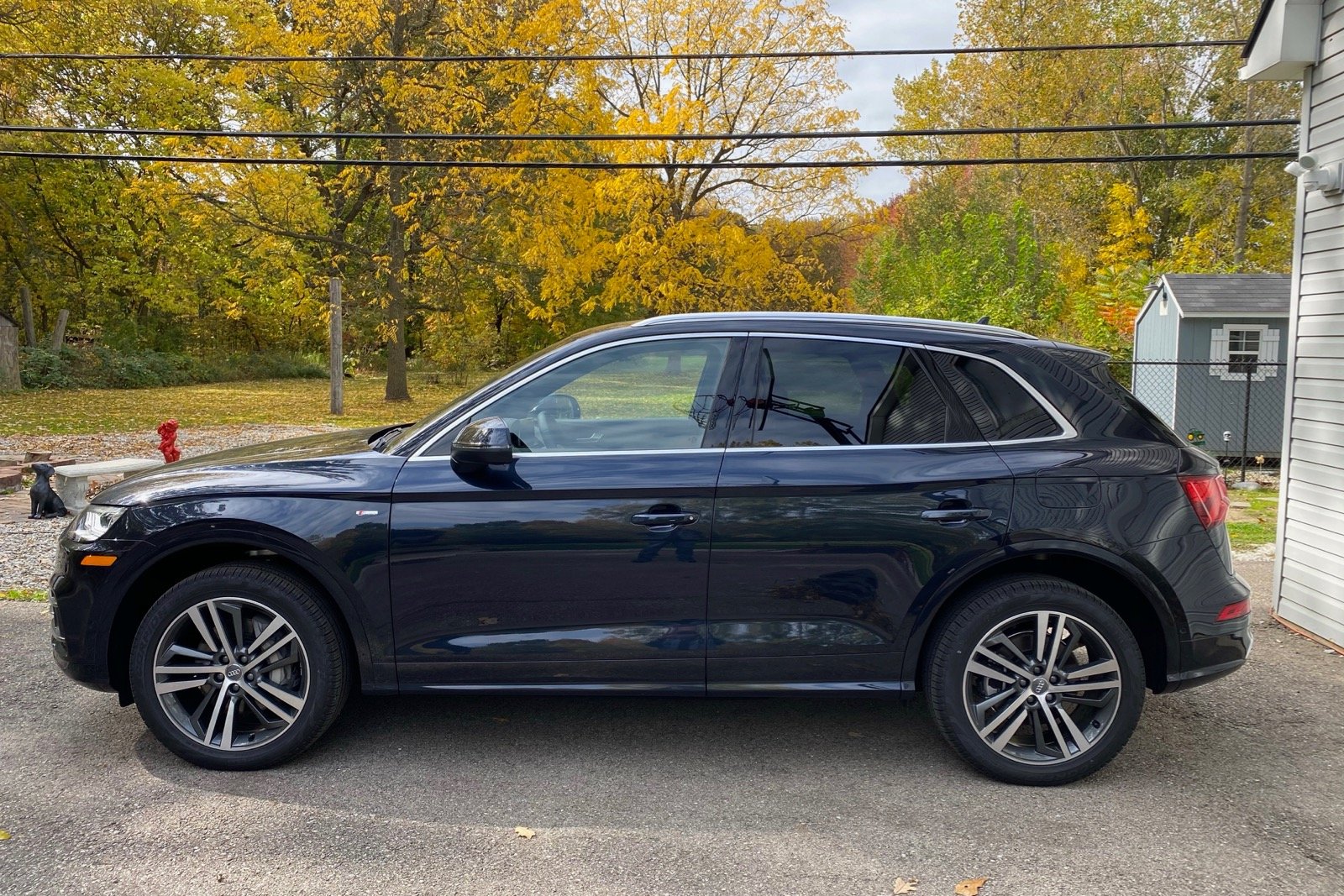 The 2021 Q5 PHEV hasn’t been rated by the Insurance Institute for Highway Safety (IIHS) yet, but the 2020 Q5 (gasoline-only) received top “good” ratings in every category except headlights, where it received a “marginal” rating. The National Highway Traffic Safety Administration (NHTSA) awarded the 2021 Audi Q5 gasoline model five stars but has not yet rated the PHEV. We expect the PHEV ratings to match the gasoline-only ratings when they finally appear. 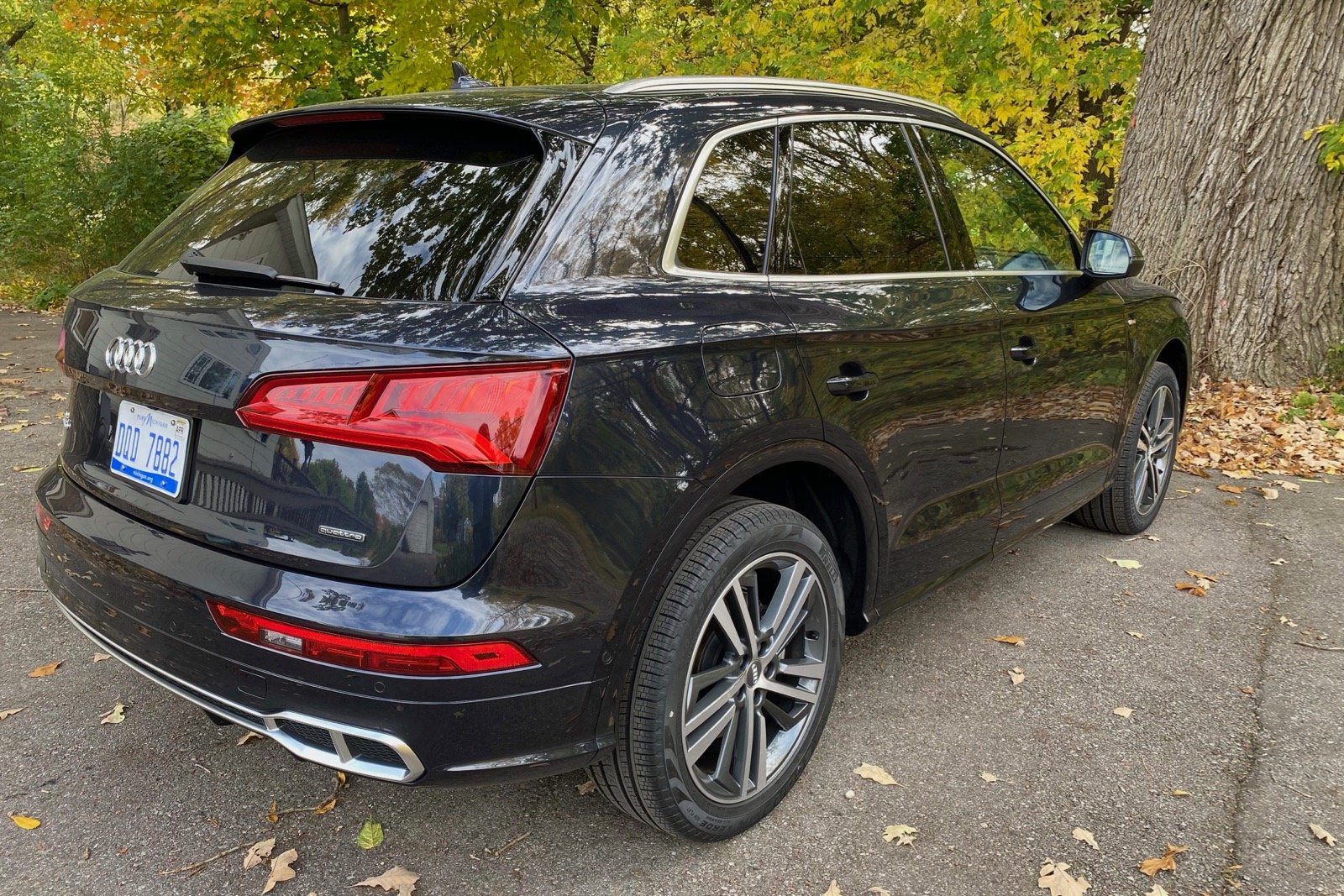 The 2021 Audi Q5 55 TFSI e quattro is available in three trim levels: Premium (starting at $51,900); Premium Plus (starting at $55,800); and Prestige (starting at $61,700). Our test vehicle came with the Prestige Package, along with several options: a cold-weather package with heated steering wheel and rear seats and all-weather floor mats ($800), a 20-inch wheel package that included all-season run-flat tires ($800), rear-side airbags ($350), and a $995 destination fee, for an as-tested MSRP of $63,890. The plug-in hybrid model adds about $7,700 to the price of a gasoline-only Q5 45 TFSI. There are still some federal tax credits available for the Q5 PHEV (up to $6,712), and there may be state credits available in your home state, too. California buyers will also qualify for Clean Air Vehicle stickers, allowing them to use HOV lanes with a single occupant.

It’s tough to find direct competitors in the PHEV five-seat luxury SUV class. The Volvo XC60 T8 Recharge (starting at $53,500) is probably the nearest current model that matches up closely with the Q5 PHEV. The Lincoln Aviator Grand Touring PHEV (starting at $69,740) is a larger vehicle capable of seating seven but is worth measuring against the Q5. The Porsche Cayenne Turbo S E-Hybrid (starting at $164,550) comes from the same parent company (Volkswagen Group) as the Q5 but is obviously in another class. The Mitsubishi Outlander PHEV starts at $36,295 but is also in a different class. We expect the competition to ramp up as more PHEV models enter production in 2021.

The Audi Q5 55 TFSI e quattro has a lot going for it. With impressive MPGe figures, fun driving experience, and overall quality look and feel, it’s a compelling vehicle – and the plug-in part of the package is the icing on the cake.

Enter your zip to see incentives for a new Q5 in your area.

How Do I Bring Up Know The Real Deal On Your Site?