If you’re looking for a reliable truck, a 2020 Toyota Tundra is practically a guarantee that you'll never need to buy another one ever again. But that’s one of the Tundra’s sole virtues. 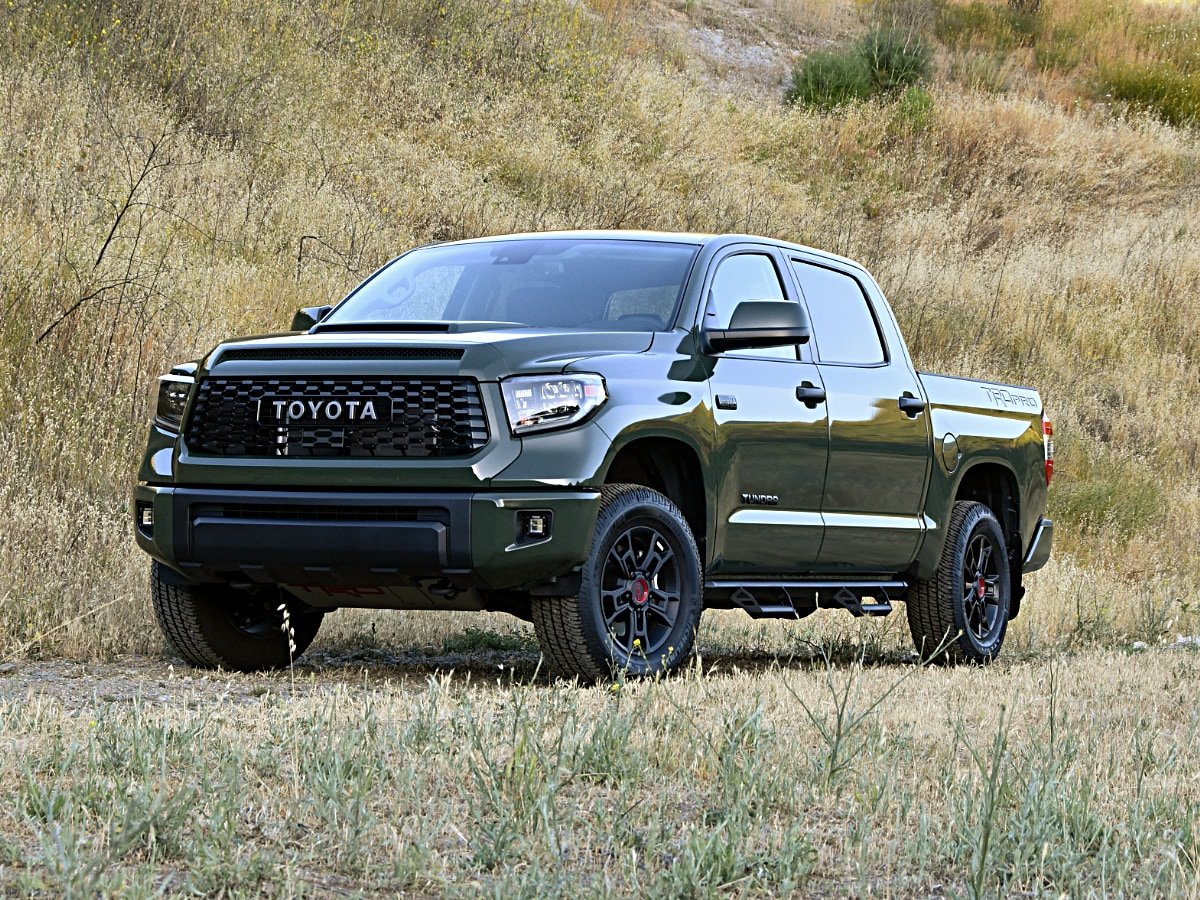 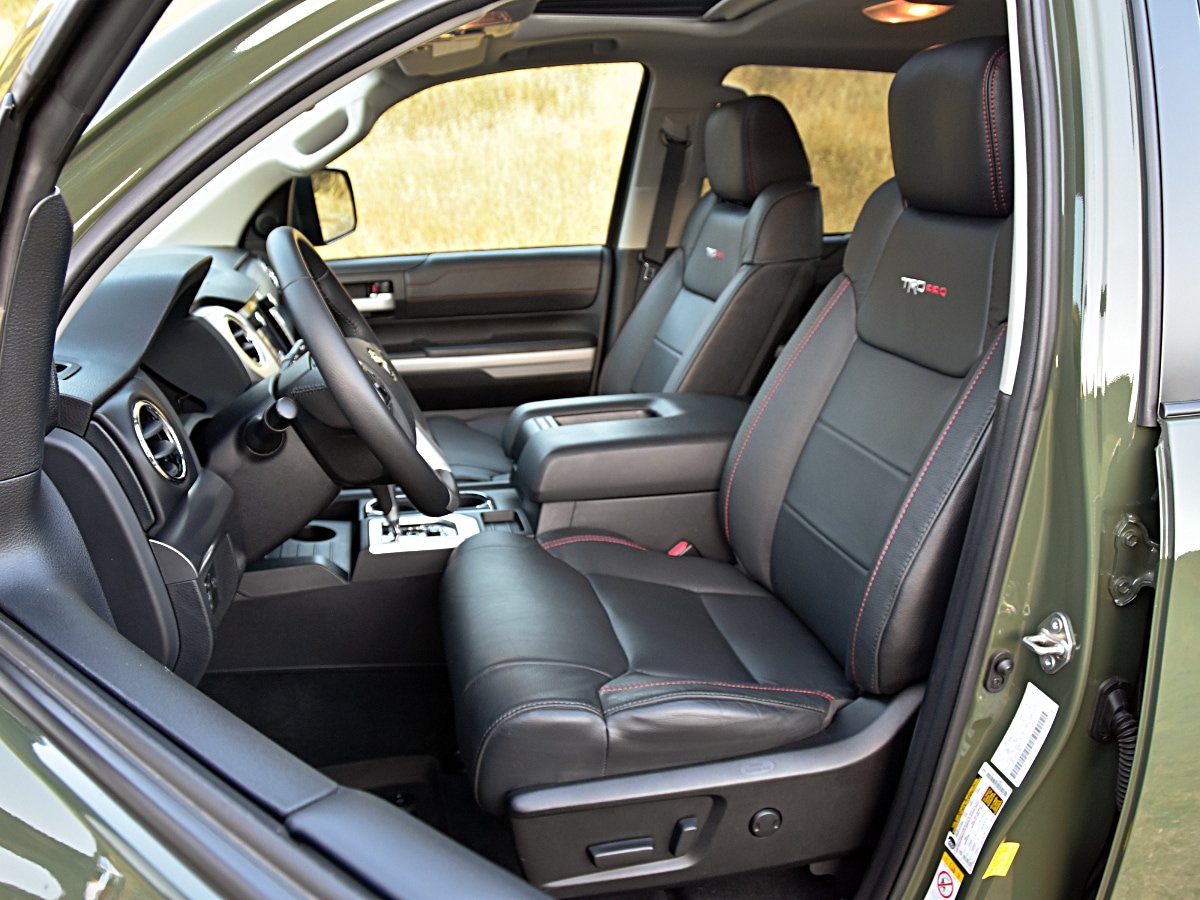 Toyota sells the 2020 Tundra in SR, SR5, Limited, TRD Pro, Platinum, and 1794 Edition trim. The higher you climb on this trim-level ladder, the fancier and plusher a Tundra gets. Cab styles include Double Cab (extended cab) and CrewMax (crew cab), and depending on the cab and trim, one of three bed lengths is available. Prices start at $33,425 and rise to $52,930 before adding the destination charge or any options.

My test truck was the most expensive version, a Tundra TRD Pro CrewMax with 4-wheel drive (4WD). Painted in a new, exclusive Army Green color, and equipped with black 18-inch forged aluminum wheels, the Tundra TRD Pro takes on a tough, technical, military-grade appearance. However, I’d bet the green will quickly wear out its welcome, making you wish you’d chosen black, white, or gray, which are the only other colors available for the good-looking TRD Pro.

Inside, the TRD Pro comes only with black leather that has red stitching and red “TRD Pro” embroidery. The Tundra’s interior has aged well from a design standpoint but it's covered in industrial-grade plastic that is hard to accept at higher price levels. 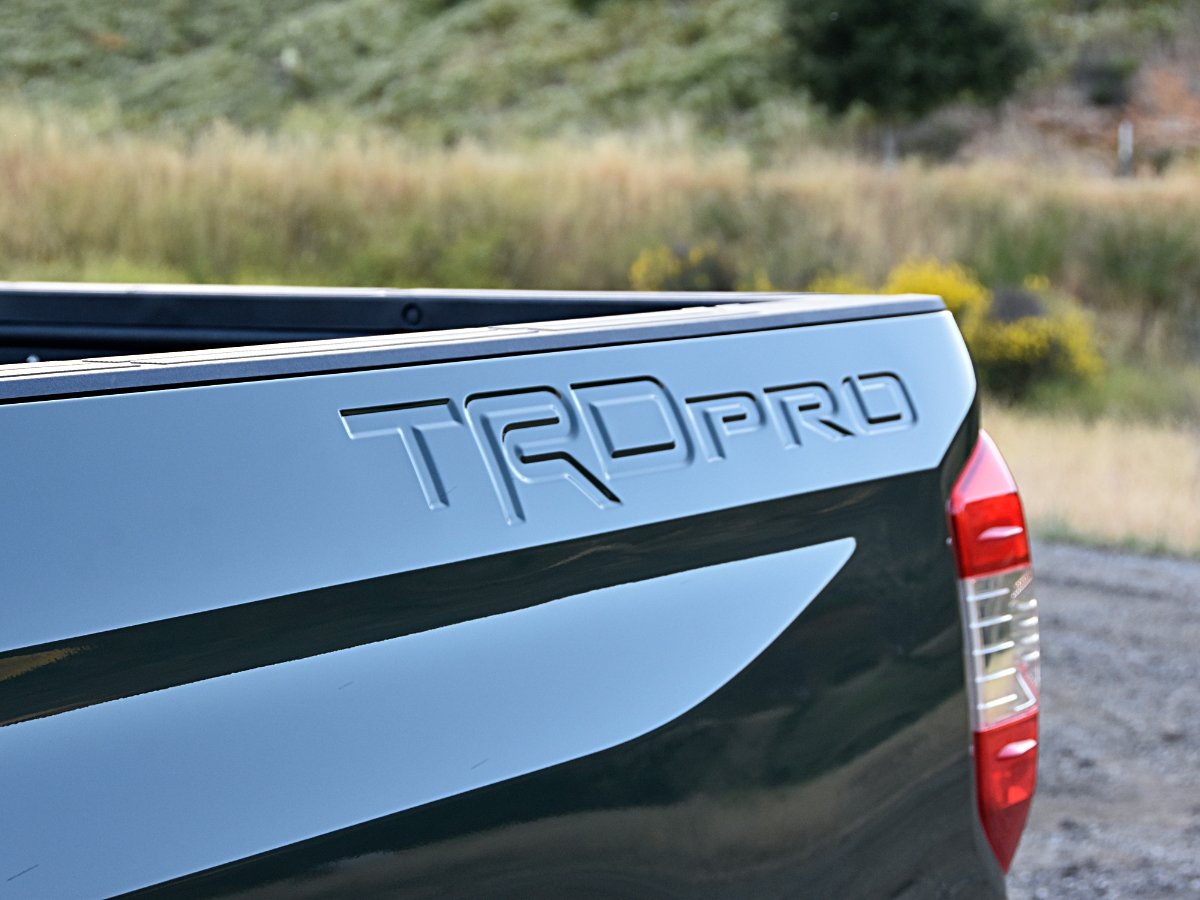 All 2020 Toyota Tundras have a 5.7-liter V8 engine and a 6-speed automatic transmission. A refined and durable workhorse, this powertrain makes 381 horsepower at 5,600 rpm and 401 pound-feet of torque at 3,600 rpm. Maximum towing capacity is 10,200 pounds and you can carry up to 1,730 lbs. of payload, but that’s if you buy the SR Double Cab with rear-wheel drive (RWD). Ratings fall from there.

An electronic shift-on-the-fly 4WD system is optional on all but the TRD Pro, which includes it as standard equipment. This makes sense since the TRD Pro is Toyota’s off-roading model. Additionally, the TRD Pro has BBS forged aluminum wheels, heavy-duty Fox off-road shocks tuned by Toyota Racing Development (TRD), a stainless-steel TRD-tuned dual exhaust system, and an aluminum skid plate to protect the truck’s underthings.

With this exhaust system, the V8 sounds sensational, but it is loud and certain to aggravate bystanders who have trouble appreciating such things. Power is robust, and the transmission is flawless. I had no complaints about the steering or the brakes, either, though I expected the Tundra to drive like a truck and not a car. The turning radius is remarkably tight, making U-turns easier than expected.

I did not tow or haul anything with this truck, and off-roading was limited to a short but rather technical trail. The TRD Pro handled the terrain with grace, but its size became a liability, especially given how rapidly the Southern California brush on either side of the trail was transforming from its glorious, lush, springtime green into crispy, brown, wildfire-fueling tinder.

Predictably, gas mileage is unimpressive. The EPA says a Tundra 4WD gets 13 mpg in the city, 17 on the highway, and 14 in combined driving. I averaged 14.3 mpg during a week of driving devoid of towing and hauling. Good thing a 38-gallon fuel tank is standard. 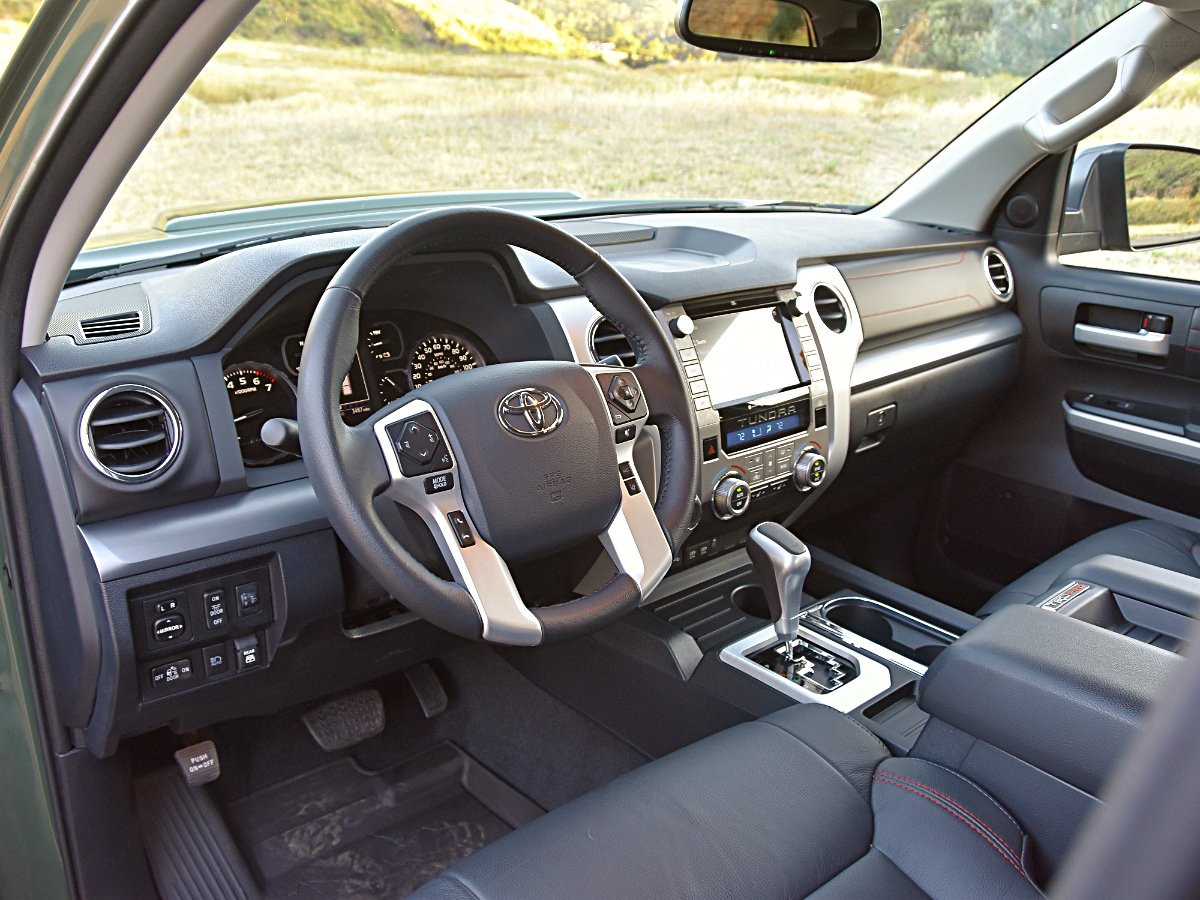 Toyota builds the Tundra in Texas, and the truck’s interior is sized like that state. My 9-year-old climbed aboard, and promptly declared: “This truck is huge! I can’t even touch your seat with my feet!” Parents, take note. Oh, and both kids deemed the power rear window, which lowers the entire pane of glass to store behind the cab, to be quite cool.

Indeed, the Tundra CrewMax’s rear seating area is Texas-sized, and the truck’s San Antonio origin could also explain why the rear bench is rather low and flat. Up front, the leather-bound chairs are huge, supportive, and comfortable for longer drives.

Storage is everywhere unless you look in the glove compartment, which is unexpectedly small for such a big vehicle. Similarly, the backseat offers few practical spots in which to stash stuff. The rear seat cushions flip up to make extra floor space for storage, but there isn’t much available underneath them.

Aside from the optional spray-in bedliner, a handful of tie-down hooks, and bed rails to which you can fasten more tie-down hooks and other accessories, the Tundra’s bed is basic. Don’t look at this Toyota for anything like locking storage wells (Ram) or step ladders that deploy from the tailgate (Ford) or a tailgate with more functionality than a Transformer (GMC).

But then, this lack of such frippery simply underscores what a Toyota Tundra is all about: simplicity. 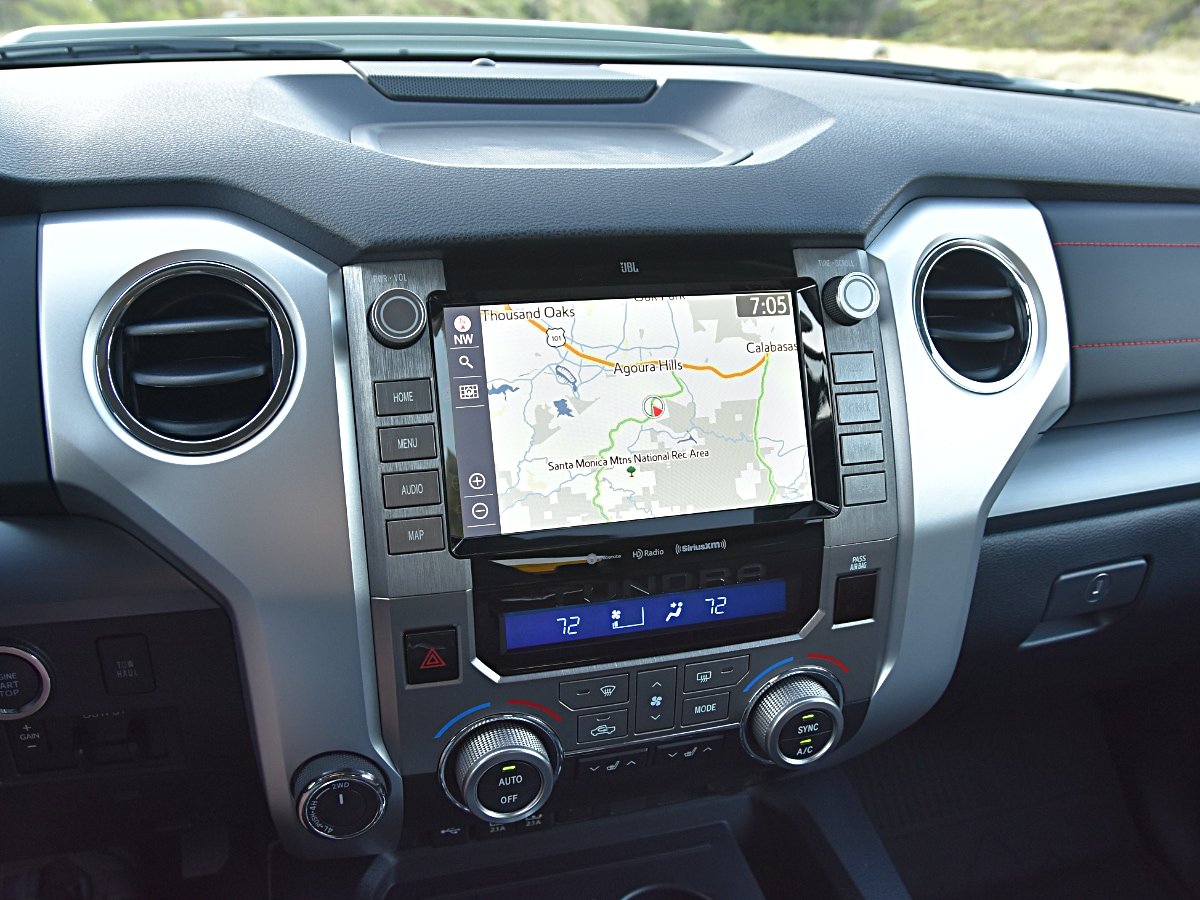 Sitting amidst seeming acres of hard plastic, the Tundra’s recessed, glare-prone infotainment system looks like an antique. But the software behind it is actually up to date.

A 7-inch display is standard in lower trim levels, while more expensive versions of the truck upgrade to an 8-inch screen. They all include Bluetooth connectivity, Apple CarPlay, Android Auto, Amazon Alexa, satellite radio, USB media and charging ports, and free trial subscriptions to safety-related and WiFi connected services. See? It looks like a relic, but it has all the modern conveniences.

If you like bass, you’ll like the JBL speakers. Boom, boom, boom. It’s helpful that Toyota includes stereo knobs and main menu shortcut buttons on either side of the display, but the system does use virtual buttons on the screen for radio station pre-sets. In a truck, stabbing a finger at small touchscreen buttons threatens your sanity.

If you’re wondering if Toyota offers any of the cool towing technology you can get in most competitors, the answer is no. Unless you’re counting the reversing camera. 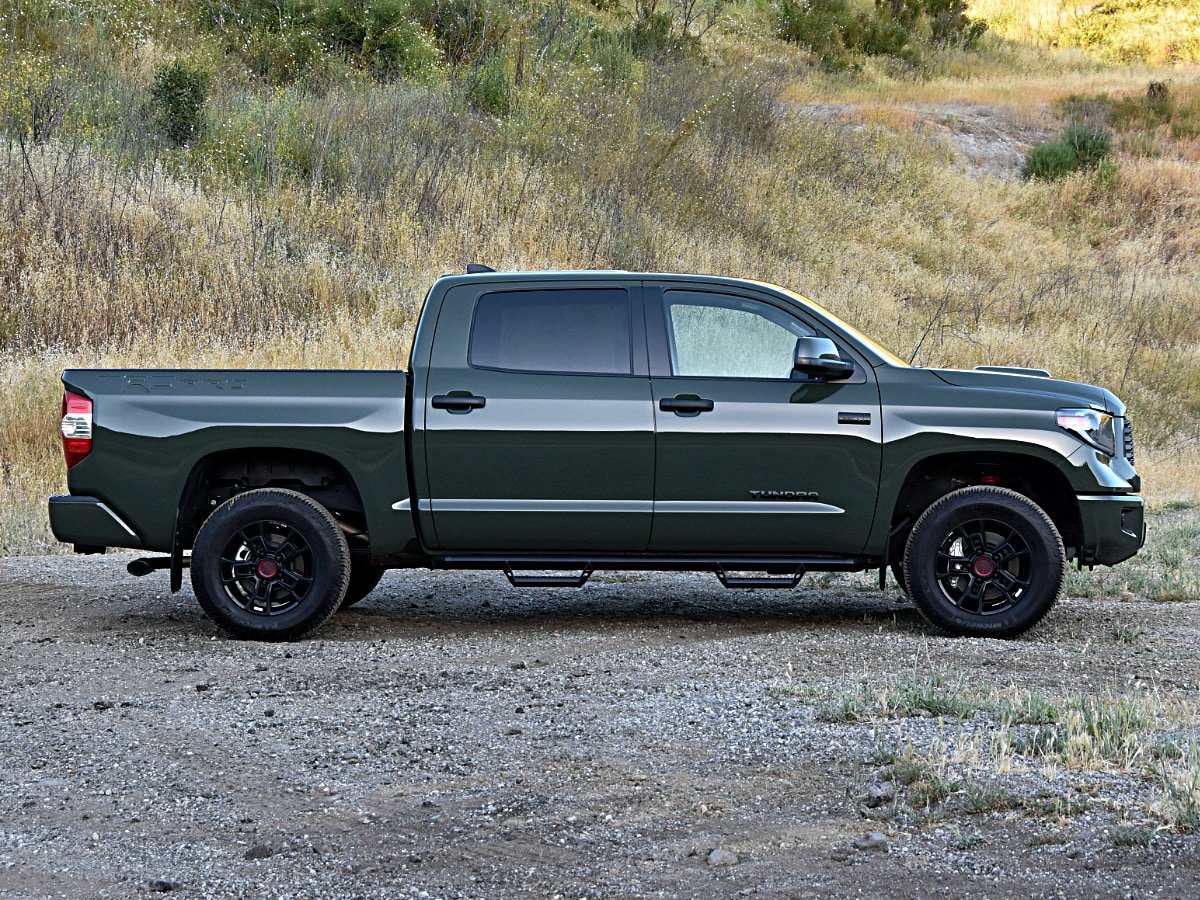 Safety is not a Tundra strong point. The problem has nothing to do with technology, because Toyota Safety Sense comes standard and you can also get a blind-spot monitoring system with rear cross-traffic alert. Plus, every Tundra includes a free year of Safety Connect services, which provides automatic collision notification, SOS emergency calling, and other useful features.

Rather, the issue is with the Tundra’s crash-test performance.

According to the Insurance Institute for Highway Safety (IIHS), the 2020 Tundra CrewMax gets Good ratings only in those tests that were the most revealing back when Rodney Atkins was at the top of the Billboard country charts with “Watching You.”

Standards have since strengthened, and in small-overlap, frontal-impact testing the Tundra is no bueno. It gets a Marginal rating for the driver and a Poor rating for the front passenger. The truck’s headlights are rated Marginal, too.

Granted, these crashworthiness ratings apply when the Tundra crashes into a stationary object (telephone pole) or another vehicle roughly the same size as it is. And most other vehicles are smaller and lighter than a Tundra. But if you’re in Texas or any other part of the United States where trucks far outnumber cars, well, chances are that if you’re going to get into a wreck, it’s gonna be with another big pickup.

The ratings from the National Highway Traffic Safety Administration (NHTSA), which haven’t seen a significant strengthening of standards since the 2011 model year, are more favorable toward the Tundra. Side-impact protection rates 5 stars, frontal-impact protection rates 4 stars, and when equipped with 4WD the rollover resistance rating is 4 stars. A Tundra with RWD, however, gets a 3-star rollover resistance rating. 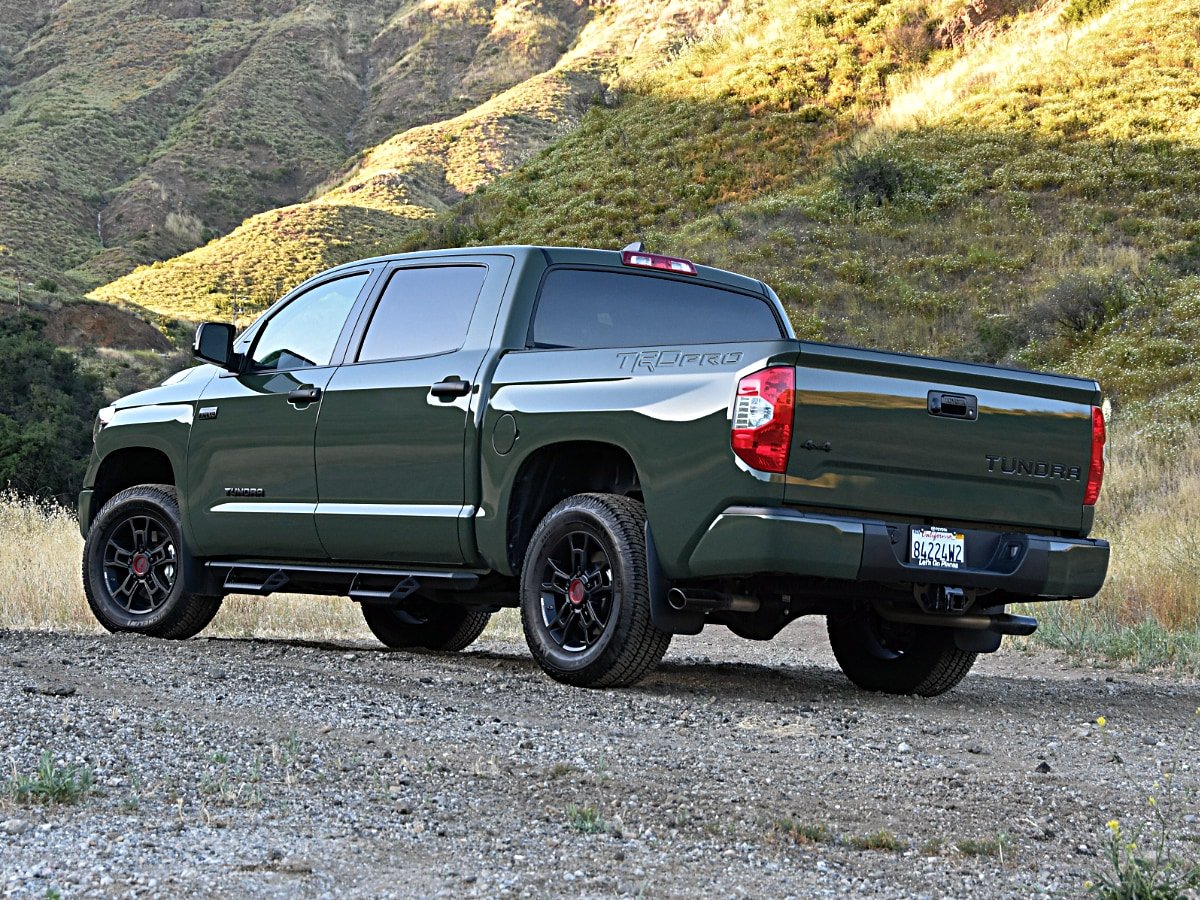 The full-size, half-ton pickup segment is mighty competitive. Brand loyalty runs deep, but big discounts are common, as truck makers battle for new customers while trying to retain existing ones that are thinking of trying something new.

Toyota’s deals are typically more conservative, and the trucks are affordably priced, especially at the higher end of the spectrum. Toyota also provides free scheduled maintenance for 2 years or 25,000 miles, and Tundras are notorious for holding their value over time.

But is a Tundra cost-effective? With dismal fuel economy, uncompetitive towing and payload ratings, and unsatisfactory crash-test ratings, you’ll really need to prioritize reliability, resale value, and appealing window stickers in order to answer that question in the affirmative.

GuruR94Y7 For the Family Truck the Dodge still beat Toyota on the Luxury, Price, and riding comfort: Sorry Toyota, but you windows defrost capacity needs a big upgrade!!

Have you driven a 2020 Toyota Tundra?
Rank This Car

2020 Tundra That Wont Start When Recently Run And Very Hot

Truck usually starts but if it has been running for 50 miles or more, and it is fery hot outside, the next start will just crank but not fire the engine. Usually after several more attempts it star...

10 views with 2 answers (last answer about a month ago)

How Do You Deal With Dealerships Who Put Inaccurate Prices Out To The Publi...