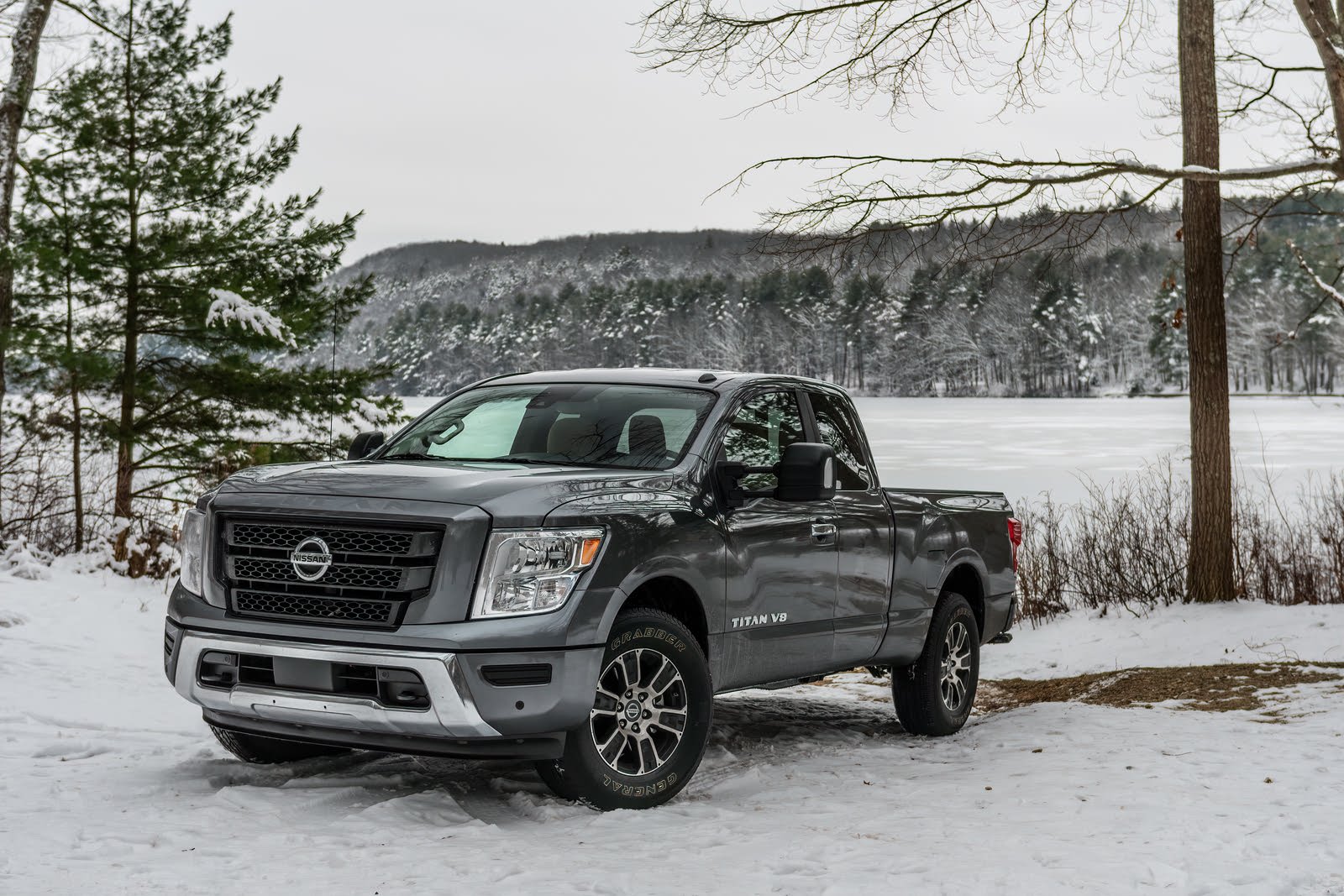 Not many shoppers pick the Titan over a Ford F-150, Chevy Silverado, or Ram 1500. Nissan has redesigned the Titan only once since its 2004 model-year debut, and twice over, it's been mediocre. Just as you might have done, we've ignored the Titan since our last test in 2017. But for 2020, Nissan has responded to our complaints about the Titan with major strides in technology, safety, and overall value—not just among other Titans, but all full-size pickups. We're diving in for a closer look. 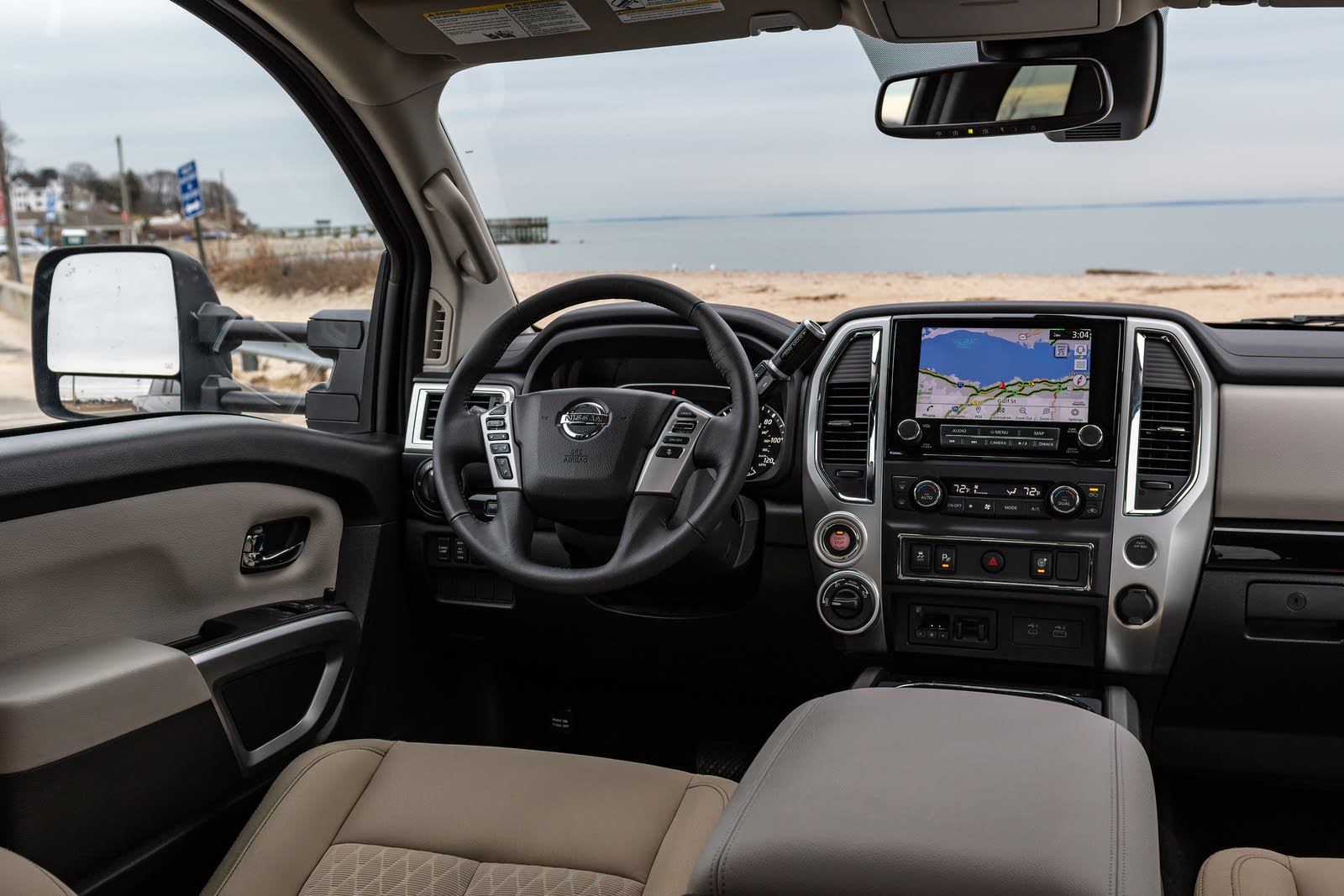 I stand by my assessment from 2017: The Titan is handsomely generic. It's stocky, masculine, and built on solid bones, but as the days and weeks pile on, you get a pervasive, unshakable feeling telling you to move on to something more exciting. When the Ram 1500 brings the interior of a luxury car and the Silverado cuts through traffic like the Trail Boss it is, the Titan just doesn't stand out. I'm a snob for style regardless of a vehicle's type or price, and I'm likely not alone.

For 2020, Nissan added new exterior paints, wheels, and three grille choices with varying colors and patterns depending on whether you choose a lower trim (black with body-color surround), upper trim (all chrome), or the off-road Pro-4X (gray with red accents). New tailgates echo the grille styles, with chrome on the Platinum Reserve and a matte gray for the Pro-4X, both with embossed "T" logos that—because this is a large truck sold to Americans—bear a resemblance to cattle horns. New LED headlights sweep gracefully into the fenders and showcase a dark-tinted housing with shiny accents and hard-edged LED running lamps. Restyled LED taillights—and on the Pro-4X, blacked-out Nissan badges with red lettering and red tow hooks—add some much-needed spice.

My test truck, an SV King Cab 4WD, had none of those styling tweaks. The halogen headlights are boring and dim. Everything was plain and borderline drab, except the interior. Compared to the loaded 2017 Platinum Reserve Crew Cab I last tested, I was way more impressed with this cloth-lined lower trim. Materials are markedly better, particularly on the soft upper dash, door panels, and the leather steering wheel. The cloth seats, with their pretty diamond-stitch patterns, felt remarkably comfortable. Now add a glossy, 9-inch touchscreen and a larger instrument panel display. Then, add a panoramic moonroof. It took a while, but now the Titan—the lower-trim Titan, no less—is showcasing real quality. If I could just order the spiffier lights and tailgate finishers from the higher trims, it'd score higher. 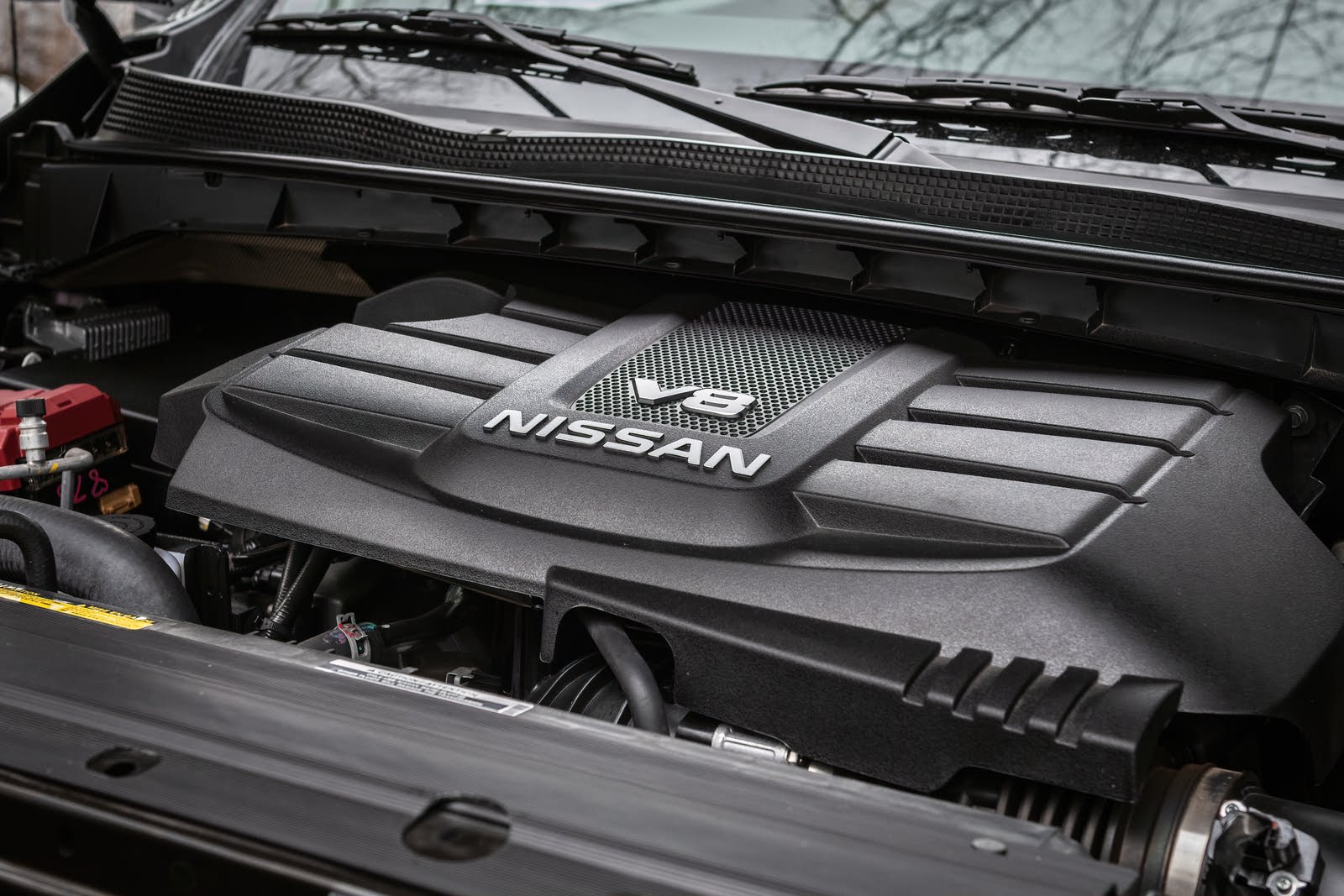 The Titan, like the Toyota Tundra, packs one powerful and delicious-sounding V8 engine that would be an extra-cost option on all the domestic trucks. For 2020, that 5.6-liter V8 puts out 400 horsepower and 413 pound-feet of torque—up 10 hp and 19 lb-ft from 2017—when running on premium gasoline (on 87 octane, you'll lose most of those gains). Combined with a new 9-speed automatic transmission, the Titan flat-out hauls the mail in a straight line and will sign, seal, and deliver you to illicit speeds in no time. The two extra gears and a shorter rear-axle ratio pay dividends in low- and mid-range acceleration, where the old Titan sometimes felt slow to respond. Thank goodness the brakes are equally up to the task of slowing this beast down.

Hauling and towing have improved, too. When equipped with the towing package, the Titan can carry up to a 1,680-pound payload and 9,370 pounds of trailer weight (gains of 60 and 130 pounds, respectively). The towing package adds a tow mode for the transmission, adjustable trailer braking with sway control, and extended side-view mirrors. The steering doesn't feel as connected to the helm as a Ram 1500's, and the ride isn't as buttery smooth, either, but the Titan remains composed on its independent front axle and rear leaf springs. It's quiet, too, with standard double-pane front windows and an acoustic-laminated windshield. EPA ratings are not yet available, although they should improve over the 2019 model's. I averaged 16 mpg over a 500-mile week, without any passengers or loads. That's acceptable in a truck this big. Rear-wheel drive (RWD) comes standard, with 4-wheel drive (4WD) and a low-range transfer case optional on all trims.

The Titan XD has dropped the 5.0-liter Cummins V8 diesel for 2020 (in previous models, it made 310 hp and a very stout 555 lb-ft of torque). Consider the XD a tweener truck between conventional light-duty and heavy-duty models. Nissan reinforces the frame, stretches the wheelbase by a foot, raises the truck 3 inches, and upgrades the suspension, rear axle, and brakes to cope with higher weights. On gasoline, the 2020 XD Crew Cab is down slightly compared to the 2019 model, at 10,880 pounds for towing and 2,450 pounds of payload. Note that previous XD diesels were rated close to 13,000 pounds, but part of that increase had to do with less weight in the cab. For 2020, Nissan has also dropped the single cab from its lineup, making the 2020 XDs heavier on average. Still, these are competitive numbers. 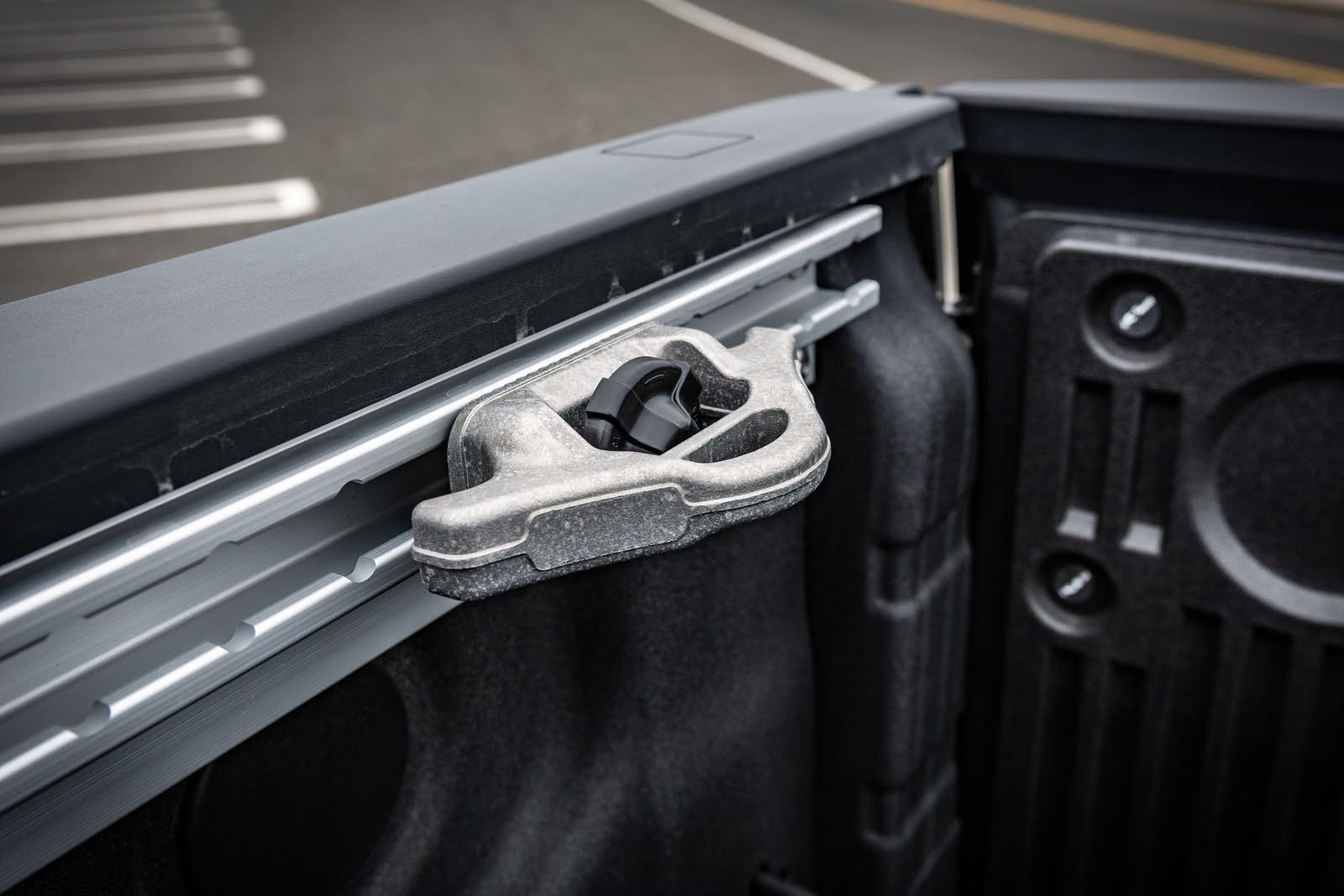 Without the single cab and its longer 8-foot bed, the King Cab with the 6.5-footer is now the starter Titan. The Crew Cab, with its 4 full-size doors, offers a 5.5-foot bed. I found the King Cab's double-hinged rear doors to be extremely useful, as they can either lock at 90 degrees or fold back almost 180 degrees against the body. The pillarless design allows for a completely open area for cargo or people, although without that pillar, rear passengers cannot open these doors without the front doors opening first. Those in the rear will sacrifice legroom without the Crew Cab's extra inches, but in any other measurement, the Titan is a roomy place. Those backseat passengers still get six cupholders, air vents, two power outlets (12-volt and AC 110-volt), and two USB ports. Heated rear seats are also optional.

Nissan's optional cargo organizer on the rear floor is a great idea. It has lockable bins with a hinged top that can fold out to create a flat parcel shelf, eliminating the drivetrain hump entirely. With the rear seats folded up, it's easy to throw tall items in the Titan's cab. The center console also has a new smartphone holder that, like the cupholder tray, can be removed to stow more items underneath. There's a ton of space for all your unnecessary junk, trust me.

Making the most of the Titan's bed requires the Utility package on lower trims like my SV. I'm just as impressed with it now as I was in 2017. The bed has a factory spray-on liner with LED lights under the side panels, four cargo hooks, and a rail system that lets you lock and load four removable cleats to make tie-downs easier. Twist the cleat's dial to remove it, slide it anywhere along either the side rails or the two rails on the bed, twist it to lock, and you're done. A fold-down tailgate step on the left-side rear bumper makes it less stressful to come aboard, and there's also a 400-watt AC outlet on the left side of the bed. While filming the video review, my colleagues had a laptop sitting on the tailgate, plugged in and connected to the truck's onboard WiFi. Nissan also offers two removable storage bins that run the length of the side panels. 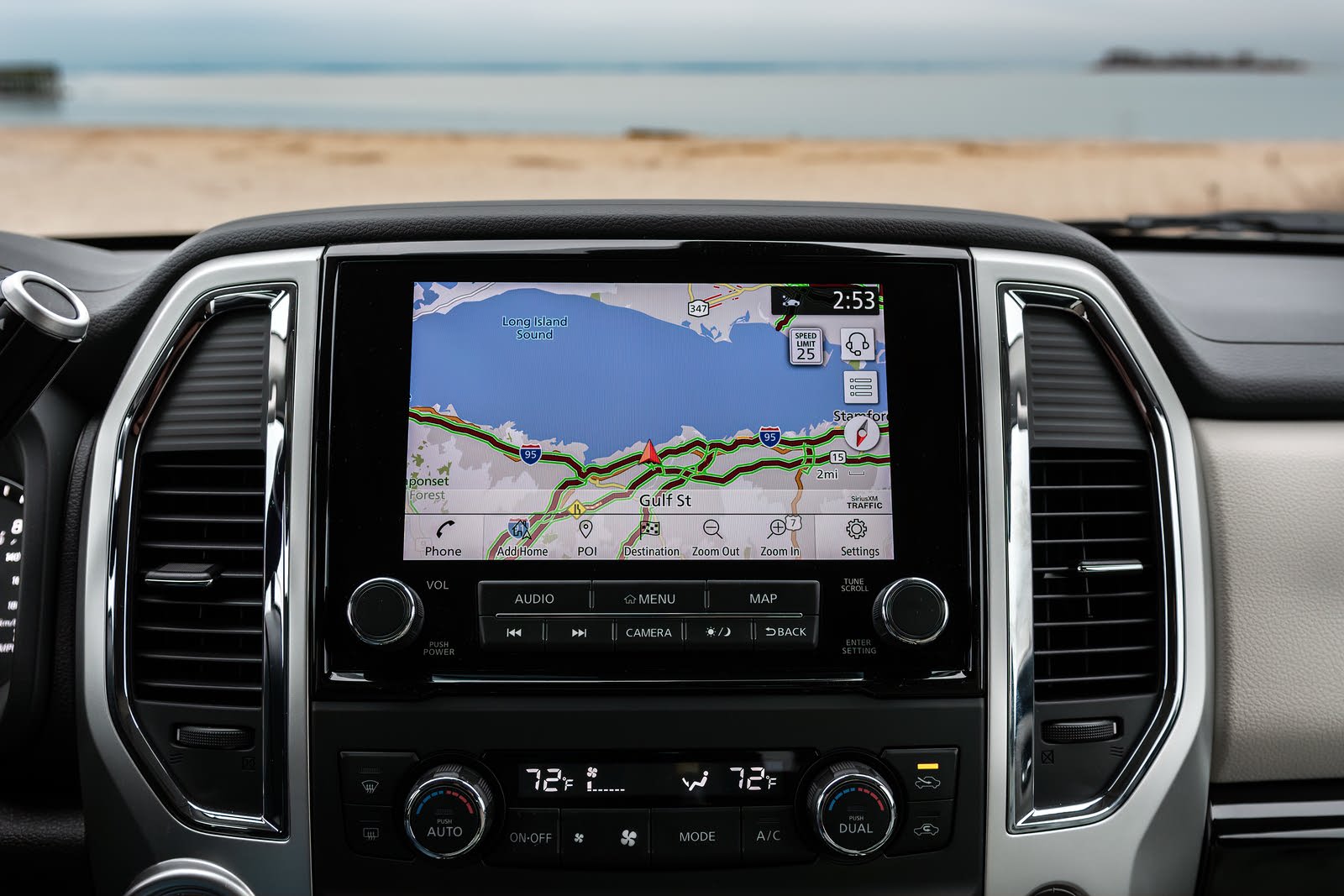 The new Titan's infotainment system offers a night-and-day difference from the old version. A choice of either an 8- or 9-inch touchscreen replaces the ancient-looking, tube TV-style displays of the past. The 9-inch display, which has a sharp, edgeless look like the best computer monitors, is the one to get. It's quicker and much higher in resolution than the old one. Maps can be pinched, custom home-screen menus can be swiped, and the whole system feels modern and intuitive. Both Apple CarPlay and Android Auto come standard with the 9-inch screen. NissanConnect data services bring the usual automatic emergency dialing, stolen vehicle alerts, and remote capabilities to unlock and start the truck (which you can also command via Amazon Alexa, Google Assistant, or a smart watch running the NissanConnect app). Voice searches for points of interest run through Google, and they're quick and accurate. The system will also update itself automatically over the air.

My truck didn't have the 485-watt Fender stereo, which replaces the Rockford Fosgate stereo that used to be the Titan's premium option. It has 10 or 12 speakers depending on the cab, including a subwoofer. The standard stereo is adequate. What's especially nice is having four USB ports, including one USB-C, which is three more than before. The 7-inch color display in the instrument panel is another major plus. It allows the driver to see directions, auxiliary gauges like oil pressure, steering angles, and other detailed info. In the past, the Titan had a tiny square screen. 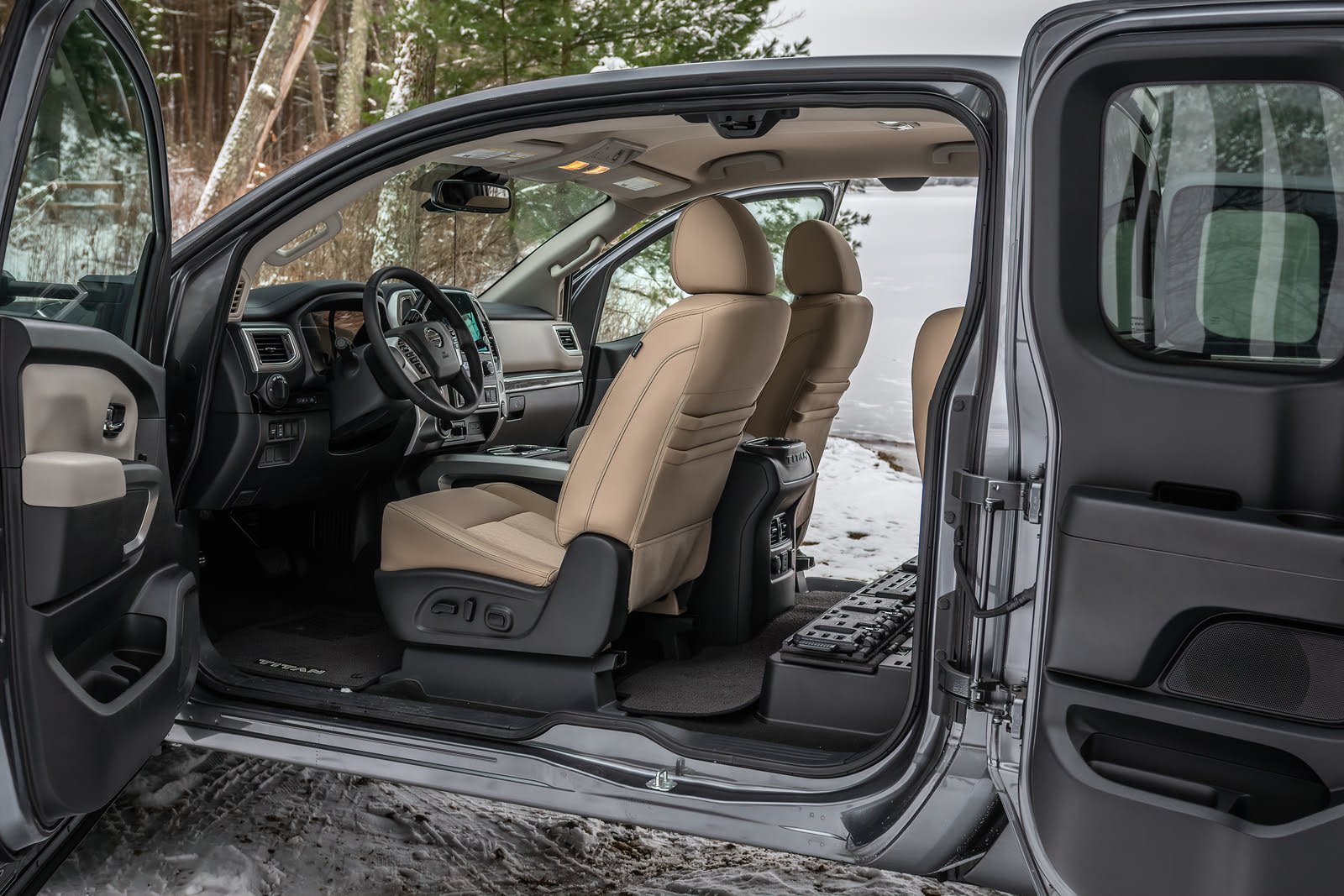 The 2020 Titan has not yet been tested by the National Highway Traffic Safety Administration (NHTSA) or the Insurance Institute for Highway Safety (IIHS). The 2019 Crew Cab scored 4 out of 5 stars, with top rankings for side impact, and 4 out of 5 stars for both front passengers. After scoring poorly on the IIHS front small overlap test in early 2017, months after my initial review, Nissan improved the body structure so that all Titan Crew Cab models scored the top Good rating in all six of the group's crash tests (the King Cab hasn't been subjected to every test, though it rates Good in four tests; King Cabs were not rated by NHTSA).

Considering the improvements in body structure, standard driver assists, two additional airbags, and two more seatbelt pre-tensioners (for the rear), the Titan earns a higher rating from us in this category. Adaptive cruise control, a driver-attention monitor, traffic-sign recognition, and 360-degree cameras are optional. A rear-door alert that warns the driver about leaving things (or people, God forbid) in the backseat comes standard. 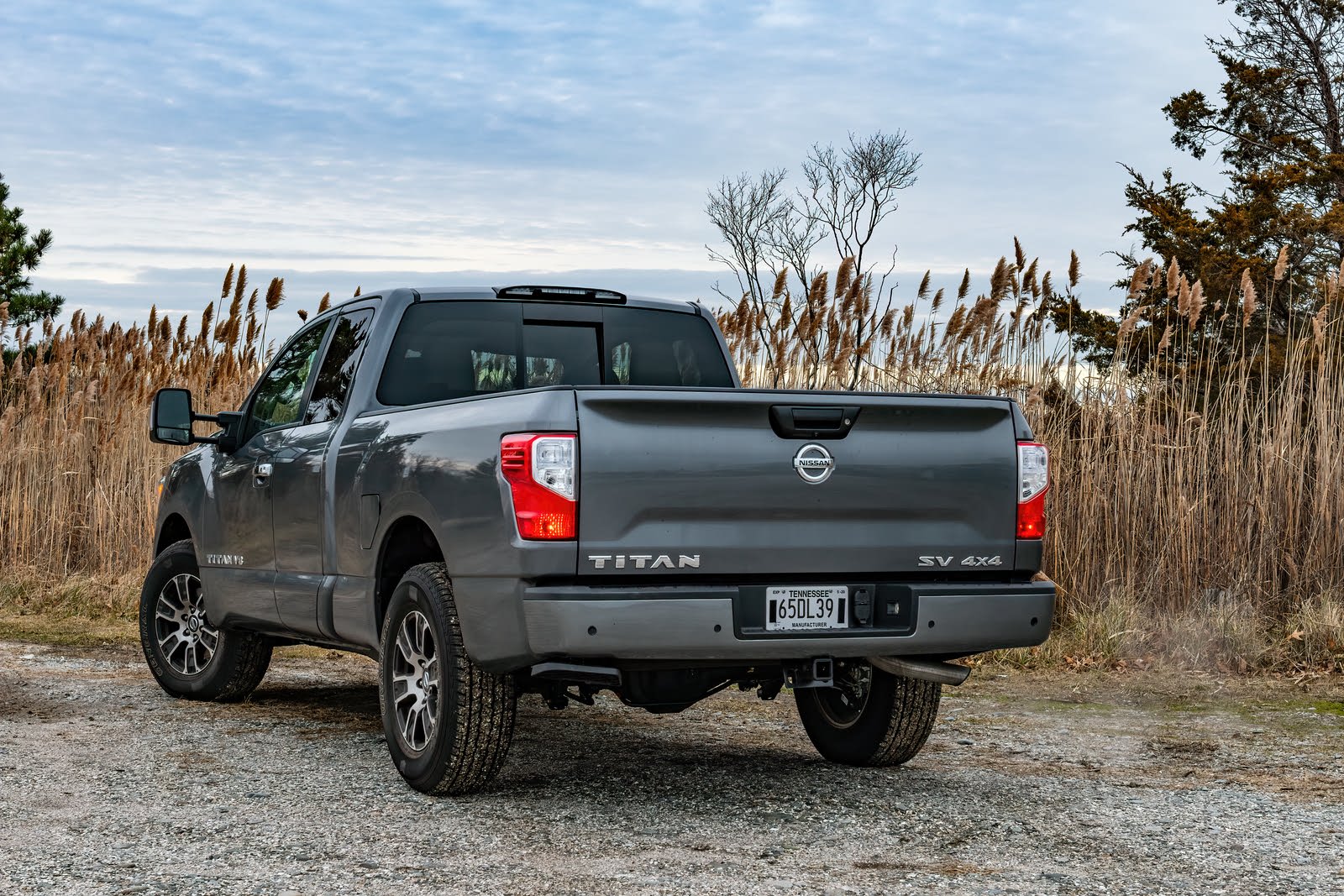 Prices for the 2020 Titan have not yet been released, but they should be comparable to those for 2019 models. In 2019, the S King Cab 2WD started at $33,960, and prices ran up to $57,840 for the Platinum Reserve Crew Cab 4WD like the one I tested in 2017. Our SV King Cab 4WD should sticker for around $47,000 with destination, and it's the one CarGurus recommends you buy. The SV Convenience package adds extra technology and interior amenities, while the Utility package upgrades the bed and also bundles the Tow package. Plus, Nissan throws in a 5-year/100,000-mile warranty that goes way beyond any of its rivals' warranties. The Titan's performance, utility, and safety rank high. But for style and technology, it's still behind the best from Ram, Ford, and Chevy—and those trucks offer many more options for powertrains, trims, and features that accommodate more truck buyers. If a V8 light-duty pickup is all you need, the Titan is now a truck we'd recommend you seriously consider.

Have you driven a 2020 Nissan Titan?
Rank This Car