A standard among luxury cars, the E-Class is a personal reward that lives up to its name. 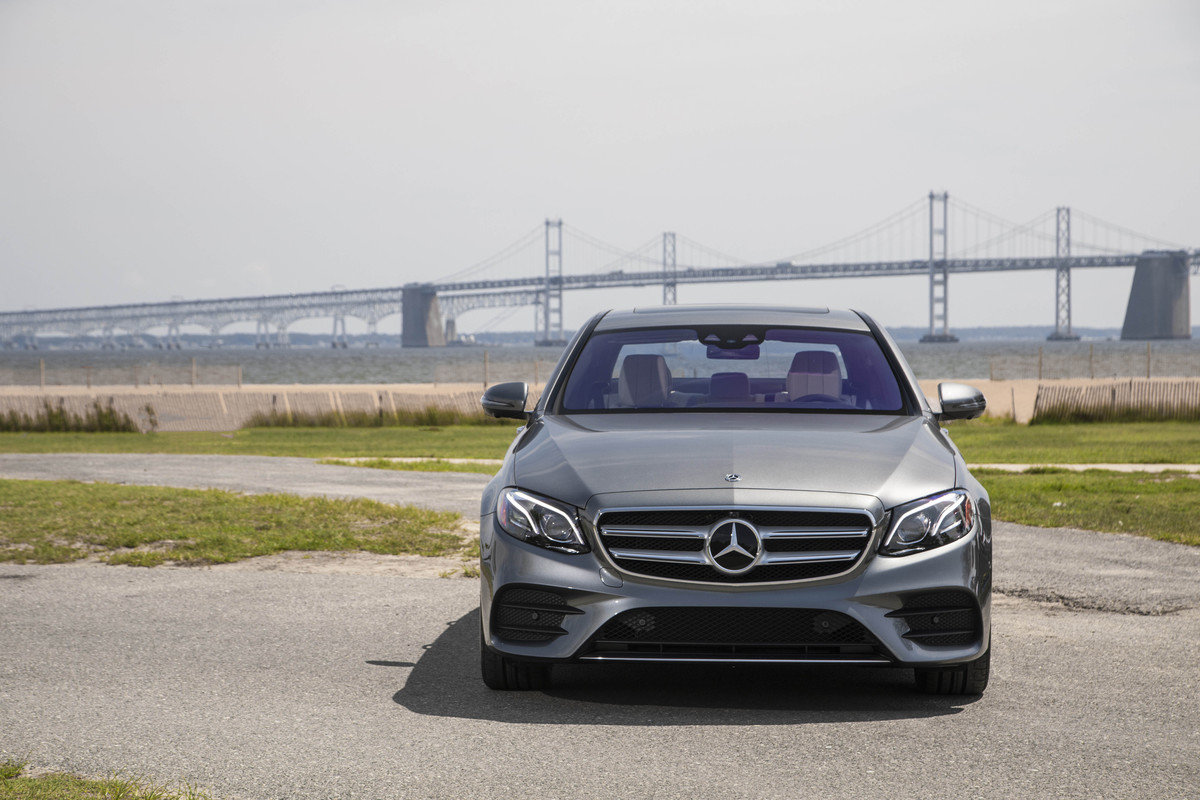 A Mercedes-Benz is a physical indulgence that gives as much or as little pleasure as your checking account allows. The 2020 E-Class starts off well-equipped in ways a $55,000 Mercedes wasn't just a few years ago, and it becomes decadent and power-drunk once you start adding options. For 2020, a new base engine joins this car's stellar design, technology, and effortless demeanor. 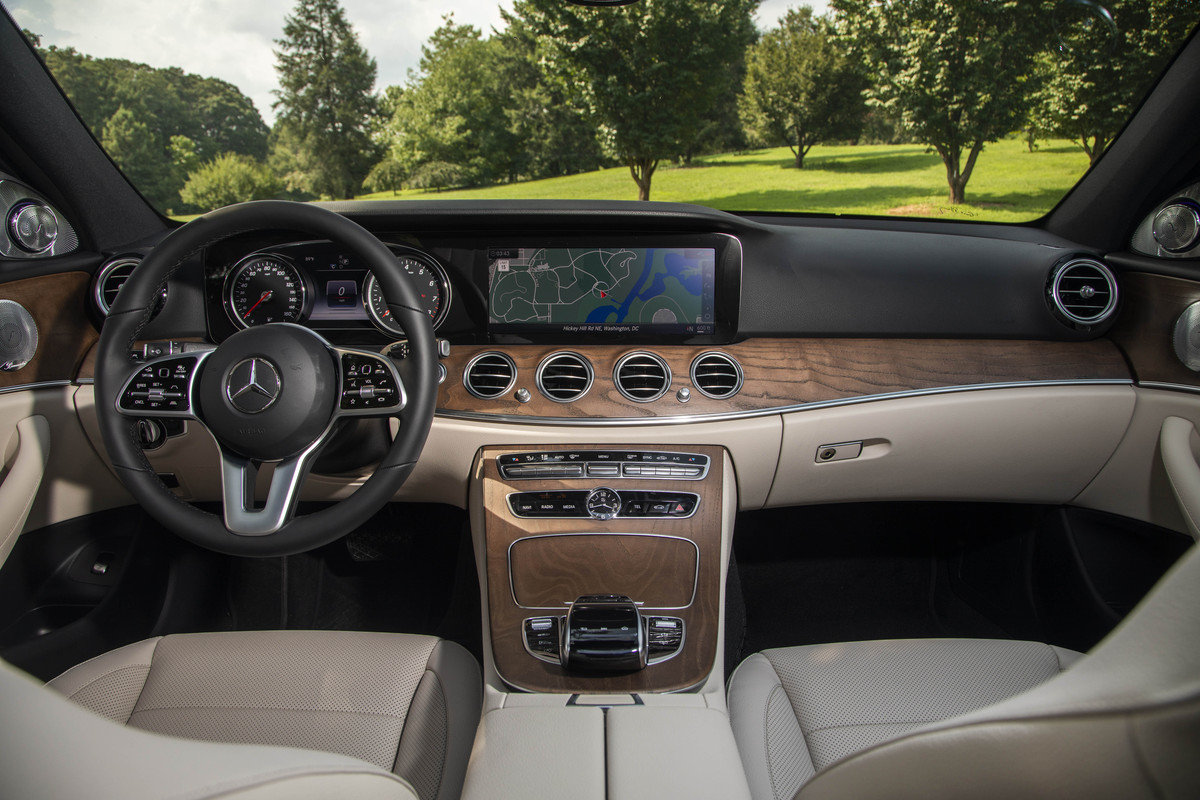 New for 2017, this E-Class is more like the E-Class from two generations ago with the rounded, smooth body. In some ways the E is too streamlined and could benefit from another edge or three (something Mercedes-Benz has addressed with a 2021 facelift) yet its resemblance to the larger S-Class and smaller C-Class makes it recognizable in a very respectable family of cars. Available in sedan, wagon, coupe, or cabriolet (convertible), the versatile design fits the conservative, unshowy nature of its buyers. It looks especially rich with the hood ornament and thin-laced chrome grille available on the sedan, which is Mercedes tradition at its finest. Else, most Es have the sport grille with a large Mercedes emblem in its center. LED lighting is delicate, from the twin running lamps that fade in when unlocking the car to the grainy film effect on the tail. The proportions, whether on the Luxury model's higher-riding suspension on 17-inch wheels or dropped on 20s with ground effects and quad exhausts, are always in a visual sweet spot.

This fluid, creaseless form works best on the cabriolet, where the contrasting soft top pulls back to reveal the sumptuous interior. Specified correctly—without the all-black cave of my E350 sedan tester—the E delights in multi-tone leathers with sweeping intersections of aluminum and deep-polished wood. Two feet of high-res digital screens stretch from behind the steering wheel across the dash. The four circular air vents smack in the center and a row of knurled silver toggles for the climate are industrial elements offsetting the touchpads and thumbpads controlling most of the car's ample features. The ambient lighting, in 64 colors with about a dozen animations, is delightful. The colors cycle to your desired mood, or maybe the vents will turn blue if you crank up the A/C. Heated armrests, massaging seats, striking colors, and smooth textures—this is a place for solitude. Even the base Mercedes-Benz E-Class, with leatherette and standard seats, feels several cuts above other cars in its segment. 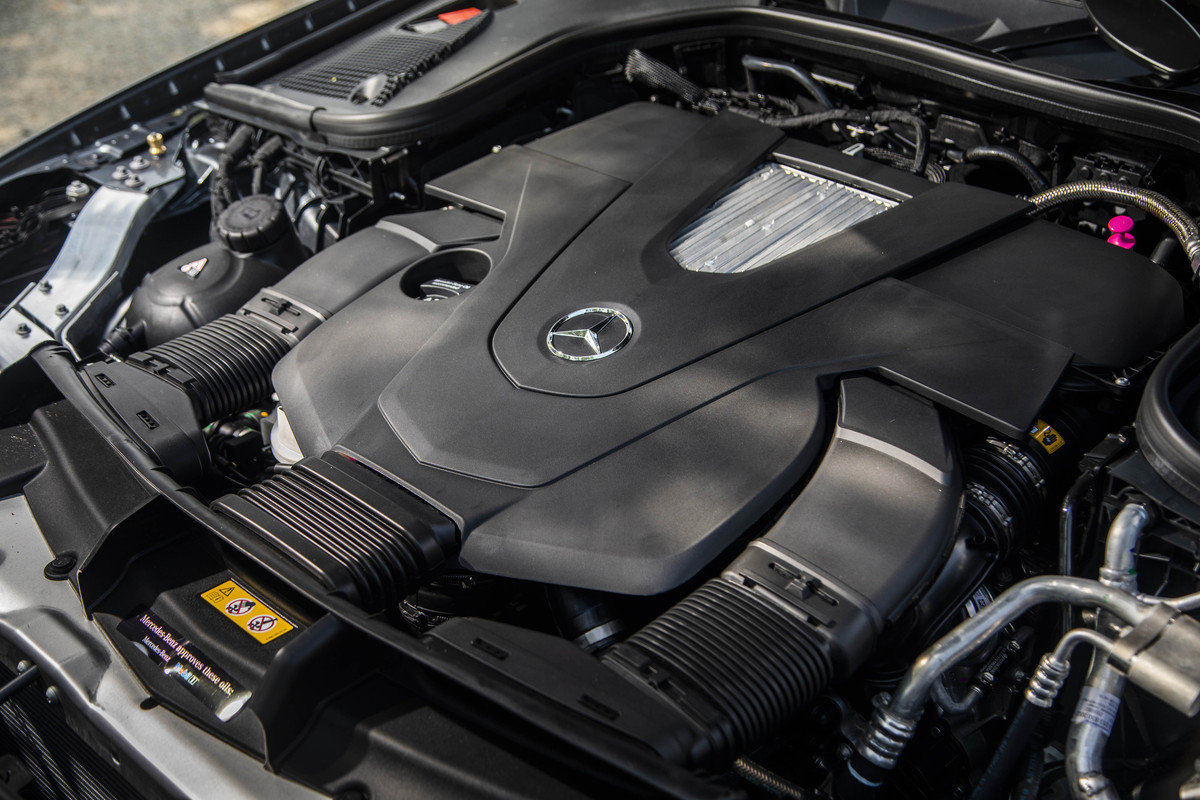 The E350 replaces the E300, and as such, the larger number denotes more power. It's still not the 3.5-liter V6 from the old E350—a car that accelerates much harder at midrange speeds—yet this new turbocharged 4-cylinder is noticeably improved from previous years. The 2.0-liter engine routes the same torque (273 pound-feet) through the same 9-speed automatic transmission, but a revised turbo with a twin-scroll design (fed by two exhaust inlets instead of one) and shorter intake runners provide quicker response than its 255-horsepower rating suggests. It's up only 14 hp from what it produced before, yet the E350 now holds its gears for longer regardless of driving mode. Noise has gone down, too. In Comfort mode, the E is like a lazy Newfoundland who'd rather lay on the porch, thank you very much, but it will jump to when coaxed. Engaging Sport and Sport+ keeps the small 4-cylinder in its power band all the time. While quick off the line, above 40 mph the momentum quickly fades. I felt uncomfortable making passing maneuvers that a Nissan Maxima or any number of cheaper family sedans could tackle. This is a heavy car and Mercedes doesn't make the best 4-cylinder engines.

That's why I'd upgrade to the E450. This 3.0-liter V6 packs another turbo for 362 hp and 369 lb-ft, which is right-sized and perfectly mannered like you'd expect a Mercedes to behave. Choosing the twin-turbo V6 is not about flat-footing the car everywhere. It's having the power when you need it, and having enough so everyday performance feels as effortless as the E's light steering and supple suspension. My car's standard setup, with passive dampers and steel springs, is plenty cushy without the optional air springs. Never does it become unsettled, and when you dive into a turn, the E hangs on with precision even though it'd like to be back on that porch snoozing.

Can't sit still? Two AMG models stiffen and sharpen the E's steady reflexes. The AMG E53 attaches an electric motor-generator to the V6 for 429 hp and 384 lb-ft. It's a hybrid setup that lets the engine shut off at highway speeds and reduces its electrical accessory load, in theory saving some fuel. In reality, with the exhaust barking obscenities and adaptive dampers set to firm, it's a real performance machine. The AMG E63 S, available on the sedan and wagon, is extreme. The 4.0-liter twin-turbo V8 belts out 603 hp and 627 lb-ft, plus the car has a drift mode so the driver can smoke the giant tires like a stunt driver. All-wheel drive (AWD) is standard across the lineup except on the E350 sedan and E450 coupe/cabriolet, where you must pay extra to upgrade from rear-wheel drive (RWD). Performance-tuned AWD, called 4Matic+, keeps more power toward the rear wheels on the AMG models.

Fuel economy is EPA-estimated between 19 to 23 mpg city and 26 to 32 highway, depending on powertrain and body style. The E63 S shows 16/23 in the lab, but don't you believe for one second it'll happen on the road. 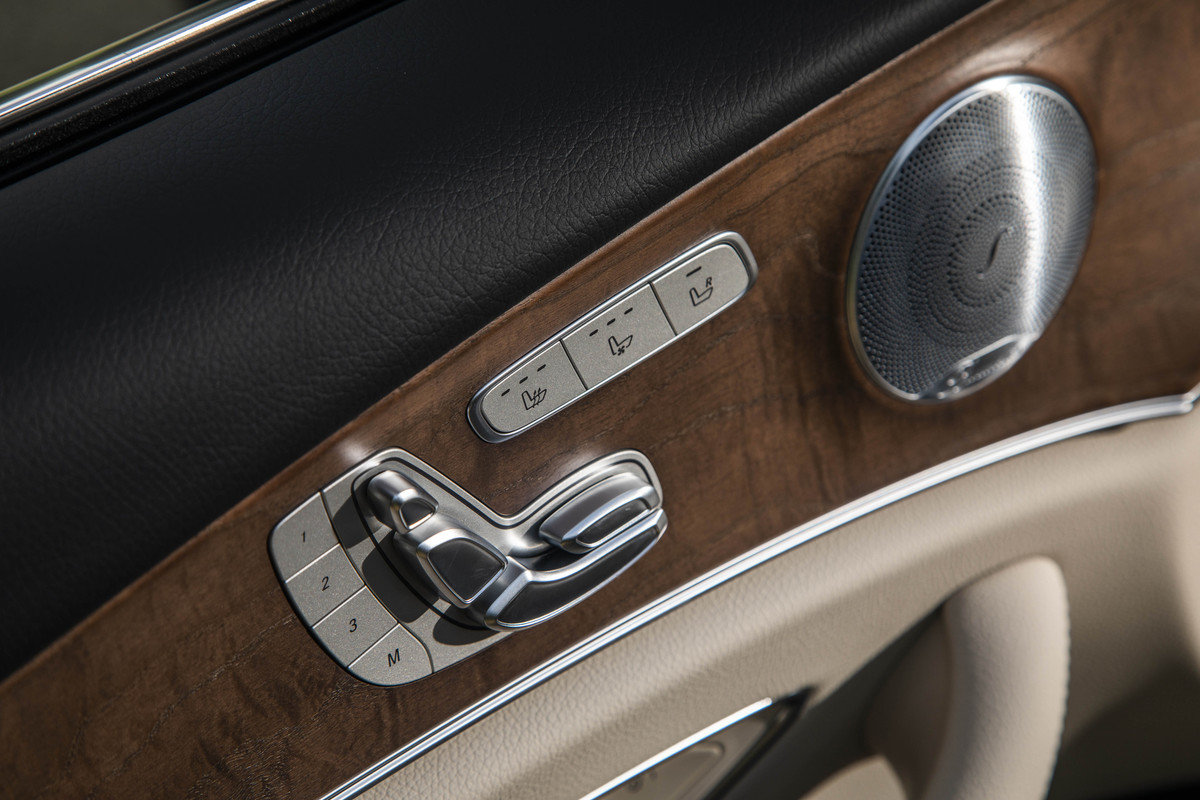 While other models like the Mercedes-Benz A-Class and GLC-Class feature the simpler, faster infotainment system called MBUX, the 2020 E-Class continues with a complicated version of COMAND that can become unwieldy on the car's huge screens. They're not touchscreens, which is the biggest demerit. Changing the audio settings, switching audio sources, adjusting the ambient lighting, and inputting addresses is a multi-step process that, to be honest, shouldn't be allowed while the car is in motion.

It's a highly distracting setup that makes sense only once you've driven a dozen Mercedes models with this system, but I realize I'm one of the few people who've actually done that. One thumbpad swipes across different gauge clusters on the instrument panel, the other scrolls through menus and submenus and submenus of submenus on the main screen. A touchpad on the center console does the same thing, and it has three more buttons on it to duplicate those functions. How about a dial underneath that twists in two directions and moves in four more? Most of the shortcut buttons on the dash for audio, car settings, and navigation don't do anything more than go to the main screen for those functions, and then it's back to all those input choices. It's overkill. And it could actually kill someone if they're that distracted while driving.

But the E-Class does feel like a functional machine when it tries, like the seat and seat climate controls mounted on the door panels, or the way the front passenger seat slides forward to make extra room for when the rear seats fold down. There's plenty of space in every dimension, and sightlines are great. When the digital dash is set up properly, the gauges are clear and everything is high-res and easy to see. The coupe has a genuinely usable rear seat, and it comes with its own rear window controls. The wagon has a rear-facing jump seat for small children, a handy feature not in vogue since Chevy Chase was on vacation with his family. A net on the front passenger footwell is helpful for water bottles that would topple over in the cupholders, which are neatly concealed by a trimmed panel that also hides the wireless charging pad. 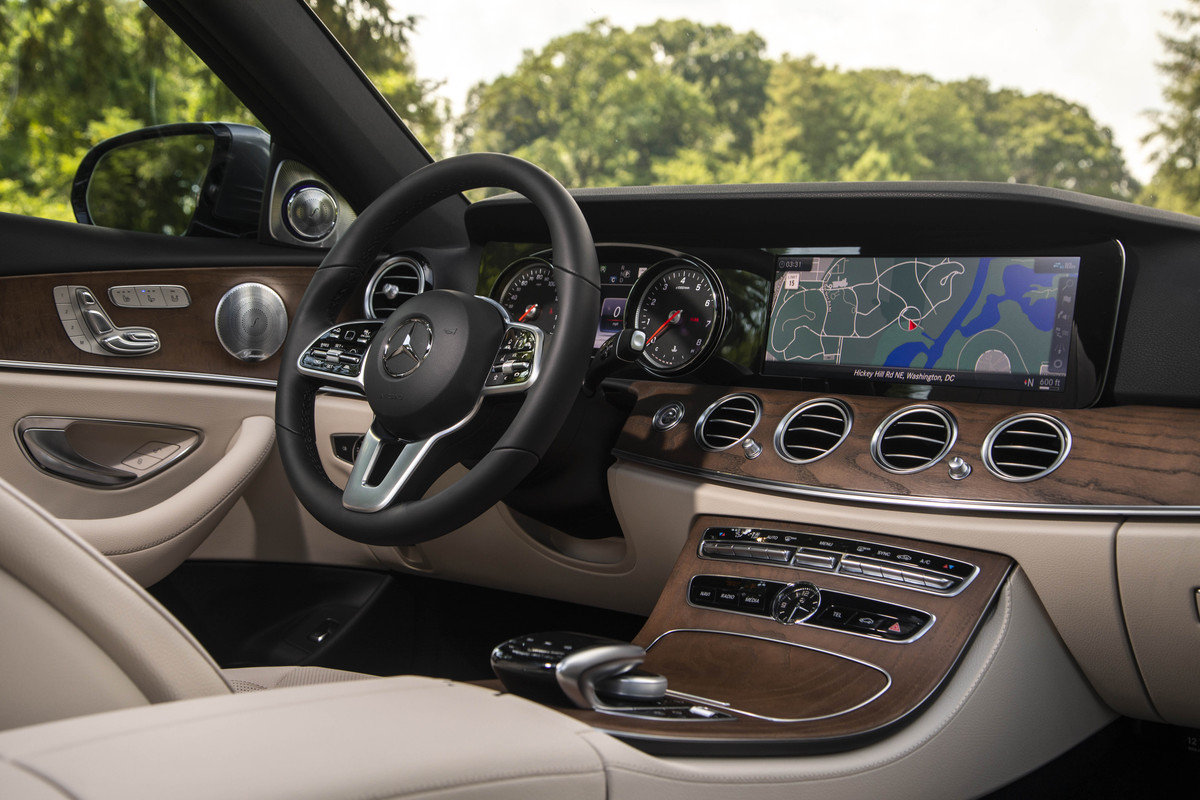 Despite how unapproachable it is at first, the tech underneath the E-Class is sensational. The semi-automated driving system can steer itself, help you steer around a stopped obstacle, change lanes by itself when you activate the turn signal, slow down for curves, and can sense people and objects closing in on it from afar, near, behind, or on the side. That list of individual features is exhaustive, but only if you're ordering the Driver Assistance Package.

Other tech-forward features include a V2X system that will send and receive messages from nearby Mercedes models about slippery roads and other hazards. The dash can be reconfigured in three designs and the left and right portions of the instrument panel each have about a half-dozen more display options, such as for maps and fuel economy. Bluetooth connectivity, Apple CarPlay, and Android Auto are standard. Multi-contour seats will engage the side bolsters before your body starts leaning. The Burmester stereo has surround-sound modes that create the sonic vibe of a nightclub. The front camera will activate automatically when you pull up to a space. Some tech is silly, like the Energizing Comfort Package that pumps perfume and prerecorded music to get you in the preset mood. It'll even change the climate settings and lighting to keep you in whatever zone Mercedes thinks you should be in. For AMG models, there's a Track Pace app that will guide you around the nearest race track, due to the high chance that could happen to an E-Class owner in suburban America. Mostly, this is a car overengineered with useful tech, with some novelties thrown in for fun. 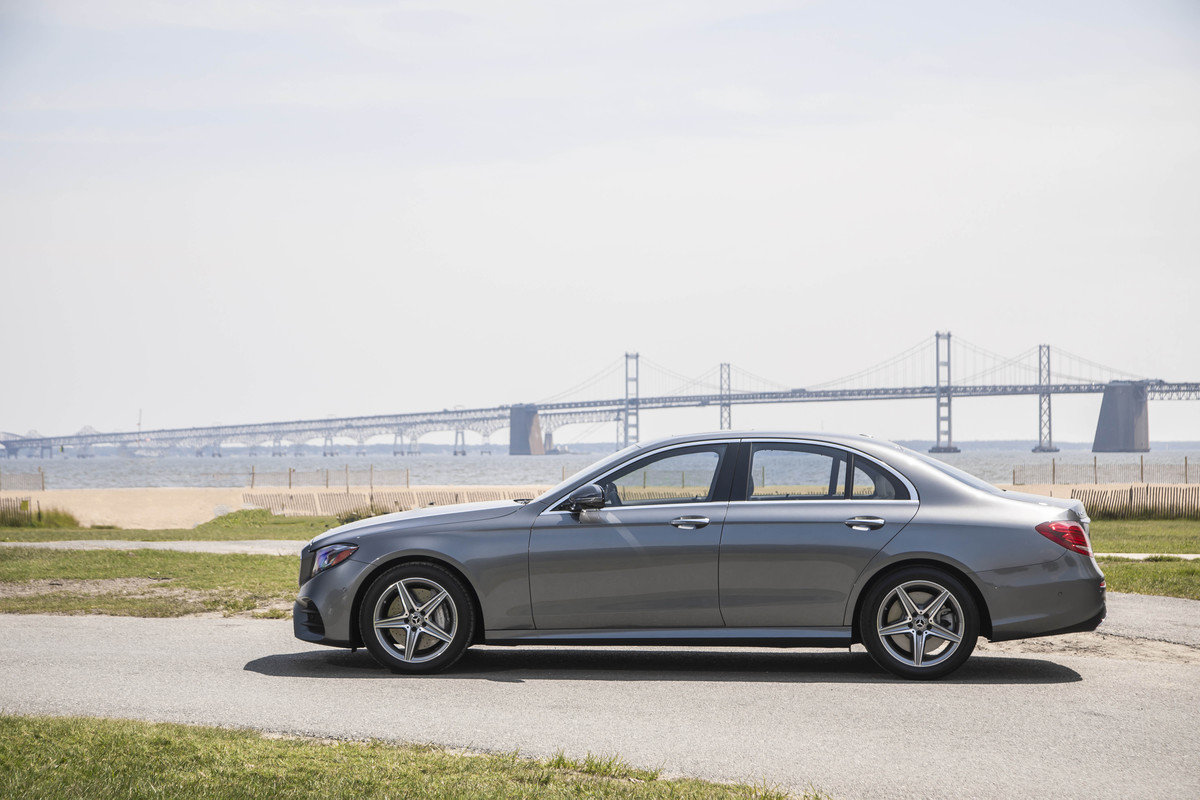 The E-Class sedan and wagon scored a 5-star overall rating and 5 stars in frontal and side crash tests and for rollover vulnerability from the National Highway Traffic Safety Administration (NHTSA). The sedan is rated a Top Safety Pick+ by the Insurance Institute for Highway Safety (IIHS) with the highest ratings in six crash tests, headlights, and collision-avoidance systems.

The coupe and cabriolet models have not been tested by IIHS or NHTSA, but given how Mercedes was the first to install a pop-up roll bar on a convertible in 1989, consider them equal. Other innovations: Pre-Safe Sound plays a "pink noise" during a crash to protect eardrums. In a side collision, the front seats instantly shift the driver or passenger from the door by inflating the side bolsters. The steering and brakes can counter the effects of surging crosswinds. Rear side airbags are available, including in the two-door models.

Some of these safety features are optional, and some are not available by any other automaker. Forward emergency braking, a driver attention monitor, and blind-spot monitoring are standard. All other driver-assist features (14 of them, in fact) are optional. 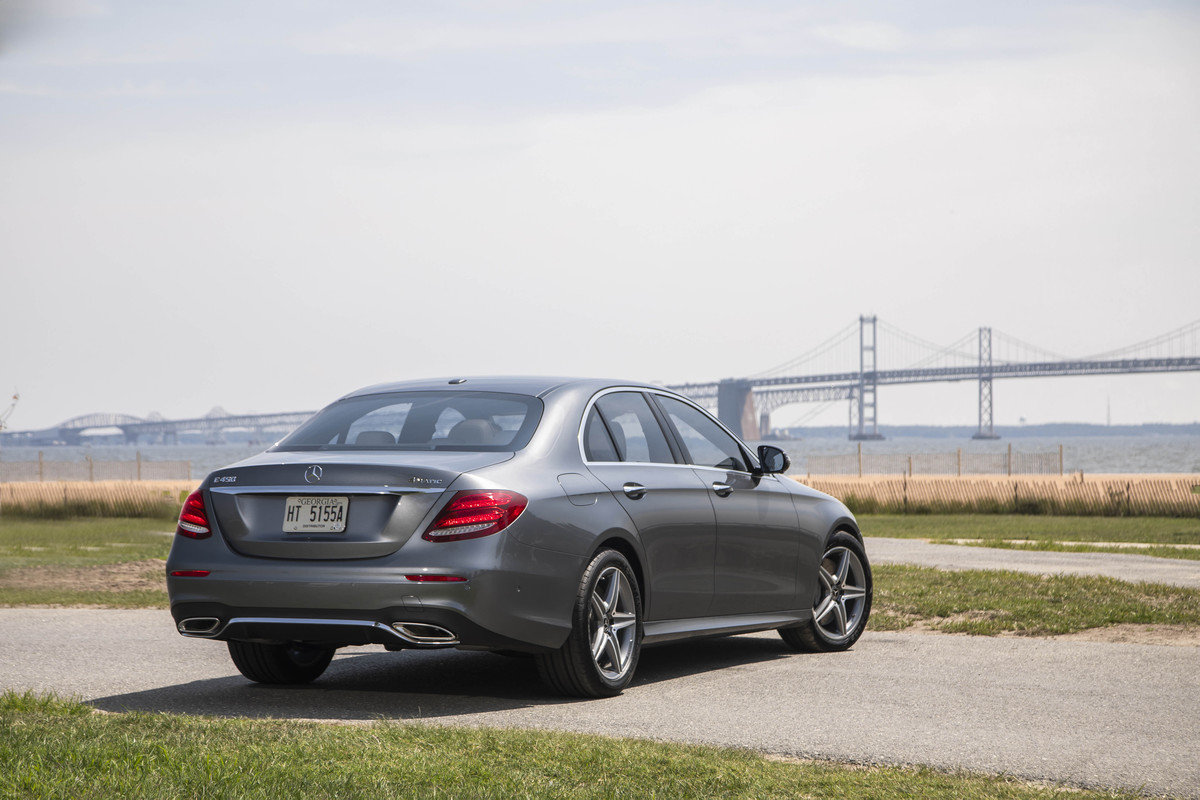 What's your take on the 2020 Mercedes-Benz E-Class?

Have you driven a 2020 Mercedes-Benz E-Class?
Rank This Car